With the release of the first expansion pack for The Sims 4, Get To Work, came the first “supernatural” life state – Aliens! Aliens have been a part of the Sims games since The Sims 2 and have been a long-time favorite of Simmers of all ages.

In each iteration of The Sims franchise, Aliens have been improved upon in both appearance and playability. In The Sims 2, Aliens were referred to as Pollination Technicians and didn’t offer much more in terms of interactions, but the novelty of possibly getting abducted and the concept of male pregnancy was enough for the time.

With The Sims 3, Aliens were given a little more substance with alien-specific social interaction as well as that nifty space-ship vehicle they could zoom around in.

Now, Aliens are back and better than ever in The Sims 4. Here I’ll highlight the new features and game play that you can access while playing as an Alien.

In addition to the standard green-hued Aliens of yore, your other-worldly Sims can now have a variety of skins tones ranging from palest white-blue to vibrant greens and rich purples. You can customize your Alien Sim further by giving him or her unique make-up and tattoos that really make them stand out from  the crowd.

Another interesting feature are the eyes that are unique to Alien Sims. They can have grey, blue, turquoise or purple eyes reminiscent of a galaxy far, far, away which is truly unique!

If all of that is just a little too, well, Alien for you, thanks to a free update, you can make your Alien try to appear as human as possible by giving them hair, human eyes and makeup as well as clothes.

Possibly the coolest feature of Aliens is the ability for them to disguise themselves as Earth-bound Sims when out among the general public. This is a new feature for Aliens with The Sims 4 and one that I wholeheartedly embrace. Although, I have found myself overly suspicious of game generated townies because there’s a decent chance he or she may be an Alien. This is an example of a townie that I discovered in game to be an Alien with his human disguise on the left, and his true Alien form on the right. 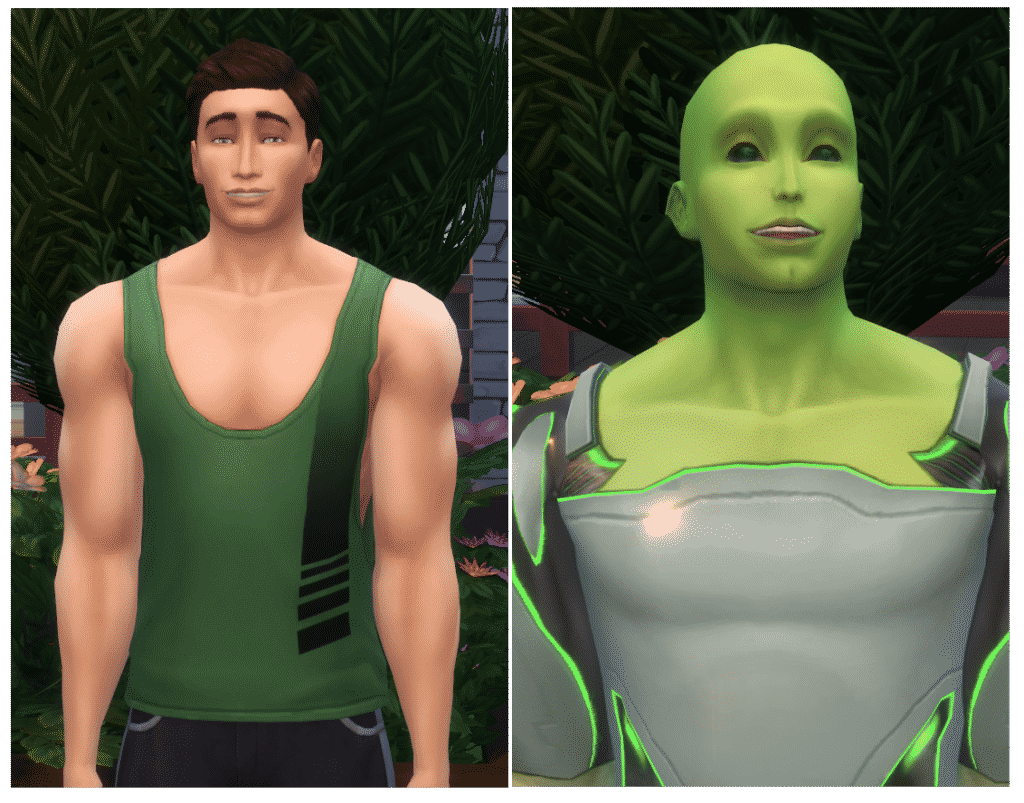 Without resorting to more…intimate…measures of discovering that a Sim is an Alien, a sign is a slight pulsating glow surrounding the Sim when he or she enters into any strong emotional state like “Very Playful” or “Very Happy” though any of the “Very” and beyond emotions will signal the glow. 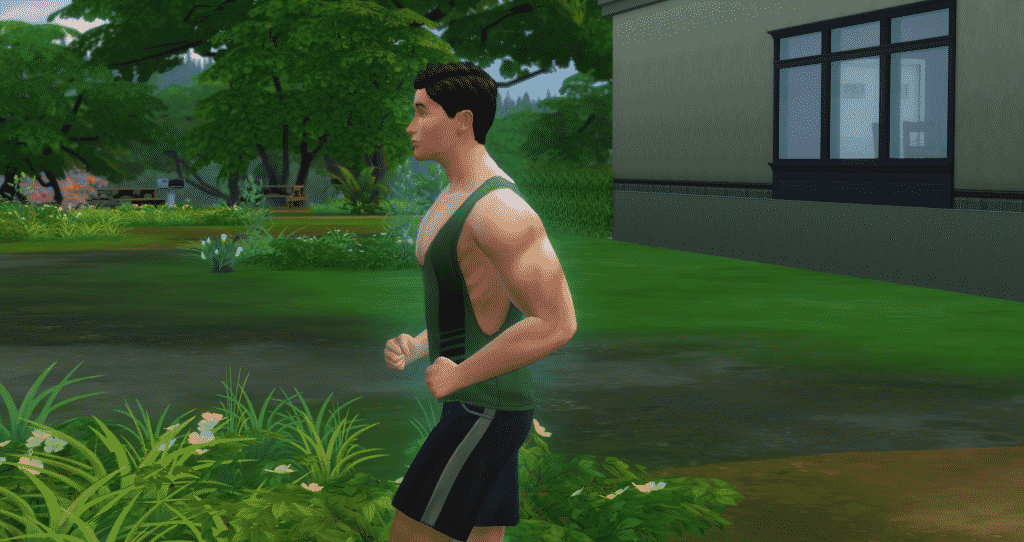 As if Aliens-in-Disguise wasn’t great enough, they even have their own home “planet” which is a secret Alien lot called Sixam. The Get To Work Expansion did a great job integrating Aliens into the game by utilizing the already existing rocket ship as a means of traveling to the Alien World Sixam. 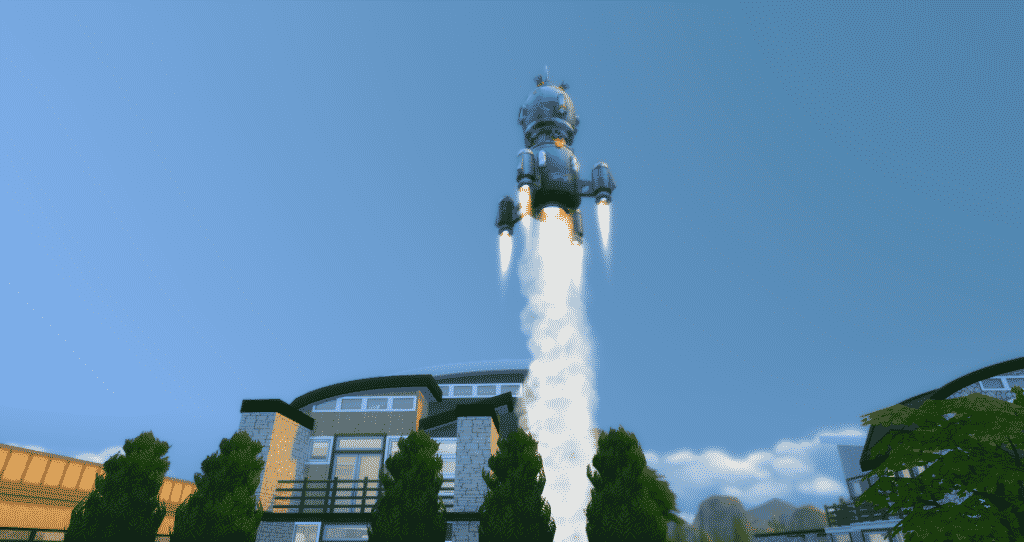 In order to get to Sixam via rocket ship, there are a few requirements. First, you need to build a rocket ship. This will cost you 4000 Simoleans just to place the pad and an additional 1000 Simoleans to build. Once you’ve finally reached level 10 of the Rocket Science Skill and built the ship, you’ll have the option to upgrade the ship by installing a Wormhole Generator. This will also cost you a pretty penny to the sum of 1000 Simoleans. That’s at a minimum 6000 Simoleans and a great deal of time (without cheating) just to travel to the lot. But it’s worth it – you’ll see in a minute. 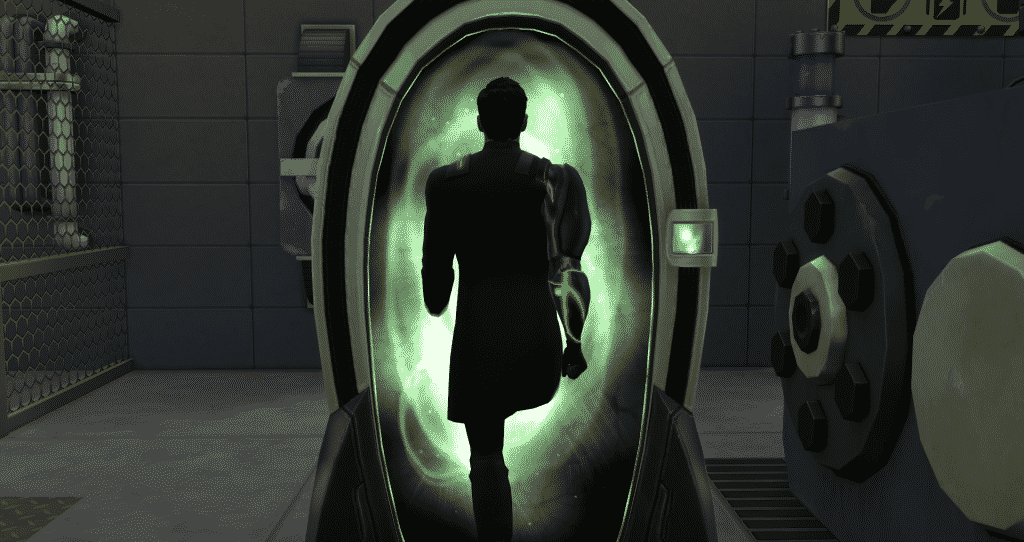 The second way of getting to Sixam is through the new Scientist career that also came with Get To Work. At level 6, if in the possession of a few metals, crystals, and elements, you can invent the Electroflux Wormhole Generator. You’re not quite there yet, though. You have to get to level 10 of the career before you can travel to the Alien World. Once you reach the top of the career, drag your Wormhole Generator back to the Invention Creator station and you can upgrade it. Now you’re ready to go!

So you’re finally on Sixam! 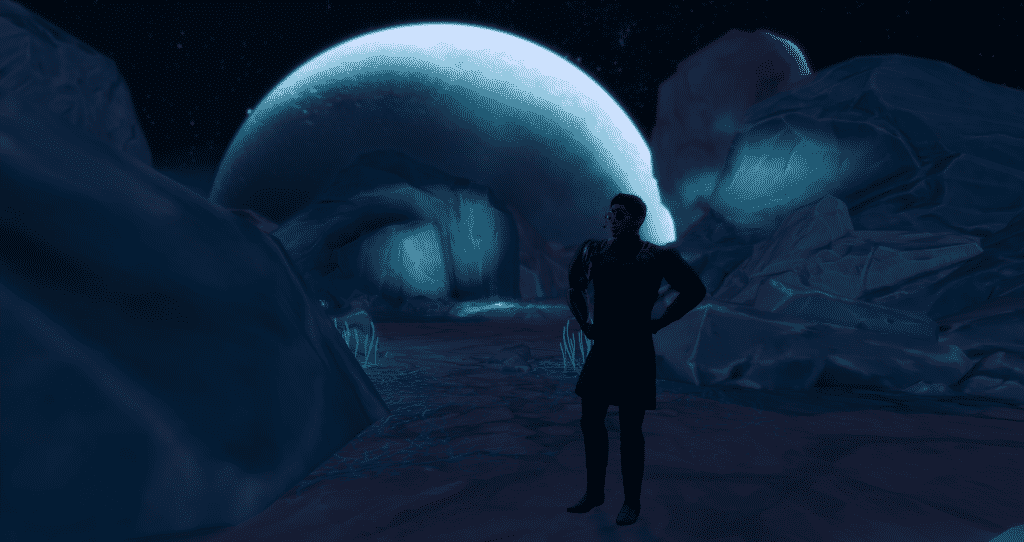 At first it may not seem like much, but hang in there! There are new collectibles to be found in the form of harvestables, geodes, and smaller Aliens. 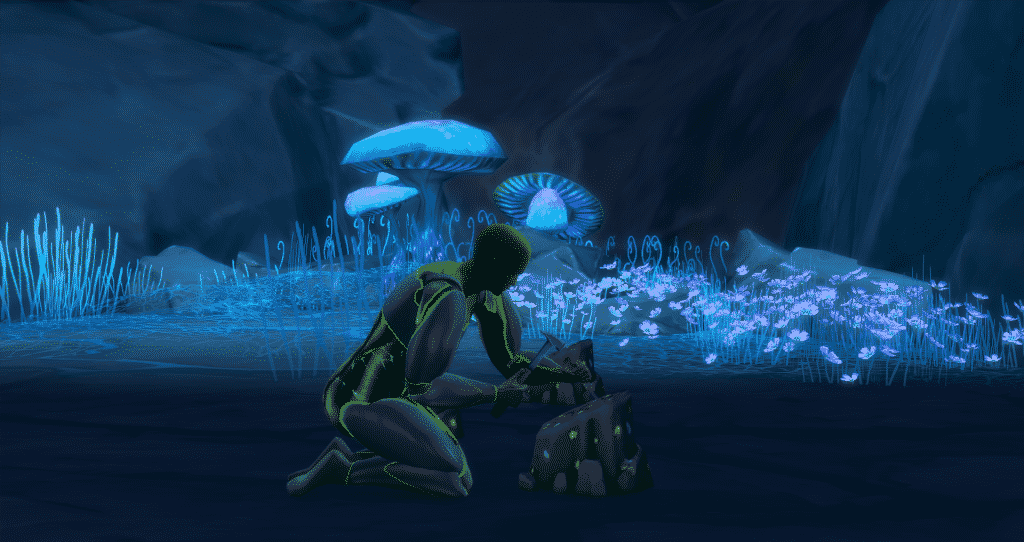 And let’s not forget the scenery itself. The world is beautiful. It’s covered in foliage that seems to have it’s own heartbeat as lights pulsate throughout the roots. 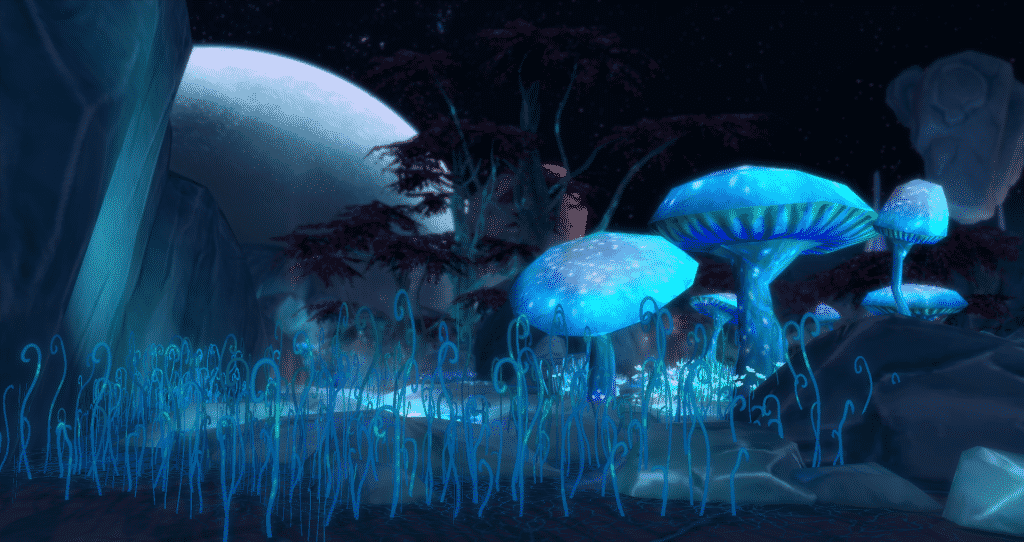 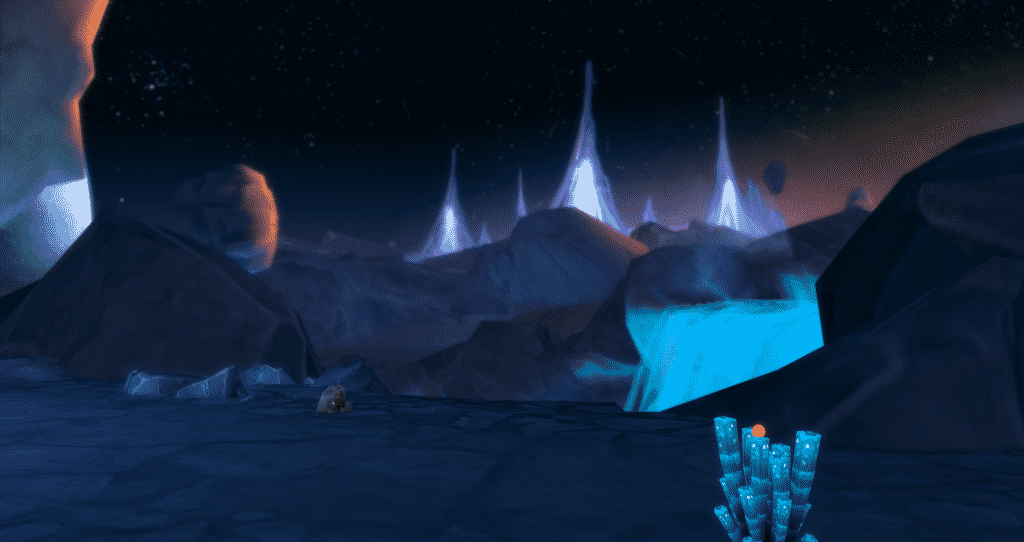 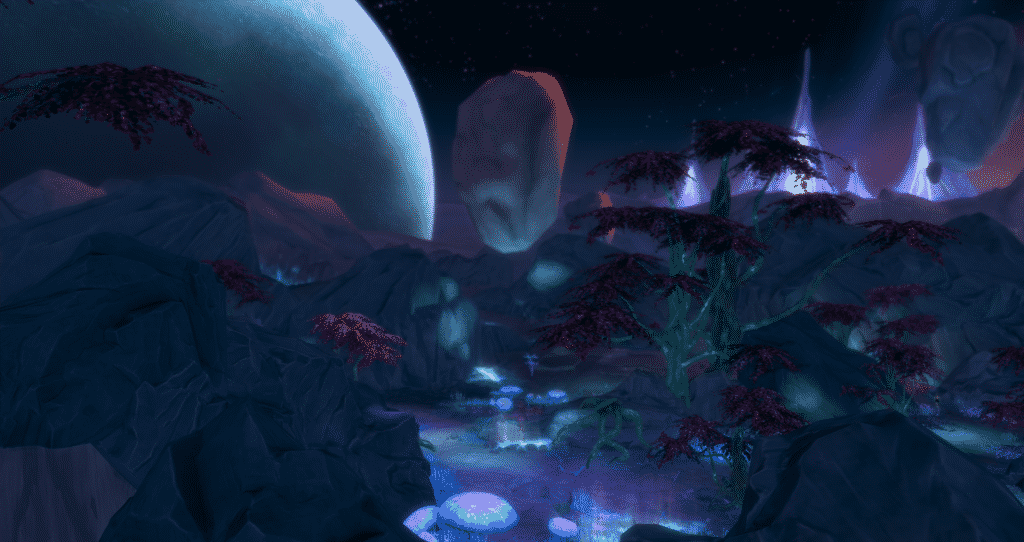 Once you’ve been on Sixam for a few minutes, you’ll start to catch glimpses of Aliens on the planet. There are spawn points at the far corners so it takes a little while for them to come into view. Note: when travelling to Sixam, it will add a good amount (~15-20) of single Alien Sims to the population. Feel free to delete them from the Manage Worlds option. The game will always spawn more if you go back! 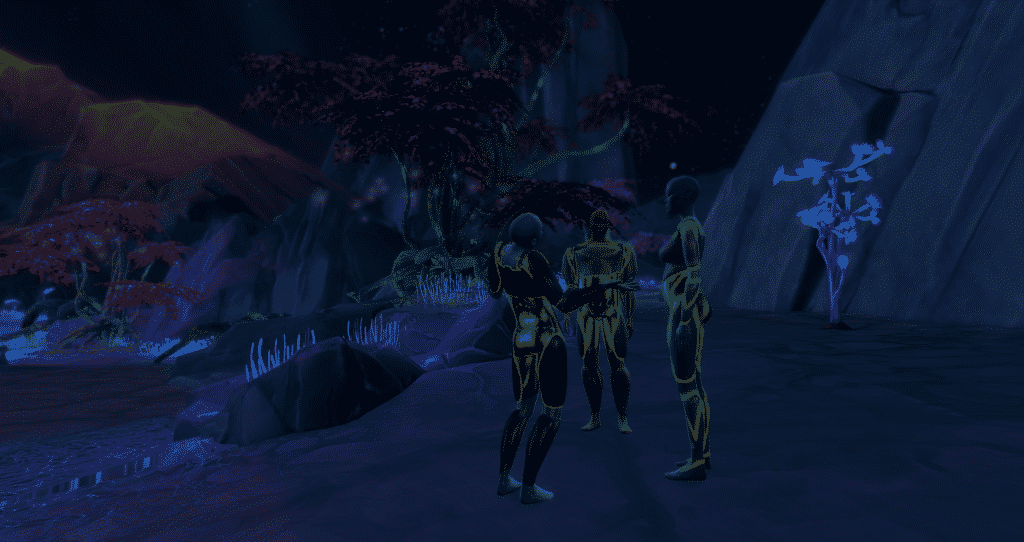 If your Sim is in the Scientist career, a daily task may be to travel to Sixam for a special event. Let’s just say the Aliens have been doing their research and like to party! 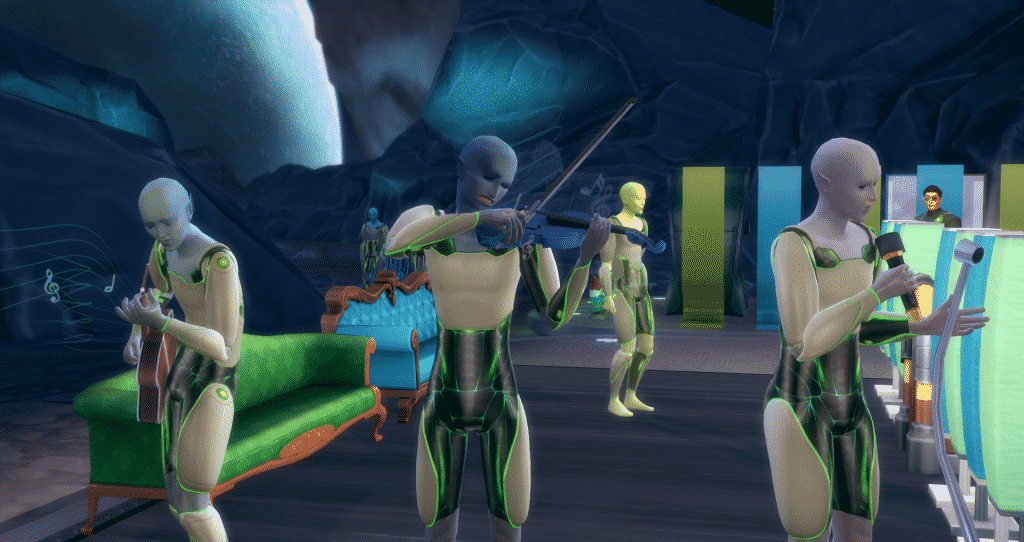 What’s the fun in having Aliens without the chance to get abducted? Fret not, because your Sims can, and maybe will, get abducted by Aliens. If a particular Sim is the target of an abduction, they will stop whatever it is they are doing to go outside and investigate a strange light. Abductions will only happen at night, so anywhere between 9 pm and 5 am. 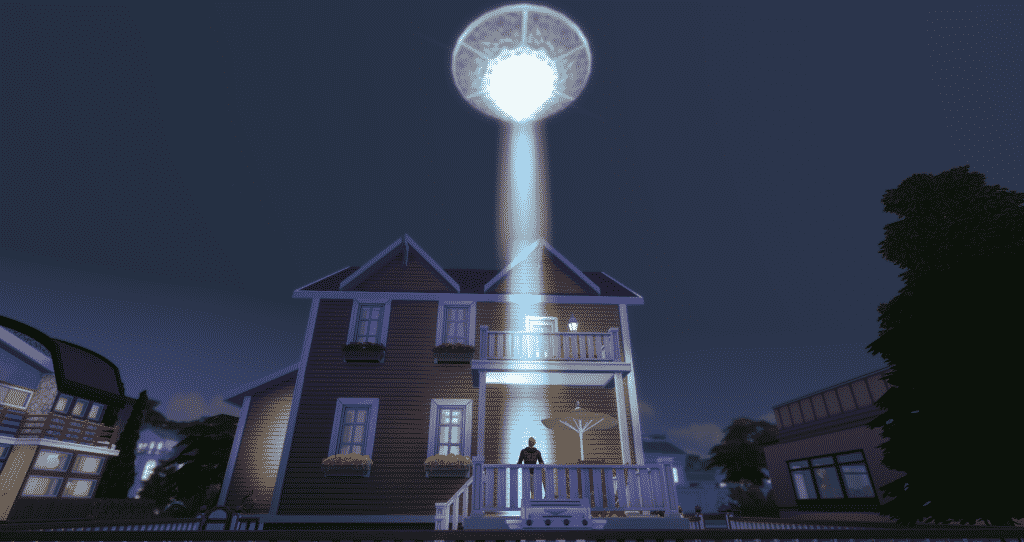 An abduction lasts a few Sim hours and usually your Sim will be returned a little dazed but generally unharmed. Sims with the Geek trait will get a positive moodlet from getting abducted.

If your Sim being abducted happens to be a human male, then there’s a decent chance he’ll come back with a little surprise. 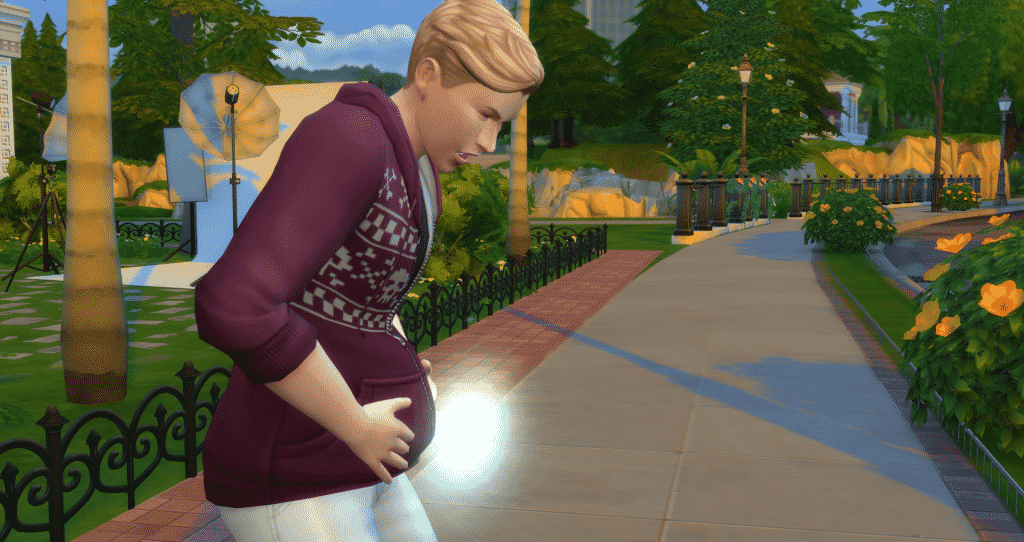 If he is pregnant, he will have the same confetti-tossing moment that female Sims get when they discover they are excpecting. However, he will not be able to take a pregnancy test. He will simply complain of a tummy ache. 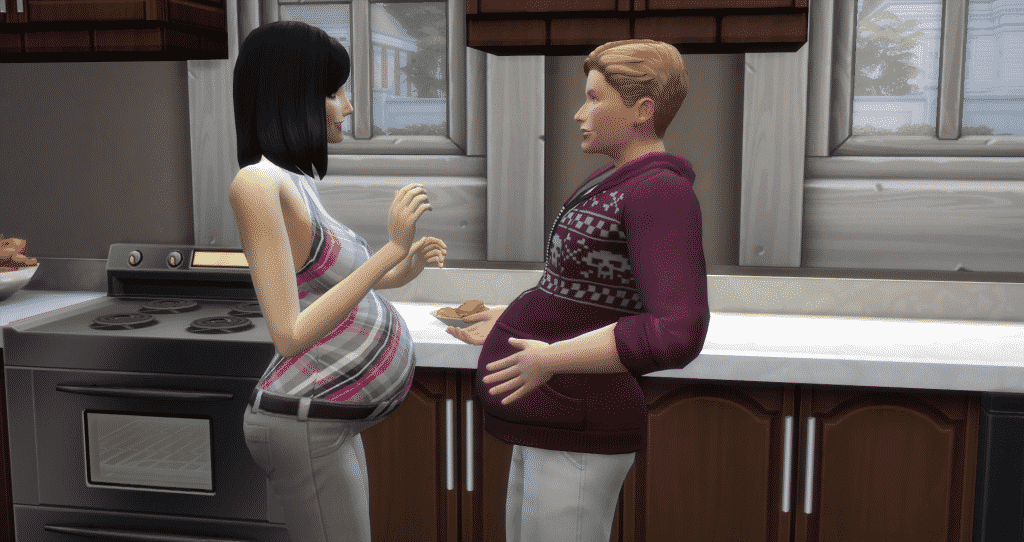 The pregnant male Sim will go into labor like normal and can deliver the baby at home or at the hospital. 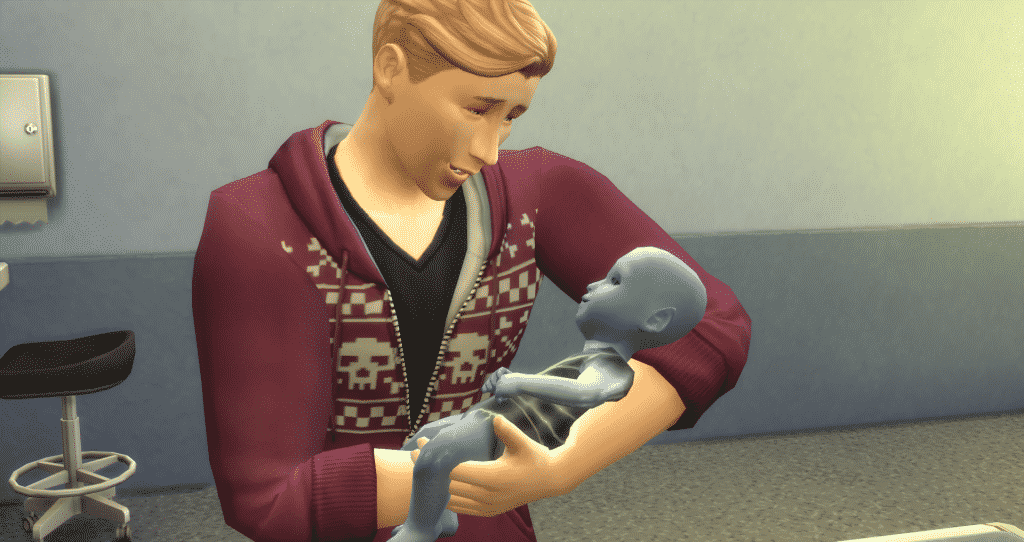 Once you’ve had the bundle of joy, you have the option of keeping it or returning it to it’s home world, an option that can be found when clicking on the bassinet. Babies resulting from an abduction have their own bassinet that also has the “It’s so…cute?” interaction which was a nice touch. 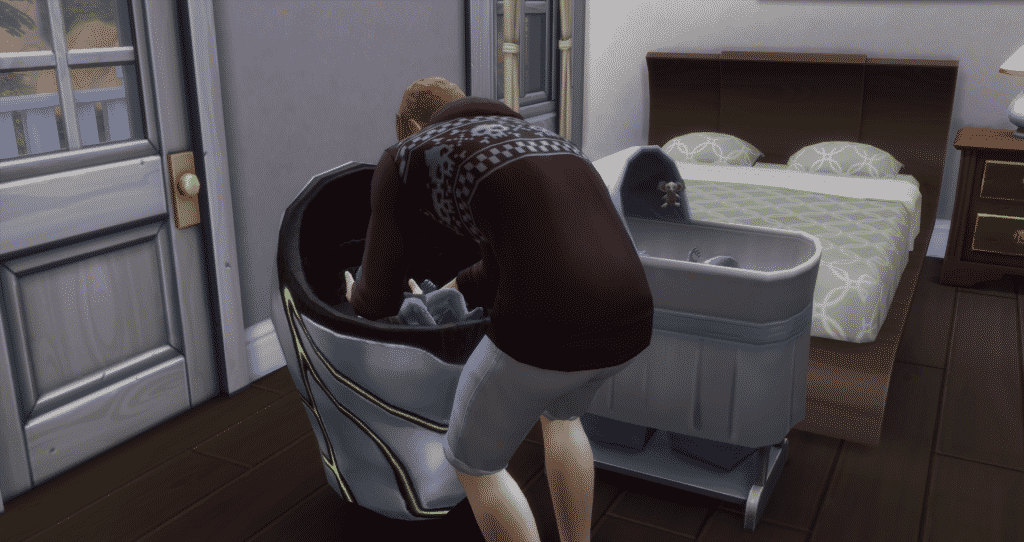 Non-Alien male Sims also run the risk of getting pregnant if they Try For Baby with a female Alien. Male Alien Sims cannot get pregnant.

Sim-Alien hybrids result from Non-Alien and Alien Sims trying for baby. These resulting children are unique because they have the skin tone of an Alien but will have hair and normal eyes. Hybrid Aliens also cannot disguise themselves nor do they have any of the Alien social interactions. 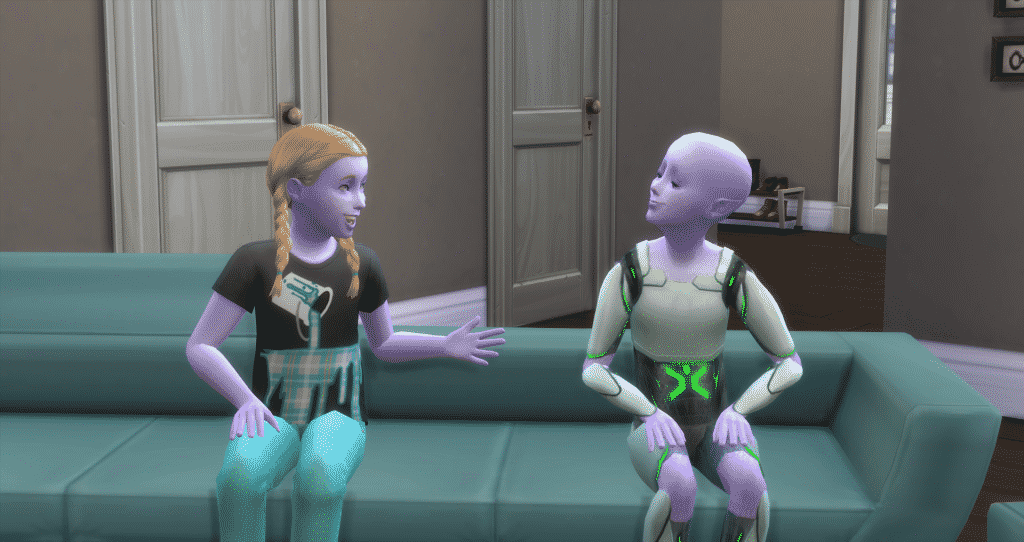 There are several new social interactions that Aliens can perform. Some of the interactions require Brain Power and your Alien will need a cool down period before performing more of those interactions.

Empathize (Friendly) – Allows your Alien to feel what the target Sim is feeling. 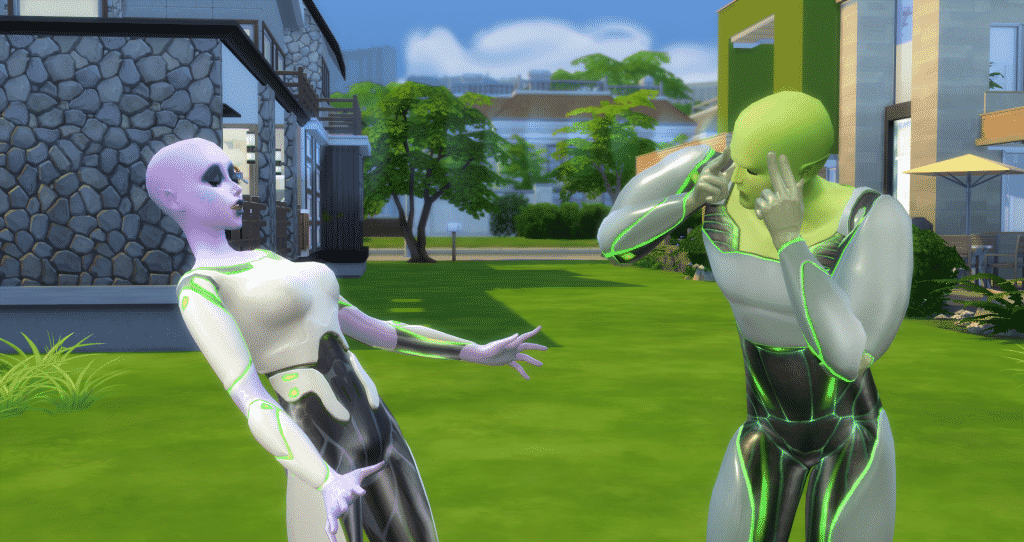 Analyze Personality (Friendly) – Learn all of the target Sim’s traits all at once.

Erase Memory (Mischief) – The target Sim will immediately forget your Alien allowing plenty of time to disguise and re-introduce yourself without the awkwardness of discovering their secret. 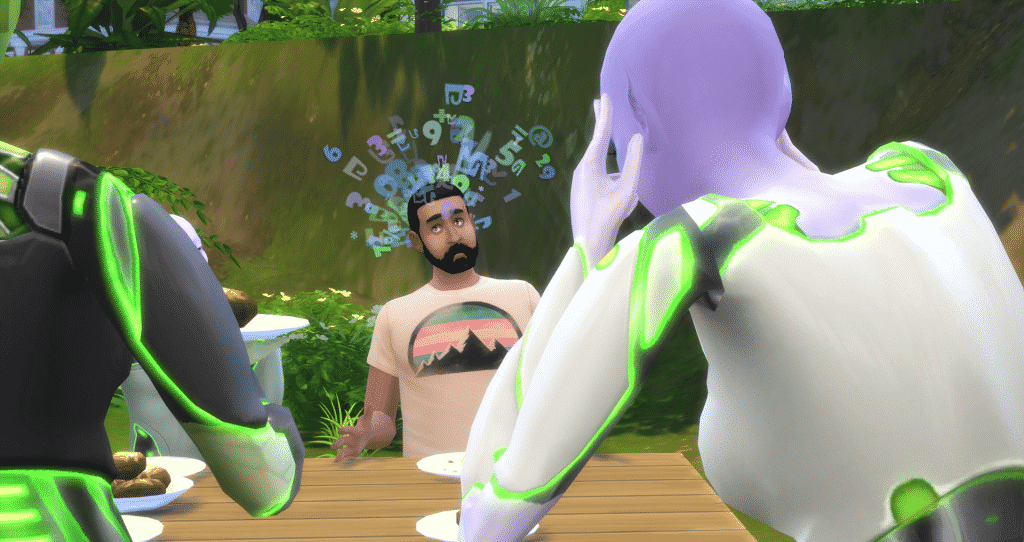 Scare with Probe – This is more for entertainment value, but your Alien Sim whips out a device that reveals various comical “probes” such as a blender or duck-on-a-stick. 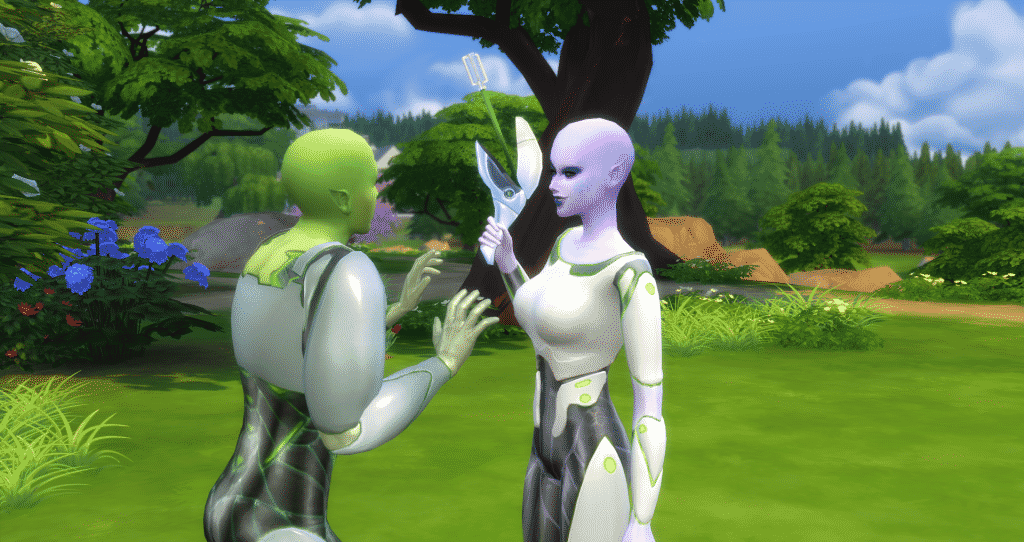 There are also several Alien-specific socials such as talking about human food or discussing weird atmospheric pressure. If you come across another Alien, the two can perform a secret handshake!

What are some fun things you’ve discovered with your Alien Sims?

I'm a Sims lover, a Biochemist, a mom and wife. I enjoy writing stories and narrating the goings on of my Sims via my blog, Sims N' Stuff with SimmerDownSouth. I'm trying my hand at Let's Plays and Challenges on My YouTube Channel.