When people I know ask me what Sims 4 is like I have many ways to describe how amazing it is, but my main thing to say is ‘Imagine Sims 1 HD with more stuff’. Not a very technical way of describing one of the best games EVER, but I feel like the Sims 4 simplicity compared to Sims 3 really does it justice. I actually feel like I haven’t played Sims 3 properly in years, but it’s literally only be a year. As I installed more and more Sims 3 EP’s my laptop became less and less responsive because of the constant open world that it had, I love that you have to load every location in Sims 4 separately, it means I can have the graphics high and zero lag.

I’ve been playing The Sims since the Deluxe Edition in 2002 and I was there to witness the amazing step to Sims 2, I had never played a game that used so much RAM and Hard Drive space, the 1st computer I tried to install it on was Windows 98 and didn’t have a good enough graphics card, at this point I was worrying because in my hand I was holding an amazing MASSIVE game that required FOUR DISCS. (Luckily I was eventually allowed to install it on the family computer) I feel that Sims 2 was a totally new game, nothing will ever beat the way the aesthetics changed from The Sims up to Sims 2 (I will also forever wait for the Tombstone of Life and Death to be added to the Sims 4 or any Sims game in the future)

Anyway, back to my original point. There are many similarities between the 2 games. (My list may not seem like much, but if you’ve played the original Sims you would notice the similarities straight away just with the world sizes) After searching the internet for inspiration on this article, I really can’t believe there are hardly any people noticing these similarities and doing their own comparisons.

These past couple of days I thought I had a good excuse to play Sims 1 and 4 at the same time so that I could show you a recent, very opinionated and real comparison of the 2 games. I have been playing Sims 1 on my laptop and Sims 4 on my computer so that I can have them side by side, to show this comparison without it being inconistant I have created the same Sims and the same house on each game.

It hasn’t been hard to try to keep everything similar, even when it came to creating my Sims, in Sims 1 you choose your characters traits by slighting adjusting their characteristics (Just like Sims 2) and it was fortunate for me that those characteristics in Sims 1 actually feature as traits in Sims 4, keeping the characters appearance was very simple because of the amount of choice in Sims 4 that I could manipulate around the full body outfits in Sims 1. When it came to creating the house this was again something very easy to keep similar because everything that’s included in Sims 4, but the similarities I mainly wanted to look at were the prices of building each of these houses. The Sims 4 cost was 7,962 and the Sims 1 cost was 9,208, there were a few extra things I had to buy in Sims 1 like a phone and burglar alarm, but other than that the only difference I see right now is the graphics.

In day one on each game I’ve tried to focus on finding my Sims jobs and building up their relationships. I found the male Sims jobs in each games equivalent – Medicine Career and Doctor Career, Sims 1 pays 200 a day and Sims 4 pays 18 p/hour, so far the pay in Sims 1 is better in Sims 4 my character would have to work 11 hours to make 200 simoleons a day.

I found it very easy for my Sims to become best friends in Sims 4, it actually only took 4 Sims hours, but in Sims 1 after 3 hours they decided they didn’t actually want to talk to each other anymore because they grew hungry, after I fed them up it took them another 3 hours to become friends. Meanwhile my Sims 4 characters had already had their 1st kiss and 1st denied proposal – oops. This denied proposal is actually where my experiment started to become quite inconsistent, my Sims 4 Sims decided to have Woohoo when I wasn’t watching the game (I didn’t think this was possible) and then I remembered I have the mod ‘Risky Woohoo’ and now my Sims is pregnant *sigh*. Sims 1 being slightly more positive, after a denied kiss and a slap away they eventually fell in love after 6 sim hours – phew.

The main problems I have right now with Sims 4 is how much they wake up at night, no prank phone calls and compared to Sims 1 the days and nights seem to last FOREVER. Whilst the games are very similar it’s great to be able to play them both, it’s nice to have fast & simple and it’s also nice to have a detailed game too.

In day 2 I sent my Sims to work and it was actually quite boring, neither got promotions (work performance meter didn’t even raise). The job promotions are actually what I’m really fond of Sims 2 for, if you’ve got all the required skills and friends you got a promotion a day (nearly). Whilst the men were at work I got the woman to gain a Creativity skill, it took my Sims 1 hour 4 minutes to gain her skill in Sims 1 and it took my Sims 4 Sim 1 hour 10 minutes. I’ve been finding Sims 1 very hard to maintain all levels, everything increases fast but that also means everything decreases fast, although that does help for a quick paced game, but unfortunately my Sims relationship halved in just ONE DAY and that obviously meant they couldn’t sleep in the same bed (I actually think of the Sims 1 Sims like hormonal teenagers, one minute they’re happy talking about interests and the next you’ve said something to offend them because you wanted to talk about cats or have a friendly hug) Throughout this work day I did find myself speeding through Sims 4 a lot and leaving it to free will because the day was just too long for what I wanted to do, this does make me wish that the speed in Sims 4 did go at least 1 faster.

Now, because I got bored with having my families working I decided that day 3 would be the day where I compare how easy (or difficult) it is to ruin their little Sim lives *evil laugh*. In Sims 1 it was almost too easy to kill them, I moved all the litter into their house and I left them with only a phone. My male actually called the Pizza Guy 20 times, unfortunately for my Sim I did delete the front door. I did find it very funny that things on the outside world were still effecting them, a skunk appeared to really annoy them and so did the cockroaches, and once I put them in separate rooms my female Sim kept wanting to ‘Nag’ the male. I feel like that’s what would happen in real life, I would still try everything I could to blame my Husband for this terrible situation. Ha. 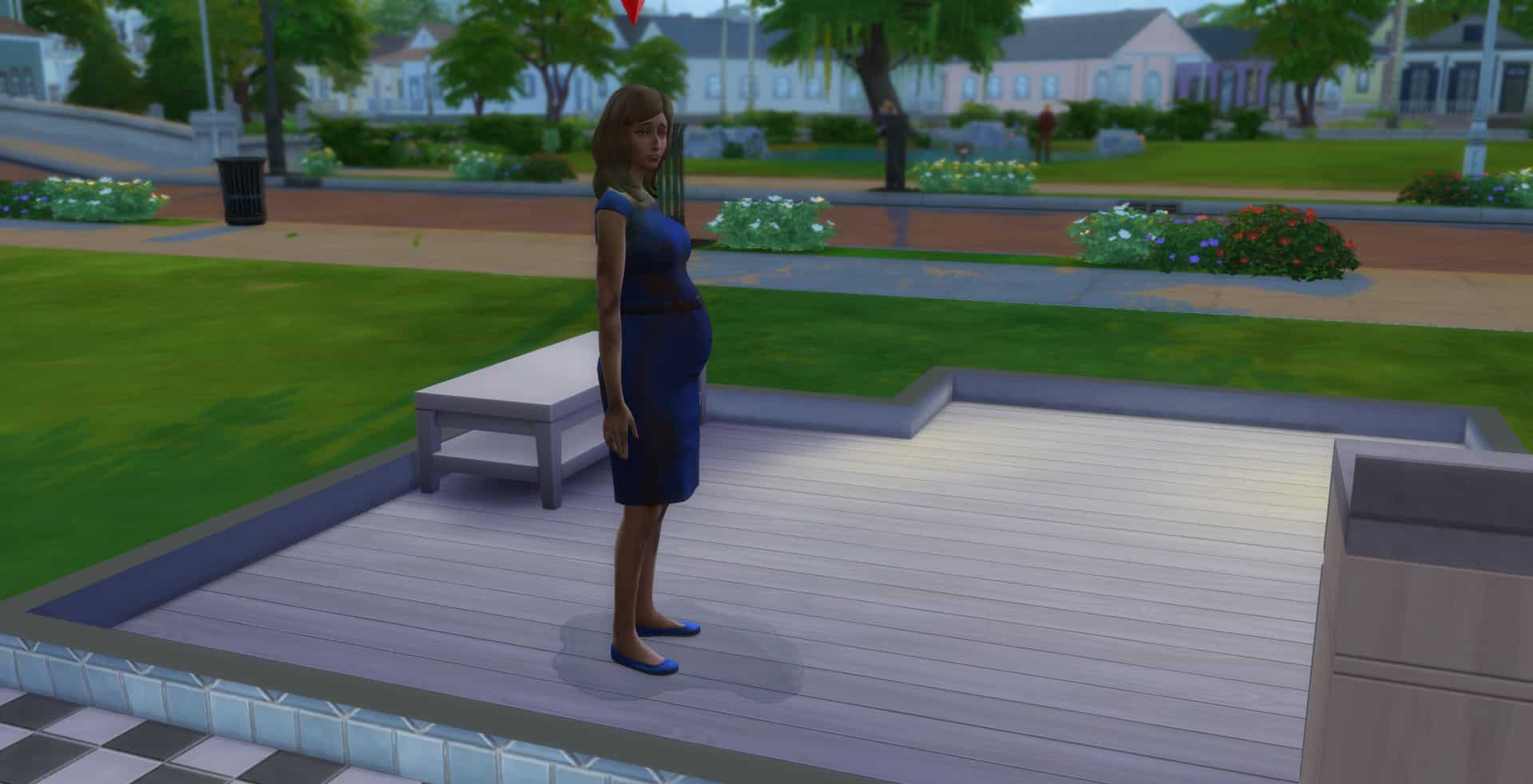 After a few days of trying to kill my Sims 4 Sims I actually gave up, My female was so close to dying of starvation and I didn’t feel bad that she was heavily pregnant, but unfortunately it did seem like the Sims 4 creators felt bad about killing off pregnant sims and somehow she found some food in her pocketless dress, how very convenient…

In conclusion to this very long comparison article, If you’ve never played The Sims and you own a Windows PC I strongly advise that you try playing it, it’s very easy-going and it’s amazing to see how all the Sims games started and how far they’ve been developed. The one thing I am thankful that they decided to scrap from The Sims is the ‘Environment’ need, this would ruin your Sim’s entire day just because there was a puddle somewhere in your garden, or 1 unclean plate left out.

Hi, my name is Olivia and I’m a 22 year old Photography student from England. I’ve been playing Sims since around 2003, I’m obsessed with Disney and I love escaping reality with music & video games. If I was a Sim my traits would be Creative, Lazy and Family-Oriented and my aspiration would be my real life aspiration - Big Happy Family :)