It’s that time again! Time for our weekly segment highlighting just some of the best our amazing Sims Community Facebook group has to offer! Every week, we’ll be sharing some great stories and screenshots with you from the Facebook group that really made us go WOW!

Let’s check out some of this week’s highlights.

“The continuing story of Charlotte. After a few weeks of wedded bliss she caught her husband Kel cheating with an ex, Candy behr. Charlotte was heart broken and angry but agreed to stay together for Auron. Kel on the other hand wanted nothing more from the marriage and left with their son to be with Candy.

Charlotte cried for a day or so but whilst visiting Forgotten hollow called in and confided in her old freind Lillith Vatore who convinced Charlotte to become like her, a vampire. It didnt take much persuading and Charlotte agreed. After her transformation she felt different, alive if that made sense? and found solice in her vampire lifestyle which she took too quickly thanks to Lilliths help.” – Charlie D.

Why We Love It: If you’ll remember in one of our previous weekly columns, Charlotte was just beginning her life of wedded bliss with new husband, Kel. Sadly, their marriage didn’t work out, but it looks like Charlotte is finding a new sense of independence in her new friends and her new lifestyle. We applaud Charlie for her dramatic storytelling that takes a turn towards the supernatural and can’t wait to see Charlotte grow into her new powers.

“Mesmer has the Public Enemy Aspiration, so one of her goals in life is to make lots of enemies. When a teenager walked by wearing a formal cream coat with a necktie and a pair of shorts, I sent Mesmer to be mean to him—because [plumbob] that dude.

Mesmer worked him over. Insulted him. Jeered at him. Splashed a drink in his face. Implied that his mother is a llama. The works. Of course, as he was getting worked up, Mesmer got angry too. And with her Insane trait, she suddenly received an extra Angry moodlet out of nowhere because she is emotionally unstable, and the combined rage gave her a heart attack. She died on the spot.

Her vampire grandmother, Whisper, bribed Death with a Death Flower to bring her back, but because she came back with the same Enraged emotional state, she died again. TWO MORE TIMES.

And that [plumbob] wearing shorts? He was there the whole time, celebrating as he witnessed his newfound enemy kick the bucket three times. His name is Camron Contreras. That’s him on the right, fist-pumping away happily.

I hate that Sim so much. #JustSimThings” – Kok W. (submitted by Khoo C. on the author’s behalf) 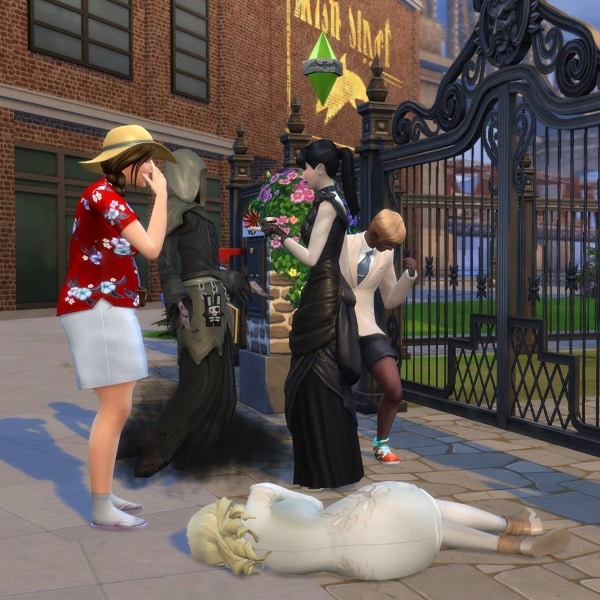 Why We Love It: The Sims 4’s slogan is Weirder Stories and that’s exactly what’s being served up here. The idea of a Sim being so angry their heart gives out on them, being brought back to life by a death flower only to immediately die two more times while their enemy laughs at their misfortune is absolutely hysterical. You just can’t get that kind of bizarre hilarity anywhere else but The Sims.

“The Saturdays apartment Halloween party went VERY well. Plenty of guests showed up in all manner of costumes. Lights and decor really added to the ambiance of the night. Minor buzz kill when their neighbour Cady pounded on the front door to complain about the noise.

But they invited her in and she soon got blathered drunk and took the sour puss off her grumpy face to get down and dirty on the dance floor.

Why We Love It: Trevor really got into the spirit of one of the best holidays ever (in this writer’s humble opinion) with his Sims and we are digging it! It’s clear he put a lot of effort into setting the right atmosphere for his party and his attention to detail paid off! It looks like everyone is having a great time mingling and showing off their costumes. The custom decorations are a real scream but we think the most spook-tacular thing just might be the eerie green lighting and purple fireplace flames.

While I love my Cyanide household, I’ve grown attached to Arnav too. Even if he doesn’t do any cleaning as the house gets dirtier by the Sim hour. He may have a vibrant extra-curricular life, but I started thinking about giving him a family.

First, I used MCCC cheats to mark him for marriage by Wednesday (Sim time). Several Wednesdays passed. He was still single.

I still didn’t give up hope on letting Arnav explore his sexuality autonomously with the help of MCCC. But I really wanted to see little Srivastavas in his lavish apartment, and surrendered to the whisperings of my inner Chaos demon in my ear.

So I impregnated him. With an alien.

Now, Arnav is married to Charlie Pancakes, the daughter of Bob and Eliza Pancakes. But he’s also going to have an alien baby.

That screenshot of him in his second trimester? From his thought bubble, he probably thought that his growing belly was a potbelly, and that he needed to diet.

And the last picture makes me wish I could rub his belly. It looks so round against his lean body.

Why We Love It: Arnav has become somewhat of a fan favourite in our Sims Community Facebook group. His adventures (or misadventures, we should say) are a source of constant entertainment and hilarity among our members. Thankfully, Khoo C. keeps us up-to-date on all the latest Arnav news. Most recently, our poor inept resident butler has found himself in his messiest situation yet and let’s just say it’s out of this world. We love that Khoo C. has taken the time to fully flesh out an NPC many of us often overlook.

“Talon found that Heather had been right about No’xia getting used to things. Like Yvonne had done with him, he’d been the one to make the nooboo laugh and giggle with tickling. Not that No’xia didn’t laugh when others tickled her, but Talon could make her laugh heartily. He loved his little sister, and spent time talking to her. It was at his request that they moved her bassinet outside whenever they were there so that she could be there, too.” – Faoiltearna S. 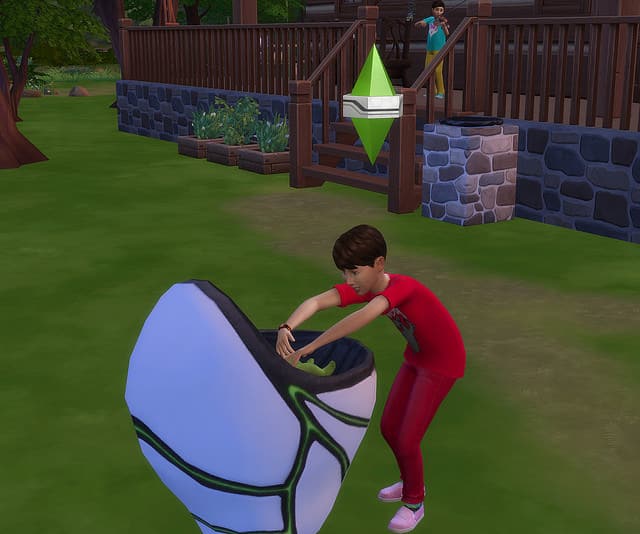 Click the picture to read the rest of this installment of The Underwood Decision!

Why We Love It: Aliens are a fascinating but underused aspect of the game so it’s refreshing to see them given such undivided attention in The Underwood Decision. It’s great to follow Faoiltearna’s alien Sims as they grow up and get used to life on earth. Faoiltearna writes elaborate, detailed stories that suck you into the story. You just can’t help but get attached to Faoiltearna’s Sims as you follow this story. To read the rest of this chapter or to start from the beginning of the story, click the picture to go to Faoiltearna’s blog!

Thank you to everyone who submitted a segment entry last week! We had so much fun looking through all of them. Remember, if your content wasn’t featured this week, there’s always next week so keep submitting all your fantastic screenshots and stories!

Want to be featured in a Weekly Segment? Join the Facebook Group!