Voice actors are starting to meet up all over again for another batch of voiceover sessions for the upcoming Sims 4 Pack. First we’ve made a compilation video of all the Instagram Stories posted by Krizia Bajos, one of the voice actresses working on The Sims 4. She’s posted a series of Stories in the last 48 hours of her recording various Simlish voiceovers that you can check out down below:

Then, we have an Instagram Photo of voice actors Cia Court and Patrick Seitz (both working on The Sims 4) meeting up at The Sims Studio: 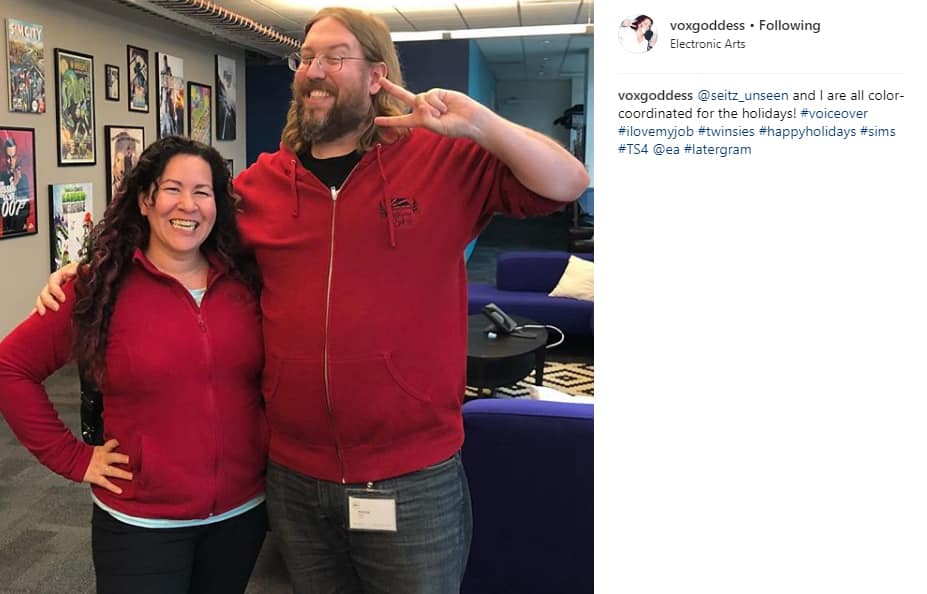 So, what do these pieces of information have to do with the idea of a Game Pack / Expansion Pack coming out in the first quarter of 2019? Well, let’s take a look at the previous patterns we’ve had of photos and stories by voice actors…

Although not strictly tied into voice acting, we do get evidence that both soundtrack composing and voice acting are the last parts of a pack’s development. One of the examples is the soundtrack recording sessions for The Sims 4 Vampires Game Pack that were published just 3 months before the pack’s release. (late September 2016 – pack came out January 2017)

Then we have voice over sessions for The Sims 4 Seasons Expansion Pack that were done between March and April of 2018. Just 2-3 months later the pack came out in June 2018.

The last example are the voice over sessions for The Sims 4 Get Famous Expansion Pack that happened sometime later in July – August 2018. Just like with previous packs, it only took 2-3 months for the pack to come out (November 2018).

We discussed both voiceover sessions for Seasons and Get Famous here!

Considering that the voice over sessions for the next The Sims 4 pack are currently underway it’s no secret that the similar scenario is going to happen this time around as well. Since so many voice actors are gathering it could only mean that they’re helping wrap up the last production stage of the next Game Pack / Expansion Pack for The Sims 4. With all the information and data we have from previous voiceover sessions we give the next Game / Expansion 3 months until it becomes fully announced and released to the public.

We’ll make sure to keep you updated with new information and details about the next pack as they surface on our website!