Any unconfirmed Island Living content discussed in this article is pure speculation. The author of this article is merely speculating on what MIGHT be coming based on subtle details spotted in the trailer and livestream.

@SimGuruLyndsay and @SimGuruDuke sure did spoil us with lots of new information about the upcoming Island Living expansion at EA Play last weekend. In fact, there was so much new information that some of the smaller details may have gone unnoticed in all of the excitement.

Here’s everything you might have missed watching the trailer and livestream the first time around!

Simmers asked and Gurus delivered! There were at least four new tattoos I spotted while going over the contents of the livestream and trailer again. Since Island Living is heavily inspired by Polynesian culture, new tattoos make a lot of sense. In the above screenshots, a masculine Sim is pictured with an elaborate thigh tattoo, along with an armband tattoo and a full sleeve that extends onto the shoulder and chest. A feminine Sim is spotted with a palm leaf tattoo design on her hip that’s poking out from a skirt. 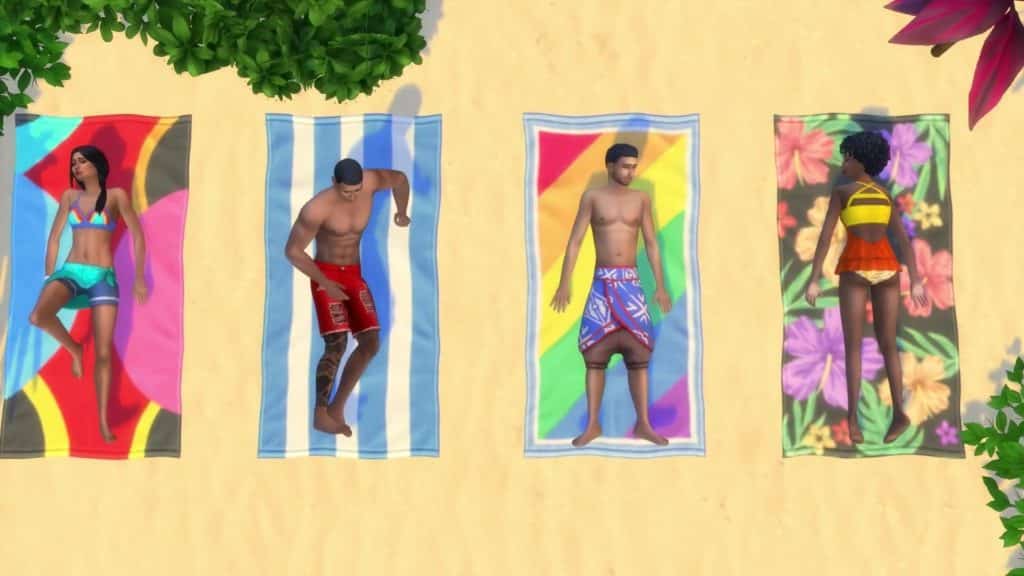 You probably noticed the sunbathers in the trailer, but did you notice the colourful beach towels they were lying on? It’s unclear whether these function as decorative rugs that Sims can suntan on top of, or whether they are functional objects with a suntanning interaction, but whatever the case, your Sims will be able to soak up some sun on a new beach towel that comes in a variety of fun and vibrant colours and patterns.

PSST! Notice the leg tattoo on the second Sim from the left! This could be part of the thigh tattoo pictured above or it could be a fifth new tattoo! 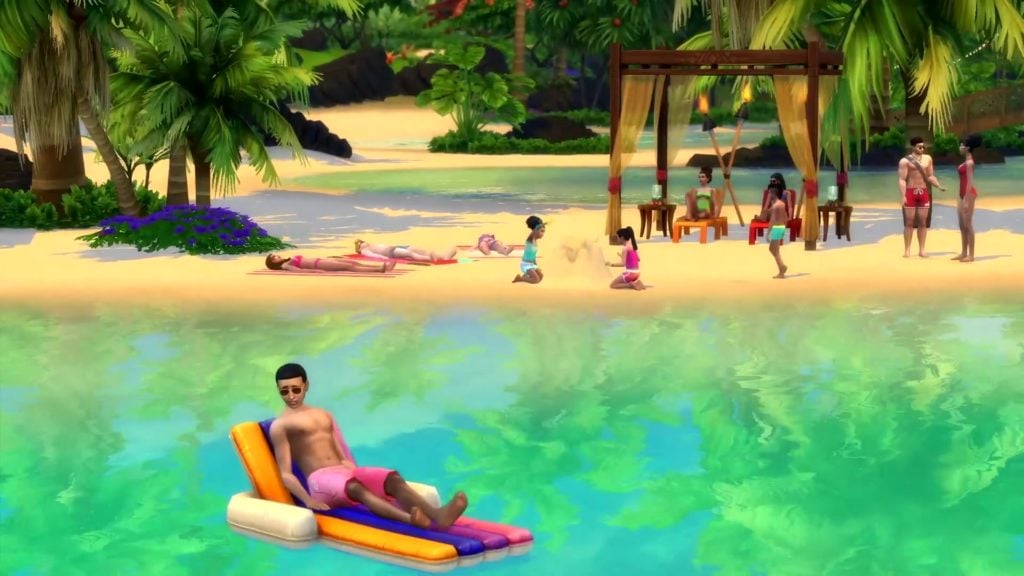 Lounge chairs were a hot topic of discussion during the livestream and for good reason; Simmers have been asking for lounge chairs for years. Did you happen to catch a glimpse of this Sim relaxing in the ocean on this inflatable water lounger, though? It looks like our Sims will be able to stretch out and chill both on land and in the open ocean. We just hope these water loungers can be used in pools, too! 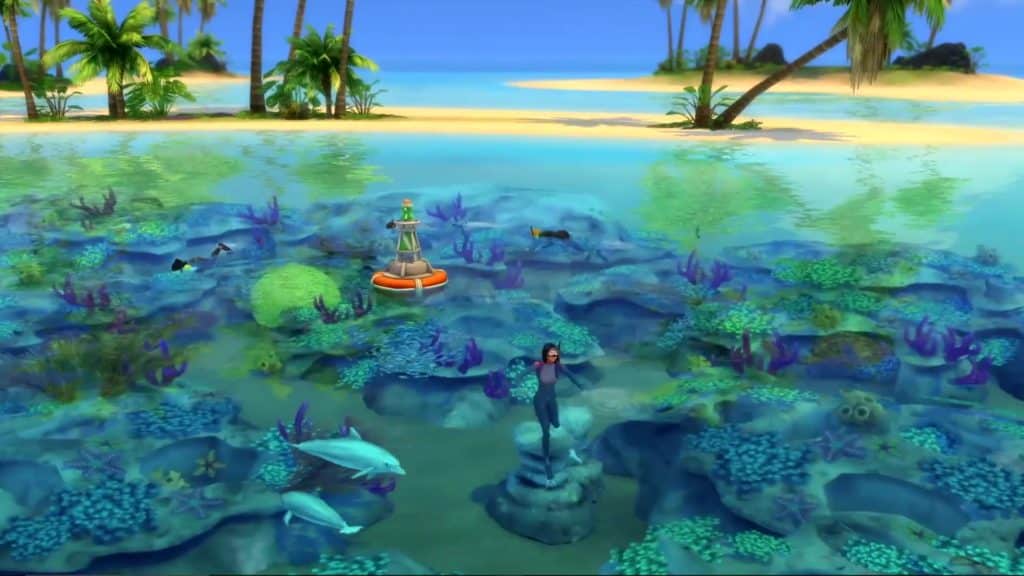 I’m sure you noticed this to some degree during the trailer, but can we just stop to appreciate this crystal clear water? Never in The Sims 4 have we been able to see all the way to the bottom of a body of water as clearly as if it was a chlorinated pool. Being able to see fish swimming below the water’s surface and take in the sights of ocean plant life is just one of those small details that have a big impact on our immersive virtual experience. 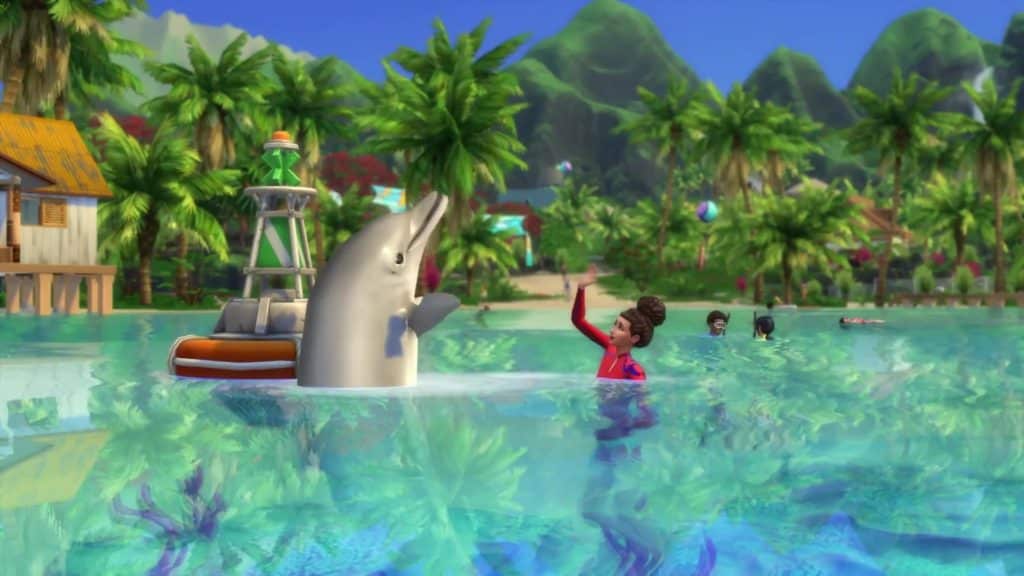 Did anyone catch these orange buoys floating in the middle of the ocean? At first glance, they look purely decorative, but after seeing the dolphin and this Sim playing with each other right next to one, it could be possible that these buoys are markers for special lots out in the water or designated areas where your Sims can explore off shore. I guess we’ll just have to wait until June 21st to find out for sure.

A Variety of Sand Sculptures

Sandcastles were pretty hard to miss, but take a closer look; there are at least three different sand sculpture designs pictured in the above screenshots. There is a traditional sand castle in the background of the second image, as well as a shark design and a gnome design featured in the first image. It’s nice to know that our Sims will be able to get creative with their sand designs. Perhaps it’s even tied into a skill? Only time will tell.

You might have missed it, but there were several points in the trailer where new vendor stalls were pictured in the background. In the first screenshot, it looks like there’s a closed stall in the distance behind the lifeguard. This stall doesn’t have a sign on top of it advertising food, so perhaps it’s a beach supply shop? The vendor in the 2nd and 4th images has what looks like calendars and postcards pinned up on the wall. This might be a souvenir shop. Even though Sulani is a residential world, it still has a strong vacation vibe, so a souvenir shop would fit right in. The vendor in the 3rd image looks like a grocer’s stall. Perhaps our Sims will be able to buy fresh tropical produce for recipes here.

PSST! Check out the fire dancer in the second image! Fire dancing was introduced to The Sims 4 with Get Together, but it looks like Simmers could be getting fire dancing with Island Living, too. 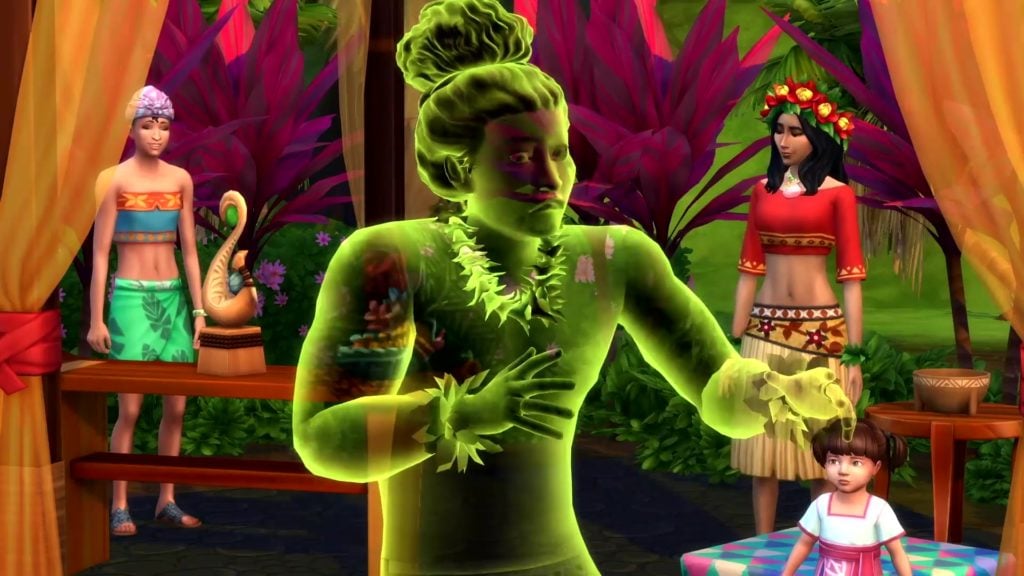 This one might be going out on a limb, but I couldn’t help but notice the statue behind the elemental spirit in this screenshot. It could just be decor, but it looks rather similar to some of the relics from Jungle Adventure, which have mystical powers that can bless or curse your Sims. Maybe some of the objects on Sulani have mystical secrets of their own…

If you’re a pro builder, you would have spotted this right away, but for the rest of us, a closer look at the trailer reveals a new foundation type (and a new weathered roof pattern). Houses can now be built on stilts both on land and in the water. We’re not yet sure about the exact mechanics of this new feature, but these are definitely usable lots that our Sims can travel to. 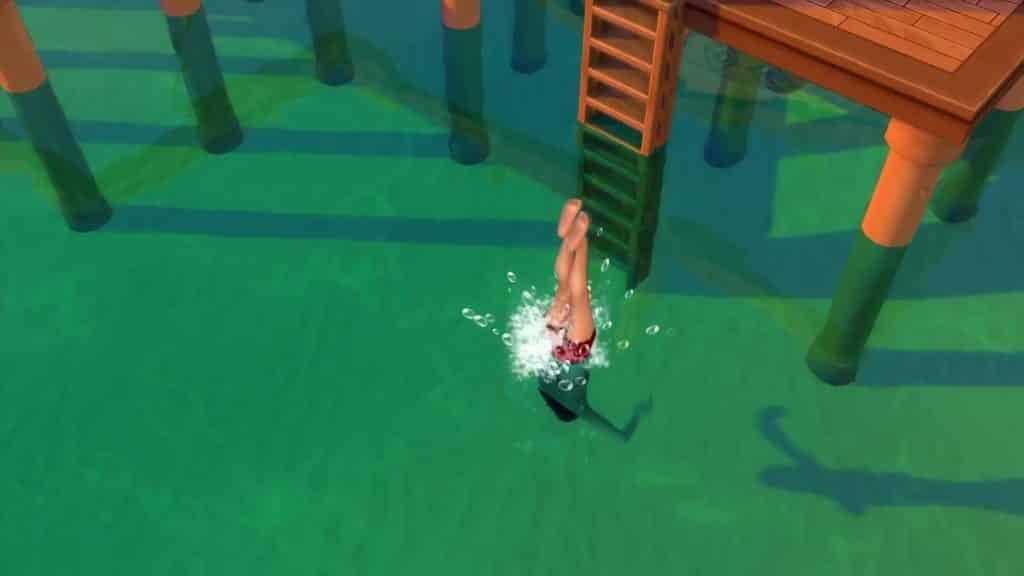 Another popular request has finally made its way into the game. Ladders! In the above image, you can clearly see a ladder going into the water right behind the diving Sim. On that note, it’s also very cool that our Sims can dive right into the open water from their back deck. Talk about living the island lifestyle!

This panoramic view of Sulani is absolutely breathtaking, but notice all the smaller islands around the main island of Sulani. The rockier formations in the water around Sulani don’t look like routable terrain our Sims can walk on, but the beachy island in the centre looks like it might have a buildable lot on it. A boat can also be seen traveling between the islands on the right. We already know our Sims will be able to sail around on their own boats, so the boat pictured here could indicate that our Sims will be able to treat the water around the island as routable common space.

Did we miss anything? Tell us all about it here in the comments or come hang out with us on social media!