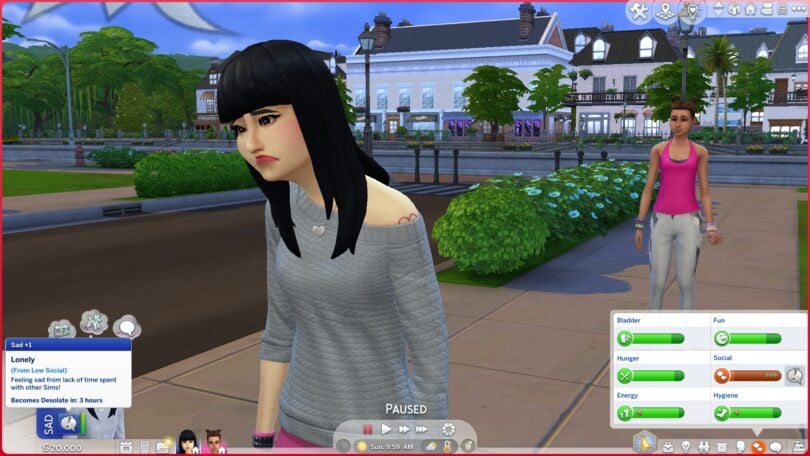 How to ensure your conversations go smoothly… at least most of the time!

Just like us humans, Sims are social creatures. Even Sims with the Loner trait need to interact with others at times; they just don’t need as much social interaction as other Sims. It’s important for new players to understand how conversations work in The Sims 4 to make the most out of every relationship.

No Sim is an Island

All Sims have a Social motive that must be kept in the green to avoid becoming Sad. Sad Sims won’t want to do many activities and will build skills and career progress slower. Some Sims will need to socialize more than others, depending on their traits.

When a Sim is feeling blue due to loneliness, it’s time to get out of the house and make some friends!

When socializing with other Sims, make sure you’re paying attention to the tab at the top of the screen. It will tell you how many Sims you’re currently chatting with and how the conversation is going. This will change according to the types of interactions all Sims in the conversation choose to do.

For example, if you’re on a date with someone and the conversation is Amorous or Steamy, it might be a good opportunity to go in for that first kiss! But don’t try to make a big romantic move if another Sim buts into the conversation; that’s sure to make the conversation Awkward and your romantic advances will fall flat!

To avoid bad conversations, don’t repeat the same social with the same Sim too often. Use at least two different socials before trying to use that social again. Being repetitive can cause the conversation to become Boring. Sims are less likely to respond well to your socials in a Boring conversation.

If the conversation is just going downhill no matter what you do and everything you try only seems to make things worse, it’s best to just walk away and allow both Sims to calm down a little before trying to connect again.

An Ocean of Emotions

Remember to pay attention to your Sim’s emotions, too! Sims in negative emotional states are less likely to have fulfilling social interactions than Sims in a positive emotional state. You can see what emotion the other Sim is currently feeling by looking at the same tab in the top middle of the screen.

If you want to ask that crush of yours out on a date but they’re feeling Sad or Angry, try to cheer them up first with friendly socials like Brighten Day before striking up a flirtatious conversation and asking them out.

For an in-depth breakdown of every emotion and how to get in and out of each emotion, check out our Beginner’s Guide to Emotions in The Sims 4!

Now that you know the basics of socializing, get out there and meet some friends! Who knows? You might even meet your future spouse!