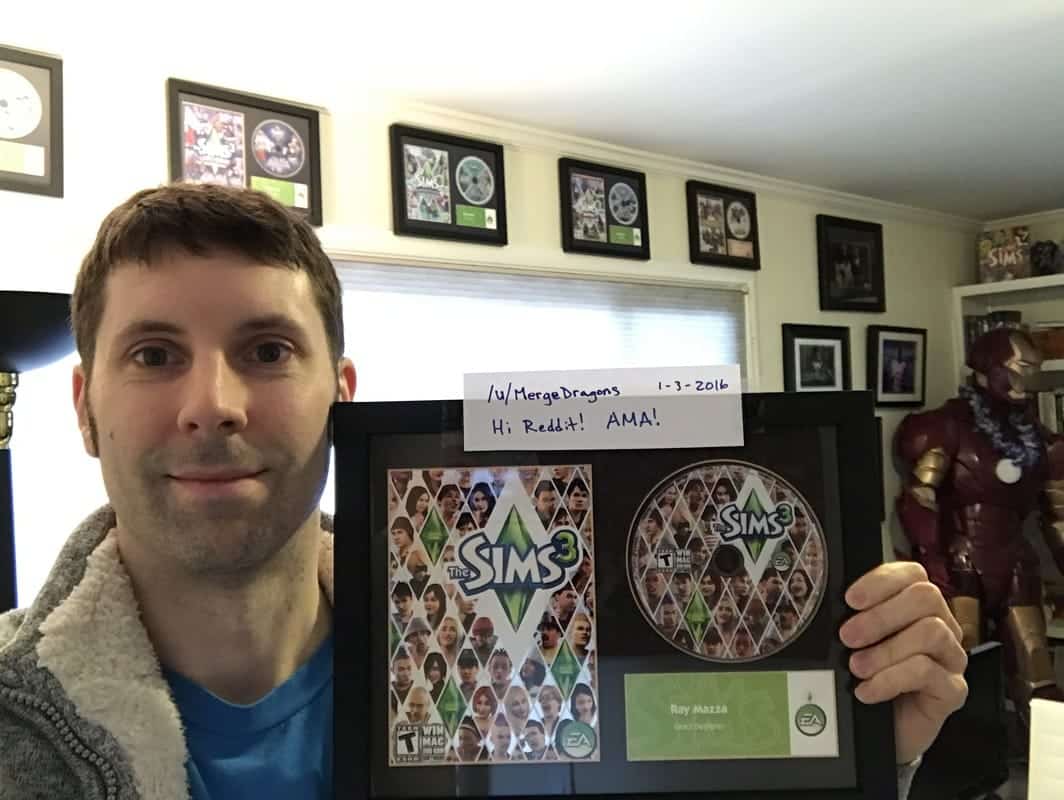 Ray Mazza opened up an AMA (ask me anything) thread on Reddit, asking for people to give their questions concerning his work for The Sims and Merge Dragons, his new mobile app. We collected some of the most interesting questions and answers concerning The Sims. Check them out!

Q: What mark did you have on the Sims franchise that you are most proud of?

A:In The Sims 2, it was the coding that made the service Sims real people. In TS1, the maid, cop, firefighter, etc, would all do their jobs, but that’s it. In The Sims 2, if you struck up a conversation with them you’d be able to make friends with them, and invite them over, get romantic, even marry them. It was always so much fun to make a cop part of your family, and have them change into their uniform, etc.

In The Sims 3, I had a broader influence on the game, and I’m very proud of the open world aspect that the design team worked on together. It fundamentally changed how the Sims was played — being able to walk across the street and visit your neighbor.

For something that I was solely responsible for, it was a lot of the build mode advancements — being able to work on a free form placement mode outside of the grid, adding lots of “clutter” objects and locations to put them, being able to freely rotate objects, etc, and officially support it. Even being able to drag walls back and forth without having to demolish your home! It gave builders such a great leap in their tools to make better looking homes and I was quite proud of that.

One smaller piece that I’m proud of that I feel like mentioning even though it’s tiny is that you can collect meteorites around the landscape. I made sure that the bulk of them were named after real meteorite types (e.g. Carbonaceous Chondrite or Eucrite, etc) and had similar relative rarities to what’s found on earth. I always loved how games could teach you things in a fun way, and this was one of those aspects.

Q: Hey, I’ve read all your blog posts about the design on TS3. What was, in your opinion, the best or most interesting thing that didn’t make it into the end product?

There was one point when we had snow in the base game, and it looked really good! But it had issues like snowing through roofs, and we didn’t have time to make all the associated gameplay, so we held that off for Seasons. I so wanted weather in base game though.

Some things we considered but didn’t do were: (1) continuous aging rather than discrete age groups, (2) being able to see inside all buildings/shops/work and having the simulations be real in there, and (3) injuries, wheel chairs, casts, etc.

All of those were way too much work to put in, but would have been fantastic.

Clothes Shopping — yes, that was on the list at some point early on. Most TS2 base game features were.

The game certainly went in the direction we’d hoped in the general sense and spirit. We held true to our core beliefs and never changed direction in any major way. I’m very happy with where it ended up.

Q: If you’re still around, I’ve got a question about your role on The Sims 4, if you don’t mind. 🙂

According to your site, you were responsible for the “game vision” of The Sims 4. I’m really curious about what that game vision actually consisted of, compared to previous Sims titles. Was there a mission statement that Maxis used? And if so, what was it?

A: There were really two types of visions. There’s a super high-level vision that is more about the wow-factor for the game, the differentiator and selling points. That was focused on making the Sims more emotional and more life-like, making the creation tools more powerful, and building a platform to let players easily share and find content. I didn’t make this vision as I came onto the project after it had been going for a few years, and I mainly had to uphold it.

Then there’s the detailed vision, which was more personal to me, and was basically a list of features that I thought needed to be in the game for it to top previous Sims games and make players psyched about it. I can’t share the details of that though, that would still be confidential.

Q:A lot of the time, the game devs for Sims 4 reason that they cannot contribute a certain product or feature for the sims 4 is because of a lack of team members. Examples of items they say they cant produce: spiral stair cases, toddlers, better roofing options.

What can we do, as the fanbase, to get their attention and show the devs these are important aspects of the game. Futhermore, isthis a viable excuse from them not to provide such content or over all is it an excuse to simply not supply the fanbase with what they want?

A: Usually, devs feel the same way as you, and literally cannot do anything about it, because of a schedule or budget they cannot control. Honestly, I think you’re already doing a great job at getting their attention through Sims fan sites, twitter, the Sims forums, etc. Trust me, they have a long list of things you care about (especially because a lot of the production and design team are fans themselves and want the same things) and they want to do it all, they just need to find the time/resources.

I do believe their reasoning is viable. There is only so large the team can be before it is no longer profitable to run compared to other games EA makes. What the team really needs for the future is a better set of tools and a better process which allows them to make content quicker, and repurpose content from previous Sims games more easily into new Sims games.

For more questions and answers, check out this thread!