In case you missed it, The Sims 4 has announced the next game pack making its way to the series and, suffice it to say, we didn’t see this one coming. The Sims 4 Star Wars: Journey to Batuu promises to be a wild space adventure completely immersed in the theme of the hugely popular Star Wars franchise.

There’s no question that Star Wars fans are going to find lots to love in the reveal trailer, but having next to no knowledge of Star Wars, myself, I wanted to take a deeper look into the trailer to see what this new game pack might be able to offer to Simmers who might not be familiar with the plot, setting, and characters from the Star Wars films.

So without any further delay, let’s dive deeper into the reveal trailer for The Sims 4 Star Wars: Journey to Batuu! 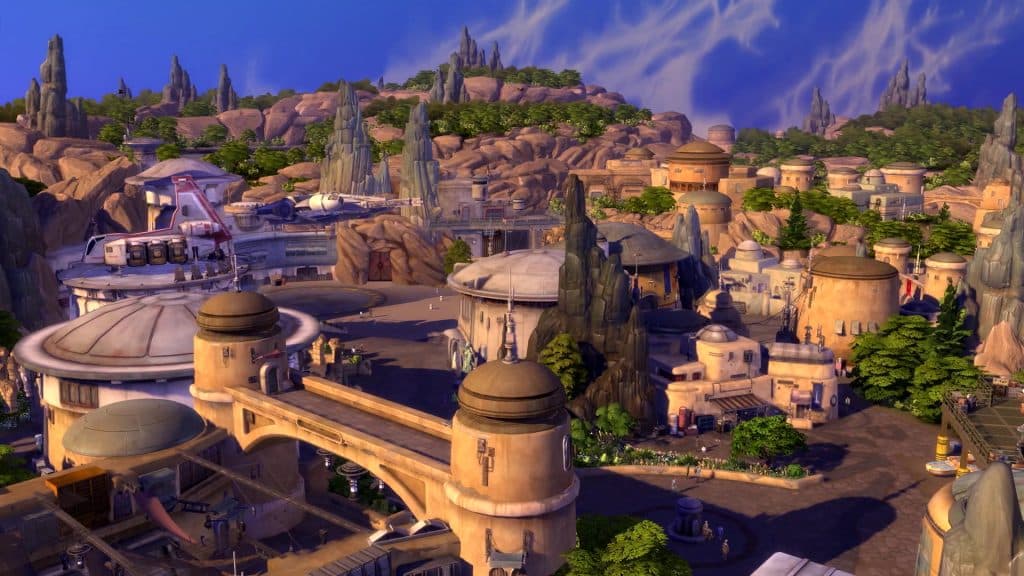 Okay, okay, so the new world of Batuu was pretty hard to miss. Most of the trailer shows scenes of Sims in the world of Batuu, after all, but after examining the landscape and scenery found within the world, it looks like we’ll be getting a new desert-themed world. Currently, The Sims 4 only has two desert worlds; Oasis Springs and StrangerVille and we don’t yet have any desert worlds as vacation destinations. Offering a third option for more arid climates will surely appeal to plenty of Simmers whether or not they’re Star Wars fanatics. 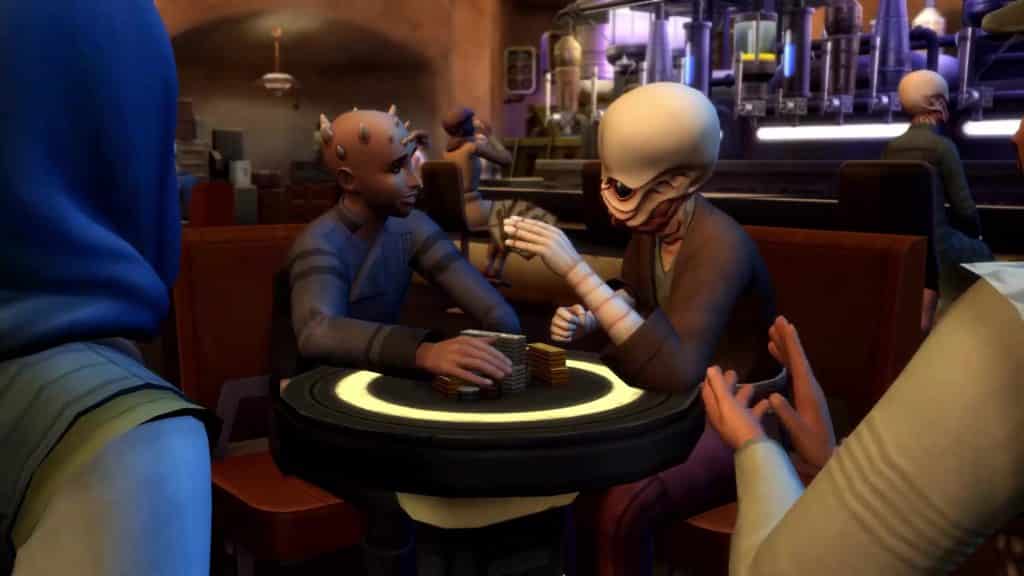 Okay, so we’re not totally certain there will be new occult types coming in Journey to Batuu, but there is no mistaking the number of Sims in the trailer who look well… not human. Are they new types of “supernatural” Sims or are these simply some fun new costumes? Only time will tell, but this Star Wars newb is dearly hoping for some new occult gameplay. 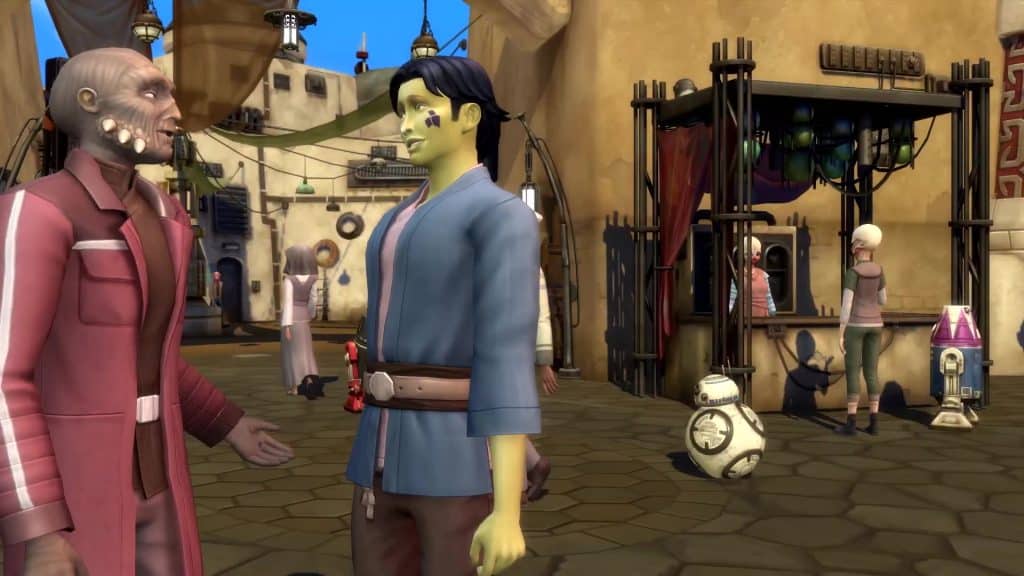 Who loves new tattoos? WE DO! In the trailer, a Sim can be seen with some kind of marking on his cheek, just under his eye. If this is indeed a tattoo and not face paint, this would be the first add-on pack for The Sims 4 to add facial tattoos to the game. 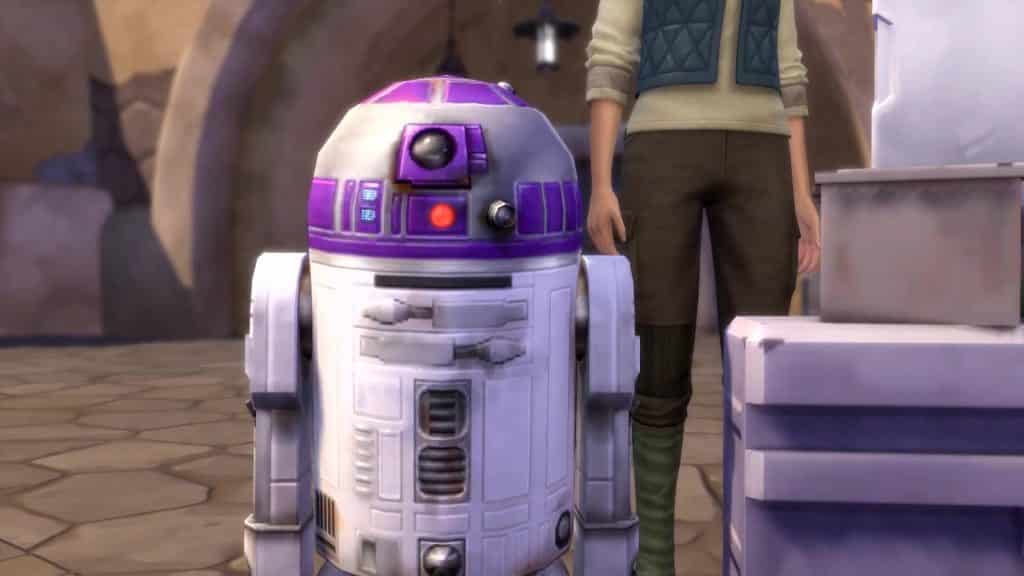 Many Sims in the trailer can be seen with little robots resembling the beloved Star Wars character, R2D2, trailing behind them. Simmers who own Discover University might compare them to the Utili-Bots our Sims can build, but R2D2 is no housemaid! Perhaps these new robots on Batuu will act more like companions than a free cleaning and repair service? 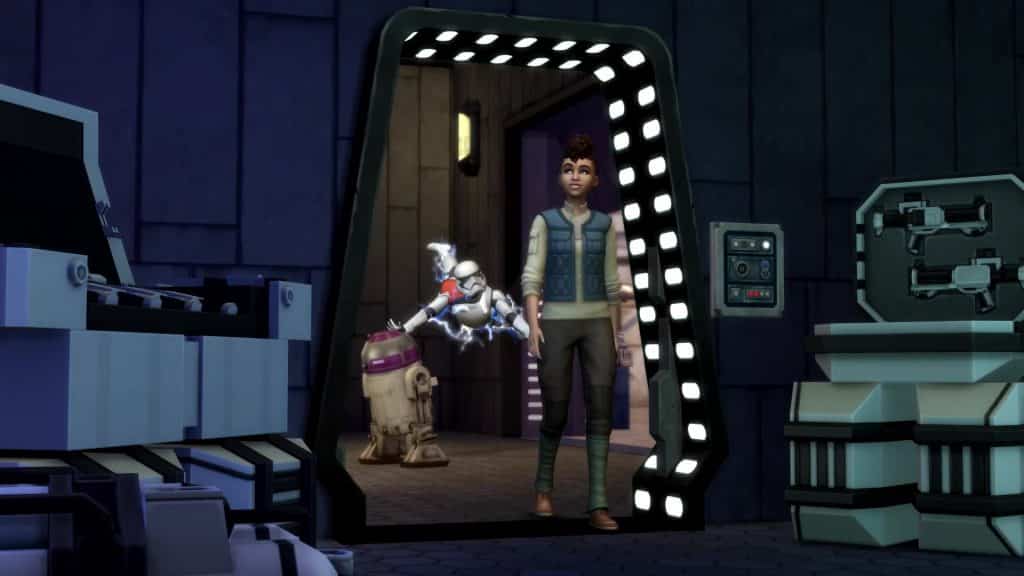 The Sims 4: StrangerVille was the first game pack for The Sims 4 to have a linear story for your Sims to play through. In the reveal trailer for Journey to Batuu, we can see R2D2 electrocuting a storm trooper to help his Sim companion access some kind of forbidden area on Batuu. It certainly seems like it would fit the theme of Star Wars to have our Sims embark on quests and adventures while in the world of Batuu. 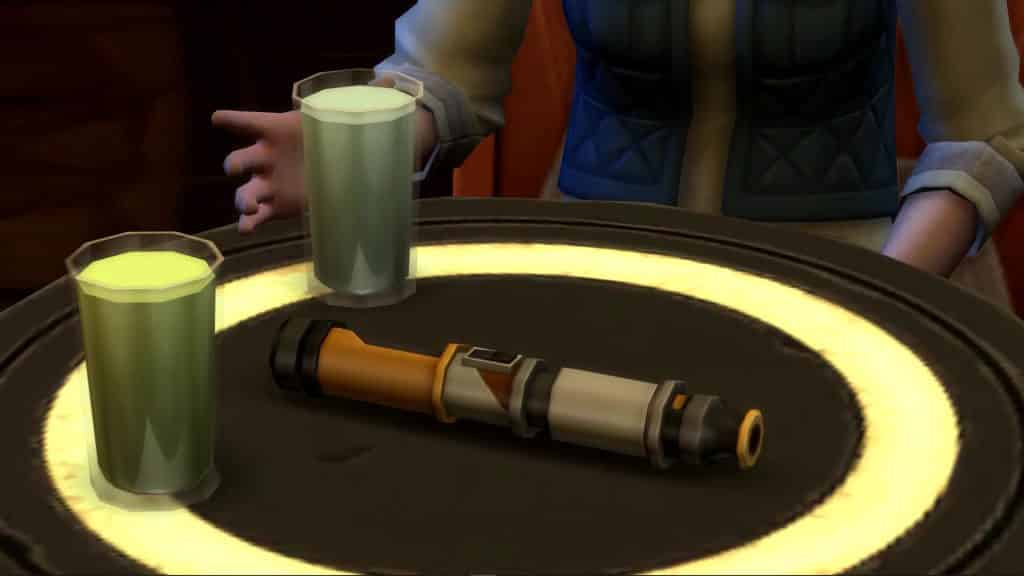 At the bar on Batuu, we can see some new and interesting beverages being served up and enjoyed among the patrons. Some of them have interesting effects like smoke rising up from the glass. 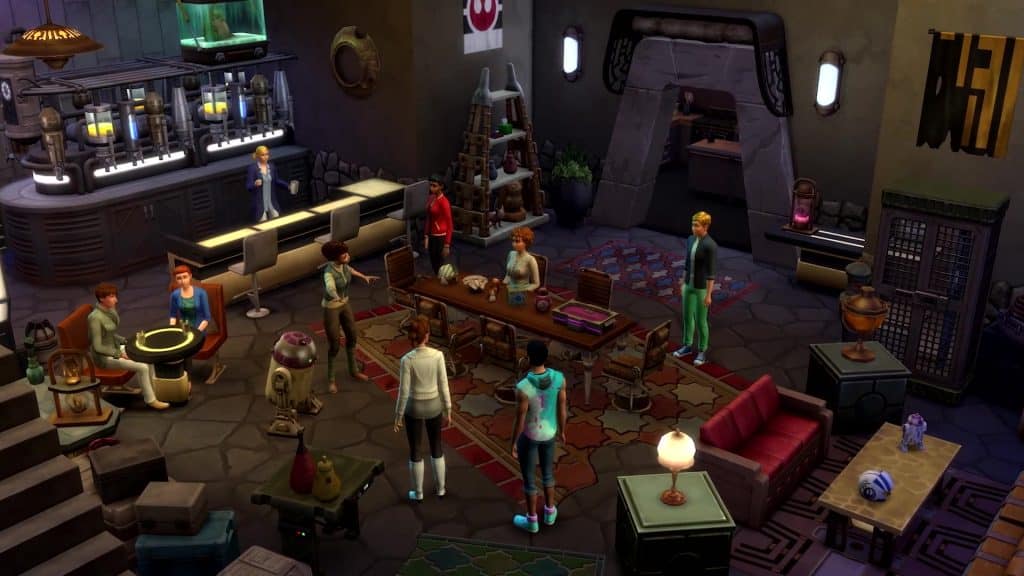 Throughout the trailer, we spotted several small objects that look like they could be part of a new collection. Avid collectors in the game might find Journey of Batuu worth their while to go hunting for new treasures and trinkets to display around their Sims’ homes. 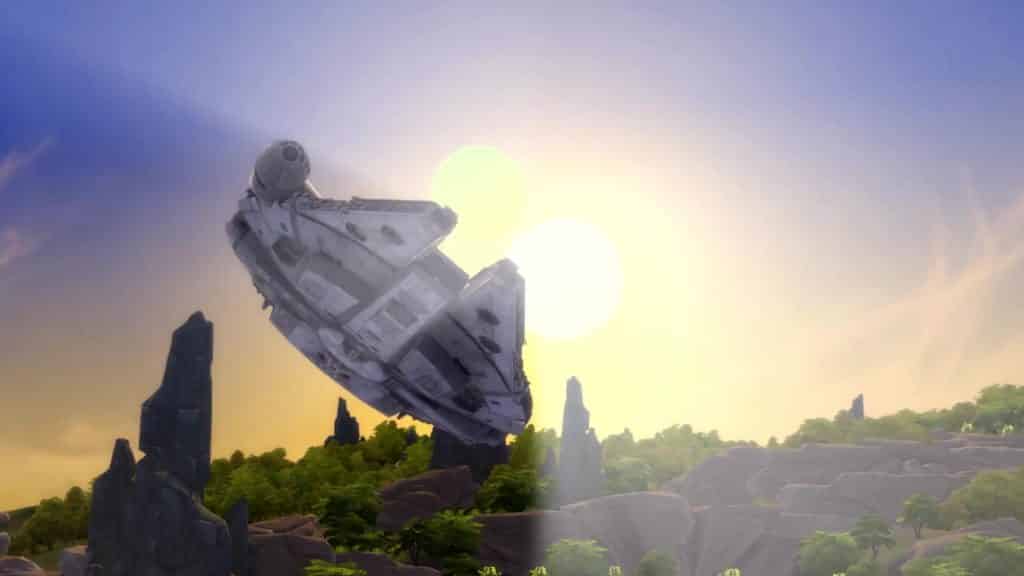 Simmers have been begging The Sims Team for cars since the game’s initial release back in 2014 and while we still don’t have cars, we might be getting vehicles of the flying variety? This spacecraft (which I’m told is called the Millennium Falcon; thank you, Star Wars fandom) was featured prominently in the reveal trailer and it looks like the Sim in the trailer has accepted some kind of mission to gain possession of this craft. Will it play a part in a larger storyline? Will our Sims actually be able to drive it? Stay tuned to find out!

Did you spot anything else in the trailer that got you excited? Tell us all about it here in the comments or come chat with us on social media!