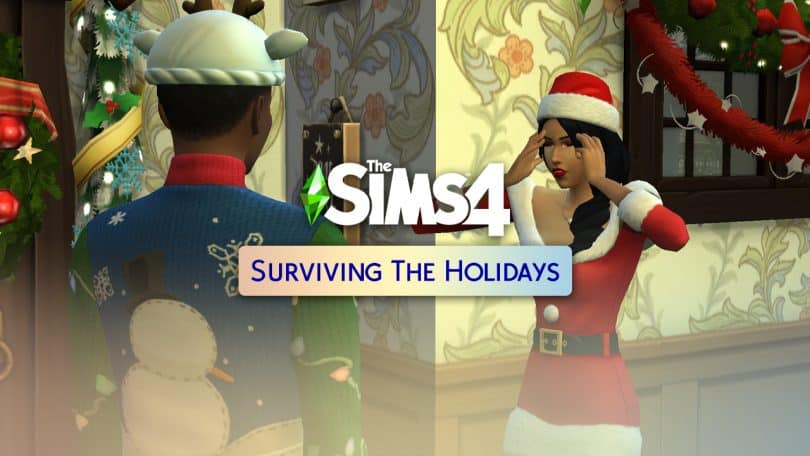 Today, we said goodbye to the limited-time Perfectly Well-Rounded scenario and welcomed a new scenario called Surviving the Holidays! This scenario is also available for a limited time, only sticking around for the holiday season. It’s a relationship-based scenario; two Sims who hate each other are stuck together over the holiday season and have to either set aside their grudges and become friends, or spice up their rivalry with some unlikely romance.

We’re going to be honest right away; we weren’t able to complete this scenario. We were playing with an empty Mods folder and we can’t say for certain whether we were affected by a glitch or if we did something incorrectly. Still, we’re going to describe what happened to give you some insight into this… issue? If it even is an issue? Again, we’re not totally sure. 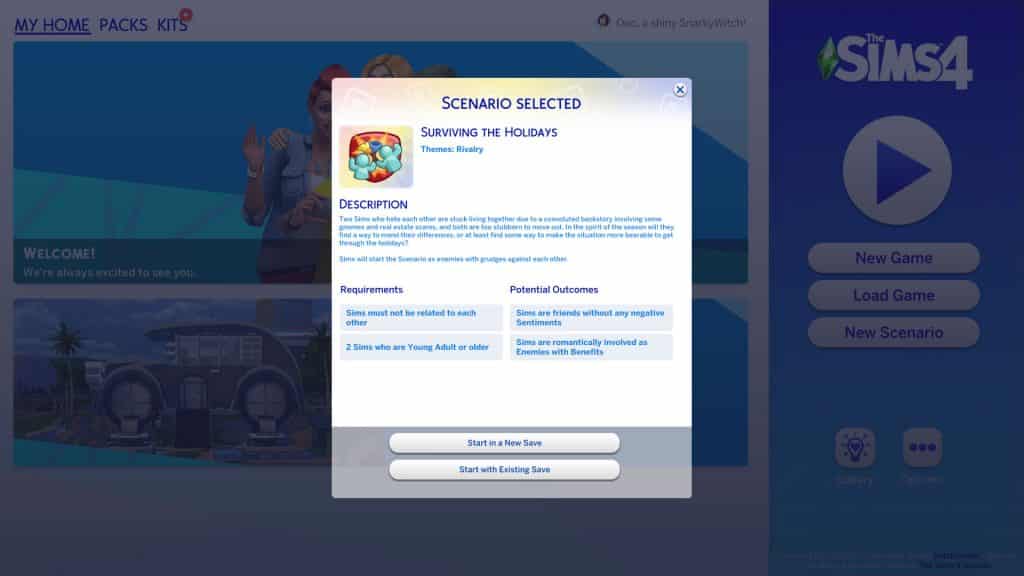 So we started the scenario in a new save via the Main Menu. The scenario requires a household of two Young Adult or older Sims who are not related to each other. We used the CAS Stories, randomize button, and styled looks to quickly slap together a couple Sims for this scenario and away we went! Since every “good” Hallmark Christmas movie involves a city slicker travelling to a small, close-knit town for the holidays, we moved our Sims to Henford-on-Bagley and started in Winter. And since the place didn’t look very holiday-ish, we spent some time decking the halls to set the scene.

Not A Very Holly Jolly Winterfest… 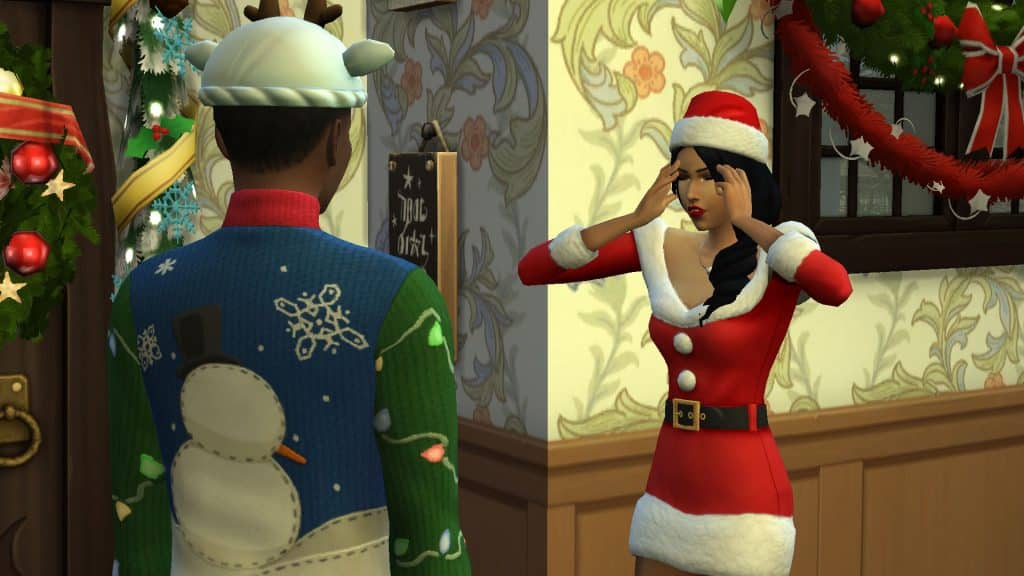 As part of the scenario, the two Sims will start out as Enemies and have the Festering Grudge sentiment with each other. There are two possible ways to complete this scenario; we can have our Sims become friends with no negative sentiments towards each other, or we can become “enemies with benefits” by building the romance bar while simultaneously tanking the friendship bar. The second option sounds far more interesting so that’s the outcome we tried to achieve. 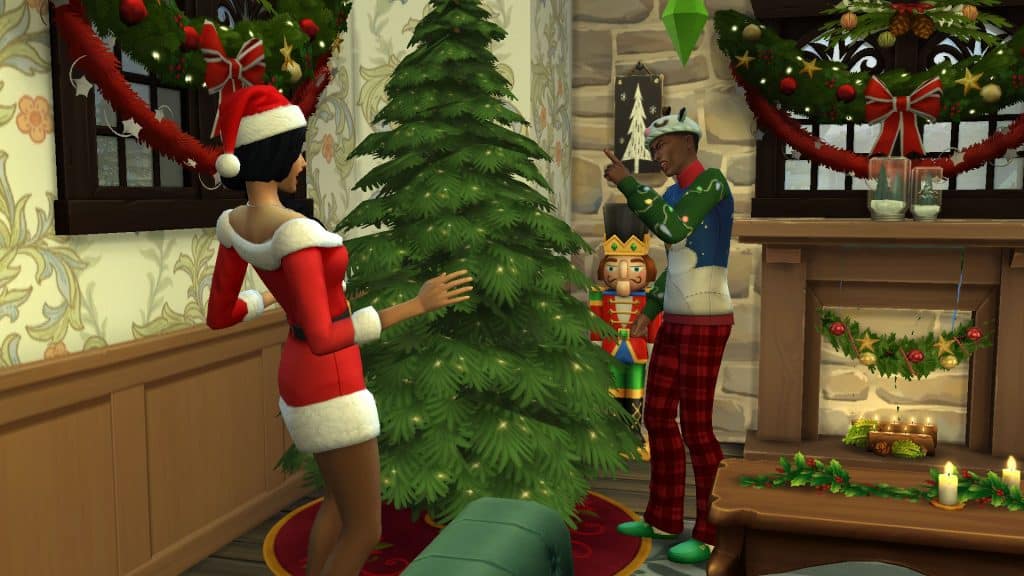 Their negative relationship made it difficult for our Sims to have any positive interactions with each other at first. Decorating the tree together did yield some positive results but it was mixed in with a few autonomous mean socials as well. We decided we were going to get nowhere fast unless we swayed things to our favour, so we added the Romantic Aura trait to the lot. Once we did that, romantic socials were almost too easy. Despite hating each other, they were Flirty all the time and more than willing to accept romantic socials with each other. The trouble was, all the romance improved their friendly relationship to the point where our Sims were no longer enemies. Well that wasn’t going to work…

So after a romp in the bedroom to max out the romance bar, we decided it was time to start some more drama. Luckily for us, drama was right around the corner. Our Sims soon discovered that their bedroom activities had resulted in a bun in the oven! Is it a holiday miracle or a holiday curse? Well, we were still trying to get the Enemies with Benefits outcome so we settled on curse! Naturally, finding out that you’re having a baby with someone you don’t like is a very tense situation, made even more stressful during the holiday season. These lovebirds went from WooHooing to fighting all over again! 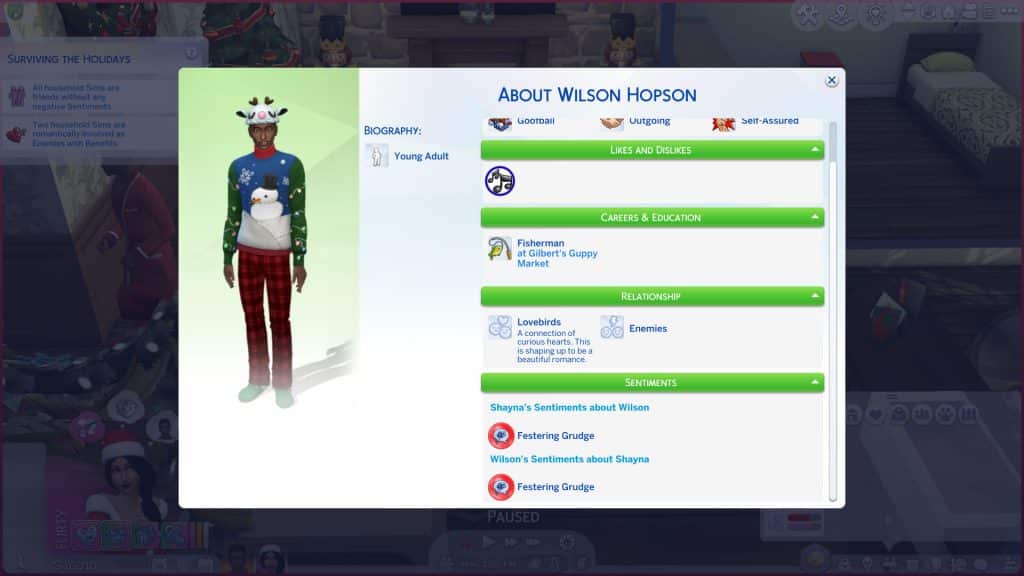 That should have completed the scenario, except… it didn’t. We were confused as to why the scenario didn’t complete. Our Sims were max enemies and max lovers, they’d kissed and WooHoo’d and fought plenty. We tried playing through until the end of Winterfest in case this scenario requires you to actually play that holiday if you have Seasons. No luck there. Winterfest came and went. Our Sims even had their baby on Winterfest evening while Father Winter was paying his visit. Then we thought perhaps we had to wait for the Festering Grudge sentiment to go away, but that didn’t complete the scenario, either. 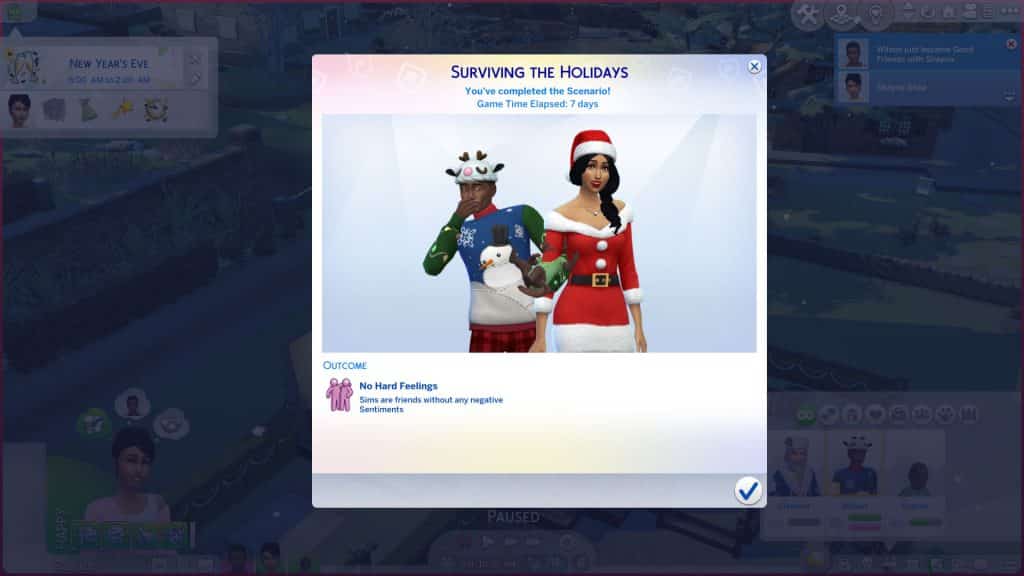 In the end, our Sims were both enemies and lovers, Winterfest and New Years had come and gone, Spring had begun and their baby was about to grow into a toddler… with no end to the scenario in sight. That’s when we finally decided to just give up. We couldn’t think of anything more we could do to get the Enemies with Benefits outcome. We just cheated their friendship to instantly complete the scenario with the No Hard Feelings outcome, instead.

It goes without saying that any scenario we can’t complete without resorting to cheats to achieve an outcome we didn’t want isn’t going to get a good review from us. Maybe we missed a step somewhere along the way but if that’s the case, the goal should be written much more clearly. According to what was written, we satisfied the requirements for the Enemies with Benefits outcome but still weren’t able to complete the scenario.

Had the scenario worked properly, we probably would have had quite a bit of fun with our playthrough, especially with all the drama of the baby that we threw into the mix. But nothing we did seemed to work so in the end, we were left very disappointed. It’s a shame because a holiday-themed scenario sounded like a lot of fun to kick off the holiday season.

Which brings us to our next criticism; despite the scenario title and description being holiday-themed, the scenario itself really doesn’t have anything at all to do with any winter holiday at all. It’s up to the player to set the holiday scene but none of it has any bearing on the scenario goals themselves. It’s just glorified set dressing. Players who own the Seasons expansion will no doubt have an easier time getting into the festive spirit with winter holidays on the calendar, a variety of holiday activities, and of course, snow. For players without Seasons, they’ll pretty much just have to rely on the handful of décor pieces that come with the free holiday addon and pretend like it’s the holiday season in their game.

Honestly, this scenario could be played any time of the year with no connection to any holidays whatsoever.