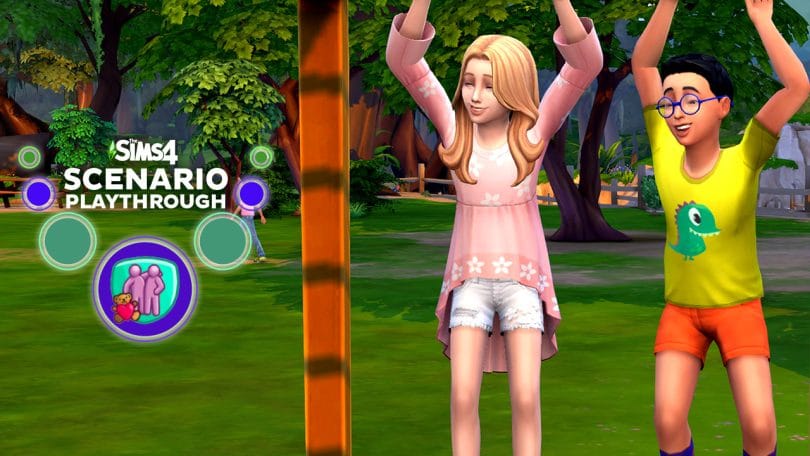 Make a childhood friend for life in this limited-time scenario!

On the scenarios panel in the main menu, you’ll see that the Best Friends scenario is listed as an Easy scenario.

This is a time-limited scenario! Players will have to start the scenario before June 29th, 2022 before it disappears forever. If you’re going to be busy throughout the month of June but still want to play the scenario, we recommend starting the scenario and keeping it saved until you have time to play it out. Any in-progress limited time scenarios can still be played after the deadline.

The scenario description states that your Sim will need to focus on building friendships as a child and enjoy everything childhood has to offer before they become a teenager. This implies that you can potentially fail the scenario if your child Sim becomes a teenager before completing all the goals. If you don’t want to risk failing the scenario, you can play the scenario with aging off.

Once again, the goals on the main menu screen are annoyingly vague but here’s what you have to do:

I used one of my households I had made previously for this scenario for the sake of getting into the game quicker. Single dad Avery Lynch and his daughter Adelaide Lynch moved into the apartment next door to the Jangs because I knew the Jangs had a daughter named Billie that Adelaide could befriend.

I got to work befriending Billie and sent Adelaide over to their apartment unit to become friends. She ended up staying late because I was determined not to send her home until the two were BFFs. Before Adelaide left, she gave Billie a key to her apartment so they could hang out whenever Billie wanted. One goal down, 6 more to go!

Since I was pretty sure making friends would be the most time consuming part of the scenario, I prioritized that, first. Luckily, she was good friends with her dad so she now had 2 out of 4 good friends. Whenever Adelaide wasn’t doing homework (another goal finished, phew), she was socializing. She did school projects with Billie and spent time at the park to knock out a few more goals.

The park is a great place to meet other kids, which is where Adelaide met the rest of her friend circle, including Nanami Ito and Lucas Munch. With introductions out of the way, I decided to focus on completing the park activity goals. 20 seems like a high number but you can easily spam this by telling them to play on the monkey bars, cancelling the action once they start, and then lining up the same action again. It will count towards the goal each time.

Once Adelaide completed that goal, most of the kids had gone home for the night so Adelaide did, too. That’s when she was visited by the monster under the bed! Normally, I put a Coolala Defender nightlight in all my kids’ rooms so I don’t have to deal with the pesky monster. It’s cute the first few times but it gets old fast. This time, I needed the monster to appear to complete one of the scenario goals so it was actually exciting.

Adelaide hopped out of bed and began trying to befriend the monster. The first couple of attempts failed but she did eventually become the monster’s friend. Unfortunately, it disappeared as soon as she befriended it so she didn’t have the time to talk to it five more times after that. Oh well, we’ll just have to wait for our new monster friend to pay a visit another night.

Where is the Monster???

That left only one goal before we could throw a birthday party for Adelaide; talk to the befriended monster under the bed five times. There was just one problem. Okay, make that two problems.

The first problem was that the monster under the bed didn’t seem to want to visit Adelaide again. I forced her to sleep in a regular single bed with no Coolala Defender nightlight and never let her dad spray the bed for monsters. I made her sleep from 8pm to 8am every night and nothing. It figures that when I don’t want the monster to appear, I have to use the nightlight or it shows up every night. The one time I actually want to see it? Nothing.

Oh, what was the second problem, you ask? Well it wasn’t really a problem for Adelaide but probably a big problem for the Rasoya family because Geeta Rasoya keeled over in the middle of the Arts Quarter and died from heat exhaustion. So that was weird.

Moment of silence for Geeta… Okay, moment over. Moving on!

Nearly a week went by with no monster sightings. I was about to go digging for some kind of cheat to force it to show up when finally, it decided to come back one night. For some reason, Adelaide was scared of it and acted like they weren’t friends anymore but talking to the monster did still complete the goal, regardless of whether the attempt was successful or not.

At last, Adelaide had met all the requirements to throw a birthday party so I got her and her dad all dressed up in their partywear and invited all her friends over for cake and presents. That’s a lot of presents for one kid, but hey, she’s a straight A student with lots of friends and the worst trouble she’s ever been in is for making a mess in the living room. I’d say she deserves to be spoiled.

As soon as Adelaide blew out the candles on her cake, the scenario completion screen popped up before she even had a chance to spring up into a teenager. I completed the scenario in 8 days but I was cheating up motives quite a bit so it may take you longer to finish without any cheats at all. Since the child age length is 13 days on a normal lifespan, you might want to turn aging off for the scenario to give yourself more time if you need it.

It seems like The Sims Team is starting to give out different rewards for different scenarios because instead of getting the usual 5,000 satisfaction points for finishing the scenario, I was told Adelaide got a sentiment with her BFF and both her and Billie got a Flirty potion in their inventories. That’s a pretty lame prize to begin with but to rub salt in the wound, Adelaide didn’t even get the sentiment or the potion! Even if she had, sentiments are temporary and Flirty potions are one time use with a temporary effect. I would have rather bought some new permanent reward traits with 5,000 satisfaction points.

The scenario itself was pretty fun! I enjoyed exploring all the different aspects of childhood with my Sim and I appreciate that we got a scenario that wasn’t focused on adult Sims. It’s definitely a good scenario for family players who like to play with the younger life stages and I’d agree that the scenario is an easy one. The biggest challenge is doing everything before your child becomes a teen but since you can turn aging off to avoid that entirely, it’s as easy or as challenging as you want it to be depending on your chosen lifespan.

My biggest complaints are that this scenario is, once again, time locked for no good reason and the prize for finishing it is… pretty terrible. I maintain that time-locked scenarios should be reserved for special event and holiday-themed scenarios. Everyday life scenarios should always stay in the game permanently Especially a scenario like this. There are so few scenarios that aren’t about adults. Why restrict that further?

As for the reward… please just give me my 5,000 satisfaction points, Sims Team. It’s a let down when you’re expecting a big satisfaction point payout just to get a couple potions and a temporary sentiment instead. Or in my case, not even get those at all. At the very least, list the rewards on the main menu so we can decide if the payout is worth our time and effort.