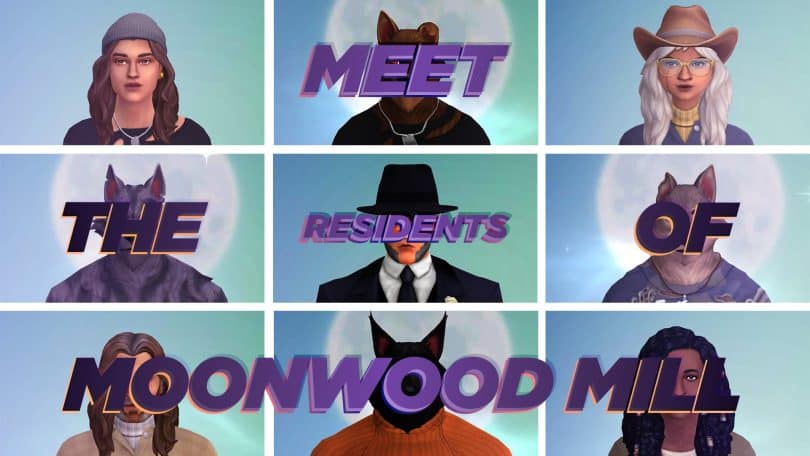 Meet the Humans (and Hairy Werewolves) of Moonwood Mill!

The Sims 4 Werewolves comes with one premade family already living in Moonwood Mill, but there are five more households connected to Moonwood Mill that do not live in a home in the world. Most of the town’s residents are, unsurprisingly, werewolves.

So without any further delay, let’s meet the residents of Moonwood Mill!

Kristopher Volkov has been around longer than most can remember. He founded and leads the Moonwood Collective, and is eager to take in any werewolf feeling displaced or lost.

Lily joined the household long ago, a lonely wanderer who had lost her closest friends to the vampires. After her came Rory, then Jacob. Though Rory’s relationship with her adoptive father has soured, Jacob and Kristopher’s connection has flourished. Both bear the same calm yet intense soul, and everyone in Moonwood Mill knows Kristopher intends for Jacob to be the heir to his pack.

Most of Moonwood Mill knows Rory as the leader of the Wildfangs, but she first arrived as a confused young werewolf under the care of Kristopher Volkov. He tried to counsel control and to nurture her like one of his garden flowers, but the two grew apart as Rory grew up. His ideals and values stifled her inner wolf until Rory chose to listen to the beast inside her and moved out to form her own pack. Nowadays, Rory may seem like she has it all figured out, but deep down, she’s still discovering how to be the leader she always wished Kristopher could have been.

Wolfgang has lived in Moonwood Mill for decades, where he’s been documenting the history of werewolves and trying to give them a brighter future. A famous author who specializes in werewolf “fiction,” his books have introduced the idea of the “friendly neighborhood werewolf” into popular culture. Because he uses a pen name, nobody realizes he himself is actually the very thing he champions.

Shortly after Lou’s arrival in Moonwood Mill, he tried to impress his date Celene by taunting the town’s notoriously feral werewolf, Greg. His poor decision led to painful consequences for both him and Celene, but while she sought a remedy, Lou figured he could just ride this one out…which didn’t turn out as anticipated. Will this master of mischief learn to love his new inner wolf or will he try and find a way out of the mess he’s found himself in?

Ever since she was a little girl, Celene has been fascinated by romanticized tales of lycanthropy. However, she got more than she bargained for while on a midnight date in the woods. Thankfully, she discovered an antidote which prevented her transformation. She’s more cautious now, but her position as the local barkeep gives her a front row view to the wondrous world of werewolves without the risk of injury.