Hey everyone, Zerbu here! I’d like to introduce you all to my custom modding tool: The Sims 4 Mod Workshop.

First of all, for those of you not familiar with the file formats that will be mentioned in this post, I’ll run through them:

The Sims 4 Mod Workshop (or TS4MW for short) is a tool for modders which primarily performs cloning tasks on XML and DATA files. Without the tool, you’d have to manually copy files, use a tool to generate a hash, and then manually alter the instance. The process was tiring, and huge mods were out of the question unless you had an insane level of patience.

With The Sims 4 Mod Workshop, all that’s a thing of the past. TS4MW allows you to perform a text search on XML files, and then with just a few extra clicks, the program will automatically copy the XML file and any associated DATA file to the assigned result folder, update the instance and name the file in a way that it can be quickly imported using S4PE. You could be spending hours less than you would cloning the files manually.

There is also a Mod Manager tool, which displays all XML files in your result folder in a way similar to the Clone tool (including optional search features), and contains buttons to quickly open the XML file in your default XML/text editor, or its associated DATA file in your default DATA editor, without having to open the folder in Windows Explorer.

The latest version of TS4MW allows you to clone up to 3 levels deep (with a command line code for removing the limit) for any content type. For example, you could clone an aspiration track, its category, its reward trait, its levels and all its associated goals all in one use of the cloner tool. The references are automatically replaced, even the ones in the DATA files. You can also clone STBL strings and copy them into the tool’s built-in STBL editor, so you won’t have to rename every piece of content manually. 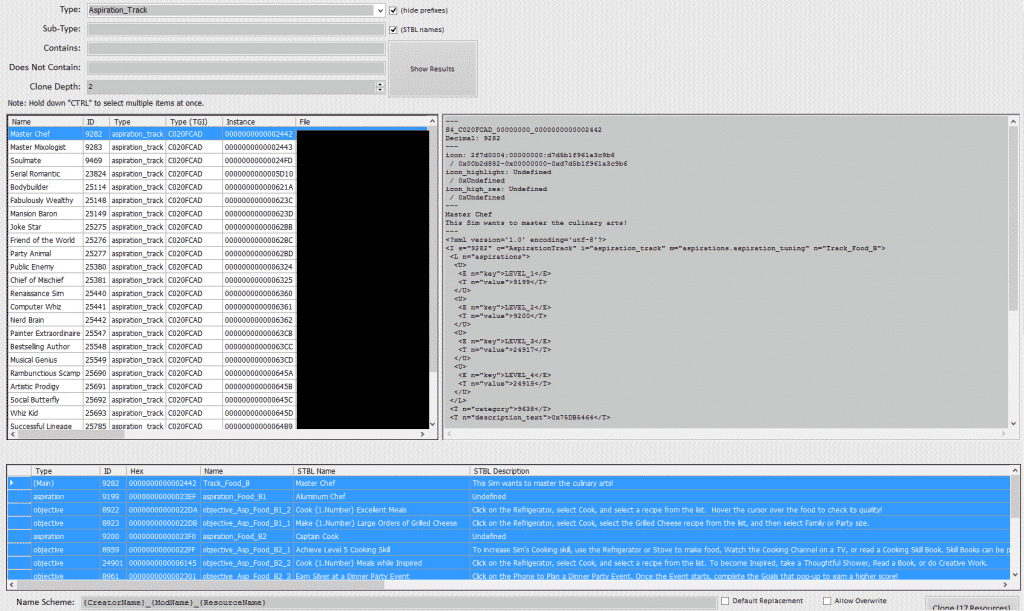