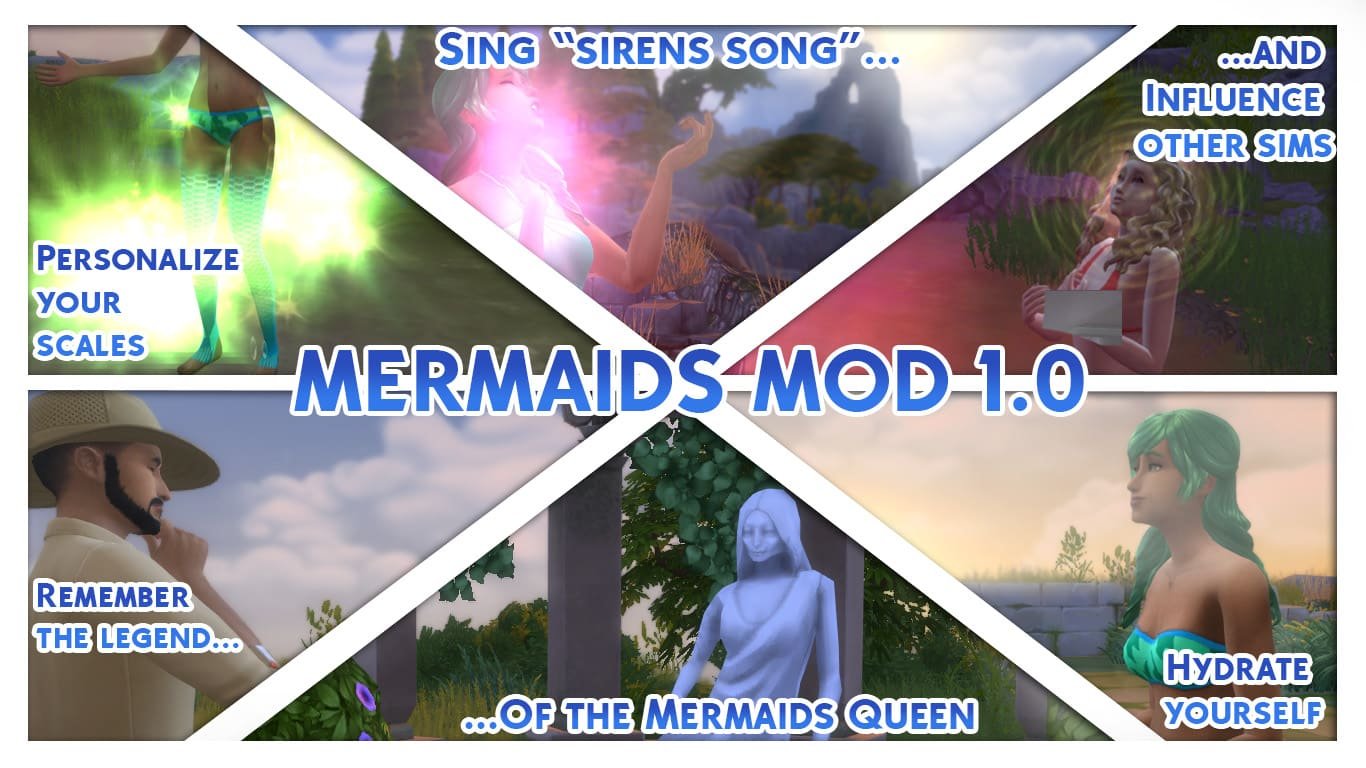 The Mod creator Nyx has created two amazing occult mods for The Sims 4.

The mods work with Base Game so you don’t have to worry about having anything else. 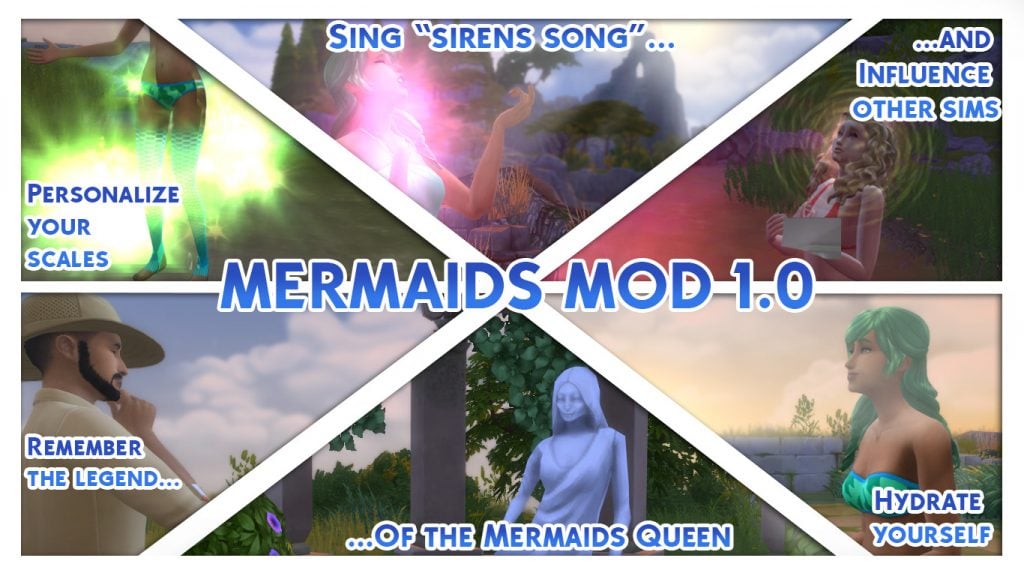 -What are the features of the Mermaids?-

Hydration need:
– Let’s start with the hydration need, which will replace Hygiene. This need can be filled by swimming in the pool, taking a shower, taking a bath, going on a water slide, etc.
With advantages though, come disadvantages because the Hydration need decays much faster when staying outside during daytime! Normally you’d have to spend most of your time near water sources but, to make things easier, I made sure that everytime they use water and then they don’t use it anymore, the “Hydrated” (+2 Happy) buff, which lasts 4 hours, will appear and will slowly fill the hydration need. If a mermaid doesn’t care about their hydration they will pass 2 stages before dying:
= The first buff to appear when low on hydration is “Chapped” (+2 uncomfortable), which will make the sim to have a “pretty dried” skin. They will also walk slowly.
= The second and last buff is Dehydrated (+50 uncomfortable), where the sim will almost nearly die. They will have a “very dried” skin and will be unable to use the pool.
After the mermaid passes these two stages, they will die from dehydration. So take good care of your scales, or else…

Scales and Tail:
– Mermaids have the ability to change the color of their scales! You’ll just have to select the color under the menu “Change the color of your scales” in the Mermaid pie menu.
The tail, of course, will follow the same color scheme of the scales. There are 6 colors in total. Another thing with the tail, is that they appear only in some specific locations during specific actions!
For ex. Mermaids won’t have the tail when they are in the shower, but they will if they are in a bathtub. When a mermaids jumps in the pool it might take a bit for the tail to appear, in case it won’t, do “swim laps” and see if that works.

Singing ability:
– Mermaids have one more interaction, that is “Sirens melody”, where the sim will sing some notes very briefly. This has effects on other sims (from teens to elders), in fact they will have the “Such a Wonderful voice…” (+8 flirty) buff which lasts 4 hours. Not only when they observe the mermaid, they react by doing a “melted” animation, but they will also accept almost every flirt from the mermaid.

To read more and download the Mermaid Mod head over to the page here! 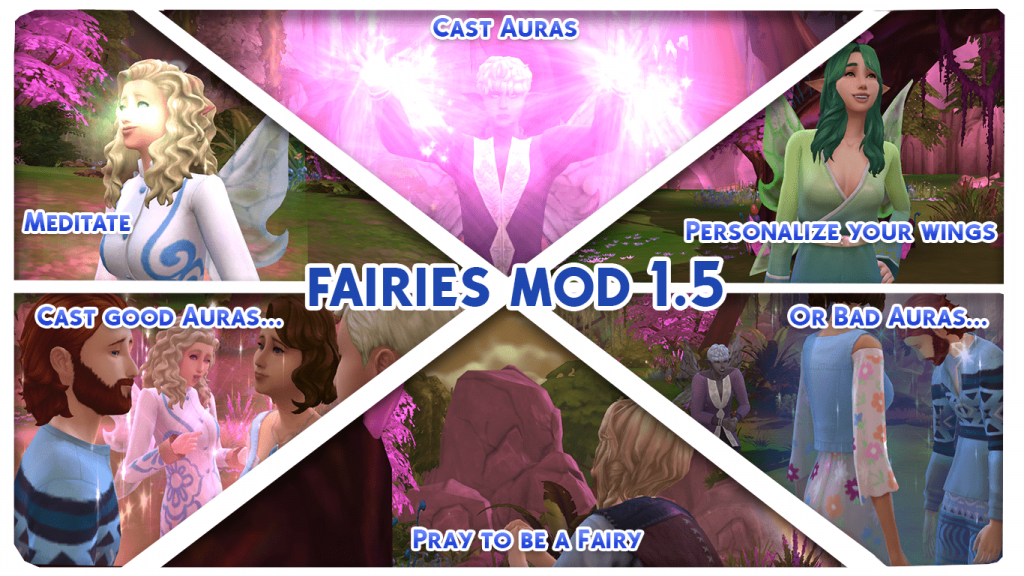 -What are the features of the Fairies?-

Yes, you can now control a new occult, that is the fairy life state. Fairies have some changes and bonuses:

– They have a pair of wings and pointy ears! (NOTE: You can’t wear a hat as a fairy. Sorry…)
– They have 1 new interaction, that is “I Can Fly!” (Interaction [not animation] from the Sims 3 Supernatural) where they’ll fly around increasing the fun need.
– Most of the time, they won’t walk, but fly! (NOTE: They will walk when feeling bored, uncomfortable and energic. They will also walk if they have a custom walkstyle! So make sure to give them the default walkstyle in order to fly!)
– They will perform a special idle animation from time to time.
– Their fun and social will drop slightly faster than normal.
– The Mischief skill now develops MUCH faster! Fairies are really mischievous!
– They will occasionally have two buffs:
= “Feeling Playful” (+3 playful)
= “Where’s the fun?!?” (+4 Bored)
– Children, Childish and Insane sims will continuously react when they see a fairy receiving the “Wow! A Fairy!” (+6 happy) Buff for 6 hours (NOTE: After the buff expires they will have it again if they see a fairy again)
– They will have sparkles behind their back! (NOTE: They might disappear sometimes, but don’t worry they will re-appear if you change the lot or go in CAS)

To read more and download the Fairies Mod head over to the page here!

If you want to know how to download Mods and CC head over to our handy guide!

Would you want Fairies and Mermaids to be made into a Game or Expansion pack? (Like Vampires) Or what other occult types would you like to see? Let us know in the comments below!

Please note these are for PC not console.