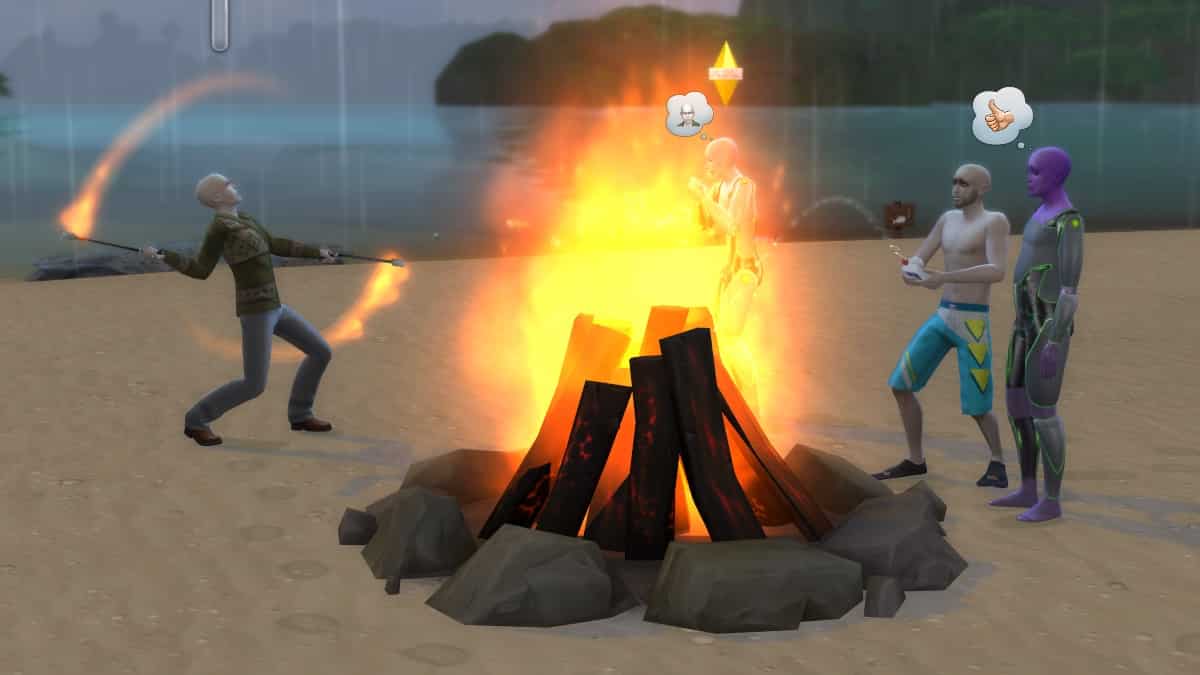 A while back, while casually tearing-down the newest trailer of Sims 4 Island Living and trying to guess what we were getting (which included mermaids) on TheEnglishSimmer’s discord channel, a username by the name of “Tazzykiki” said: “Imagine the chaos if we had hybrids. Imagine an alien-vampire-mermaid-ghost-sim who turned into a PlantSim.” An idea was born: Why doesn’t Sims 4 have hybrid life states?

Both Sims 2 and Sims 3 had hybrid life states. Sims 2 had the perfect balance and was an important hidden feature to a point where if you turned a Servo into a Vampire (don’t ask how that works), it would have a unique appearance designed specifically for that hybrid. Sims 3 was as far as I know bit more unpredictable, with mostly UI issues, but otherwise fully functional, and we had NRaas come to save us with one of his mods fixing hybrid life states, which in all honestly just meant it was fully possible to do so.

On paper, the first thing that popped to my mind to the why is that it’s just an engine limitation. That it’s just not in the engine’s nature to function properly. I expected that the game would just glitch to the max, break the game entirely, get errors, and eventually crash.

The first important thing of note is to understand how Maxis seemed to have designed life states in Sims 4; the game runs entirely on the moodlet and trait system to influence the sims behaviours. Things like a walk-bys “random mood” is nothing but a powerful random moodlet, and things like a pet’s “quirks” are traits. The difference here is only that these are usually hidden. Heck, even most of the Reward Store options are just traits and many traits assign hidden moodlets.

Occults are no different. They are in fact, traits. While these don’t show up on the traits panel, they can be seen in the Club’s Trait Requirements menu, and show up as Alien, Mermaid and Vampire traits. I didn’t bother testing Ghosts and PlantSims because Ghosts are a natural hybrid (I mean, I doubt you couldn’t have an Alien-Ghost or a Mermaid-Ghost), and PlantSim isn’t a complex enough life state (not to mention it’s temporary).

My general idea for this experiment was to push the game’s limits, in hopes of breaking it, but to my surprise… nothing really did. These hybrids seem to work, and this infuriated me a little bit, which I will explain in the conclusion.

The basic interactions, worked fine, an alien could absorb another sim’s emotional state. A Mermaid could call on a weather change, and a Vampire could move about as a bat, run fast, and I’m positive Vampire weaknesses worked fine (I didn’t play long enough to see their effects). 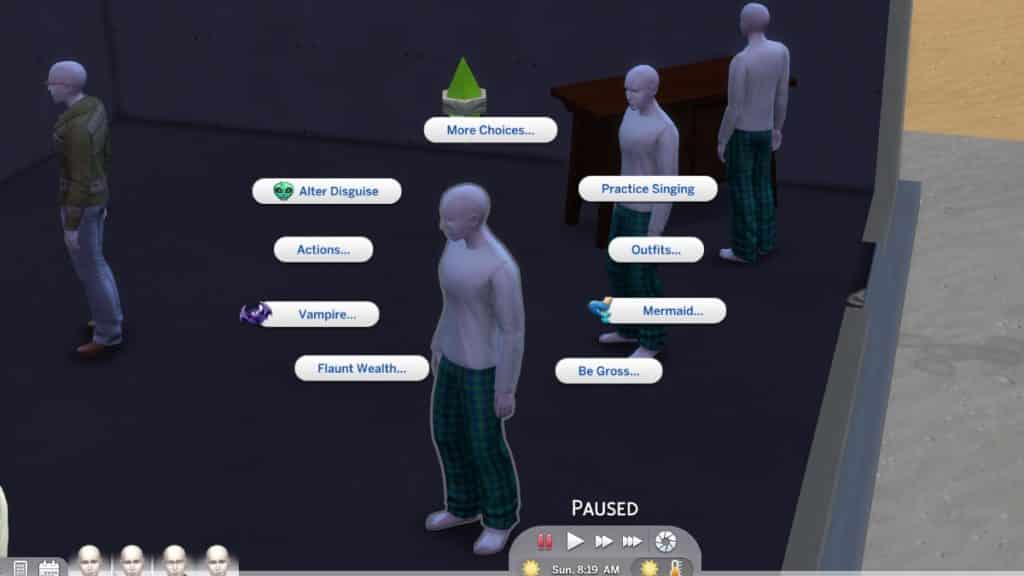 The interaction menu displaying the sub-menus for Mermaids, Aliens and Vampires perfectly.

However, I fully expected these to work, since after all, they are just basic interactions and aren’t anything complex. It’s their unique characteristics that I was curious to see how they would work. Mermaid’s surprised me the most, as the tail would show up just as expected. Aliens also seemed to have worked, since once I equipped the Alien occult trait, the game would automatically assume we were in our disguise. When it came to Mermaid/Alien is where things got interesting, but only in the bath. If we are to remove our disguise and get in the bath-tub as an alien well… the legs just don’t work like they used to. 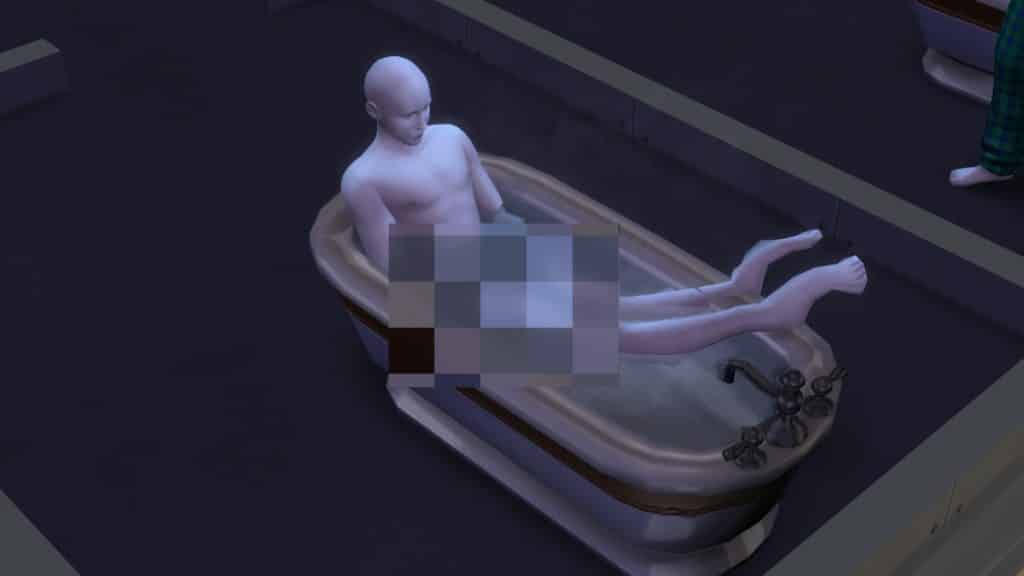 That’s not a tail my dear Watson.

But I was pleasantly surprised to see how this affected a mermaid’s ability to swim in the ocean. The Alien simply turns into a regular Sim, and swims like a regular Sim, simply omitting the mermaid tail. This was a pleasant surprise, since I expected the mermaid to just break with having human legs but on a mermaid rig Vampires did however break when turning into their dark forms for the most part. As far as I recall, I managed to get an Alien looking like a Vampire (with the dark form features/make-up), and for the most part, the game did get confused as to what was what. From the point of the User Interface, Mermaids break Vampire Panel, and that’s about it. It’s surprising to see that the Vampire Needs Panel has a perfectly working “hydration” motive. Aliens don’t have any changes in needs. The only issue I encountered is realizing that a Mermaid/Vampire loses access to the Vampire Power and Rank section of the Need Panel. But that was the extent of it. You could still access it, and it still functioned properly. Which, again, was to my pleasant surprise since I genuinely expected the game to just not even open the panel.

I didn’t even encounter any major issues in the Create A Sim, although a sim did magically disappear from the screen at one point but seemed to return even if I edited his name once I left CAS. I remember in my first test run with Alien/Vampire that the forms eventually got confused when I tried editing, but honestly, as far as I can tell, the game just keeps generating new forms if it seems to lose access to one (now I obviously don’t know if the others are lost or purged or if they linger around a sim). 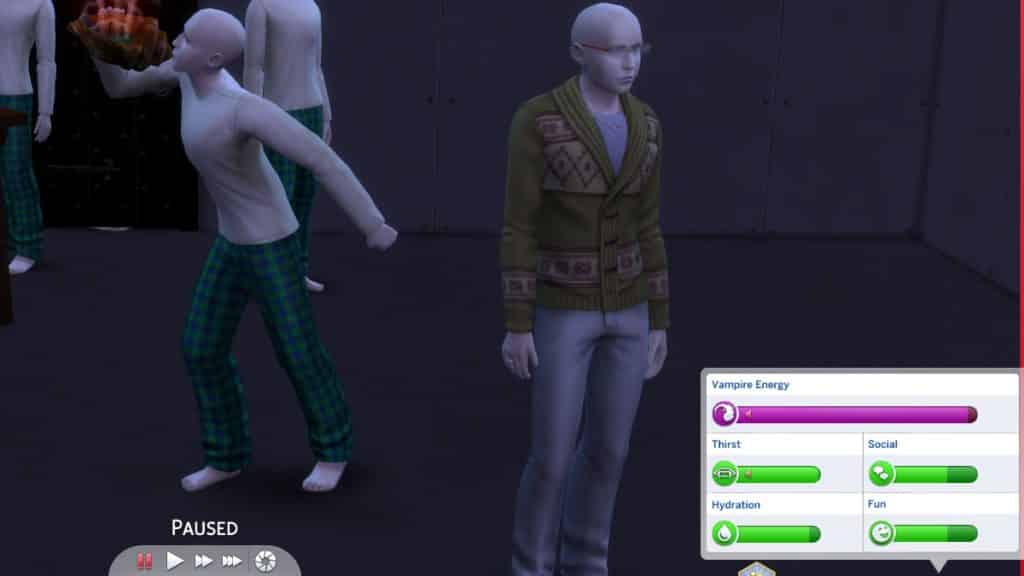 But honestly? The Hybrids seem to work? They’re not even THAT glitchy enough to not warrant some work. In my opinion, the game is fully capable of handling hybrids without major issues. Forms is the only thing that needs to be fixed and that’s pretty much it.

After all we have so much customization options that it would be up to the player to determine how a sim looks, and even so, you could survive on four unique appearances, a Dark Form, a Mermaid, a Normal Sim, and an Alien Form. You have easy access to Vampire details as a Mermaid already anyway, and I’m sure you could mix and match various effects between forms. I am geniunely disappointed that hybrids are not a thing in The Sims 4. The game didn’t outright break. None of the issues I encountered felt like they were game-breaking and could be easily fixed by the team. 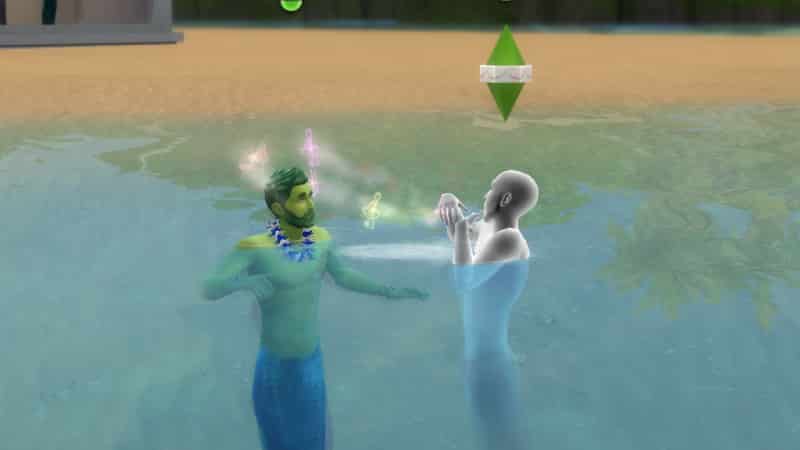 Mermaid mixed with PlantSim and a Ghost

Quite frankly I’m infuriated because this feels like a massive missed opportunity, and another step-back from the features we were used to in previous games. I understand that this is “a new game” and that the rules are different, but lately it’s become quite apparent that numerous corners are being cut with Sims 4 and I simply can’t understand why such capable team of developers keep making these decisions. The engine is not a limit here. I get that Sims is in general a complex game, but this feature is more than capable of existing.

I also feel if the team managed to get unisex gender and clothing options, there’s nothing stopping them from literally unlocking the Alien features across the board, including on the normal Sim form, they could merely disable it being used in “randomizing” Sims at townie creation, but why not let Simmers use Alien eyes on a normal Sim? Or a Mermaid? Or a Vampire? I also think that one thing that infuriates me is that it’s not just a simple oversight on the developer’s side, but that they outright said that “hybrids are not possible”. Or that they are difficult, or something along those lines.

I hope you found this article interesting, because it was quite fun experimenting and I do hope that we eventually see a change and see hybrids at some point down the line in the game’s future, among other things. 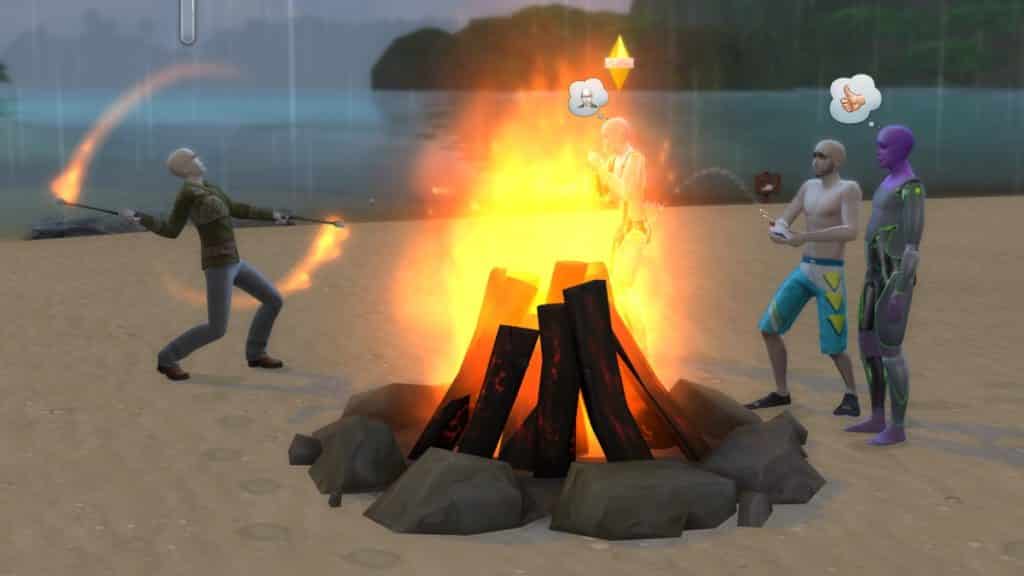 After a successful experiment, the boys relax by a bonfire.