Upon scrolling through Twitter, I came across a friend of mine who had posted a screenshot of their Sims bedroom. The first thing I noticed was the crazy amount of Star Wars custom content they had decorating the walls. So, of course, I immediately needed to know where it came from and thankfully, they had credited the creator below.

I won’t lie, I am not typically a person who uses Buy/Build mode CC and that’s only because I like to share a lot of my builds on the gallery. But, when I downloaded this Star Wars Stuff Pack, I was blown away by how much of it I would actually want to keep and use in my game. The patterns aren’t overly alpha (I am a Maxis Match junkie) or in your face. There were plenty of items (55 to be exact) that my Sims could use in their everyday lives and lastly, it was Star Wars stuff. Why wouldn’t I want that in my game?

After reviewing the pack, I went right back to Twitter to contact Jessie about a possible interview and to my luck, she responded and we were able to set up a quick chat.

This interview has been condensed and edited for clarity.

Grace: What got you into The Sims and how long have you been playing it?

Jessie: Back when I had a Playstation 2, I had the Sims 2 on it, which I enjoyed playing quite a bit. I don’t have a lot of memories of what/how I used to play back then. I think I may have added Snape, Lupin and Sirius Black to my games as Sims, and that that was the sort of style I played.

I got back into it very recently – around mid July – so that’s about seven months ago? Now all the sequel trilogy Star Wars characters are my victims of choice when playing the game. Hux, Rey, Kylo, Rose, Finn, Poe, Phasma, Kaydel, Mitaka, Thanisson, Wexley… and also Jyn and Cassian from Rogue One. I absolutely fell in love with their versions that I found in the gallery, courtesy of Rloca. And there’s also a fantastic Qui Gon Jinn out there by TurretDove. He’s the only one out there, but he’s so good looking no one ever needs to make a new one.

G: What got you into creating mods for the Sims? Are there any mod creators that inspired you?

J: I was playing with Star Wars characters (Rey, Hux, Kylo Ren and such…) and wanted a hairstyle for Rey. Luckily, Boostersims on Tumblr had once made a hairstyle for Rey, so I went to download that one. I was surprised by how easy it was to set up, but I’d never before made a modpack in my life, nor was I immediately considering creating some.

Then I wanted more Star Wars mods, so I downloaded some item frames that I found online, but that was about it. And the pictures were from the original trilogy and I preferred the sequel trilogy – so I was a little upset that there wasn’t more out there! I wanted to have content for the characters and movies that I enjoyed too.

I saw JamesTurner’s video on how to make custom portraits and was like, “What?? IT’S THAT EASY?”

I already had photoshop skills, so that wasn’t something I had to learn. I only needed to learn how to work with Sims 4 Studio, which was very easy. So, I made a bunch of portraits at first that I could hang in my own game. Then I thought “What else can I do? How far can I take this Star Wars stuff?” and I just kept on creating. I added carpets, beds, and then began to look for even bigger challenges.

My favorite items (from The Star Wars Stuff Pack) must be the Death Star Bar (pictured below) and the little Porg television. 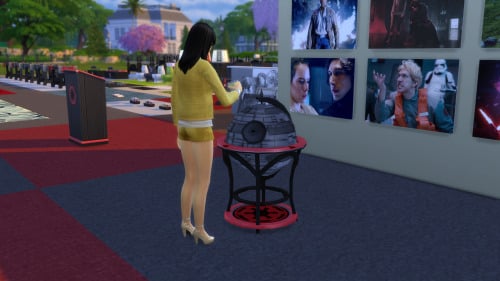 G: What made you want to make Star Wars content for the Sims in particular?

J: As I kinda already said above, I basically wanted to emerge myself even deeper into the Star Wars part of my game. I share a lot of screenshots with a small Star Wars discord where folks were interested in seeing what adventures I put the Star Wars characters through. They loved following the stories I played and were into the shipping part of it. I’m a multi-shipper, so they never quite know who Rey is going to end up with, or what I’m gonna do with Phasma, Rose, or Poe – and they love seeing the scandalous things the Sims do. At one point Rey was cheating on Kylo with Hux. Something that would never ever happen in canon, but that’s why the Sims is so much fun – anything can make sense if that’s how the game goes.

For those that were following my stories, it was also a lot of fun to spot easter eggs, like “Oh, is that a Hux portrait in the hallway?” It gives them stuff to look for that is visually appealing to them, since they’re Star Wars fans. It’s especially pleasing if they spot a small detail, like “Is that chair covered with a Star Wars pattern?” and even more fun: “Is that in the game, or is that part of one of your mods?”

G: The CC that stood out to me the most, created by you, was your Star Wars stuff pack. Is there anything else you make aside from that?

J: No, not yet at this point. It’s all Star Wars for me! Oh, and tiny houses in the gallery. I loooooved tiny houses even before the tiny living pack came out – so getting buffs for making my sims live in tiny houses? Heck yeah, I love that!

Though I have to be honest and admit that I got close to working on Fallout jumpsuits at one point. I had made a Fallout base, and wanted my sims to live in there, but simultaneously I wanted 20 people to live in there, and I’m certain it would have crashed my PC, so I gave up before I actually got around to playing with any characters in that base. (The underground base is still up in my gallery though, if you wish to explore it.)

And if we’re talking about non-Sims-creations, I write fanfiction too, and I photoshop a little bit. I’m also going to Star Wars celebration and will be creating swag to hand out to other Star Wars fans there. I love how The Sims allows us to take control of our own fandoms – a bit like fanfiction does as well!

G: Other than mod creating for the Sims, is there anything else you do with the game? Ex: building, cas, story/challenges?

J: I love sharing stories of the Star Wars characters with my friends in discord, and I love the Rags to Riches challenges. At some point this is also what pushed me into developing all the items that are into the first version of the modpack. I wanted a modpack with items that you could use in a rags to riches challenge. As in you could put a Sim on the street with no money, and all they would be allowed to buy would be the items from the modpack, but they could still survive and make a living! It’s a challenge within a challenge, because not every cheap item you know from the original game will be available to them, so maybe they’ll need to invest in a more expensive shower if they want one at all.

At this point I’m playing a game where Hux wants to go to university, but he had a big fight with his dad, nasty Brendol Hux, who kicked him out. Now he’s living on an empty plot, with nothing but his bike and laptop. He wants to enroll in university and get a degree, but how is he going to afford all that? Not sure yet if I want him to make a tiny house for himself (I love how it gives amazing buffs to skill building) or if I want him to move into a dorm. We’ll see how it goes.

You can find a lot of my Star Wars characters in my gallery, look for CartoonJessie! But there are some great Star Wars characters already there like the fantastic Holdo and Enfys Nest. I don’t dare to upload them to my own gallery (that’s not good etiquette, is it?), but if you look for them, you will find them.

G: Can we expect any more awesome creations from you in the future? If so, care to share?

J: I stopped playing the Sims for a while, from about November to now (February). So in that time frame, I didn’t play, nor did I create anything.

However, I just bought myself University and Tiny Living (omg so excited about tiny living)! So I’ve been playing with my beloved characters again. Tossing them in new situations and forcing them through school!

So far, I’ve created a Han Solo outfit and also added a scar for Kylo Ren. 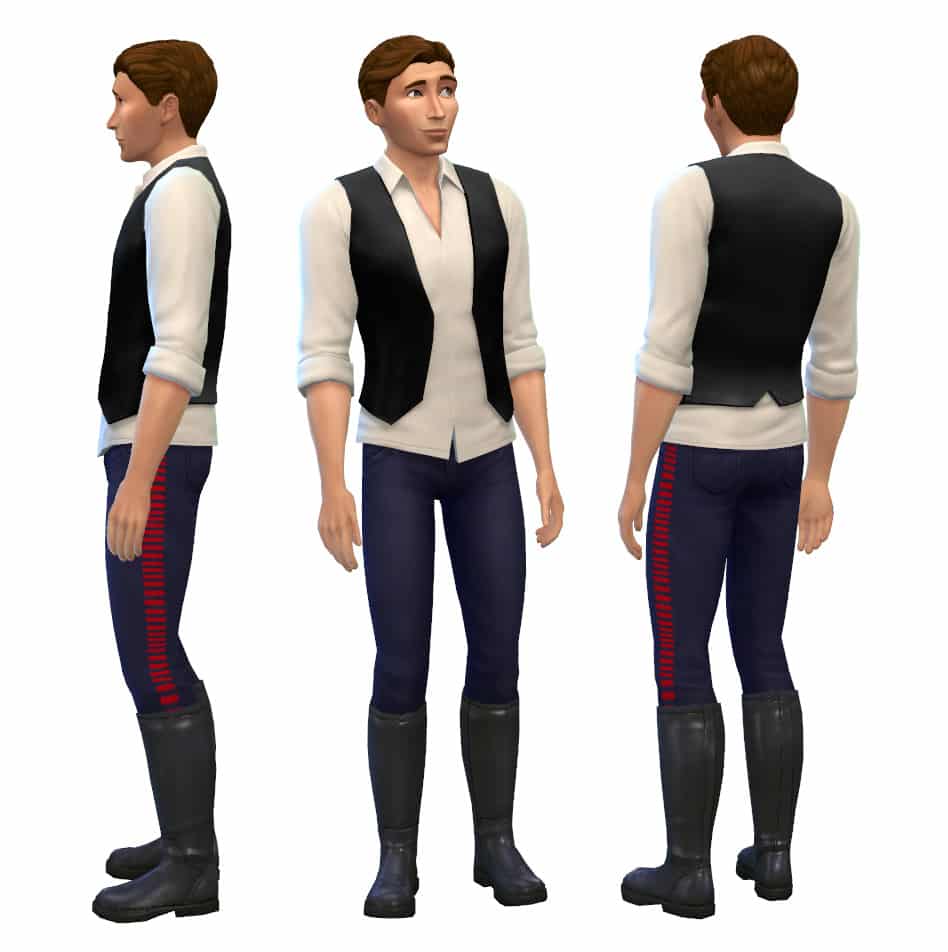 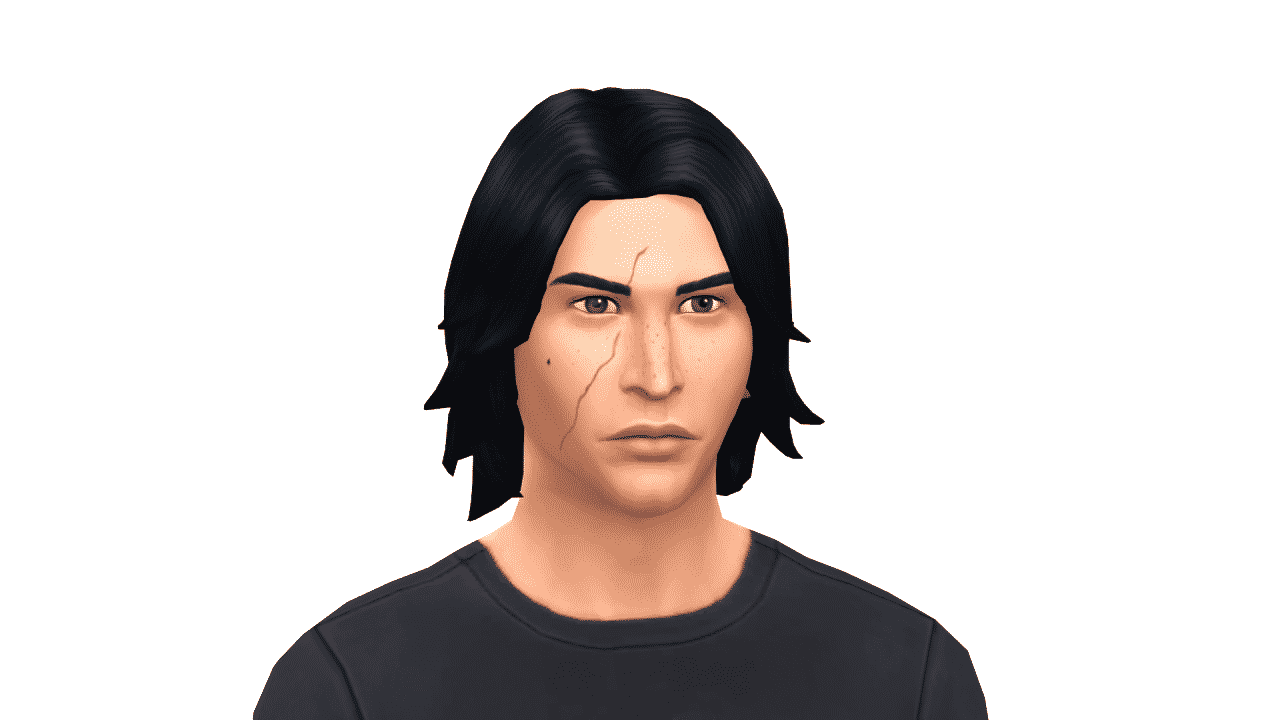 My photoshop skills allow me to create skins for everything I can find in the game, but unfortunately I have no 3D-skills yet. That skill might be something for the distant future; to pick up on how to model items in 3D so I can truly create items that are more than just recolors. I would love to be able to make Stormtrooper outfits, but I consider that to be one of the hardest things in the world. Once I succeed in that, I retire…

You can find Jessie and more of her creations below:

I also did a review on this pack on my Youtube channel, which you can find here.

Thank you all so much for reading and a massive thank you to Jessie for taking time out of her day to answer these questions. I’m honored to be able to spread your work throughout the community and I cannot wait to see what you have in store for us next. May the force be with you all, always.

Hello everyone! My name is Grace and I have been apart of this community for as long as I can remember, so I would be happy to assist you with any questions you may have regarding the Sims. I look forward to sharing my work with you all! Happy Simming!