Hi. I’m Dina Caliente. You may remember me from such titles as The Sims 2 and The Sims 3 Barnacle Bay.

I’m here today to tell my story. No, not that story. I had nothing to do with the Goth woman’s disappearance and I refuse to say anything more about that without my lawyer present! I mean the story that happened after all that unpleasantness. The story of my fresh start in the most unlikely of places. The loving arms of Death himself. Oh, you’ve never heard that story? Probably because no one ever wants to hear my side of things. Maybe if I wore a red dress and dyed my hair black, I’d get some attention around here! 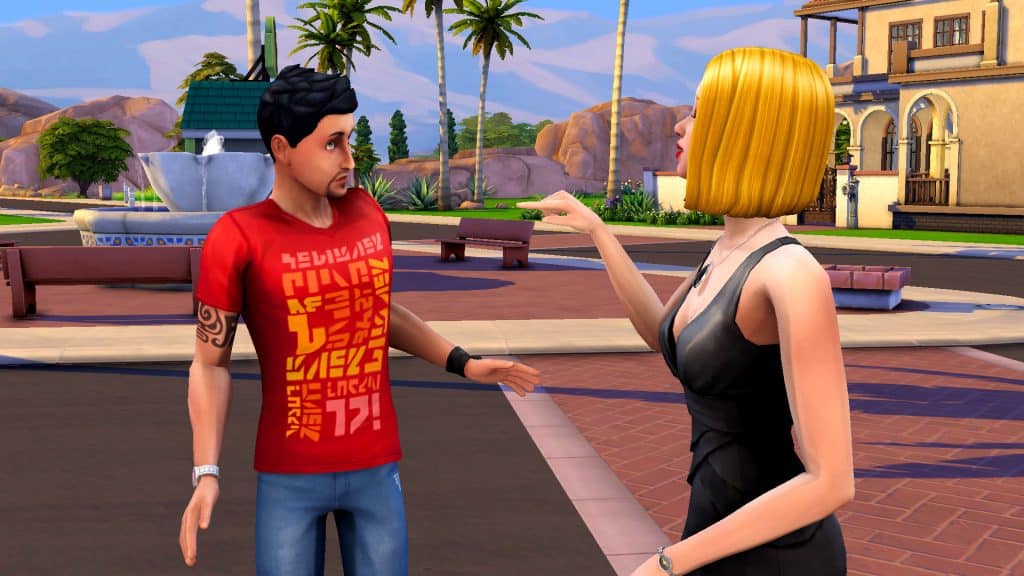 It all started on a beautiful summer day in Oasis Springs. I’d decided I’d had enough of living in my sister and my mother’s shadow and that Don was only going to keep bringing me down. I mustered up the courage to kick them all out of the house so I could turn over a new leaf. Well. I tried, anyway. That Don Lothario somehow always manages to sweet talk his way back into my good graces and he did exactly that. I thought one more romantic night by the pool couldn’t hurt, could it? I agreed to let him stay one more night for old times’ sake. 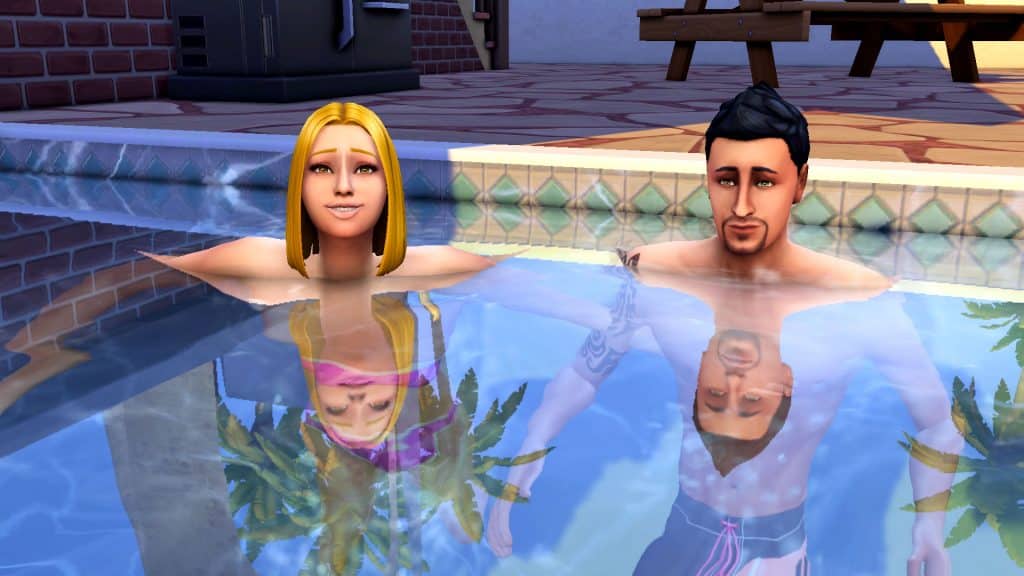 Don and I were having a lovely time by the pool until I decided to fetch some drinks for us. When I looked at the clock in the kitchen, I realised my favourite TV medical drama was having an all-day marathon today and I was missing it! Needless to say, I got a little distracted. By the time I realised six hours had passed and went outside, Don was… Oh Watcher, don’t make me say it! My poor, dear Don had tragically drowned!

Hm? What’s that? What do you mean, “How did that big fence get in front of the pool?” How should I know?! Ahem…

That’s when I saw him. The most alluring otherworldly being I’d ever laid eyes on had come to retrieve poor Don’s soul. My heart fluttered in my chest like it did when I met my first husband… whom we won’t speak any more of on the grounds that I may incriminate myself. Falsely, I might add.

I knew his job was to just collect his soul and go but I couldn’t say goodbye. Not without at least trying to get to know this mysterious figure. I introduced myself and the sparks flew instantly. I couldn’t believe how effortless our conversation was. We stood there over Don’s all but forgotten tombstone (Watcher rest his soul), laughing and enjoying each other’s company for hours. When he reluctantly grabbed his scythe and floated off to go to his next appointment, I had a moment of panic. What if I didn’t see him again until my own demise? I couldn’t wait that long. My soulmate was about to leave me alone for the rest of my life!

I called out to him. He turned around. “Would you like to stay?” I asked him. “Here. With me. Forever.”

With a slow nod, my love returned to me. He confessed that he’d been considering retiring and letting his apprentice take over the tiring job of reaping souls. That he longed to settle down with a house and a family and live out eternity as a mortal Sim but finding love as the Grim Reaper was difficult. Most people screamed and ran at the sight of him or were too busy mourning their lost loved one to contemplate a romantic evening with the reaper who took their soul. How rude. I was the first person to see past the intimidating exterior and get to know him. 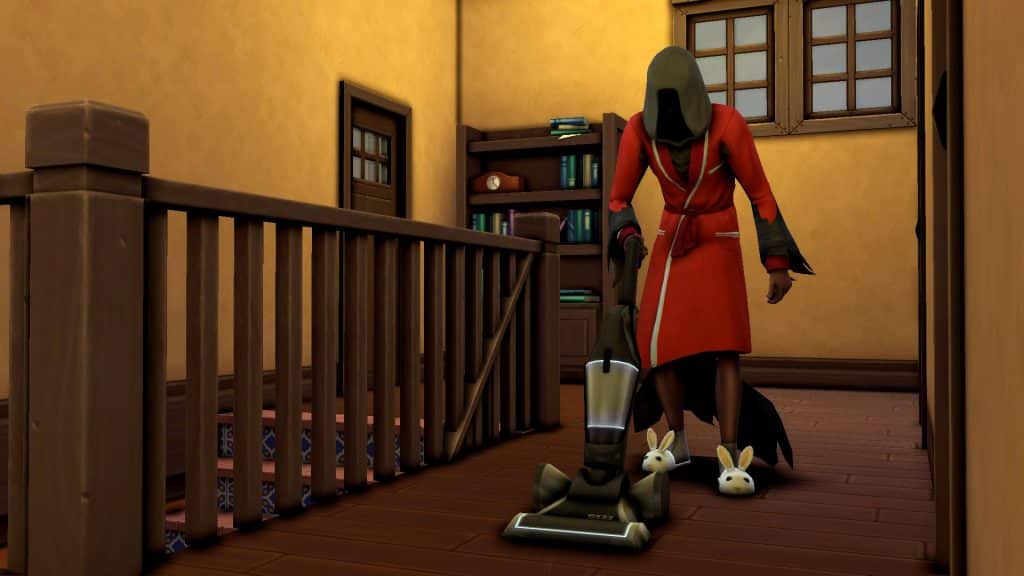 Grim, as I affectionately called him, moved in that very day. He loved doing everyday mundane things like cooking and cleaning the house in his bath robe and I loved watching him do all the house work for me. We were simply meant to be. I couldn’t say I was surprised when he got down on one knee and proposed to me not even a week later. Why wait? When you know, you know.

The wedding was an elegant affair, if not sparse. Not many people understood my love for Grim. They thought it was “creepy” and “morbid” but they know nothing of eternal love like we do. At least my mother and sister attended. I’ll never forget my mother’s words to me on my wedding day. “I guess this one can’t die on you like the last one, so that’s something.” Indeed, Mother. Indeed. 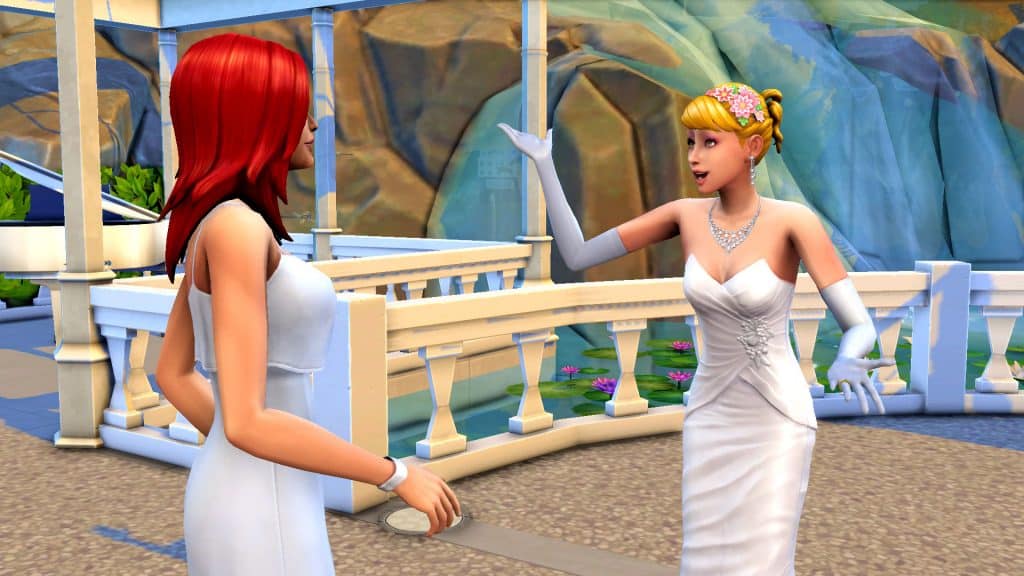 The night I became Mrs. Dina Reaper, Grim and I got started on having a happy little reaper family of our own. Did we move fast? Maybe, but I’ve always liked to live life like a roller coaster ride and my husband had waited long enough to raise a family. Several thousand years, in fact!

You might think the Grim Reaper wouldn’t have a nurturing bone in his skeletal body but you’d be wrong. Grim was the picture perfect father-to-be… until I went into labour and he panicked but you really can’t blame him for that. His job is the exact opposite of bringing new life into the world, after all!

Once our darling little Carolina Reaper was born, Grim was all smiles again. I think. I’ve never actually seen what’s underneath his hood and I’d rather not know. The mystery of it is exciting! She grew so fast, too. When she started to walk, we knew we had a Baby Reaper on our hands. Little Carolina left a trail of black smoke everywhere she went and she inherited her father’s eerie echo of a voice. Isn’t she just precious?

So that’s my story. The story of Dina Reaper and how I got my happily ever after straight out of the afterlife. They won’t tell you this story in any of the Sims titles but it’s the truth. I’d like to thank Don. Without him, none of this would have been possible. Rest in peace, Don. 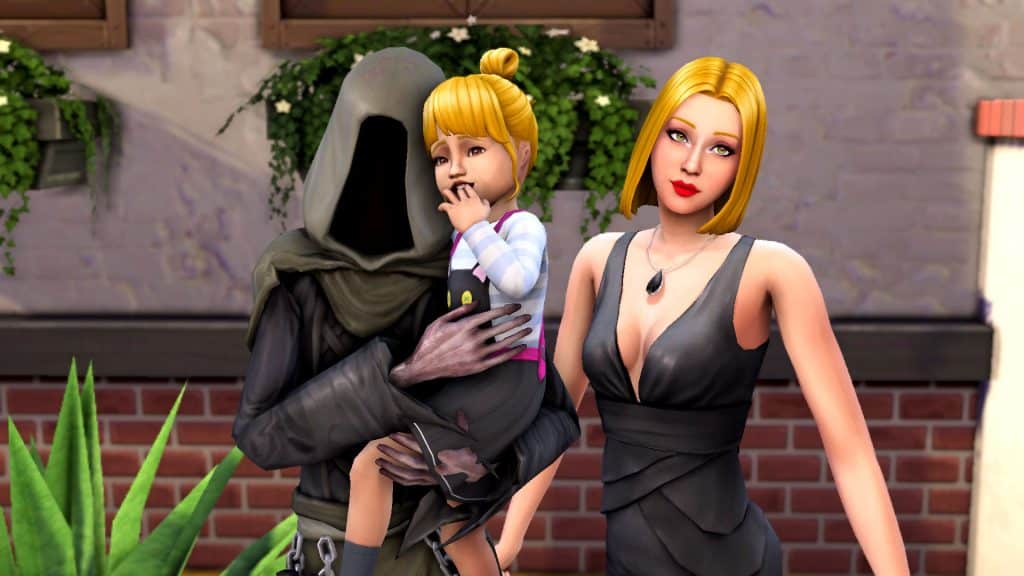 Mrs. Reaper’s lawyers would like to add to the record that nothing in this memoir is an admission of guilt and that the contents of said memoir are absolutely not admissible evidence in a court of law. Any apparent connection to any deaths and/or disappearances is purely coincidental and Mrs. Reaper claims no liability for any of the tragic events mentioned in the above memoir.

Want to learn how to have your own family with the Grim Reaper in The Sims 4? Go to the next page for a tutorial! No mods required, just a few in-game cheats.