Jason Willig, Vice President & Group General Manager for EA Mobile, shares our vision for bringing the magic of SimCity to a new generation of mobile gamers all over the world.

Two weeks ago EA announced some of its upcoming mobile games. I was excited that there was a lot of interest in SimCity BuildIt. Ahead of its upcoming launch I wanted to share more about the game, how it came into being and start to introduce the talented & passionate team in our Helsinki Studio that created it. I’d also like to address some of the questions that came up: Will it be like the PC game? Will it be free? Will the game be playable offline?

SimCity BuildIt lets you create and manage your own unique living, breathing city from the ground up while balancing the needs of your Sims to keep them happy and your city thriving.If you’re a mobile gamer, but have never played a SimCity game before, you’re in for a real treat. You can expect a gorgeous, engaging city building game that is both incredibly rich in terms of gameplay, but super approachable and designed for how you play games on your smartphone or tablet. 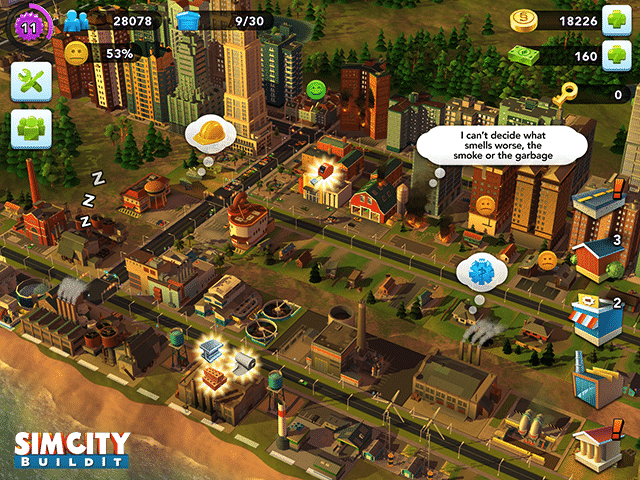 If you’re a SimCity fan, you’ll immediately recognize many iconic elements from the PC series. These have been reimagined for a uniquely mobile-first design…this is not SimCity “lite” for mobile, it’s a new/different SimCity experience compared to what you’ve played on the PC.  And while many of the coolest features do require an online connection – just like many mobile games – SimCity BuildIt does have an optional offline mode so folks can keep playing even if their internet connection is lost.

In bringing SimCity to the latest generation of mobile devices – and to a new generation of players – the team realized early on that they were going to have to take some risks. To be successful, we had to deliver on the things that make SimCity SimCity, but in a way that’s easy to pick up and play, satisfying in much shorter play sessions, and free.

From the outset we’ve been engaged in a dialog with our players…sharing our vision while getting to the core of what they love about SimCity and understanding what they’re looking for – and expect – in a new, uniquely mobile expression of this legendary franchise.

Die-hard fans will immediately recognize aspects of the PC game that inspired us, but these familiar reference points have been streamlined to make the experience more fun and manageable on touchscreens. There’s still a rich city simulation “under the hood” that drives the game…it affects the happiness of your Sims and the development of your city based on the choices you make. There are Zones, Roads and Traffic, Services, City Specializations and Data Layers. There are Disasters and Landmarks.

The game is rendered in gorgeous, real-time 3D with tons of attention to the little details along with the humor and whimsy you’ve come to expect. Into all of this, we are introducing something new: Crafting. Just like in a real city, players manufacture, consume and exchange all kinds of goods which enables their cities come to life, expand and thrive.

Over the next few weeks (when they are not heads down putting the finishing touches on their game) you’ll hear from the exceptionally talented folks that brought a unique & compelling vision to life. They’ll share more about SimCity BuildIt and why we think you’re going to love it. Stay tuned…