UPDATE: SimGuruKate has posted a tweet elaborating a few things about the upcoming Amazon Alexa Skill:

– It is tentatively scheduled to launch next week

– It will be launching worldwide but not in all languages

– It will be available on all Alexa enabled devices

During today’s Maxis Monthly Livestream The Sims Team has announced that they’ll be adding a special software that integrates The Sims with Amazon Alexa devices! This means that you’ll get to play Sims Trivia, Listen to Sims Music and learn more about The Sims straight from the Amazon Alexa device!

They’ve demonstrated each segment of this software specifically.

Opening up The Sims App

To open up The Sims App on your Amazon Alexa device, all you have to do is say “Alexa, play The Sims” to Alexa and you’ll be shown with the start menu of The Sims Alexa App. 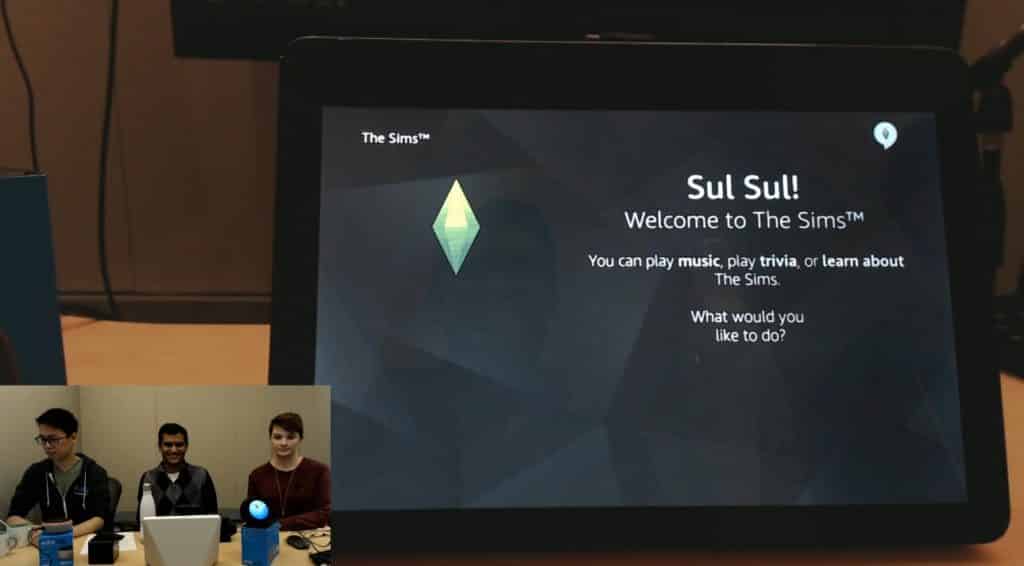 From the start menu you’ll be able to say play music, play trivia or just learn about The Sims.

Amazon Alexa can play all sorts of Sims Music from any Sims game – going from The Sims 1 all the way to The Sims 4 with all of the Expansion Packs included as well!

Alexa will also let you choose and specifiy which genre of music you want to listen from the Sims radio stations as well which is a really neat addition to the software.

Next up we have the Sims Trivia portion of this software which allows you to earn points by answering Sims questions asked by Alexa. These questions range from all The Sims Games and are divided into 3 categories:

You’ll also be able to specify how many players will be playing The Sims Trivia with you, as seen in the screens below:

The questions that Alexa will ask you can be very easy or very specific, depending on the difficulty that you’ve chosen. Plenty of these questions and answers were provided by EA Game Changers while plenty were additionally added by The Sims Team.

You can score up to 30 points if you answer correctly with the Casual and Challenge difficulties, while you won’t have a points cap nor a competitive spirit present with the Beginner difficulty.

Learn about The Sims

This segment will tell you all the basic facts and fun facts about The Sims Franchise that you need to know. It’s probably nothing you already don’t know but it’s still a cute addition for new players who want to learn more about the game.

So, you’re probably wondering, when is this software being added to Alexa? The Sims Team is hoping to release it next week, but do know that everything is subject to change.

We’ll make sure to keep you updated with all the latest news about when this app becomes available on all Amazon Alexa devices!

If you want to check this app out in action check out the livestream replay down below: