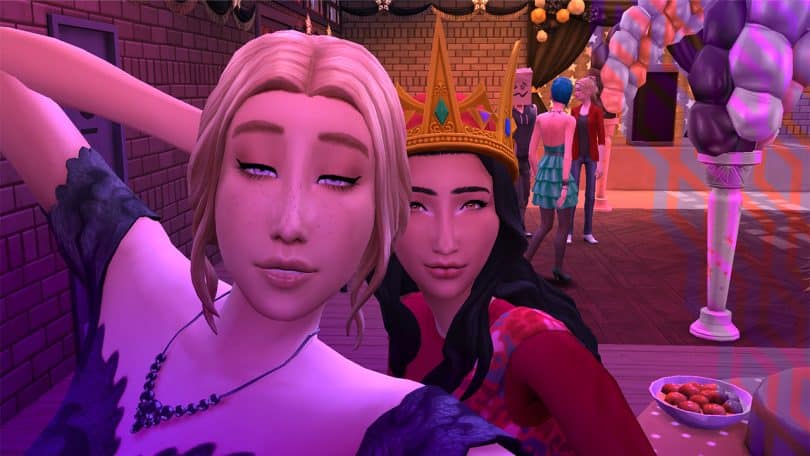 Everything you need to know about getting ready for prom night!

In The Sims 4 High School Years, teen Sims have a chance to attend prom. Depending on what lifespan you play on, they may have the opportunity to attend multiple proms. Teen Sims can make many lasting memories at prom with dates, friends, or on their own, and a lot of prep work goes into getting ready for prom.

We’re going to walk you through attending prom, from the preparation to the afterparties!

Prom is hosted at the auditorium lot every Saturday from 7pm-11pm. If you don’t like the idea of having to attend prom every weekend, you can always just skip it or pretend your teens are attending a general formal school dance rather than prom.

Starting Wednesday, you’ll begin to get notifications about prom while your teens are at school. You’ll be reminded to start thinking about who to take as your prom date and what outfit you want to wear to the event. Sometimes, you may be asked to prom either as friends or as a romantic interest by another student at school. Other times, you might need to take matters into your own hands and scout out your own prom date.

Of course, you could just walk up and ask them to go to prom with you. In fact, that’s the best way to do it if you just want to go together as friends but it’s much more fun to do something clever or grand, isn’t it? Apart from just asking your potential date, there are two additional ways to ask another student to prom. You can leave a note in their locker or make a flashy promposal sign and present it to them.

To leave a note in their locker, click on any locker in the school and select Leave Promposal Note. The locker doesn’t have to actually be the other student’s locker so don’t worry about remembering which locker they open between classes. You’ll be able to choose which student you want to leave the promposal note for. Then it’s just a matter of waiting and hoping. When the student does open the locker and sees the note, you’ll get a notification from them either accepting or rejecting your promposal.

To make a grander gesture with a promposal sign, just click on your Sim and select Make Promposal Sign under the Prom category. When the sign is finished, present it to the Sim of your choice! If all goes well, they’ll accept and you’ll have a date to the prom! If not, well, there’s no shame in attending prom alone!

As for picking out what to wear, you can always just go into CAS and put together your dream prom look using any installed content or custom content you have. You can also check out ThrifTea to put together a look using the shop’s inventory that day. Finding a prom outfit from ThrifTea’s limited selection might be more challenging but also more fun since you can go with your friends and make a day of it.

If your teen Sim has many friends in school, they might get invited to another student’s house to get ready before prom. This is kind of like a pre-prom party. If you accept, you and a bunch of other teens will travel to the home of the Sim who invited you several hours before prom starts. This is not a goaled event. In fact, it’s not really an event at all. You and your friends are free to do whatever you want together until prom starts.

When prom starts, you’ll be prompted to travel to the auditorium. You’ll arrive in your formalwear along with your date and other students from school. Prom is a goaled event so make sure you pay attention to the different goals in the top-left corner and complete them to get a good score and have a great prom night.

The Sims 4 High School Years doesn’t come with a dance floor object so to dance with friends or a date, click the stereo that’s there and select Dance or Sweetheart Dance. The Sweetheart Dance is a slow, more romantic-looking dance.

While you’re there, don’t forget to vote for Prom Royalty and Prom Jester! The voting box is in the auditorium and you can cast your vote for who you want to see win in each category. Unfortunately, you cannot vote for yourself but thanks to our writer, ThatSimsLady, looking at the tuning files for us, we found out that you can increase your odds of winning with high Comedy, Mischief, or Charisma skills. To be in the running for Prom Royalty, you need to have at least level 3 Charisma skill. Higher Charisma skill increases the odds further. To be in the running for Prom Jester, you need at least level 3 Comedy or Mischief skill. Higher Comedy or Mischief skill increases those odds.

If prom seems too short, you might be interested in attending an afterparty. That is, if you get invited to one. When prom ends, there’s a chance you might get a popup from another student, inviting you to attend an afterparty. The afterparty is pretty much the same thing as the preparty; an opportunity to travel somewhere else with friends and do whatever you want after prom ends. When we accepted an invite to an afterparty, everyone traveled to the carnival at the pier together.

Now that you know all about what to expect when it comes to prom, what are you waiting for? Go find yourself a date and an outfit and party it up all night long next Saturday!