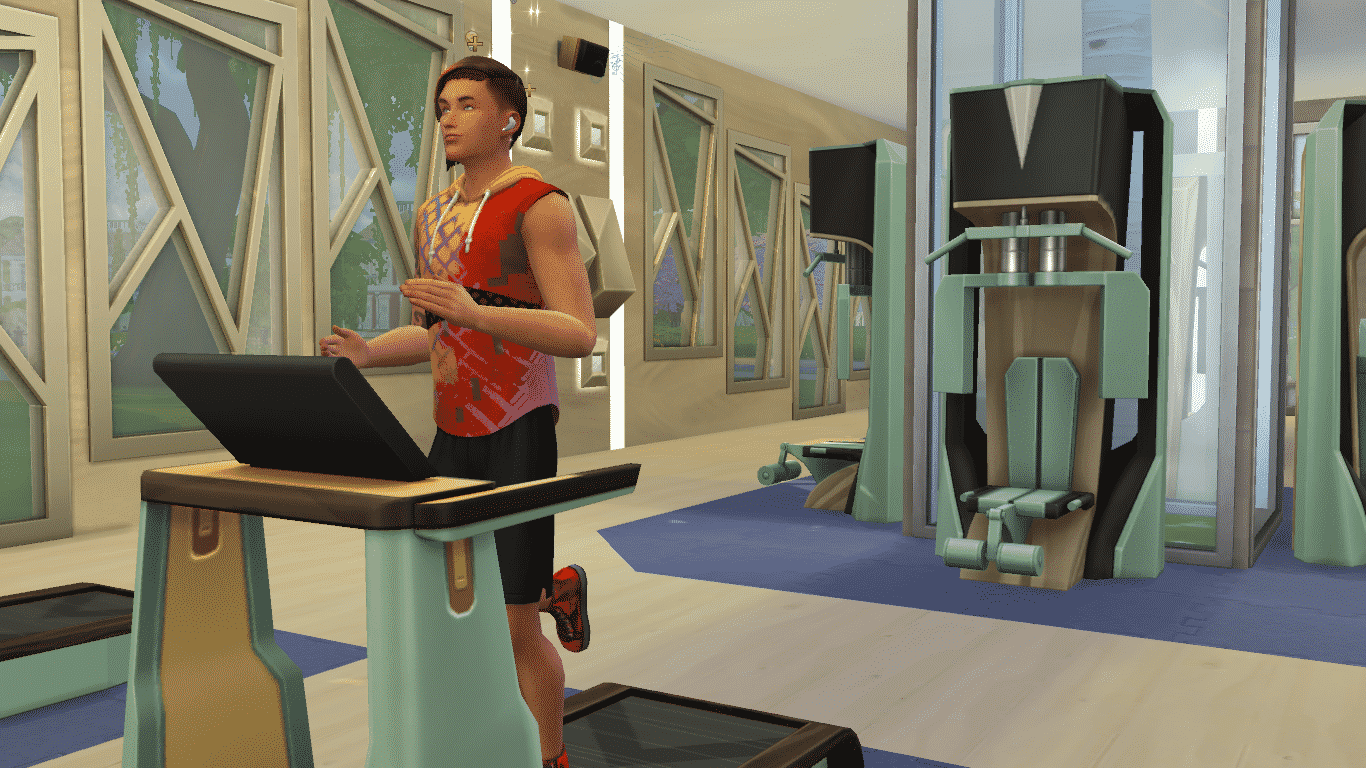 When I first learned that a fitness-related stuff pack was coming in June, I’ll be perfectly honest; I wasn’t too excited about it. I didn’t hate the concept. I could see why the Sims Team would want to expand upon this area of the game. It was old, stale, and hadn’t been touched upon since Spa Day. There was no doubt that gym-related activities were in need of an upgrade. I just didn’t think I would get much use out of a pack like Fitness Stuff. My Sims rarely go to the gym. If they do any kind of physical activity, it’s usually a yoga routine at home on their balcony or in the backyard. What could Fitness Stuff possibly have that would excite a Simmer like me?

Soon after, the gameplay items of the pack were announced; a rock wall and earbuds. I wasn’t too interested in the earbuds but the rock wall intrigued me. I wasn’t sold quite yet, however. I needed to see this rock wall in action for myself. It had to be a step up from the rock walls we’ve seen before in previous installments of The Sims or it wouldn’t be worth installing for me. I decided to watch the live broadcast with SimGuruGraham. That was I started to think Fitness Stuff would be a welcomed addition to my game, after all. 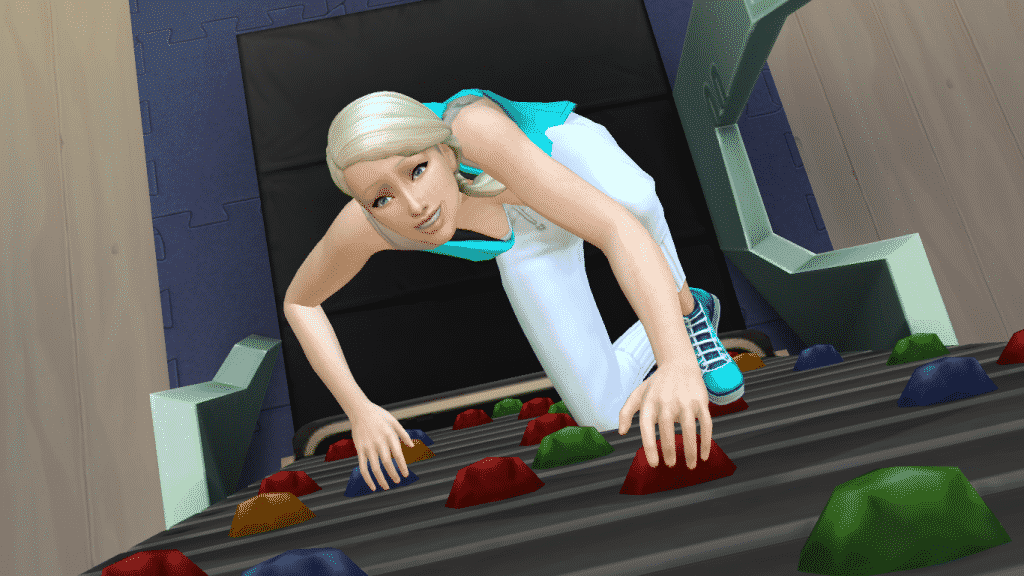 I ended up getting the pack and spent some time exploring everything it had to offer. It quickly became clear to me that I was wrong to be so critical of this pack. The Sims 4 Fitness Stuff added much more than some funky clothes and ultra-modern furniture to my game. It added a whole new way to enjoy the Fitness skill, which is a skill I became bored with years ago, but not anymore!

I expected the clothes to be stuff that a Sim probably wouldn’t wear anywhere other than the gym, but I was wrong. Many of the clothing items suit any Sim who wants to look fashionably laid-back and each item comes in a great variety of both patterned and coloured variants. My personal favourites are the polyester tank top with shoulder shrug and the tennis skirt, pictured below: 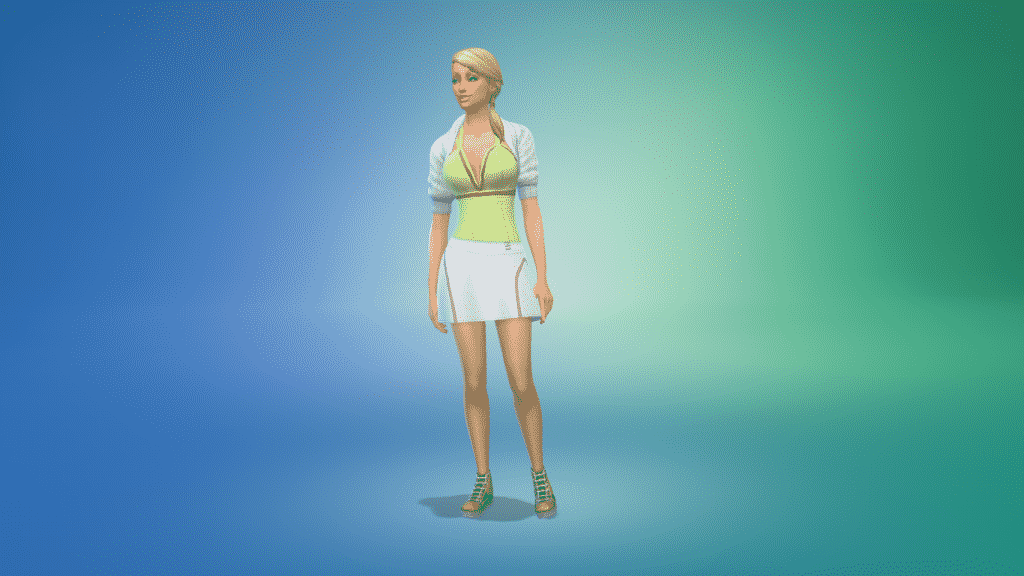 The hair that comes with Fitness Stuff is also a strong point of the pack. The shoulder-length dreadlocks provide the game with some much-needed diversity and the side ponytail is casually elegant. Of course, everyone loves getting new ombre hairstyles and the new side-buzz with a long flipped fringe delivers in that area.

Let’s put the CAS parts aside and jump right into the gameplay that Fitness Stuff offers. I can’t wrap my mind around all the hate for the rock wall. It. Is. So. Cool! The biggest reason I hardly ever sent my Sims to the gym was because it was boring watching them punch a glorified bean bag, run in place on a treadmill, or sit at the weight machine. Building the Fitness skill was tedious and mind-numbing. Do these three boring actions. Over. And over. And over again. Forever. It wasn’t exciting. It didn’t pump me up the way working out should.

With Fitness Stuff, I love sending my Sims to the gym. Watching them try to scale the rock wall is so much more entertaining! Plus with all the different settings (including a potentially deadly fire setting), their rock wall workouts are never the same. The fire setting really gets my adrenaline going because holy plumbob, what if my Sim dies?! The gym is an exciting place to be now and I love it.

The workout videos are also more fun to watch than the exercise machines and punching bag. I find myself bobbing my head and doing a little dancey thing in my seat while I’m watching my Sims work out to the videos. I’ve never been that engaged in my Sims’ workouts before.

As for the earbuds, there was a lot of hype surrounding them, but I feel like they’re the least exciting gameplay item in this pack. They’re just kind of… there. Your Sim puts them on sometimes and listens to music while they do stuff, which is basically what they always did before. They just needed a radio nearby. The fact that the earbuds are portable now doesn’t make much of a difference, but they do look good on my teens. Teenagers are always walking around with earbuds in their ears, blaring whatever music is hip that decade, so I like giving earbuds to my teenagers to make them feel more like teenagers. In the end, it’s more of an aesthetic appeal for me than a functional one. 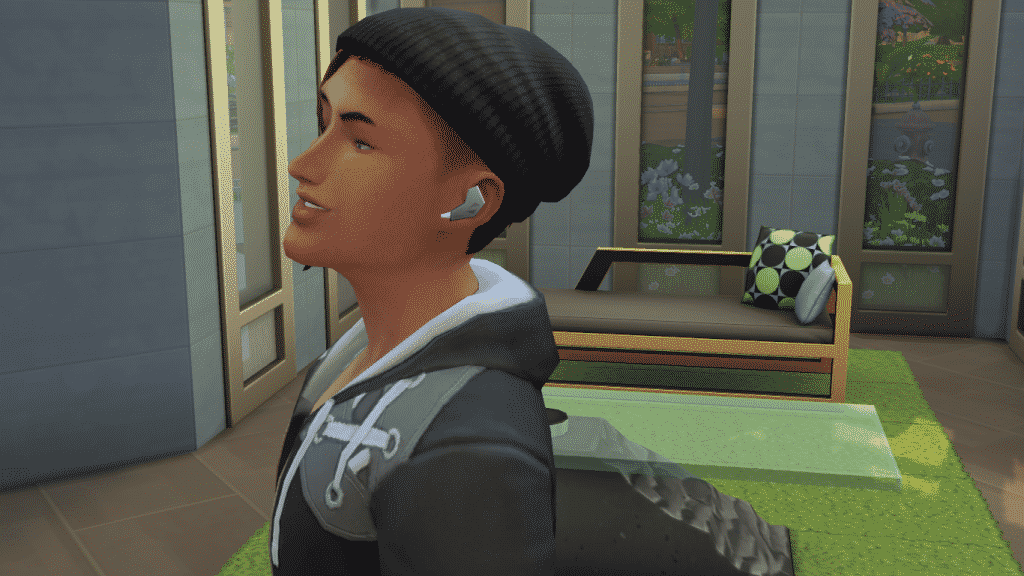 Does this mean that I love everything in Fitness Stuff? I have to be honest and say no. For me, the furniture and decor are the weakest aspect of this pack. It’s all very lackluster and unremarkable. It doesn’t look any different from any of the ultra-modern furniture we already had in the game. If you own Spa Day, you already have most, if not all of the furnishings in Fitness Stuff. They don’t stand apart from each other in any significant way. If you buy this pack, don’t buy it for the furniture because it’s really nothing special.

So, is Fitness Stuff the best stuff pack for The Sims 4 to date? In my opinion, no. In my mind, The Sims 4 Kids Room Stuff still tops every stuff pack we’ve seen so far, but The Sims 4 Fitness Stuff is still a nice addition to the game. It adds a new dynamic to your Sims’ workouts and gives them more of a reason to head out to the gym on a regular basis. Even if you don’t play active Sims very often, having this pack in your collection might change that and make playing these Sims worth your while.

What do you think? Have I convinced you to give The Sims 4 Fitness Stuff a chance? Let me know in the comments. I want to hear from you!

For a closer look at my experiences with Fitness Stuff, check out my article, The Sims 4 Fitness Stuff: A Day In The Life, where I take you on a fit-tastic adventure through the eyes of the spunky Baxter family!

Missed The Sims 4 Fitness Stuff live broadcast? No problem! You can watch the replay on The Sims official Twitch channel!