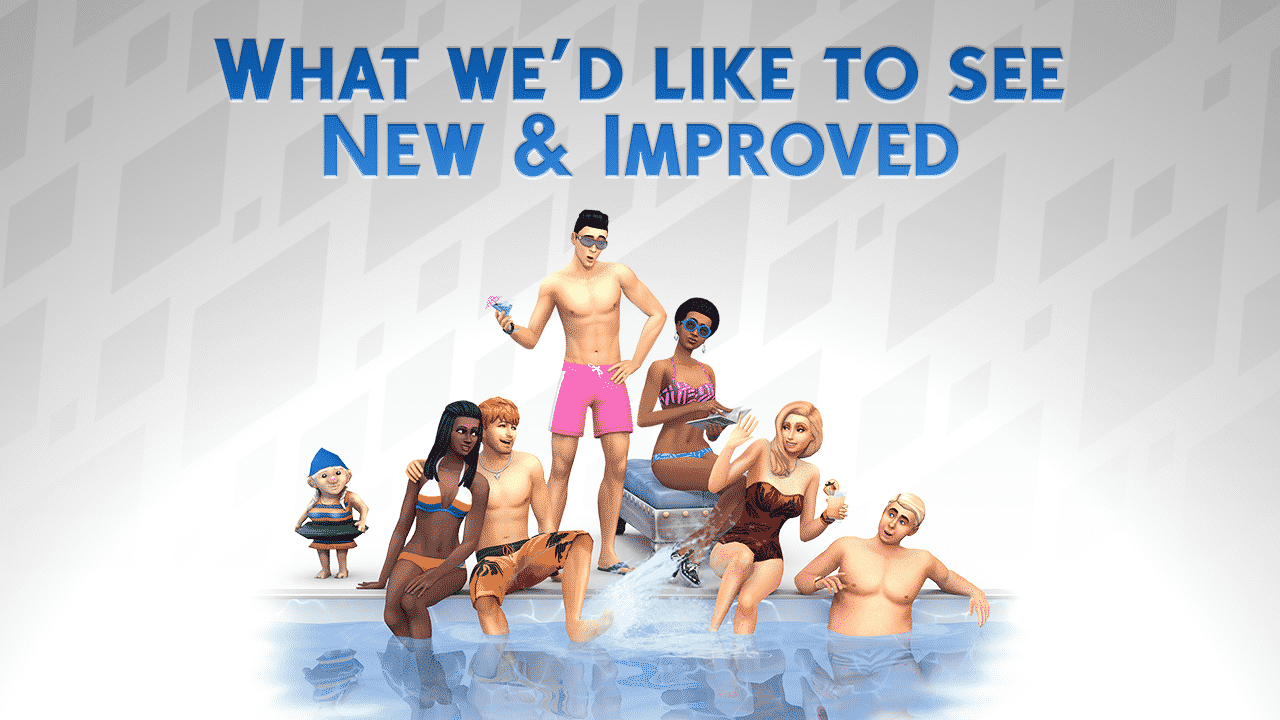 It’s fair to say that The Sims 4 base game has come a long way since its initial release and there has been so much added in for free, but there’s always room for improvement and I’ve put together a small list of things that I believe could be added into the game, check the list out and let us know what you want adding in the comments section down below.

The addition of pools to the game was one of the first major updaes to The Sims 4, it was a fantastic update and it was a relief to have them added back in to the game. The only problem is that it was missing some key features we were used to from previous games, we no longer had the curved pools which was a real shame and no longer did we have pool slides or diving boards, luckily diving boards eventually did get added but we’re still waiting on the slides. It’s not surprising these elements haven’t been added, curved pools didn’t arrive in The Sims 3 for severl years after the release and it was the same story with pool slides, so don’t give up hopes just yet!

This is something most of the community would love to see, recently one of the Guru’s tweeted asking if the community had any ideas on how cards could function in The sims 4. Many players assumed this meant they were working on them but as the tweet was asking for ideas it’s clear we won’t be seeing them for a while, but again, don’t give up hope because they are obviously interested in bringing them back.

We’re still missing a few core NPC’s in The Sims 4 base game, most of which have been there since the very start. The burglar was present in The Sims and many think it should be added in to the base game as it’s a vital part of the game, that initial shock and panic when the eary music started playing and you knew something was wrong. Police go hand-in-hand with burglars and should be added along side them, it’s another safe bet to think these two will eventually enter the game as it most likely wouldn’t be the hardest feature to program in. A fire service is another bunch of NPC’s we’d love to see, my guess is we will eventually get them again but as you can add sprinkler systems into your houses and put fires out yourself, it won’t be at the top of the agenda.

This is another huge feature that users want to see, a usual staple it was nowhere to be seen when the game was released almost 3 years ago, and it’s still not here. Several modders have claimed that due to the way The Sims 4 was built it isn’t something that could be added but we’re still hopeful, it would be a great feature and would go well with the intuitive building features within the game.

If you’ve ever had a pregnant sim you’ll know that the babies they produce are a little strange compared to in previous games, they act more like objects than sims and people have noticed. It’s clear many users just skip this life stage as it tends to be quite boring. This isn’t out of the question at all, there are already the animations for a baby in the game, all that we want is to have it separated from the crib, be able to move them around and walk with them, with the toddler update in January it’s clear the sims team are open to changing and adding life states so we should keep our fingers crossed.

Now you may be thinking that weather doesn’t belong in this list, it’s usually an expansion pack feature, well I believe it could easily be added to the base game. Seasons has been a staple expansion pack since The Sims 2 but originally weather was going to be added into The Sims 2 base game, so why not in The Sims 4? Seasons could easily be released as a game pack and adding weather in as a patch could be a possibility, it’s probably unlikely but it would be a great move by EA.

Do you agree with this list and what would you like to see in The Sims 4 Base Game? Let us know in the comments!