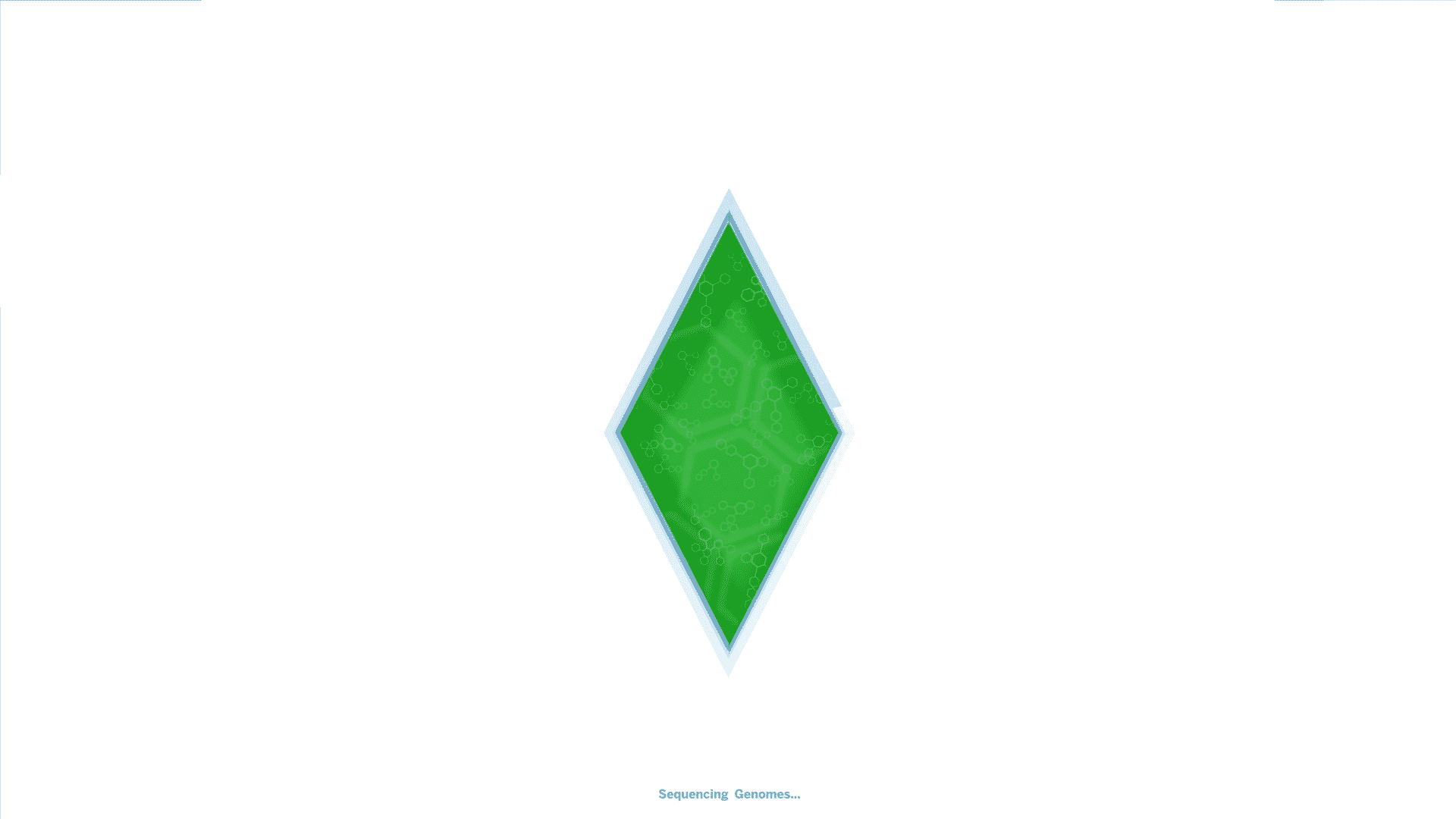 Installing the first version of The Sims 4 Base Game version wasn’t easy, but I somehow managed to do it.

After launching the game I was immediately greeted with the familiar main menu which is very minimalistic and features video clips of Sims doing things instead of a render with visual effects. 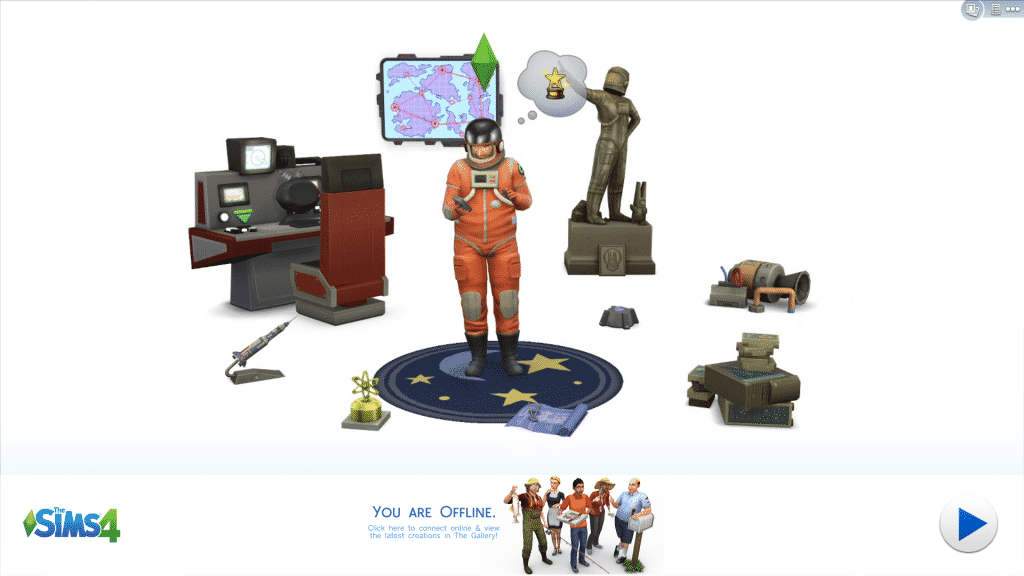 Immediately I noticed something off-putting about the first version. There’s something about font styling that’s very odd and disturbing, at least to me. There’s an unusal amount of spacing between    each    word    which    is    present    in    the    entire    game (I added extra spacing in the last few words to prove a point).

Moving on to Create A Sim, there are a couple of things I noticed that are missing right away and that’s Toddlers and Gender Customization. What was so apparent about the gender customization features is that I was only able to pick 3 voice types and not 6 like we can today. Same goes for clothing, hairstyles and other items which are exclusive to male and female genders.

What’s also missing is the Swimwear outfit category (because there were no pools back in the day) and the option to randomize Sims from the gallery. There are also 2 traits that you won’t find in the first version of this game and those are Jealousy and Kleptomaniac.

The whiteness of the loading screen really burns your eyes, especially if you were playing the game during night time. 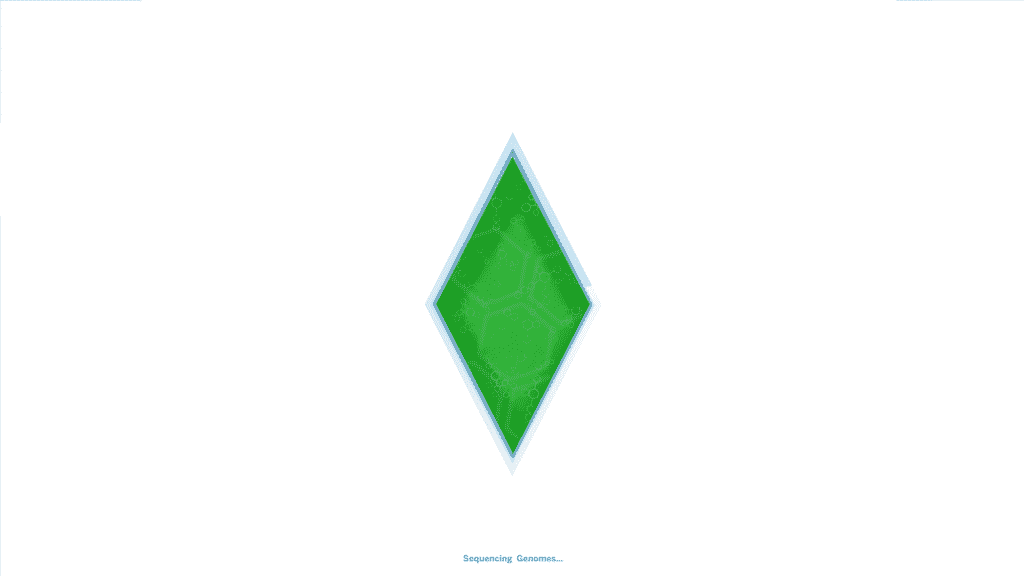 World maps were a bit of a mess because you couldn’t tell what a lot looks like until you hover over a certain neighborhood.

Once I started playing with my household I immediately noticed that there’s weird stuttering in the game. After The Sims 4 has launched the game had to go through several updates for it to be optimized for all computers. Until then, many simmers had to play the game that was mostly stuck in 30-40 fps with sudden drops here and there.

One thing that annoyed me the most are the in-game tutorials. Just when you think you got rid of the tutorial it pops up again for a different feature when you click on something. It literally took me about 15 to 20 minutes to get rid of it completely. I tried entering the, and I had to go offline because otherwise I wouldn’t be able to enter the game without updating it first.

Update: it turns out the command to bypass tutorials is actually –no_tutorial (with two dashes). However, you won’t be needing this because it’s easy to turn off tutorials in the current version.

The more I played the game the more I noticed how essential features were missing. The absence of pools, ghosts and genealogy really makes the game bareboned, not to mention that the game didn’t even come with dishwashers…

Build Mode was also missing some crucial things like basements, half-walls and useful tools like copy room or place the ability to move the entire lot around, not just the house structure.

During conversation you’d have to scroll through all Sims involved instead of having a full thumbnail list of sims involved: 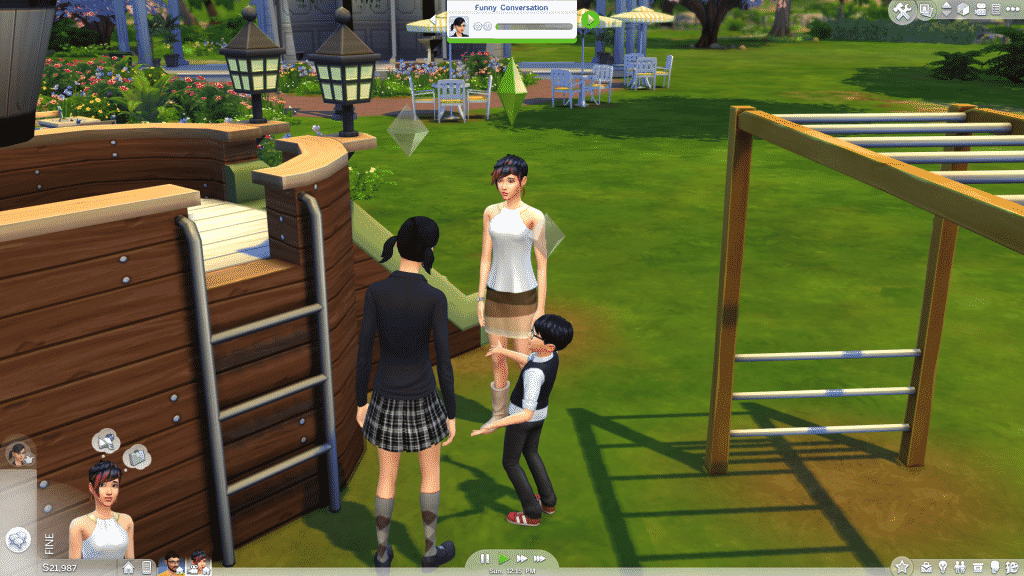 The phone on the current Sims 4 version luckily no longer looks like this: 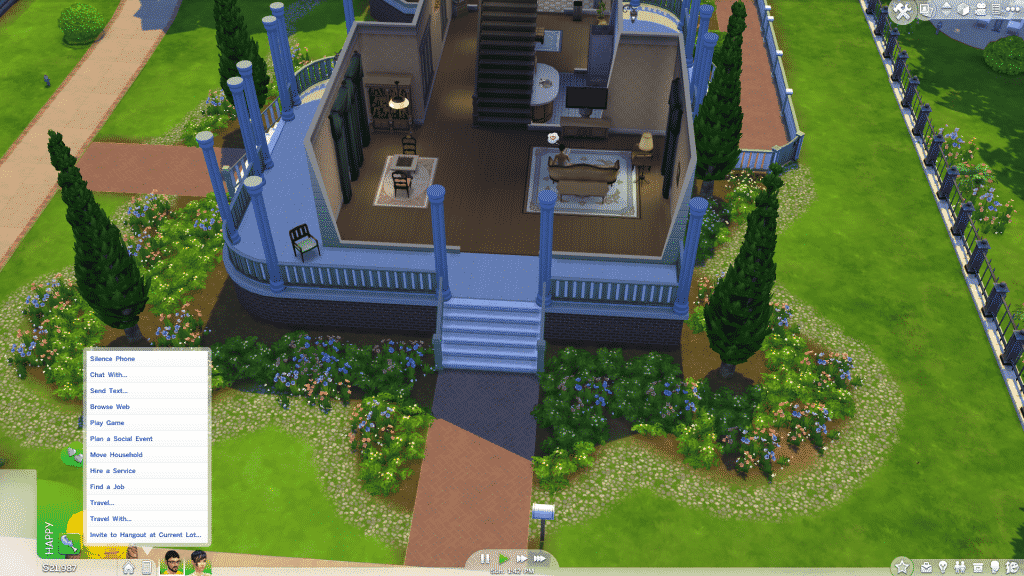 There’s an issue that was common in the month of September 2014 (before it was patched out) where Sims would just magically go missing. For example, the moment my baby Sim aged up to child (glad that’s no longer a thing) she was missing and I couldn’t find her or focus on her by right-clicking her thumbnail.

There was something about the user interface design that just didn’t look pleasing, and I’m not just talkinga bout the weird spacing between words… 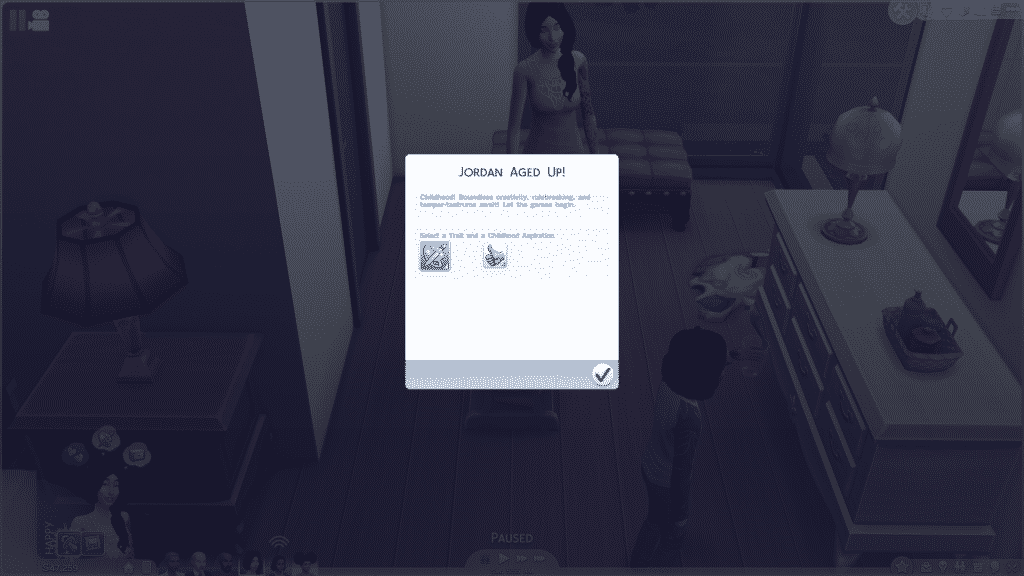 What really, really bugs me about this version is how Sims can’t stay in one place when socializing. If they have many surfaces to sit on around them while socializing they’ll move around like crazy. 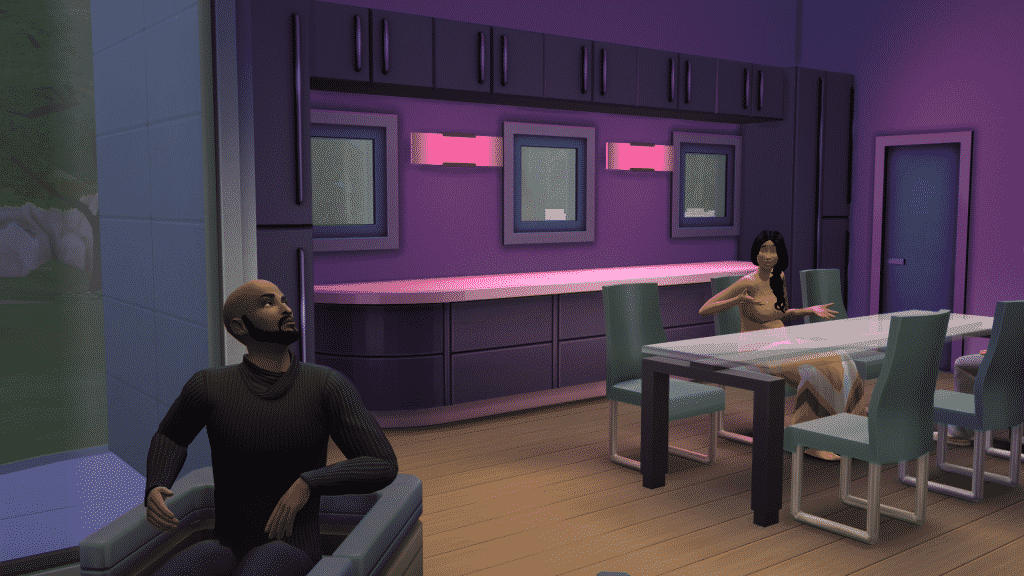 There are a lot more bugs that I encountered, such as my Sims getting stuck under the stairs or my Sim collecting dishes and stopping for no reason, scattering all the dishes they’ve collected around them.

There are a few things that I noticed that are missing in the current version of The Sims 4 and that were present back in the day:

You were able to take screenshots in game, turn those screenshots into memories and assign a certain emotion to each memory, so that when a Sim chooses the “Reminisce” interaction they’d get a moddlet appropriate with the emotion you’ve assigned to the memory.

UPDATE: I found out you can still do that in the current version, just not choose an emotion at your will. Check out our Emotional Memories article for more info! 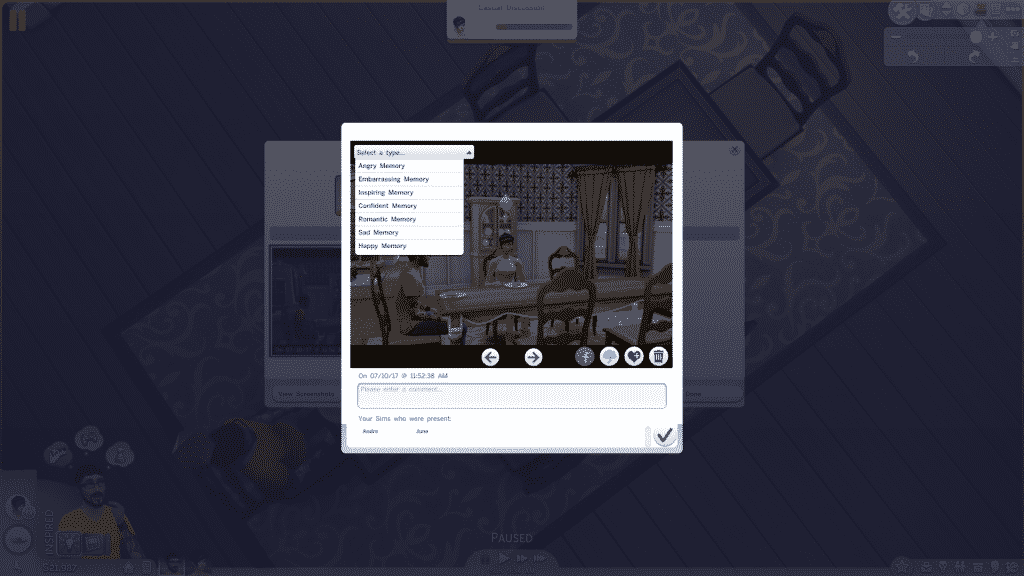 What really struck out in this version of The Sims 4 is the way that outdoor shadows are moving. They’re natural and are rendered about 1-2 times each second, unlike in the current version of The Sims 4 where they’re updated every 5 seconds. Seriously though, they became really choppy since around the end of 2015 and we still have no explanation why is that so.

Playing with this version of The Sims 4 really made me realize how far we’ve come in terms of base game content. The game went through a lot of needed cosmetic changes and the features we’ve gotten such as new life stage, pools, ghosts, new build tools and a lot more were really welcome. I’m not sure why they initally charged this game for 60$ when it didn’t have many features we have today.

Today, not only does the base game feel more complete but it’s also a lot more cheaper than before. If you’re planning to get The Sims 4 you can either get it HERE on Origin or subscribe to Origin Access and have it as a part of the Access Vault.