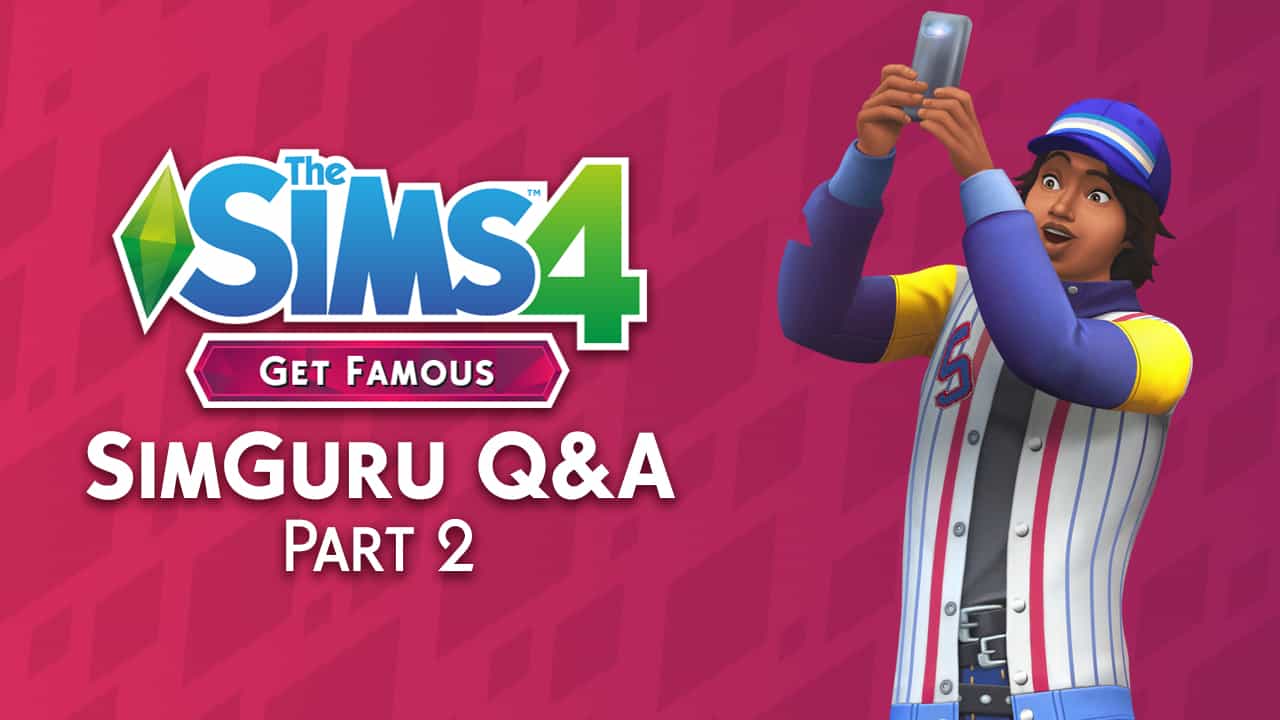 SimGurus have answered another batch of questions about The Sims 4 Get Famous Expansion Pack on Twitter!

We’ve compiled a list of all the relevant answers that SimGurus have provided down below. We’ll make sure to update the post with new informations and tweets by the gurus as they surface.

You can find the first part of the SimGuru Q&A HERE!

The lot traits can really help attract different types of celebrity Sims and to also create exclusive celebrity residential lots. So all the traits tie right back directly to Sims!

Music nowadays is all assembled in the studio. My shadowy friend here is into Media Production & has already produced a new track. She’s now in the process of mixing & matching different layers. (The audio of these tracks as you apply different sounds is frickin’ awesome BTW!) pic.twitter.com/OiycA1Joyi

Bump your new tracks on stereos in public to hype your brand even more. pic.twitter.com/AFRmYgMQDf

And this is just a slice of all the cool little things you can do with this object! Can’t wait to show you more in all of its glorious intricacies! Lots of combinatory goodness here. (We’ll def show it in a pre-launch livestream!)

Can you play your tracks on DJ tables? For sure! pic.twitter.com/7CDFs30ngW

This audio content on the Music Production Station is wholly owned by Maxis/EA. This means you can safely play this content on social media without fear of any copyright strikes or claims! 🎼

Well of course they can!
The drones and video station make this possible. 🙂 pic.twitter.com/bAUiwSXanh

It’s possible that the pond tool could return in the future. We didn’t have time to add it for this release, but we didn’t want to hold terrain tools back due to that.

You’re in luck – as you may have seen in some info from SimsCamp today, there’s an easy to use cheat to add or remove any Fame Quirk if you need precise control over shaping your celebrity Sim.

Just to clear up discussion around Fame Quirks in #TS4GetFamous… they aren’t randomly assigned. We wanted it to always feel like receiving a quirk made sense in the context of how your Sim was recently behaving.

The behavior of your Sim determines which Fame Quirk they receive. Although it’s tuned differently per quirk, generally speaking performing the trigger behavior multiple times within a certain window of time is what causes a quirk to get assigned.

There’s a variety of cheats that’ll be available for fame and celebrities. I’ll share them during our Fame & Reputation livestream on 11/2.

Yes; there’s the Starlight Accolades Awards, which is an event you can attend, and where you may even win a trophy. 🙂

Yes, you can create a club that only allows celebrities of various star levels of your choosing to attend.

Ah… you may not be aware then, that when leveling up your Media Production Skill, way more options open up even within those initially available songs. From your screenshot, you were only seeing a small subset of the stems of the song that can be toggled.

No, the music station puts you in the role of a music producer – selecting the various stems of a song to create a final track. It isn’t for actually recording the music.

It puts you in the role of a music producer, where you select from various stems within a song to create tracks that you can release and play back on stereos, or get yourself signed by a music label.

Only if you get caught. Reputation in Get Famous is based on the golden rule, and not subjective moral judgments.

Sorry no, that doesn’t include part time jobs.

Yes, you can change your agency by using your Sim’s phone. As you progress in the career, you’ll gain access to additional agencies.

Nope, fame is only for human Sims.

Taking a relaxing moment in Mirage Park before tomorrow’s livestream with @SimGuruRad pic.twitter.com/uNat7Jnadk

A personal drone live streaming to her fans.

Commercials, Day Time TV, Prime Time TV, and Movies are the categories. Commercials are the shortest, but will still take a full work day.

To answer your question. Your sims can go to auditions at the same time. They go to these solo.

They can also have their gigs at the same time. You would have to choose which sim you want to follow to work. The others would go solo because you are busy.

They may get mad if, when researching a romantic emotion, your sim chooses to flirt with everyone on the street.

Soon YOU will be able to recreate 2018’s Academy Award Winner for Best Picture in TS4! Or something like it… pic.twitter.com/9l6IEmn2wu