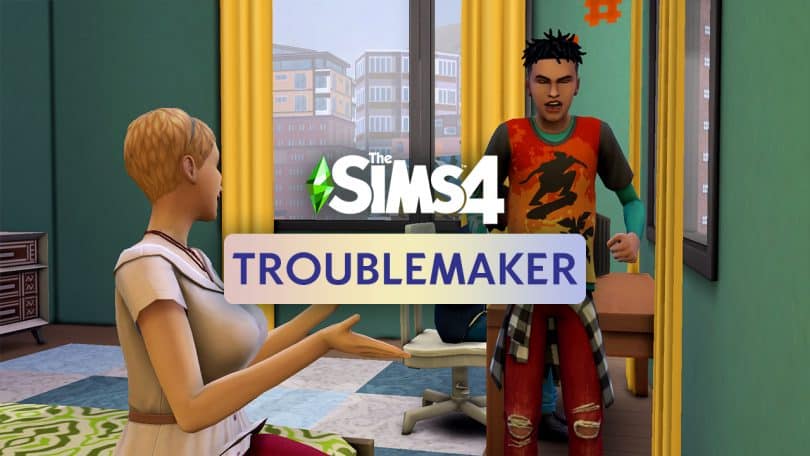 We tried to turn our troubled teen into a well-adjusted individual. Key word being “tried.”

Look what we have here. Another scenario playthrough! When there’s new scenarios, Sims Community is there to check them out with a playthrough! Today’s scenario? Troublemaker! This seemed like a really promising scenario and we were having a lot of fun with it… until it glitched out on us. Again. Yeah. We’re getting tired of this, too.

Anyway, here’s how our Troublemaker scenario went until we ran into trouble finishing it… 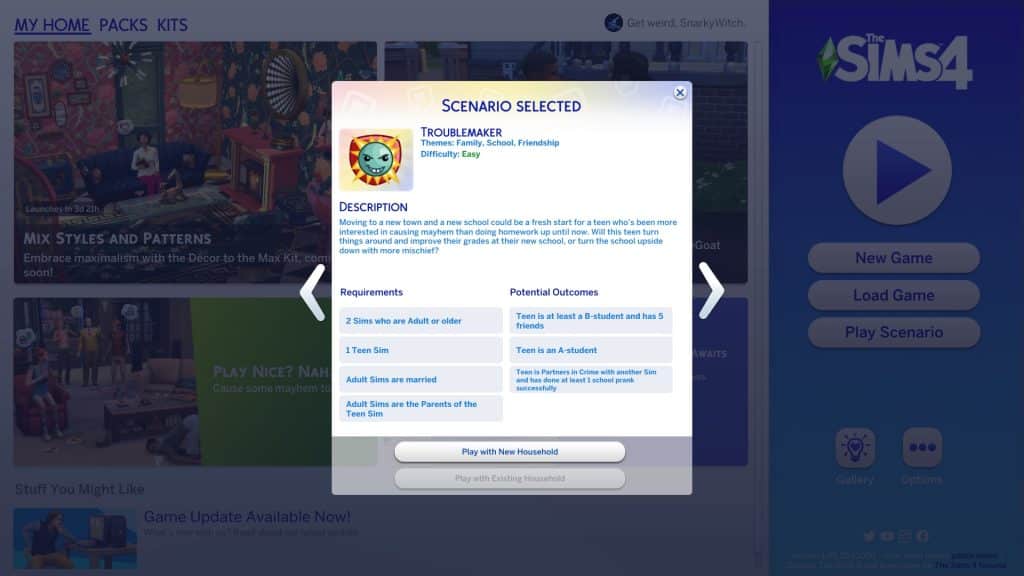 You’ll notice the scenarios have gotten a bit of a revamp. Along with lots more new scenarios, there are now difficulty ratings on each scenario to give you an idea of the time and effort it will take players to complete them. The Troublemaker scenario is listed as an Easy scenario. Well, it probably would have been if we’d been able to finish it but we’re getting ahead of ourselves.

The scenario description states that your teen Sim has recently moved to a new school after getting into too much trouble at their old school. Will this fresh start be an opportunity for them to turn things around or will they just get up to their old tricks again?  You need a household with two Adult Sims who are married to each other and a Teen Sim who is the child of the Adult Sims. There are three ways to complete the scenario. Your troublemaking teen can become an A student, become partners in crime with someone and pull off a successful school prank, or they can find a healthy balance between fun and success by becoming a B student with 5 friends. 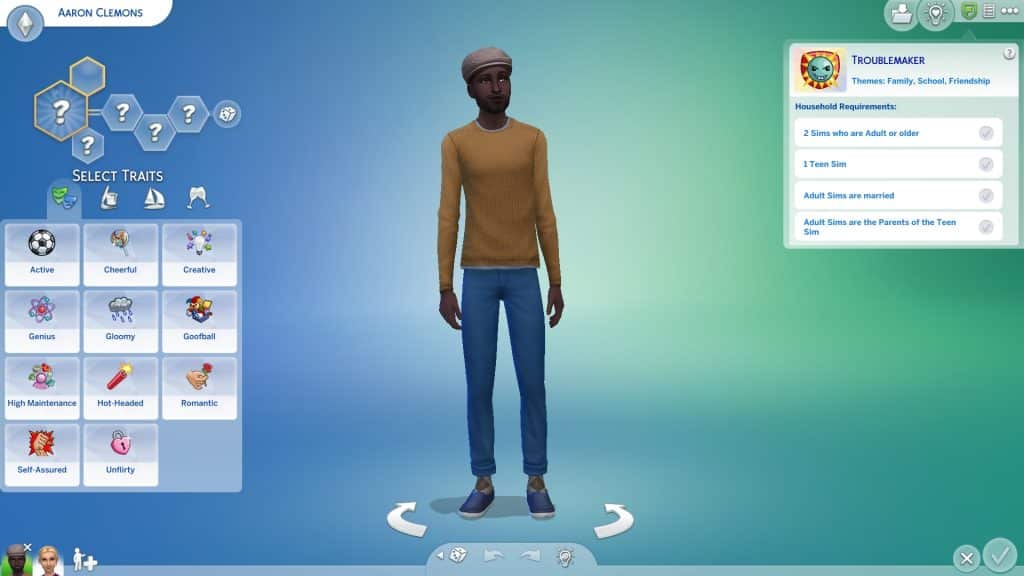 We randomised some Sims and spent a short amount of time customising them in CAS before moving them to the Arts District of San Myshuno. We thought the big city would be the perfect place for a teenager to get up to mischief.

Off To A Rocky Start 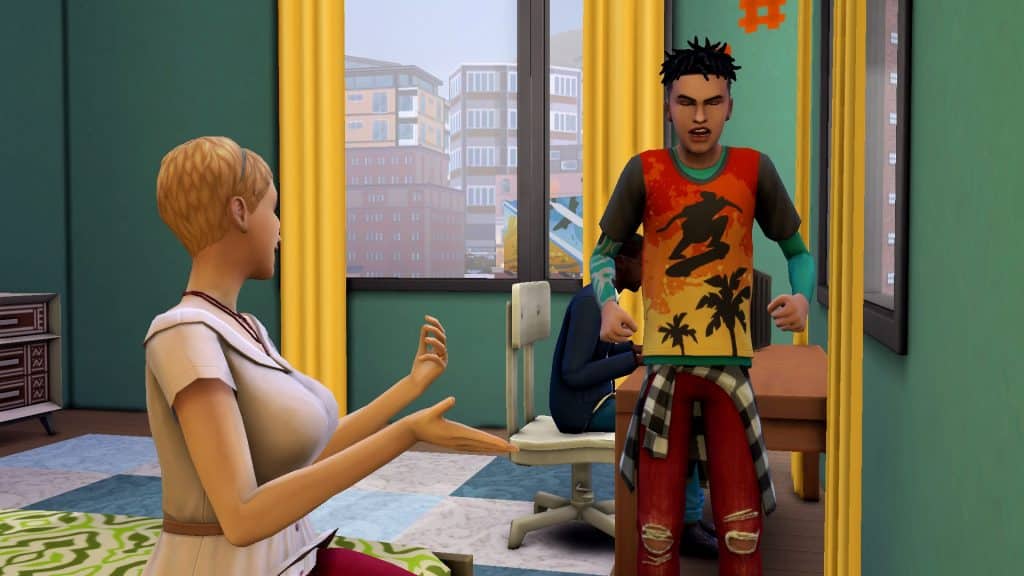 Right away when we started the scenario, both our teen’s parents were at level 4 of the writer career with some relevant skills. Our troubled teen, Shayne, started off as an F student with some Mischief skill. He also disliked both his parents and had the Festering Grudge sentiment towards both of them. Yikes! Looks like we had our work cut out for us! Even though it would have been entertaining to have our teen pull a prank at school with a partner in crime, we thought having to balance grades with friends would be a bigger challenge in terms of gameplay so we went that route. Or attempted to, anyway. 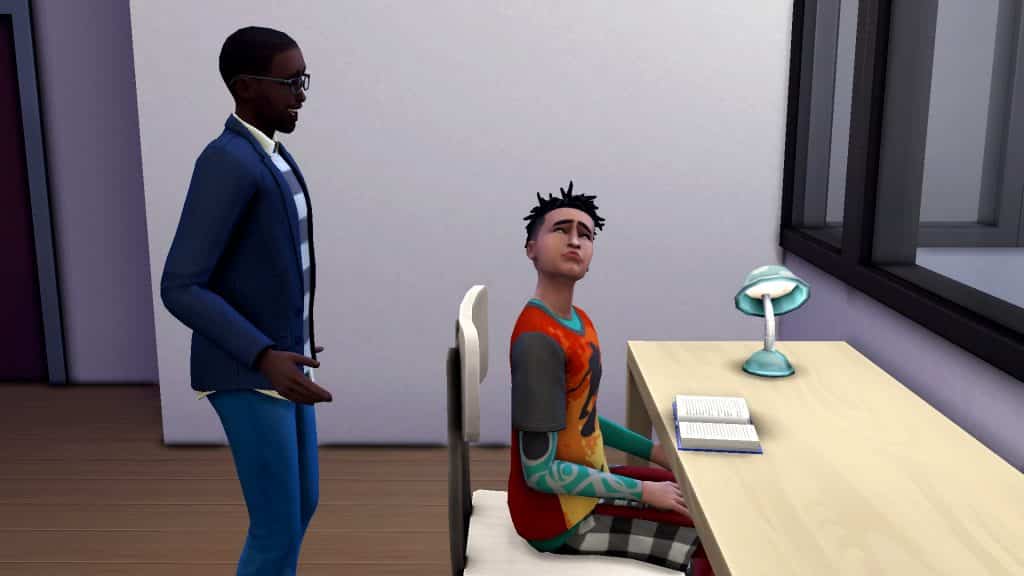 Shayne had a rough start trying to get his life back on track. He was often too tense to do homework due to his parents always being around. Whenever they tried to help or encourage him, it just made things worse. He could only do his homework after his parents went to bed which meant he had to stay up late every night to get it all done. That meant he’d wake up tired for school with no energy left in the evenings to do his homework. 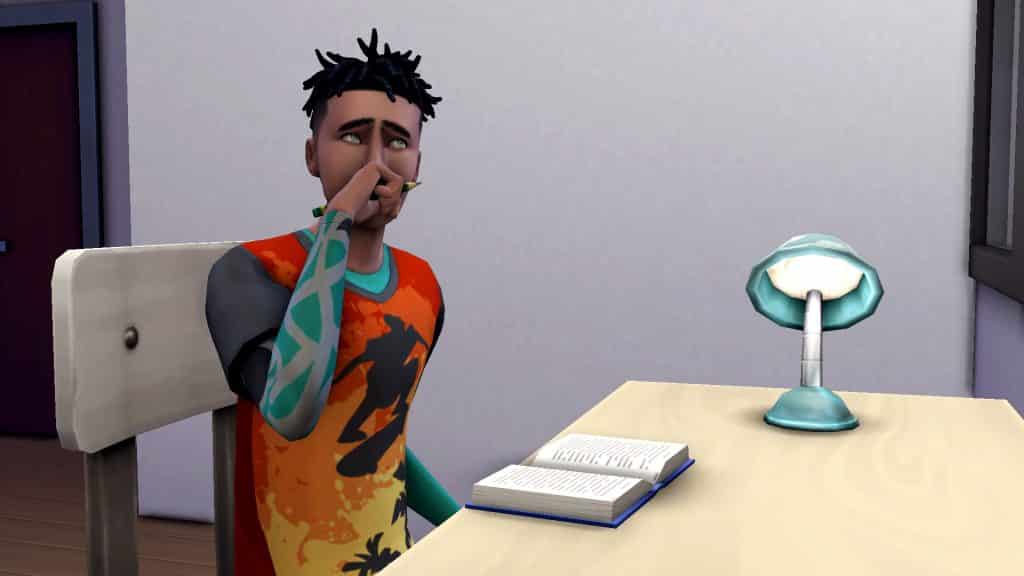 To make matters worse, he was having horrible luck at school. Nothing he chose in the chance card pop ups seemed to be the right option and he’d be punished with detention and lose all the school performance he’d worked so hard to raise back up. This scenario was turning out to be more challenging than the Easy rating it was given in the main menu. 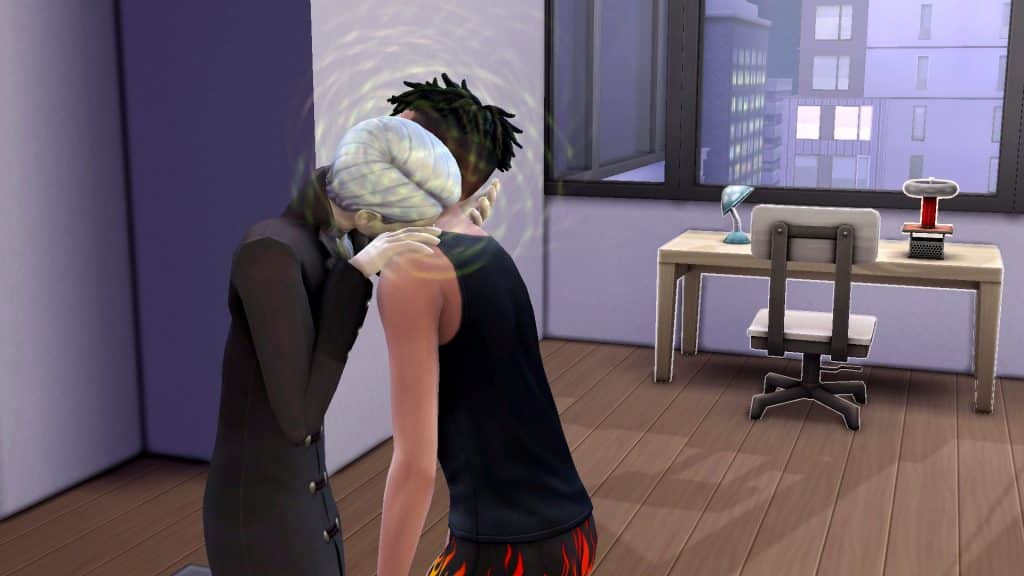 Oh and he was attacked in his sleep by a vampire. So there’s that. 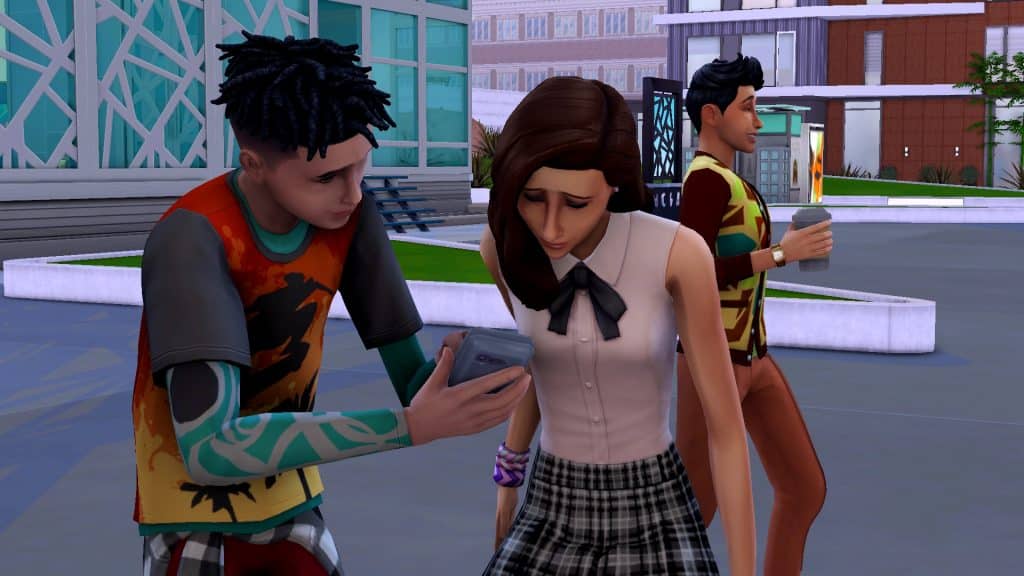 But just when we were about to give up on a redemption arc and just have Shayne become a professional class clown, he met some friends his own age around the city! Namely, Luna Villareal and Cassandra Goth! Both good students from prestigious, wealthy families. Maybe Shayne’s new friends would be a good influence on him and encourage him to stick with his efforts after all. 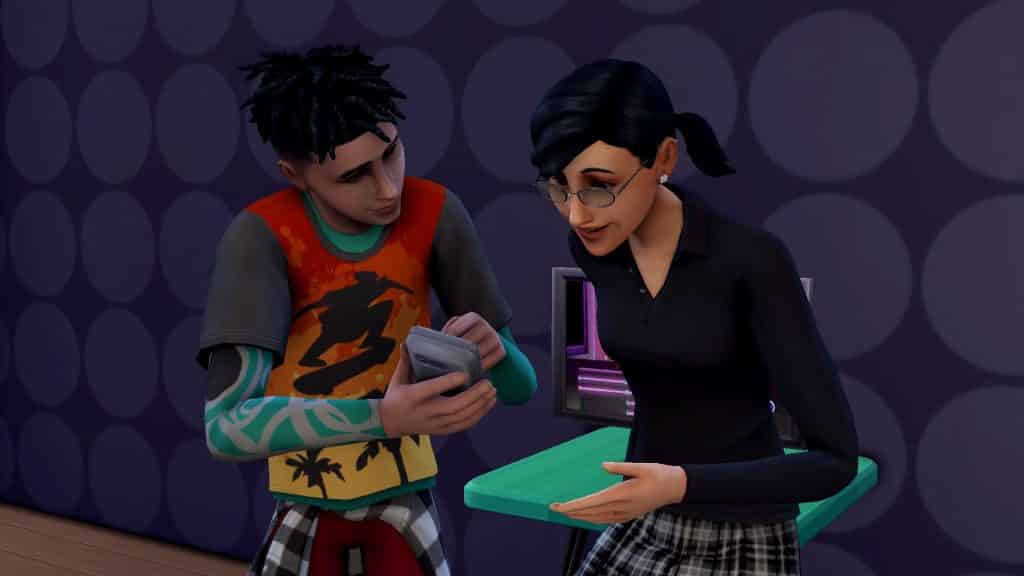 The girls started coming over to his apartment to help him with school projects. Having people around that he actually liked and had positive sentiments with really lifted Shayne’s mood! Because he wasn’t so tense all the time, he was able to get his homework done earlier which meant he had more time to sleep at night. He could go to school well-rested and have enough energy to work on homework and projects after school with Luna and Cassandra. It wasn’t long before Kyoshi Ito, another wealthy and well-rounded teenager, joined their little clique, too.

Word must have spread around school about Shayne’s new reputation he was building for himself because the Paragons reached out to him to offer him a place in their club! We’re sure Luna probably had something to do with this, seeing as she’s also in the Paragons. Shayne figured joining such an elite club would be good for the new image he was trying to create for himself and accepted the offer. He went from being the bad boy in school to hanging out with all the preppy kids he used to make fun of, all because he happened to say hi to a girl named Luna one day. Life was funny, wasn’t it? 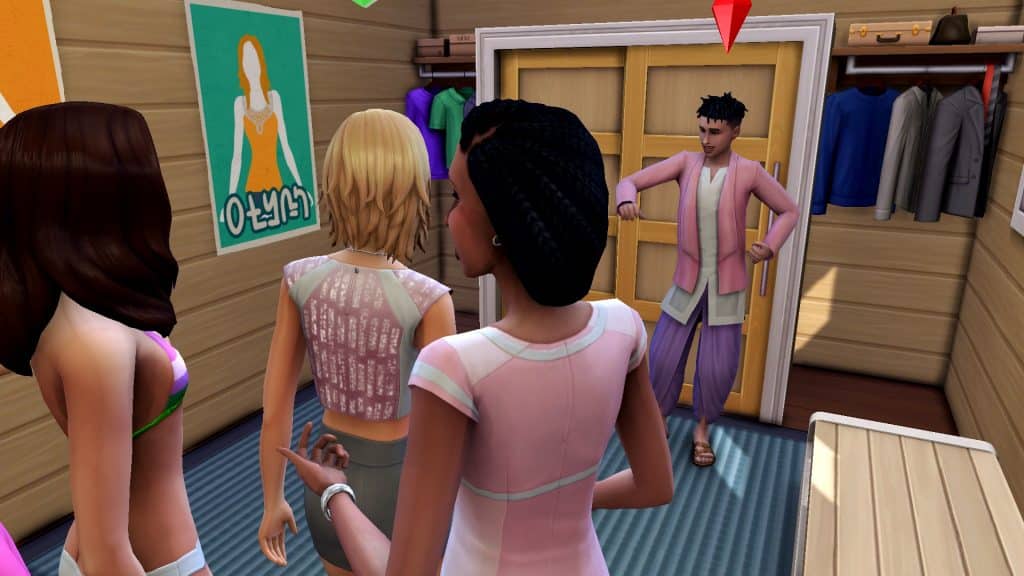 It wasn’t hard for him to fit in with his new group of friends. All the Paragons did was hang out at the public pool, drinking coffee, trying on clothes, and picking fights with the Renegades. Y’know, the type of people Shayne used to hang out with back at his old school. Ironically, swimming was not one of their club activities even though their club hangout was at a pool. Swimming is like, sooo pedestrian. 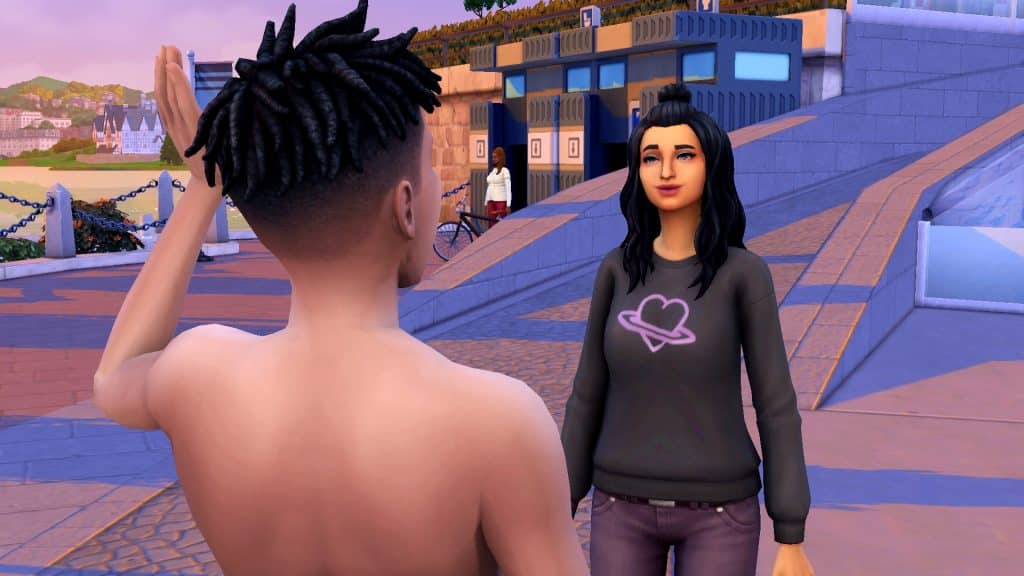 It turned out that the Paragons had another well-off teenager in it named Sofia Bjergsen and Shayne ended up making friends with another girl named Greta Laurent. By the weekend, Shayne had managed to hoist himself up from an F to a C in school and he had four friends; Luna, Cassandra, Kyoshi, and Greta. All he needed to do was go up one more grade level and get to know Sofia more and we’d have a finished scenario! 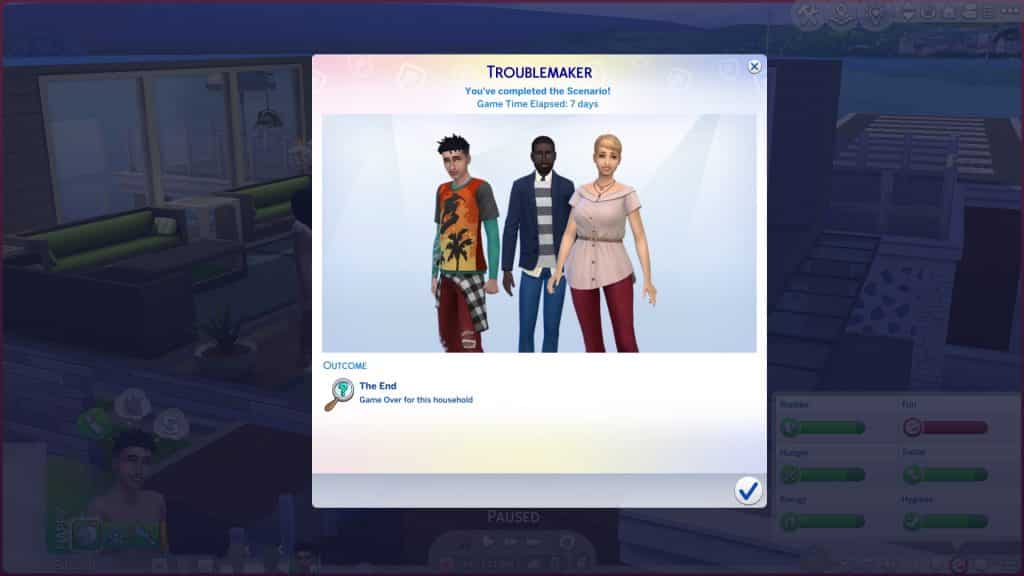 Or… not?! When we went to Manage Worlds to place down a fun hangout spot for our group of teenagers, we were greeted with this depressing popup when we returned to Shayne’s household.

Game over?! What do you mean, Game Over?! We were SO close to finishing what was (up until now) a really fun scenario we were getting invested in! What the heck happened?! Weren’t these scenarios supposed to have been cleaned up and fixed so this kind of stuff didn’t keep happening? Guess not…

Well there’s not much to say here, is there? We would have recommended this scenario to players if we’d been able to finish it. Until we got a Game Over for absolutely no good reason, we were having a lot of fun and were becoming very invested in Shayne’s story.
But we couldn’t finish it so we can’t recommend this one. Pass.