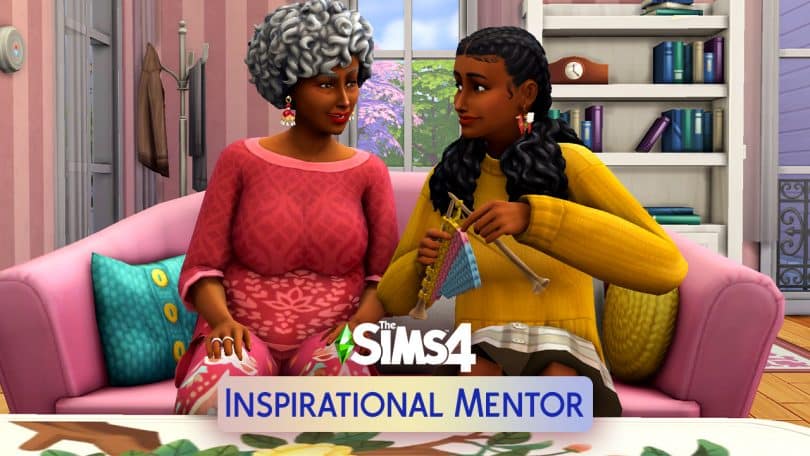 Pass on the knowledge to younger generations in the latest Limited Scenario!

The recent SDX drop graced us with a new scenario! This one is a limited time scenario called Inspirational Mentor! This scenario is about passing knowledge on to the next generation. It’s perfect for Women’s History Month because for this scenario, both your Sims will identify as female. 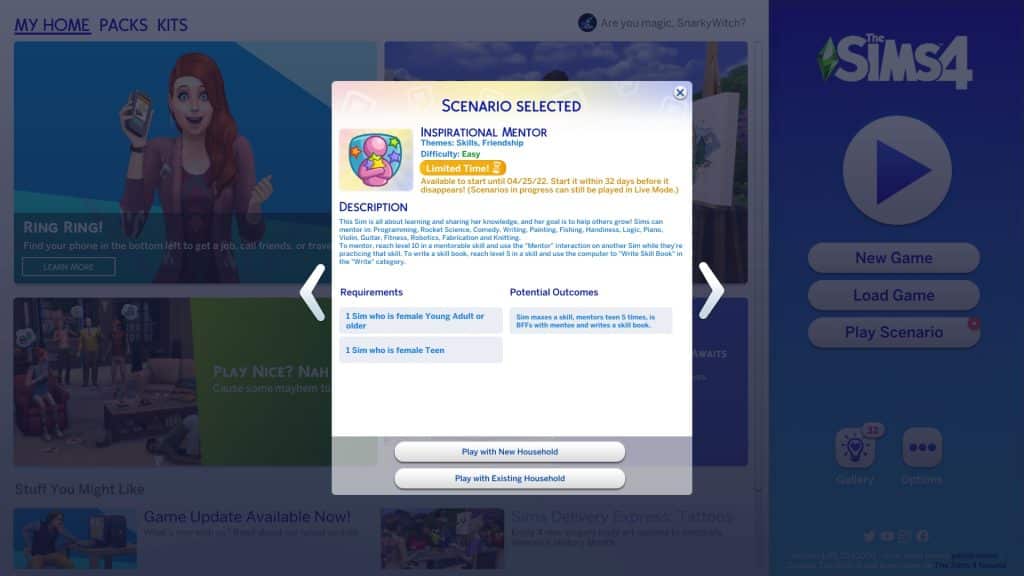 You’ll notice the scenarios have gotten a bit of a revamp. Along with lots more new scenarios, there are now difficulty ratings on each scenario to give you an idea of the time and effort it will take players to complete them. The Inspirational Mentor scenario is listed as an Easy scenario.

This is a limited time scenario so if you want to play this scenario, you’ll have to start it before April 25, 2022. Scenarios in progress can still be played after the deadline as long as the player has begun the scenario before the deadline.

You need a household with one Young Adult or older female Sim and a Teen female Sim. There is only one way to complete the scenario but you’ll have to complete several tasks to finish it. Your older Sim will need to master any of the following skills: Programming, Rocket Science, Comedy, Writing, Painting, Fishing, Handiness, Logic, Piano, Violin, Guitar, Fitness, Robotics, Fabrication, or Knitting. Your older Sim will then need to mentor your teen Sim in that skill five times, become BFFs with them, and write a skill book. 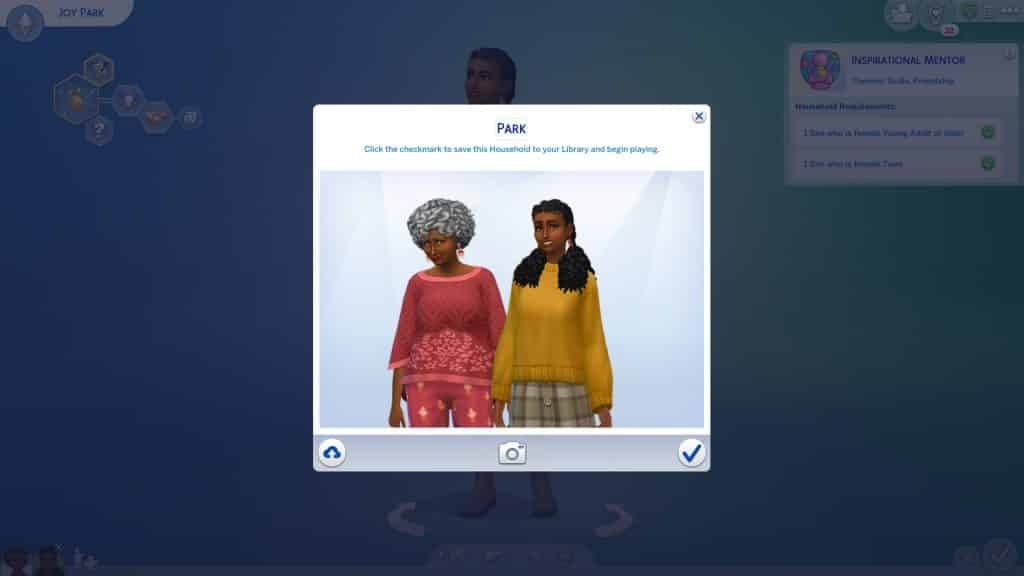 We thought it would be heartwarming if we made a grandmother and granddaughter duo where the grandmother passes on her knitting skill. Knitting can also be maxed out in a day or two just by knitting in a rocking chair while Inspired and listening to music so it’s a good skill to pick if you want to speed run this scenario. 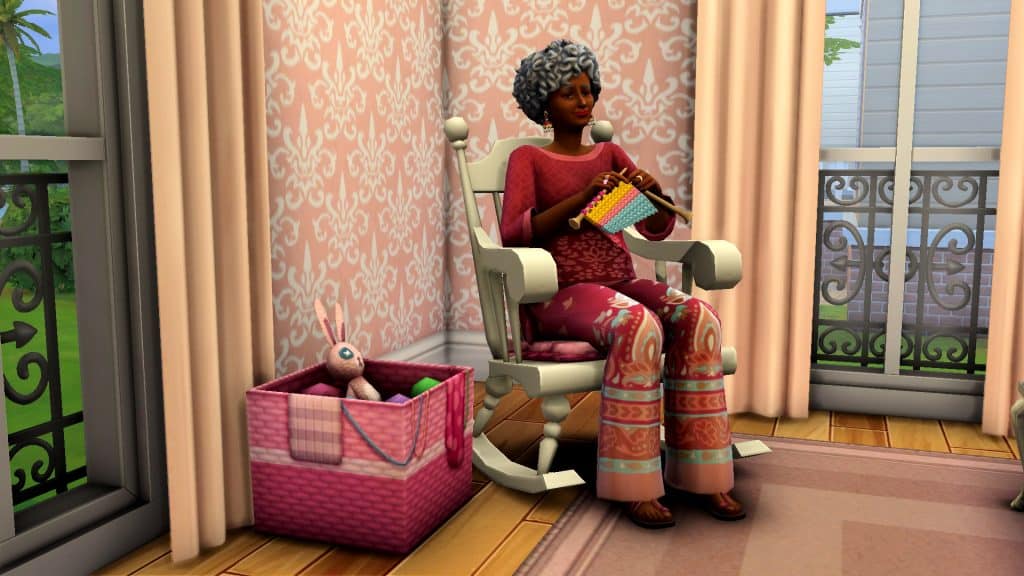 We got our grandmother, Rosalie, and her granddaughter, Joy, all set up in Willow Creek. Rosalie started out with level 2 in all eligible skills for this scenario. Since we were starting almost from scratch, we got Rosalie knitting in her rocking char right away with some music to help boost her skill gain and a plumbob lamp to keep her Inspired. There wasn’t much to do with Joy in the meantime so we kept her busy with homework and had her start knitting a few things so she’d have enough skills for school. 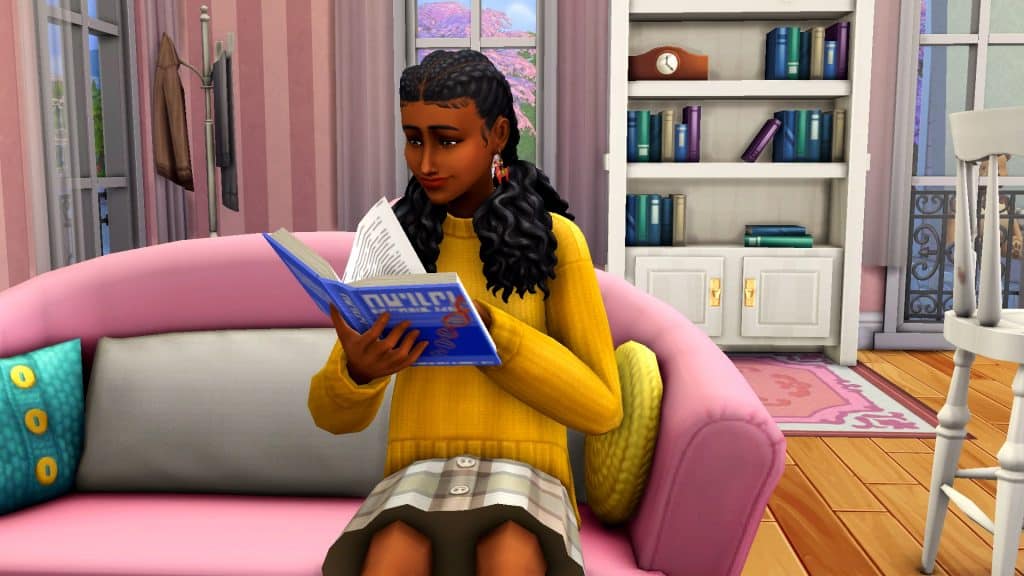 Since we weren’t using any cheats in this playthrough apart from getting Rosalie and Joy set up in a decent house, Rosalie did have to stop knitting periodically to take care of her needs. Even though she was making very fast progress in the Knitting skill, we still felt like things were a little slow at first, just because most of the scenario is reliant on maxing a skill first. Other goals were on standby until Rosalie mastered Knitting. 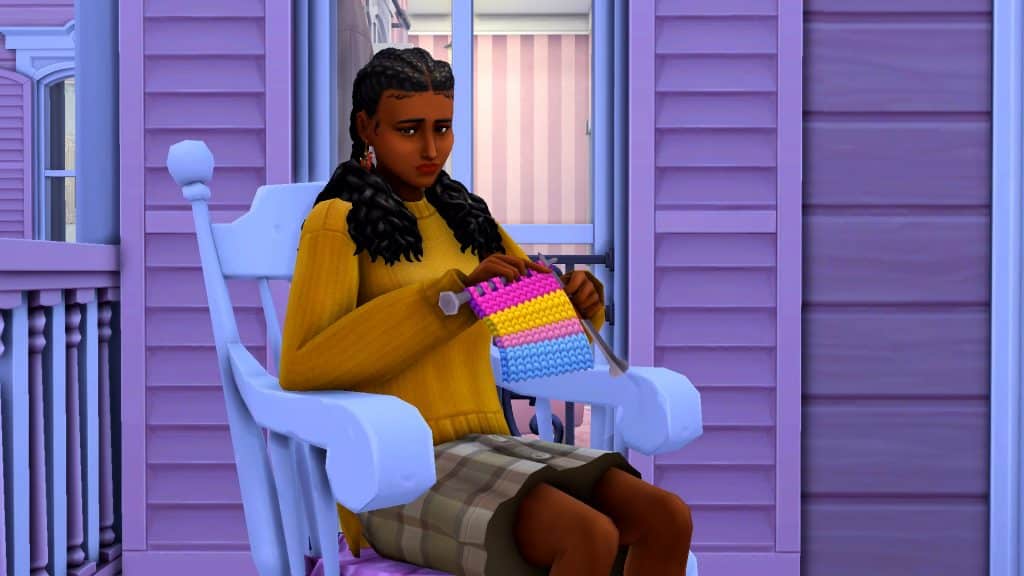 Luckily, we picked a fast skill to learn and Rosalie had her Knitting skill maxed out by 6pm on Day 2 of our scenario. She was too tired and hungry to start mentoring Joy, though, so we decided to just call it a night and let grandma and granddaughter look after their needs and go to bed. 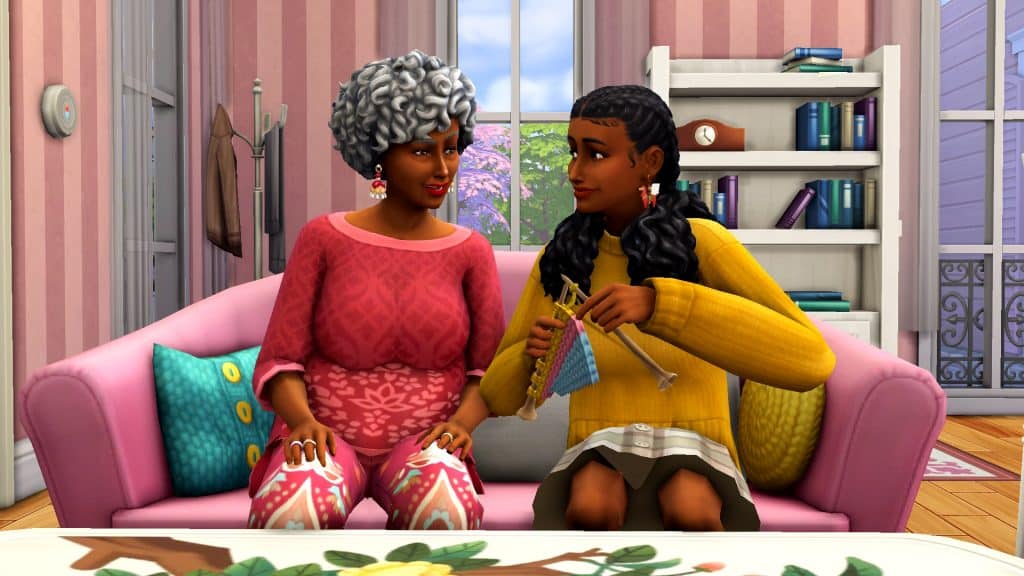 The next morning was a school day but we didn’t want to sit around twiddling our thumbs while Joy was at school, so we had her take a vacation day. We wanted to buckle down and focus on the rest of the scenario goals today. So Rosalie got to work teaching her granddaughter everything she knew about knitting. We spammed this interaction by having Rosalie mentor Joy just long enough for it to register on the goal tracker, canceling the action, and then having her immediately start mentoring again. If you’re also using the Knitting skill for this scenario, it’s worth mentioning that the Teach to Knit action does not satisfy this goal. You have to click on the teen while they’re knitting and select Mentor. 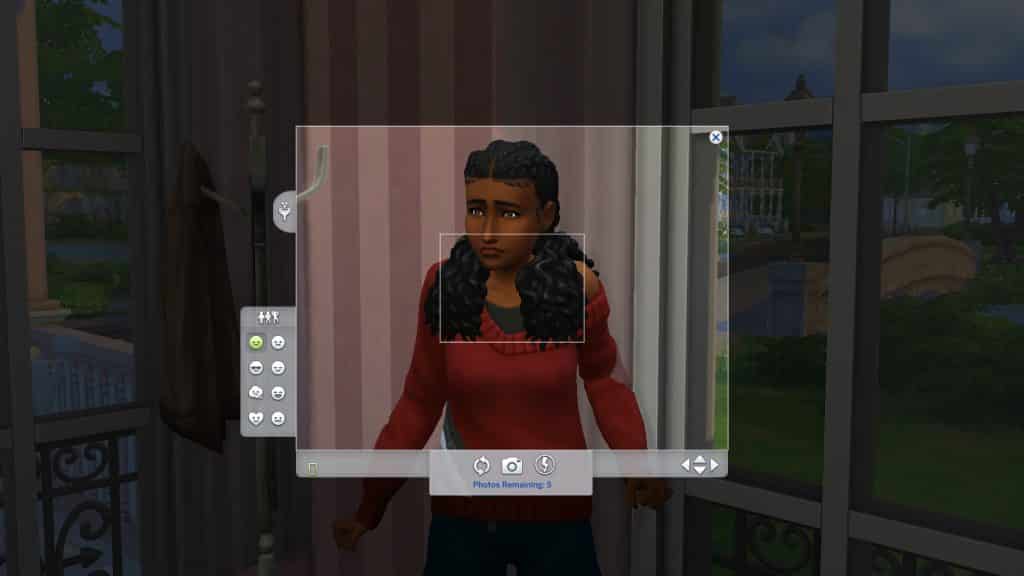 The next item on the list was becoming BFFs. Ordinarily, this would take a lot of time and we didn’t feel like tediously stacking up dozens of Friendly socials for hours. We know of a faster way to max out friendship! Yes, it’s time to exploit the camera loophole. If you don’t already know, taking a picture of a Sim immediately makes them good friends even if they started out as strangers. It’s a hilariously easy way to make instant friends. We had our proud grandma take a picture of her granddaughter, who didn’t look too enthused about having to pose for a picture for grandma. It did the trick, anyway. Taking Joy’s picture immediately maxed out their friendship. Then all they had to do was Become BFFs! 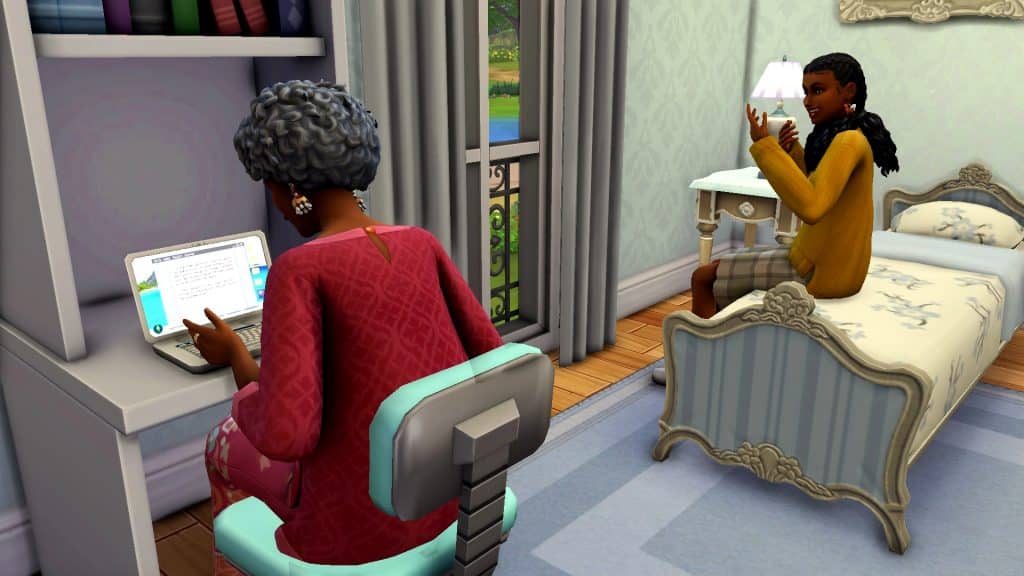 There was only one thing left to do to complete the scenario. Write a Knitting skill book! Joy was kind enough to lend her laptop to her grandma so she could share all of her sacred Knitting knowledge with the world. Rosalie looked like she was having trouble figuring out how to work this gosh darn, new-fangled, fancy-shmancy contraption but Joy helped her figure things out. 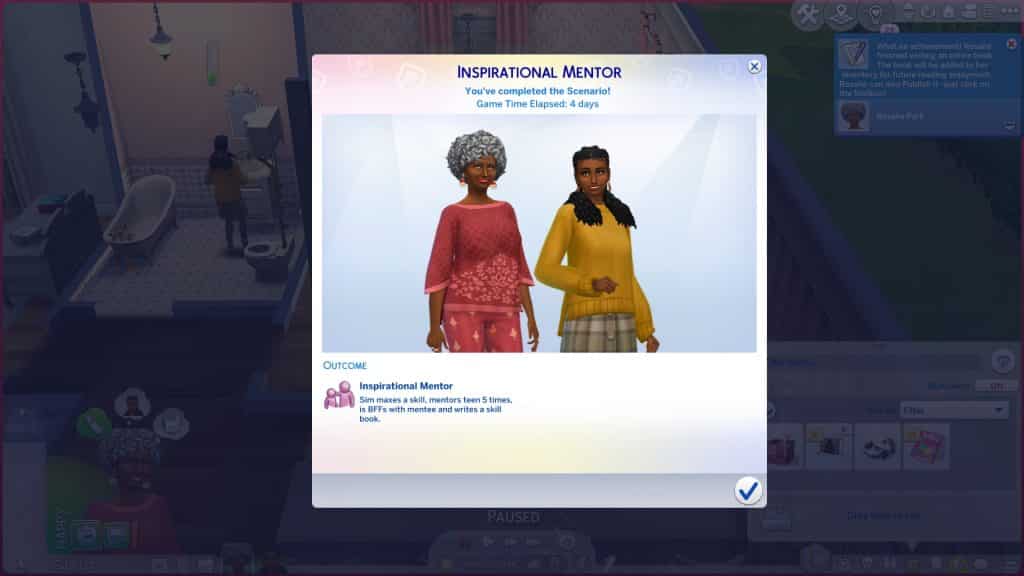 In a few hours, Rosalie was finished her skill book and we were finished with this scenario which took us a total of 4 days.

This scenario has a slow start but it’s not a bad little scenario to start a new household with. It’s challenging enough to keep your attention but not so hard that you’re going to spend forever on it. It’s a nice way to start playing a new household and earn a big chunk of satisfaction points without too much hassle. We also liked that there was a wide variety of skills you can choose to focus on. This helps make the scenario feel more like your own. And of course, major points for a scenario that celebrates Women’s History Month!

We didn’t run into any bugs with this scenario but we also didn’t leave our home lot during this playthrough so… travel at your own risk.