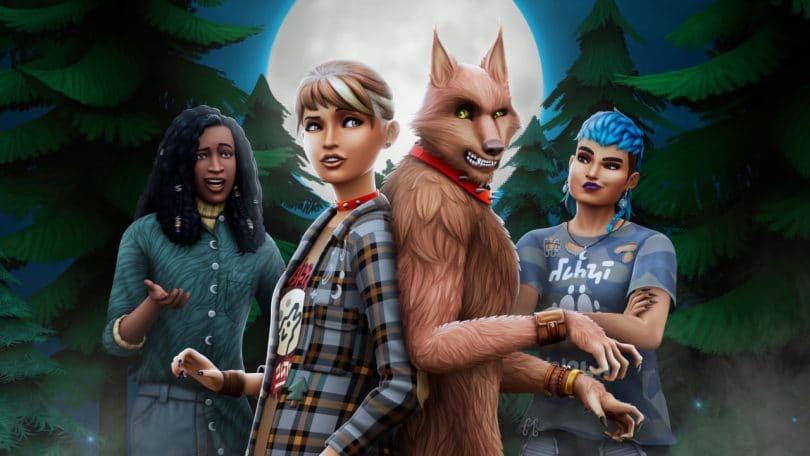 The preview of The Sims 4 Werewolves has leaked!

The first preview appeared on the website today. Usually during the Roadmap season The Sims Team teases the upcoming Packs and Kits through question marks. It seems like something slipped today, and the cover Art for The Sims 4 Werewolves – which is also the official name according to the website data.

The cover art features a Werewolf and a Sim side by side, accompanied by two other Sims in the background. All of the Sims are rocking new hairstyles, fur and even the entire new Werewolf form!

Actually, scratch the first paragraph regarding the Werewolf and the Sim standing side by side. It seems like the Sim on the left is the human form of the Werewolf on the right…

In the background there’s an eerie preview of the new Moon as well, with a forest Background. Check it out below:

It was revealed in the first round of teasers that the upcoming Game Pack will have a new World called Moonwood Mill, among other things. The second round of teasers had plenty of interesting information and lore regarding the beef between Vampires and Werewolves. You can catch up on all the teasers here!

We have a small Community Poll regarding the leak. Let us know what you think of the current Boxart Preview of the Werewolf form!

Are you excited for The Sims 4 Werewolves? Stay tuned on our website for all of the latest updates on the upcoming Game Pack!