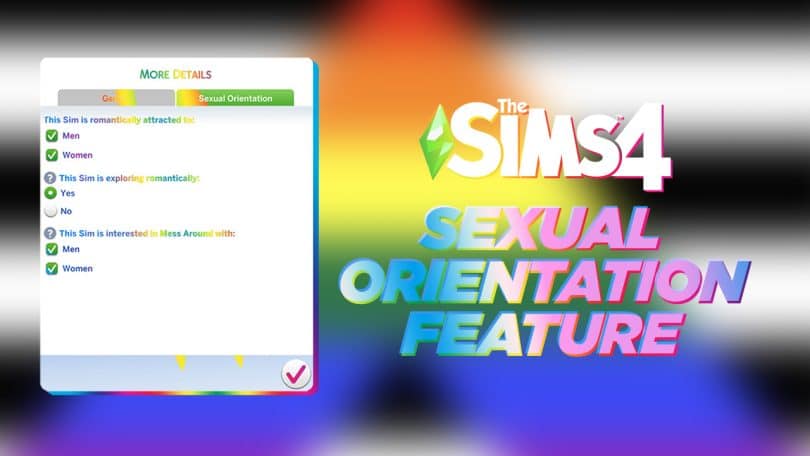 A Look into one of the most important Updates in The Sims Franchise!

The Sims has always been known for its ways of allowing people to be themselves and create characters without boundaries. Boundaries of love, passion and gender.

In fact, The Sims has been considered to be “Bisexual” since The Sims 1. The game allowed players to love characters of both same sex and different sex. The legacy continued in The Sims 2 and The Sims 3, and The Sims 4. Until 2016 when The Sims Team released the CAS Gender Preferences Update.

This has allowed players to Customize their Gender through Masculine and Feminine Frames and Fashion Preference, as well as Toilet Options.

After this, The Sims 4 has always been considered to be Pansexual by Default. The Sims 4 also in May received an important addition of Pronouns, which will be further released for other languages in the near future.

The Latest Update is finally stopping the streak of Gay Propaganda and pandering to Rainbow Capitalism. Well, actually next week when The Sims 4 Base Game Update comes out.

Next week is when you’ll finally be able to create – STRAIGHT PEOPLE in The Sims!

That’s right – Straight People are finally getting the much deserved representation that has been undertaken by the constant Gay Propaganda that The Sims Team has been throwing out left and right. We want Cars, Spiral Stairs and Flying Dragons first. Who cares about representation and useful features for everyone, right? 🙄

The new features in The Sims 4 Create A Sim allow for players to choose the pre-determined Sexuality of the characters they create.

The Genders Section of Create A Sim now has More Details, which seperates the categories now to Gender and Sexual Orientation.

All images courtesy of The English Simmer! Thank you ❤️

There are different categories, such as:

This Sim is romantically attracted to

In this Category you are able to select Men and Women. The User Interface has both options made as Check Boxes, allowing you to select:

This Sim is Exploring Romantically

Selecting “no” will prompt this sim to reject other Sims that do not meet their attraction type.

This feature has a Yes and No toggle.

This Sim is interested in Mess Around / WooHoo with

This section has Men and Women as toggles, allowing you to select:

In Live Mode, the User Interface has been updated with additional information in the Sim Info Panel. As you meet other Sims, you’ll be able to learn their Sexual Orientation through questions.

Sims will also unlock bigger Romance Interactions that allow them to follow their Natural Sexuality.

Information about Sexual Orientation is displayed in the Sim Info Panel on the top, letting you know with who the selected Sim prefers to have Romance and Mess Around / WooHoo interactions:

Asking Sims about their Preferences is also a thing!

You can Ask other Sims about their Romance Preference, as well as Mess Around / WooHoo Preference. You’ll discover information such as “I am attracted to Men” in the notifications. Eew, am I right?

This has been confirmed to be the first iteration of the Sexual Orientation Feature Update for The Sims 4. Meaning that we can expect more improvements in the future for the game!

Congratulations to Straight People by the way – very happy that they have been finally recognized!

So happy for our reader as well! Hope I was able to deliver some straight excitement!

The Free Update for The Sims 4 Base Game is expected to release on July 26th, 2022. We’ll keep you posted on Sims Community with Patch Notes, The Countdown, Live Updates and more. Stay tuned!