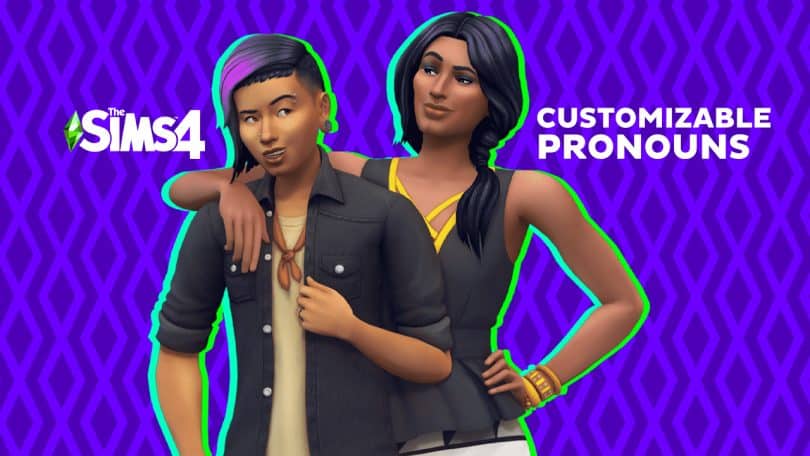 Full Guide to the Customizable Pronouns Feature for The Sims 4

The long-awaited pronoun update is finally here! For the English language version of The Sims 4, anyway.

The Sims Team has been sharing their progress on adding pronouns to the game for quite some time now and today, they’ve released an update for the English language version of the game adding customised pronouns to CAS. The update is now live on both PC/Mac and consoles.

Unfortunately, this update only pertains to English copies of the game currently. The Sims Team has expressed challenges with handling custom pronouns in different languages, which all treat pronouns very differently. We hope to see this update rolled out in every language soon but for now, English is the only language that supports the pronoun changes.

Here’s everything you need to know about using the new pronoun system!

When you enter CAS, clicking on the name fields opens up another option for pronouns next to it. Players can choose their Sim’s pronouns from a drop-down list in this menu. By default, She/Her, He/Him, and They/Them are already listed as options but if your Sim uses pronouns that aren’t listed here, there is a Custom Pronouns option.

If you choose to give your Sim custom pronouns, a popup screen will appear allowing you to enter the custom pronouns of your choice into the fields. For each field, there is a sample sentence below it so you can see how your choices will look written out in the game. The pronouns in the sentence change to reflect what you’ve entered into that field.

Once you’ve confirmed your choice of pronouns for your Sim, they will be reflected next to their name in parentheses.

You are not required to specify pronouns through this menu. You can ignore it and the game will select the pronouns that match your Sim’s gender identity by default. The pronoun feature is an optional CAS feature for players who would like more customised control over the pronouns their Sims use.

Since Sims speak in a fictional language called Simlish, your customised pronouns will primarily only show up in game notifications, such as skill notifications, phone calls, and other things of that nature.

We created a household with a range of pronouns. One masculine Sim did not have any pronouns set at all. The other Sims ranged between She/Her, He/Him, and They/Them as their set pronouns.

Apart from written notifications, pronouns do not play a role in gameplay. We think it would be a nice addition to the game if an Ask About Pronouns social was added in the Friendly category, which would then reflect their pronouns in the Sim Info panel.

We hope The Sims Team plans to continue expanding on this important feature for representation and bring it to all languages, as well as listen to feedback from players about ways pronouns can be further integrated into the game that makes everyone feel seen and included.