BEHIND THE SCENES: CURRENT HOUSEHOLD

Hello Simmers! Today I am here for the start of a very unique series of articles here at The Sims Community. It will give you an insight into what its like for me as not only an author here at The Sims Community but a YouTuber and avid sims player! When I am not recording lets play parts or reviewing the latest releases I do like to try and find the time to work on my own game play. Current Household videos are something I upload every now and then to showcase how I play outside of recording and in today’s introductory post I will be going more in depth into my current off-screen family! 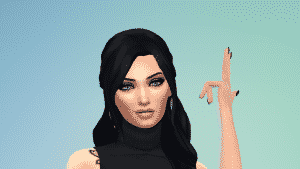 Aoife Pierce: is how it all began! My very first sim in the household living alone in her studio flat hidden away in Windenburg. Aoife is a young adult sim from a big family. Shes started out as a medical intern just as the family members before her had done. She has since worked her way up to Medical Technologist at Cut-N-Gut Health taking after her father who was a world class surgeon. Her aspiration is to have a successful lineage, something her own parents instilled into her from birth. Academic success in the medical field was a must and she didn’t really have much say in the matter. Consequently she would like the same for her own family, not necessarily in medicine though. Aoife is a cheerful, self-assured, domestic perfectionist with a love for writing. She loves to put her stories, experiences and feelings on paper and publish them to the world to read. She has written two successful books titled ‘Love, Her xoxo‘ and ‘Sweet Treats’ . 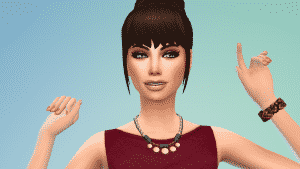 Wrenn Sears: Aoife’s girlfriend! The two met during a singles night at the Rattlesnake Juice and have been inseparable ever since! Wrenn was living in a tiny bedsit in Oasis Springs as she got her career as a detective at the police station off the ground. After a few months getting to know each other the pair put their savings together to buy a family home in Willow Creek. Although barely scraping together simoleons for the bills each week the two are thriving in their new abode! Wrenn is a very creative sim, like Aoife she likes to express herself. She enjoys looking out from the balcony and painting from her pink easel and earns a bit of money on the side selling her least favourite pieces to the local gallery. Wrenn aspires to have a big happy family, being an only child growing up she wants something different for her future, A big house full of lots of children and family. 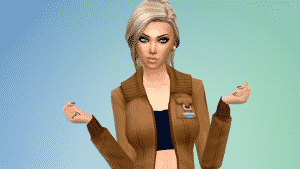 Krysta Xias: A lesson in not judging a book by its cover, Krysta is an alien who was dumped on Earth after being overthrown as queen in Planet Sixam. Her disguise is that of a confident, self assured hot-headed mean girl with a sting in her tail… but her looks couldn’t be more deceiving. As queen Krysta had to be confident in herself, however she still remains insecure at times, especially in the human world. She saw her fellows at Sixam as her family, she nurtured and supported them all until her jealous younger sister disposed of her on Earth and took the thrown faking Krysta’s death. Aoife found Krysta lost and alone wondering around the Creek and decided to bring her home before the scientists caught sight of her. Wrenn wasn’t impressed but agreed to let her stay as long as she remains in disguise at all times. New to the sim environment Krysta loves to explore and collect new things. Breeding frogs, finding crystals and gardening are among her most favourite sim activities to take part in. Obviously she doesn’t work just yet as she can’t quite comprehend social conventions which has already got her in a spot of bother (not in her mind though) 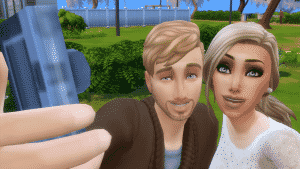 Krysta, while strolling around Windenburg stumbled upon Mr. Harvey. Completely unknowing to her Harvey was actually a scientist studying extraterrestrial life forms. He knew immediately that she was an alien, but said nothing through fear of startling her. At first, it was all about acquiring her DNA. This way Harvey could make the ultimate breakthrough and become a world renown scientist in his field. But Krysta had a charm, she quite liked Harvey and may or may not have used her alien abilities to brainwash him into returning those feelings. The couple were smitten, but Krysta didn’t realize she could get pregnant by a human sim. She unexpectedly fell pregnant and recently gave birth to little Eva. Harvey was beyond belief. He had not only found an alien but created the first ever human and alien hybrid! Will he protect his partner and child from his coworkers? or sell them out and commit the worst possible betrayal…

That is all for today’s post! If you enjoyed reading about my off-screen household make sure to comment down below and I will most certainly keep you guys updated! Dag Dag!