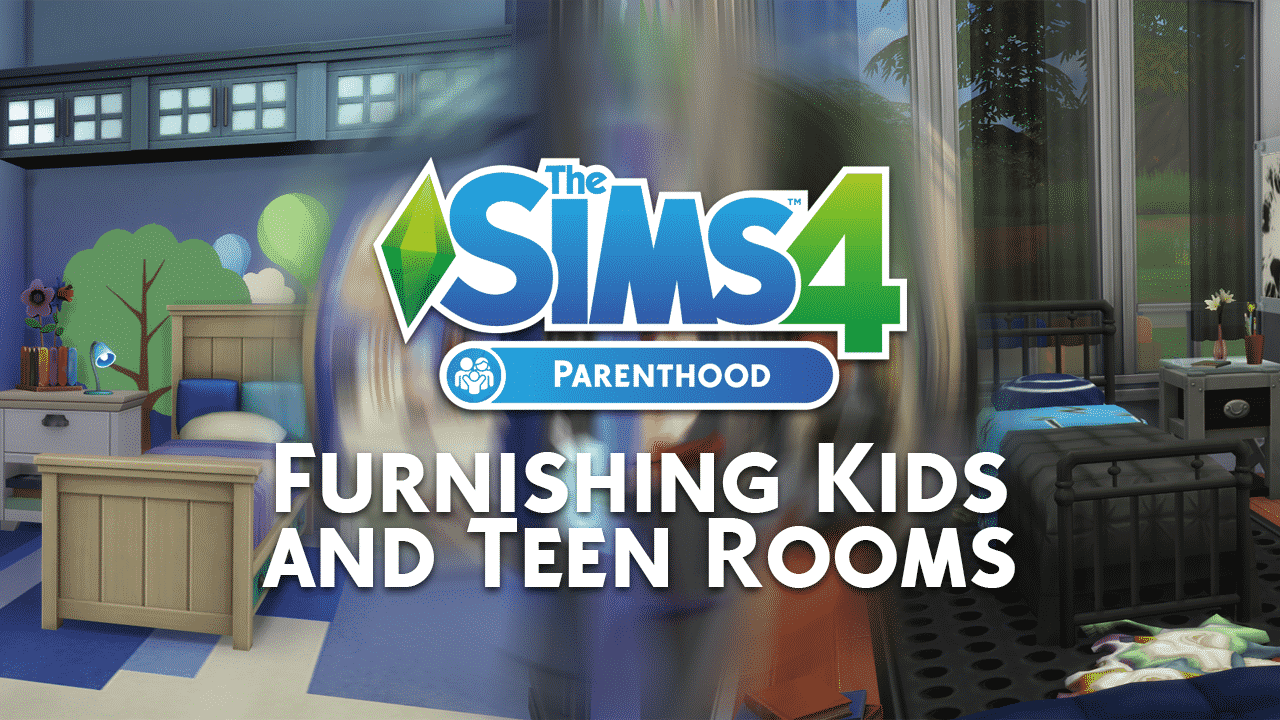 Hi, I’m Jason Sterling. The game play of the new Parenthood pack revolves around the lessons that both children and parents learn during the process of growing up. However, there’s more than just game play in the pack. It has a wide range of new build/buy items. Today I’m going to focus on using them to create one room for two ages. A sim as a young boy and as a teenager. For the pictures below I’ve used only the Parenthood pack and the Base Game. 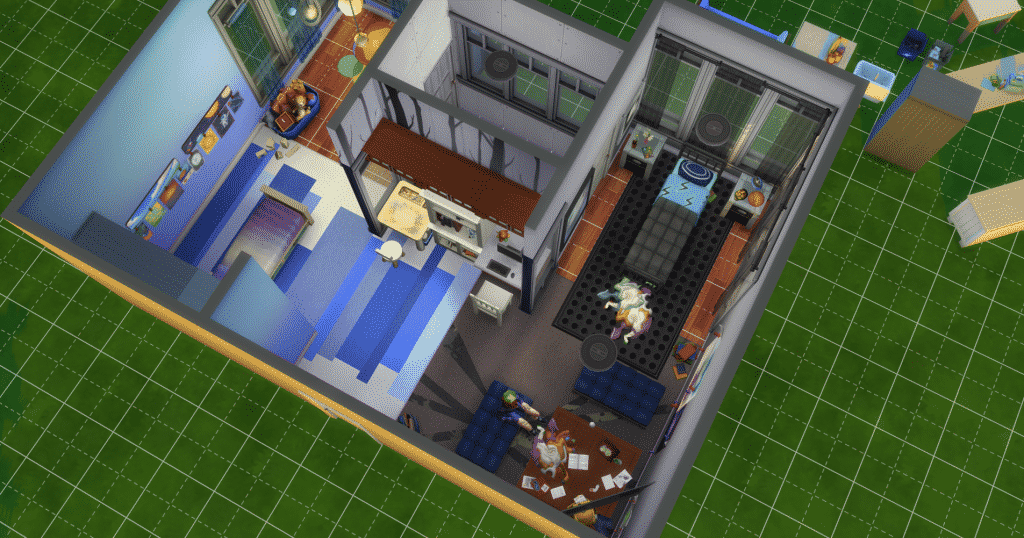 The decoration in the child’s room is more influenced by his parents but with his “input” regarding colors and décor. Hence, there’s neutral wood on the furnishings and the cabinetry matches the rest of the house. The child’s favorite color is blue. As a result there’s also a reliance on blue. The style of the bed matches the overhead cabinets and end tables. This creates a cohesive “bought off the show room floor” look. This is often the case with children’s rooms. The parent picks a suite of matching items from a furniture store. In addition, the art on the wall was created by the room’s occupant at his art station off screen.

In the picture below you can see a number of new items:

Next, I tossed in a few Base Game items and we have a lively, real life appearing child’s room. You can see the same thing through out these pictures.  The new Parenthood Pack itself is the main feature. 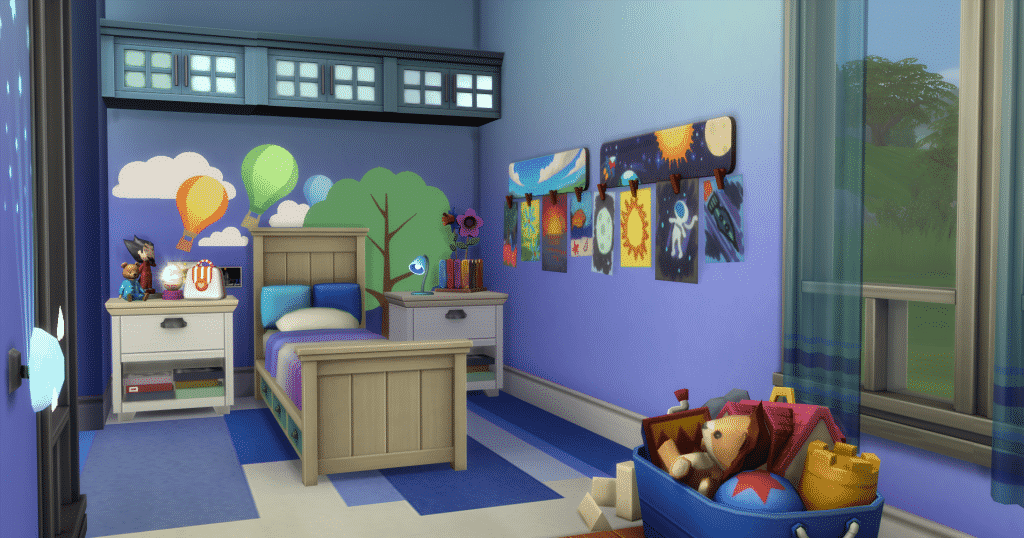 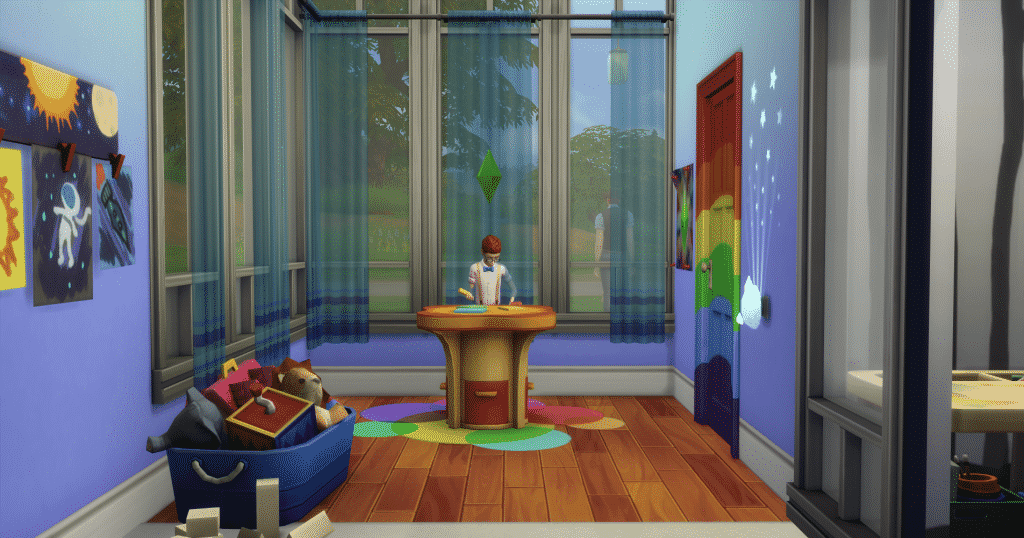 He’s a child. As a result, I’ve placed the new Buildems Blocks Play Table on the activity side of the room shown above. In addition, I’ve also placed the night light right by the bathroom door. In that way he can find the door easily in the dark. The new shears are his favorite blue. The Extended Vertical Windows from the pack look great with the bedroom furniture. These can be used as floor to ceiling windows in smaller wall height rooms. I used a base game door done in bright rainbow colors (HAPPY PRIDE MONTH!), poster, rug and wall color to finish off the room.

By contrast the teenagers sleeping area pictures below is meant to reflect a darker, moodier personality.  The new Metal Framed Single Bed in the pack is paired with two end tables from the base game. They don’t match. He associates matching furniture with being a little kid. The same shears are here but in gray to reinforce that the world is darkness- lol. The new Private Journal where he records the misery of first world problems has been carelessly left out. It can be hidden in the bed to keep out prying eyes. You can see a bit of blue which is still his favorite color. I’ve polished off the look with slightly messy clutter and wall art from the base game. The flowers I imagine are from his love interest and probably dead, lol. 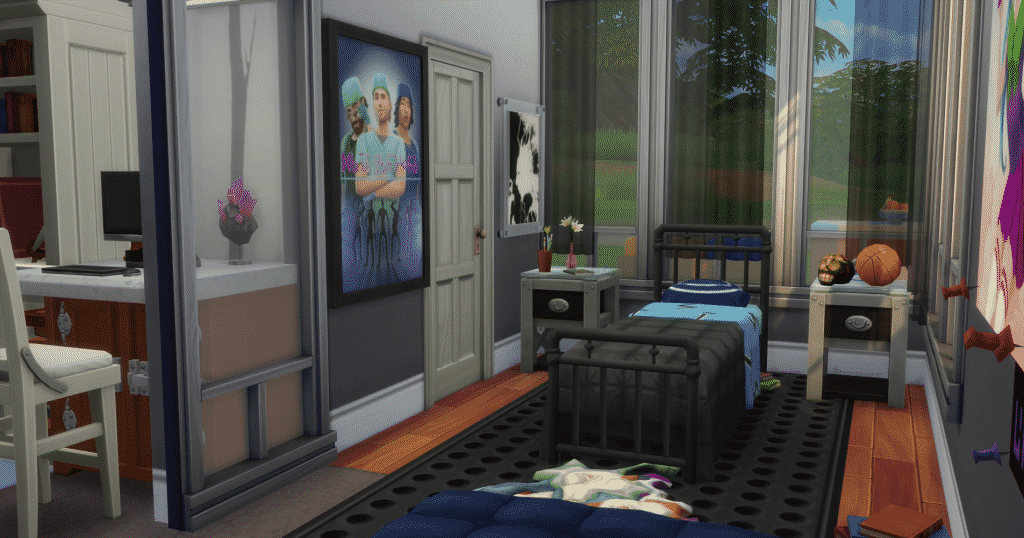 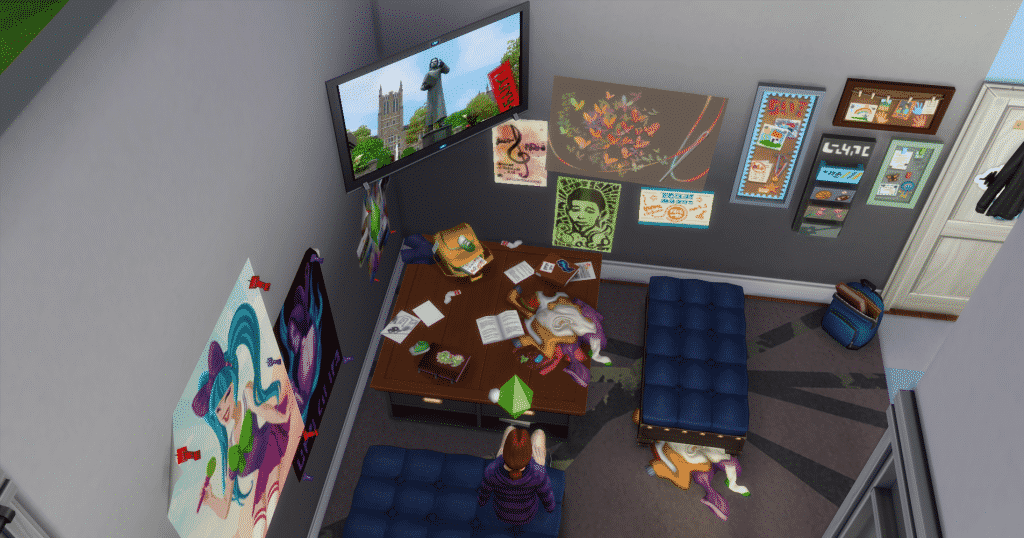 You can see above that the teenager’s activity area consist of a television- ha! There’s Base Game benches surrounding the new Rustic Square Living Room Table salvaged from the family room remodel. This gives his friends a place to hang. The table is covered with the new Kid’s Clutter because mom and dad are no longer cleaning up the room. The carpet is the same as the child’s side of the room but it’s a darker, moodier selection. The walls are a jumble of different posters and ideas. We have the Super Wicked Rad Bad Cool Poster set. The Hobby Board was the one contribution by his parents. Hence, it’s right by the new Personalized Kid’s door as though it’s not really a part of the space. A few Base Game items complete the look.

The clear break from childhood to teen is evident in the central part of the room pictured below. The new BroHill Kids Activity Wonderland is replaced with a built in desk constructed of the BroHill Kitchen Cabinetry Island. Seating is a spare BroHill Barstool. The handmade plate was replaced with a video game collectible next to the computer. The wall pattern for the art/computer nook is the Misty Forest. 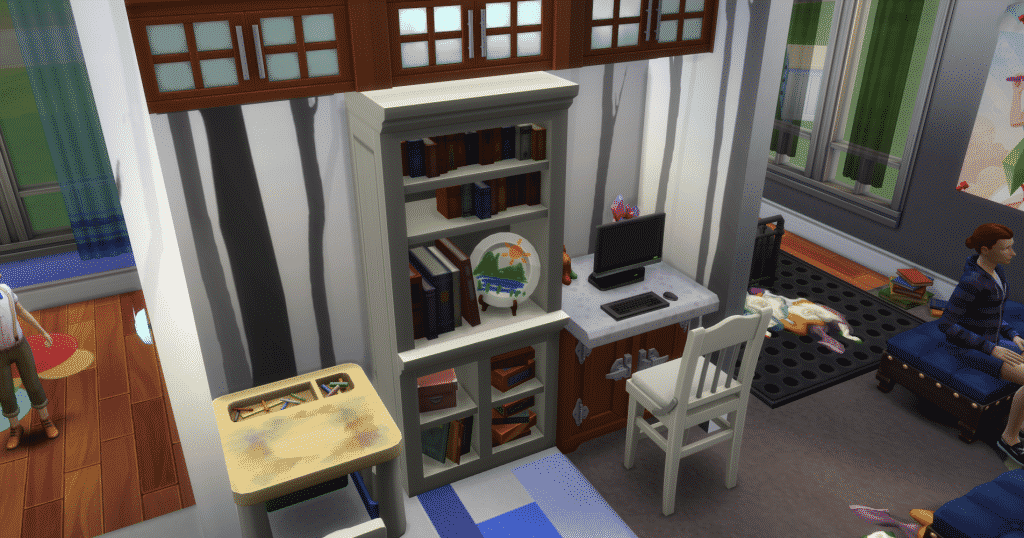 In the bathroom it’s the same. A rubber duck and single dispensary of soap are swapped as a teenager with a tray of styling equipment and an assortment of beauty products next to the new Single Pipe Sink and Cabinet. On the wall are the Medicine Cabinet and Teen’s Oval Mirror both new with the pack. Further, I’ve used the teen’s color choice for the Extreme Shower Tub w/ Customizable Curtain. The wall pattern here is the Tiled Patterns with Wainscot Paneling. It’s shown in two different colors for the two different age ranges. 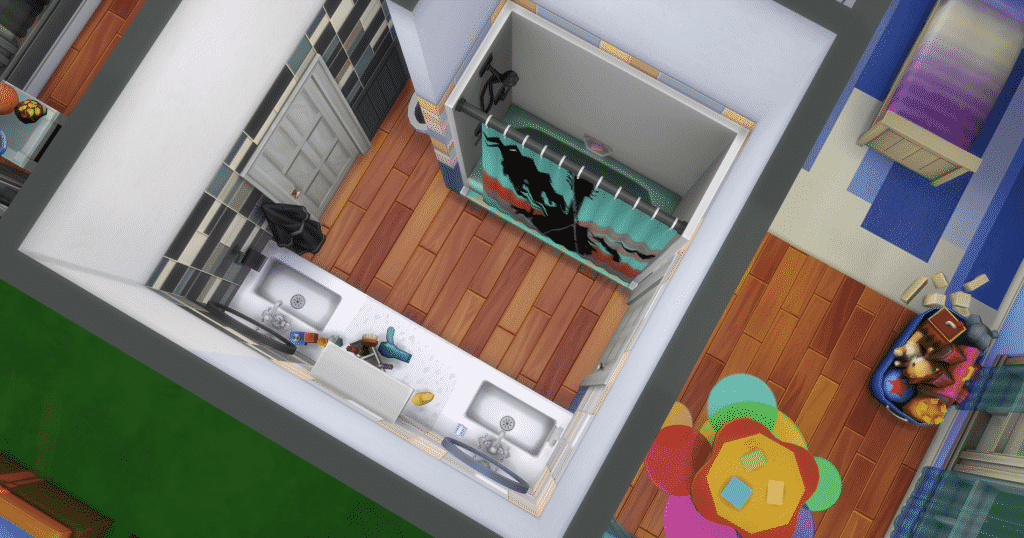 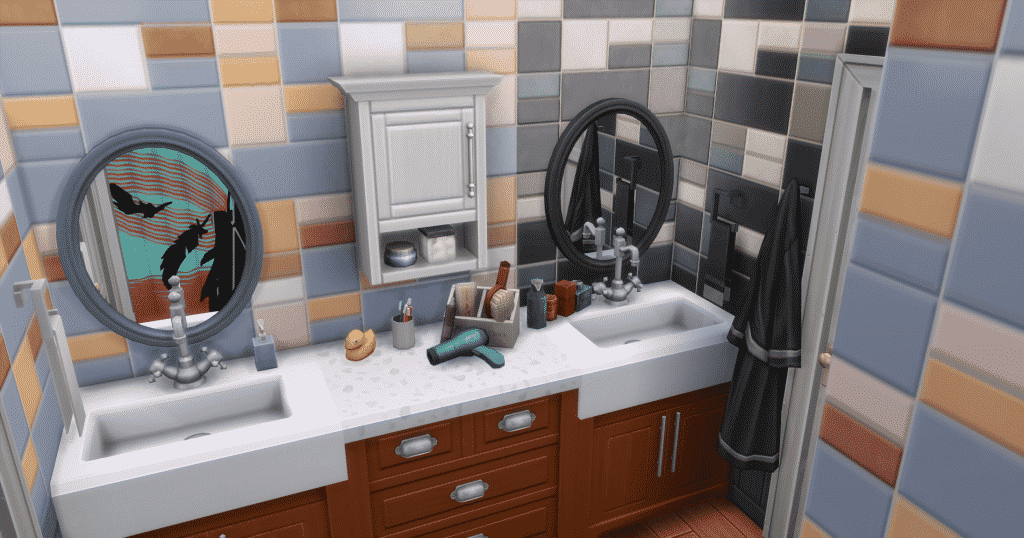 This is a pretty brief view of what is possible with just the base game and the variety of options available in the build buy catalog in Parenthood. There’s are numerous new objects in a style and feel that we haven’t yet had in the game. From cabinetry to rugs, wall decor, new shear curtains and so on you are sure to find many ways to express your style in the game.

I hope you’ve enjoyed this article and I also hope you are inspired to apply your own ideas and experience to creating your sim’s spaces. This build was featured in my live Twitch broadcast archived here: https://www.twitch.tv/jasonanthonysterling/videos/all  You can see and hear the entire mental process I took to get this room. Thanks for reading.