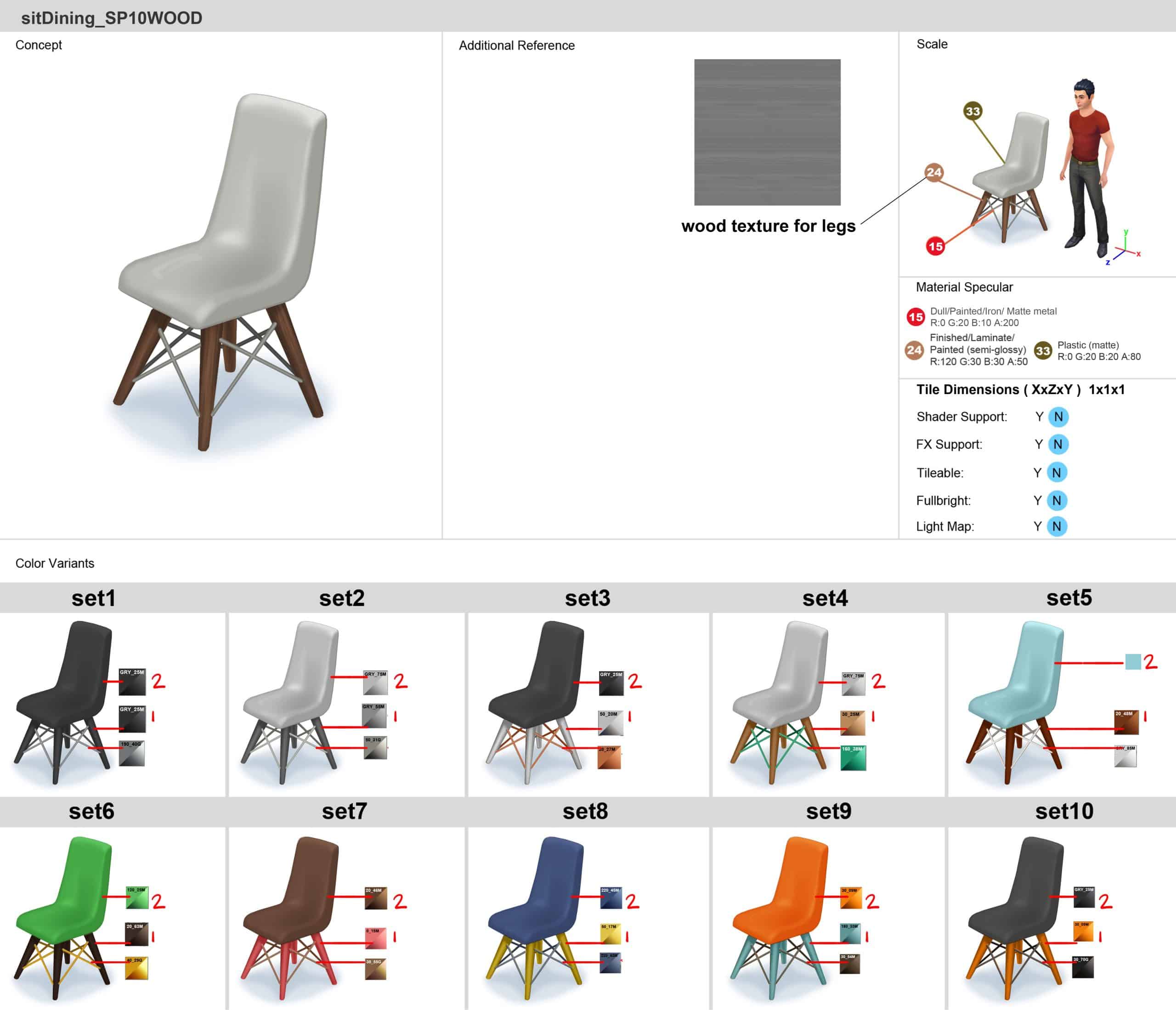 Ever wanted to know how The Sims team go about making objects for the game? Well, SimGuruGraham has posted a little something over on the forums which gives Simmers an insight into the process.

With our objects for this upcoming Stuff Pack now selected, our concept artists have started work on creating object guides. Whereas the original concept art provides a basic look at each asset we’ll create, a guide ensures that nothing is left open to interpretation for the modeling artist. This includes showing the object from different perspectives, and visualizing the scale of an object in contrast to the height of a Sim. It answers all construction questions, such as… Should the object tile seamlessly if it’s placed next to itself? What size should the object’s footprint be? Does the object emit any light or VFX? How shiny should various surfaces of the object be? Perhaps most importantly to players, the guide shows every color and pattern variant that the object will have, with each of the color values defined precisely. 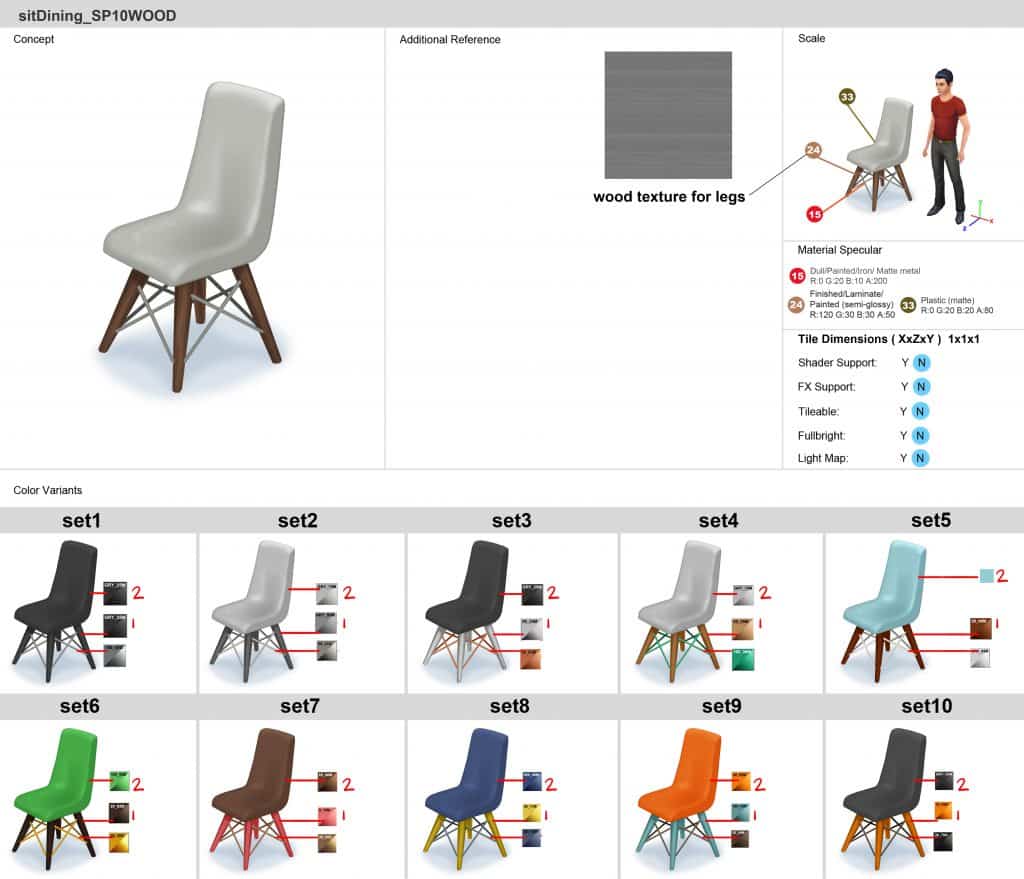 Guides are our concept artist’s final step in the process before we hand the art off to external partners. We have both internal artists who work here as part of the Maxis team, as well as external partners that help flesh out the breadth of catalog content that every pack includes. Our external partners first put together orthogonal drawings, and then go on to create the geometry and texture that the model uses. Our internal artists tend to work on brand new types of objects, while our external partners are given concept art of objects that match a template of something we’ve already created. We accomplish this by creating something we call a “block model”. Block models are the simplest way to represent the different types of objects you see in-game, and they contain key information that every object of the same type must include to function properly. For every object that you see multiples of in-game (beds, bookcases, dining chairs, trash cans, mailboxes, etc), a block model exists that defines its bare necessities. 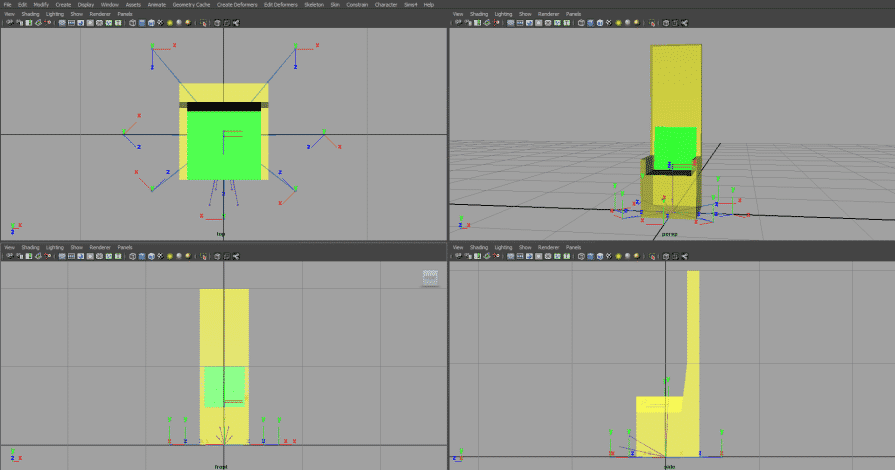 In that image you have the most basic form of a dining chair, as seen from top, front, and side profiles, as well as in perspective. The green portion of the model denotes a contact surface, meaning this is the part of the object the Sim’s body will make contact with when using the object. In this dining chair block model, the contact surface shows where the Sim will sit, and how far the Sim can lean back when sitting. The yellow portion of the model shows where it’s safe to build the geometry of the rest of the chair. As long as the chair is built within the space that the yellow area occupies, then the geometry won’t extend beyond the object’s footprint, and will minimize issues with the object causing clipping with other objects, or with the Sim. The block model also contains other important information, such as “bones” – which serve as the anchor point on the object that animations are authored against, “VFX joints” – the origin point for where visual effects spawn, and “decorative slots” – the spots on the model where smaller objects can be attached. (Such as placing a potted plant on a table.)

Getting back to the role of our external partners, the block model is a guideline for what they can build. They take the concept art provided by the artists here at Maxis, and their first step is to create an “orthogonal drawing”. Orthogonal drawings are a way to show three dimensional objects on a two dimensional plane, which allows the modeling artist to have an exact blueprint of the object’s shape from the front, back, side, and top. This is accomplished by re-drawing the concept art superimposed over an image of the block model, without exceeding the borders of the block model. The artist then builds a 3d model that matches the visual shown in the concept art, and fits within the space defined by the orthogonal drawing.

Here’s an example of an orthogonal drawing that was created for the dining chair from The Sims 4 Bowling Night Stuff. You can see how the drawing is superimposed over the image of the dining chair block model, and fits entirely within the borders of the block model…

Sometimes you may hear SimGurus refer to “mimics”. A mimic is simply a type of object that already has a block model, so that it can be referenced by our external partners, allowing us to easily replicate it. For an object to be a mimic, it means that all functionality on the object remains the same, and only the visual appearance of the object changes. This also helps define the difference between what our internal artists at Maxis do, in contrast with our external partners.

You may be left wondering, why does the distinction between external partner and internal Maxis artist matter? It’s important because it affects how we determine what we can make in each pack. For example, in the recent vote you selected your top 28 objects. Those 28 objects can include any type of mimic-able object in the game… which now includes that large round dining table, thanks to the work that we did internally for The Sims 4 Backyard Stuff. Each Stuff Pack has a set schedule, and all of our internal artist’s time has to fit within that schedule. We made the decision that the large round dining table was an important enough part of that pack that we wanted to spend an internal artist’s time on it. That’s the same pool of time we use when determining which new gameplay features we can include.

While this information may be a lot to take in, the work that I’m describing is all part of what we call pre-production, the period of time where most of us on the Stuff Pack team haven’t even actively started working on this pack’s development yet!