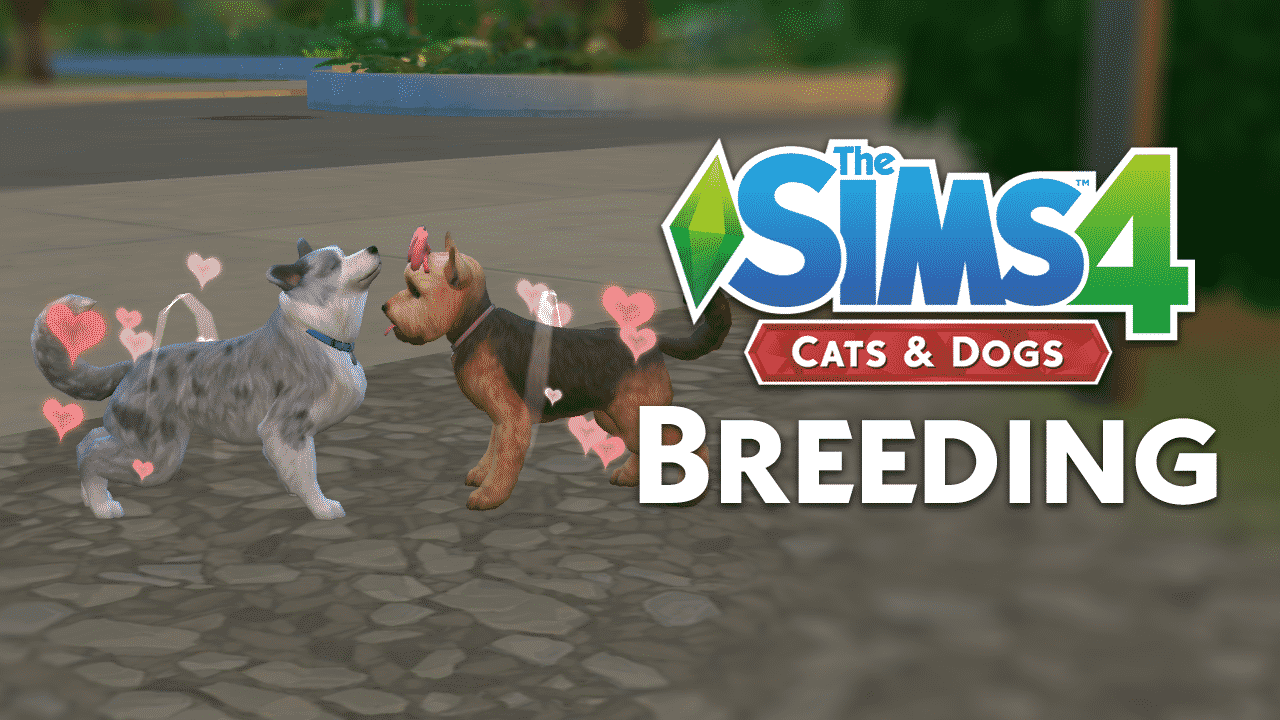 You asked and we delivered! By popular request, we’re going to walk you through the process of breeding and selling kittens and puppies in The Sims 4 Cats & Dogs! Be the cat or dog breeder you’ve always dreamed of being, at least in the world of The Sims. 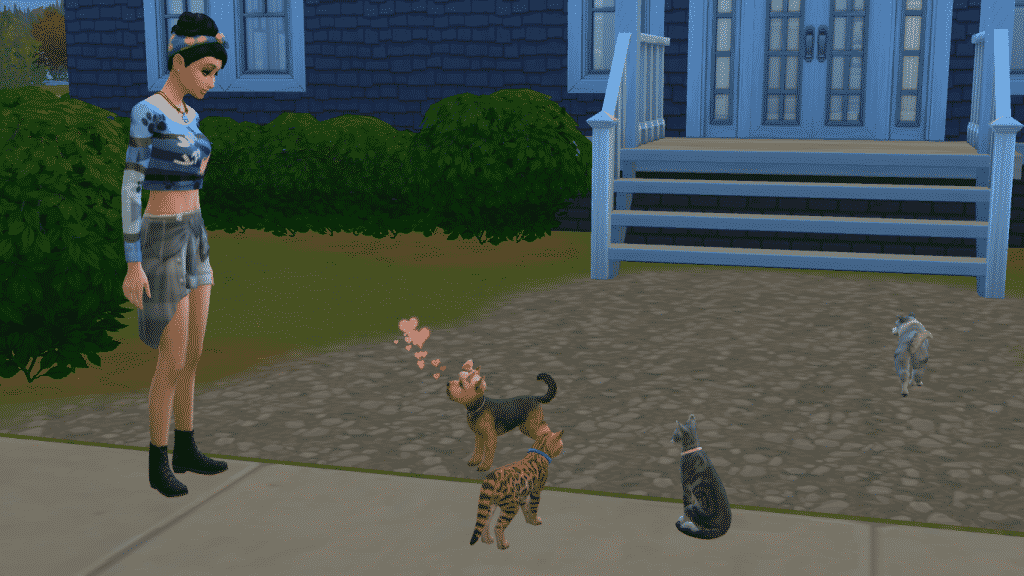 I made a Sim named Emilie Lake and gave her two cats and two dogs. As you might be able to guess, they are one of each gender because we are going to be breeding these lovable furballs to turn a profit. Emilie is a snob but also both a dog and cat lover. That seems suitable for someone who breeds cats and dogs for a living.

With a little bit of “freerealestate” magic, I moved them into their new home. Emilie immediately encouraged her cats and dogs to breed. It’s important to note here that your Sim must be friends with both pets in order to successfully encourage them to mate with each other. If your Sim is not friends with one or both animals, the mating will likely be unsuccessful. This wasn’t a problem for Emilie since she started out friends with all of her pets.

Her female cat, Libby, got pregnant right away but her Yorkie, Domo, took a few tries to conceive. Just like with Sims, a pregnancy isn’t always guaranteed when trying to grow your family. When a mating is successful, your pets will affectionately rub noses as hearts surround them. Your Sim will get a Happy moodlet from a successful mating. If it is unsuccessful, the pets will act aggressively with each other and your Sim will become sad from a failed mating.

After a successful mating, you’ll know within a few in-game hours if your cat or dog has conceived a litter of kittens or puppies. If a few hours have passed with no conception notification, try encouraging your pet to mate again. It may take some time, but perseverance does eventually pay off.

You won’t notice any changes in your cat or dog while she’s pregnant. I didn’t see a significant change in weight in Libby or Domo while they were pregnant. The good news is pet pregnancies are much shorter than Sim pregnancies. Only one day after getting pregnant, Libby and Domo went into labour. The labour notification for cats and dogs is the same one that pregnant Sims get.

After receiving the Gone Into Labour! notification for your cat or dog, keep an eye on her for a time. It will be a couple in-game hours before she gives birth. When the birth happens, your cat or dog will lie down and you’ll receive a notification that a kitten or puppy has been born. You’ll be able to name the new kitten or puppy. Libby had two kittens, one boy and one girl. Domo had three puppies, all girls. Using the Breeding Ground lot trait will help your pets give birth to larger litters. Cats and dogs can have one to three babies per litter.

Fun Fact: Amusingly, a pet giving birth to three babies awards your household with the Triple Play achievement. If your household number reaches eight from a new cat or dog entering the household, you’ll also get the Full House achievement.

Kittens and puppies have a tendency to inherit the traits of their parents, so it’s a good idea to pay attention to the traits of your cats and dogs if you plan on breeding them. Although this hasn’t been confirmed, traits may affect the price of any kittens or puppies you sell. One of Emilie’s kittens had some undesirable traits it inherited from its father and it sold for a little bit less than the other kitten and puppies.

Selling your Kittens and Puppies

Once the kittens or puppies have been born, you can sell them via the phone. In the phone tab, select Hire A Service. Sell Pet should be one of the options. Only kittens and puppies can be sold. If you want to get rid of an adult or elder cat or dog, you’ll have to put them up for adoption, instead. When you choose Sell Pet, you’ll be able to pick the kitten or puppy you want to sell. You can only sell one kitten or puppy at a time. 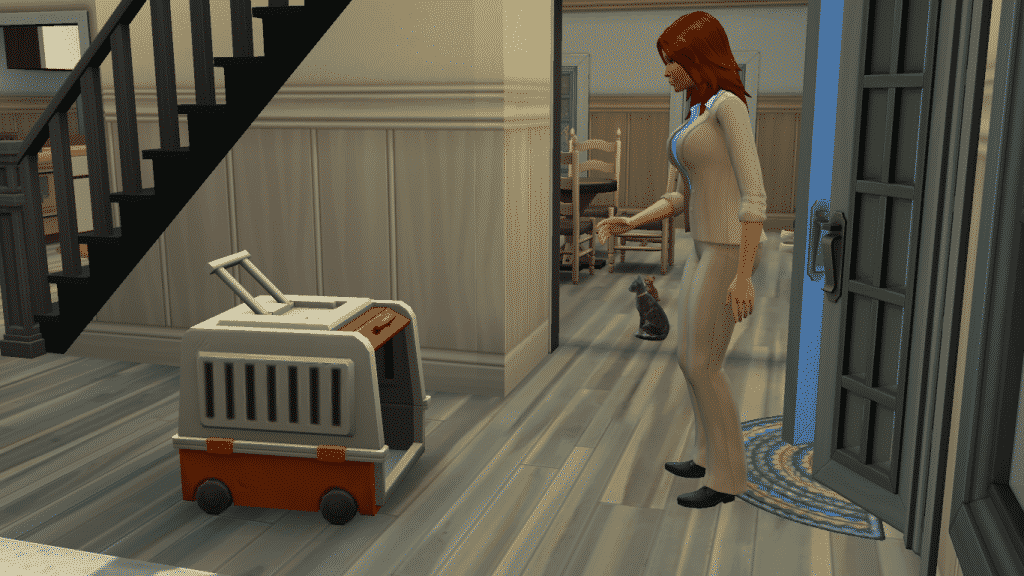 After confirming the sale, you’ll receive a sum of simoleons and a pet adoption agent will come to the house with a pet carrier to pick up the kitten or puppy. The price varies, but I received somewhere between §350-§400 for each pet. Other players report receiving over §500 per pet, so breeding cats and dogs for profit is definitely a viable option in The Sims 4 Cats & Dogs.

Pro Tip: If your Sim has the Cat Lover or Dog Lover trait and they sell a kitten or a puppy, they’ll be slammed with a hefty +4 Sad moodlet, called A Fuzzy Goodbye. This moodlet lasts a full 24 hours, so it’s not ideal to give these traits to your Sim if they plan on being a cat or dog breeder for a living.

And that’s it! As you can see, breeding and selling cats and dogs in The Sims 4 is a pretty easy, straightforward process. It’s also extremely lucrative! If you’re wondering whether your Sim could make a comfortable living as a cat or dog breeder, the answer is a definite yes!

Please be advised that while breeding cats and dogs for profit can be fun in The Sims, Sims Community strongly condemns the exploitation of animals in the real world. The pets in The Sims are immune to the harmful effects of irresponsible breeding, but our furry friends in the real world are not. #AdoptDontShop