It feels surreal that I’m finally writing an actual article reviewing The Sims 4 Seasons Expansion Pack instead of just writing a conspiracy theory (as I have in the previous few months) talking about how The Sims Team might be hinting at a Seasons pack BUT YES; The Sims 4 Seasons has finally released to the public and I couldn’t be more excited to review this Expansion Pack just because it’s something that I’ve been waiting for 4 years now.

Anywho, is The Sims 4 Seasons Expansion Pack a worthy $40 successor to its previous iterations? Let’s find out!

This review is based on 25+ hours of gameplay.  Even though I was given an early review copy by EA to test the game, I am not by any means paid or bribed to state positive (or negative) opinions about this Expansion Pack.  I will give my honest opinion of this pack; its content and what it brings to the game.

Create A Sim is full of surprises with The Sims 4 Seasons as there’s something new for almost every category, age and fashion choice. Adults get the biggest amount of new items as usual including new hairstyles, hats, accessories and of course outfits to prepare them for cold and hot weather. However, there’s also a surprising amount of new items that your Children and Toddlers can also enjoy.

Yes, toddlers even get to enjoy new swimwear rather than having to use the diapers that you get with the Base Game.

Although there aren’t any new Aspirations or Traits that you can choose in CAS this time around, it seems that The Sims Team found a substitude for them with Holidays and Reward Traits that you get to purchase in Live Mode.

Click here for a full Create A Sim Overview!

Build Mode brings fresh new items to the table with a unique combination of wood and concrete materials & colors which weren’t that present in The Sims before, making your Sim become one step closer to nature with all the new items.

Other than the new furniture there’s a decent amount of new holiday decorations that you’ll find very useful for both pre-made holidays and custom holidays that you create.

Don’t be scared if not all decorations present to you in Build Mode as items such as the Evergreen Holiday Tree and the Decoration Box only give you more options to decorate the tree and your home by interacting with them in Live Mode.

Swingsets, Beekeeping boxes and Kiddie Pools are just some of the new objects that you’ll get with this Expansion Pack giving you more interactions and fun throughout the year. I must say that I was a little disappointed by the lack of objects for the actual pool which I think we all need.

Normally in previous reviews for Expansion Packs this is the part where I review the new world that we get. However, since the idea to add a new world with The Sims 4 Seasons Expansion Pack has been replaced with a better idea to add weather in each world that we’ve got so far, I’ll be showcasing and reviewing weather and seasons in some of the current worlds that we have in the game.

One of my favorite times of the year (at least in The Sims 4 Seasons). Not only because it looks so colorful when the skies are clear but also because this season (along with spring) is truly dynamic when it comes to surroundings with trees slowly decaying all around you.

Unlike in The Sims 3 Seasons, leaves won’t immediately fall from the trees. It will take a few days for trees around you to start decaying. Until then, you’ll slowly notice the gradual change of leaf colors go from green to brown.

Weather occurances that you can mostly expect during fall are cloudy skies, rain and wind. However, you might be surprised by mysterious weather types that might strike you not only during fall but during other seasons as well.

Fall is beautifully done in The Sims 4 Seasons and it makes the game and its art style much more lovable.

The first (and only) thing that I was screaming my lungs out about was the announcement that The Sims 4 Seasons won’t have any snow depth in the game. What this means is that there’s not even a milimetre of extra layer added to the ground once snow falls. I was really displeased by this when it was initially announced by SimGurus but after actually getting my hands on the game the snow isn’t that bad at all. Sims (and their pets if you have Cats & Dogs installed) will leave actual footprints on the ground. There are a couple of things that make snow look really natural in The Sims 4 Seasons. Objects that are outside on the ground during snowfall will have a white gradient on the bottom part of the objects making it seemlesly blend with the ground instead of just sticking out of the snow like we had in previous 2 games. There’s also a truly unique texture pattern of snow that, when you zoom out, you’ll notice that snow and the way it fell down on the group doesn’t look the same in all areas.

Winter positively surprised me after I got my hands on it and, along with Fall, it’s my favorite season – mostly because it completely transforms everything around you and make it seem like you’re playing a brand new world. Honestly, I’ve had so many comments on my videos / posts from people asking which world am I playing with mostly because they couldn’t recognize it instantly.

As you step into spring you’re going to notice the fac that snow won’t be gone right away. It’s a gradual process which takes a bit of time (and temperature).

With Spring the grass will gradually become more lush, there are flowers scattered on the ground around the worlds and the weather is much more pleasant for your Sims.

There are times when you might be expecting a thunderstorm. However, the chances for that are low. Still, when that does happen it’s best advised to take cover as thunderstorms in The Sims 4 Seasons are frightening. Each lightning strike will completely light up the neighborhood that you are in.

World down below is Windenburg from The Sims 4 Get Together 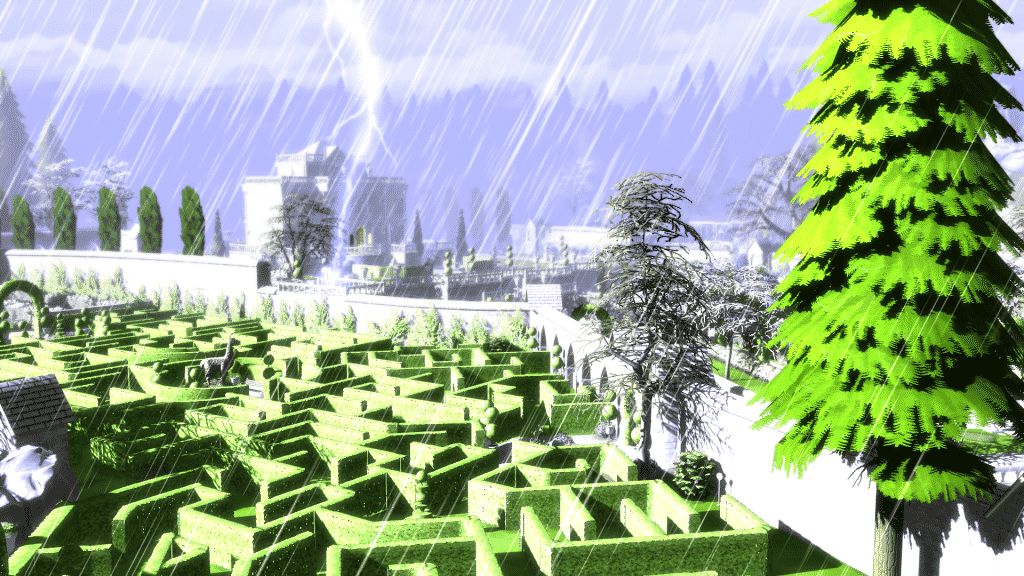 Spring is beautifully portrayed and each day is full of surprises with this season.

I was quick to negatively judge this season considering the fact that we had eternal summer in The Sims 4 Base Game for almost 4 years and that previous iterations of Seasons in The Sims Franchise didn’t really change the look of your surroundings that much but I’m glad that that’s not the case with The Sims 4 Seasons.

Sure, occasionally there are fairly warm days when nothing much has changed around you. However, as soon as your weather user interface shows a heatwave coming up you should prepare for taking hundreds of screenshots (at least that was a case for me) because every world is simply brilliant during a heatwave. With heatwaves around noon the world will shine brighter than usual but during the sunset hours the sky will turn almost pink. Not only that but you might also notice that the sun is much bigger than before!

With summer you can expect lots of sun, rain and even wind. Still, do note that weather is unpredictable in this pack and will change from year to year.

Speaking of year to year, does that mean that we get..