The Sims 4 Realm of Magic allows your Sims to gain almost unlimited power as a Spellcaster, but beware! If your Spellcaster isn’t careful, they could wind up cursed!

Curses are negative effects that will afflict your Sim in a variety of detrimental ways. Anytime your Spellcaster fails to cast a spell or brew a potion correctly, there’s a chance it could backfire and leave your Spellcaster cursed. Spellcasters can have up to three curses on them at one time.

Curses are not timed buffs! They are permanent status effects that will plague your Spellcaster for the rest of their lives unless you get rid of it via a spell or potion. Curses cannot kill your Spellcaster, but you will want to remove curses as quickly as possible because they can be quite a nuisance. It will be difficult to do just about anything with a cursed Spellcaster.

Spellcasters cannot cast curses on other Sims. They will only affect Spellcasters after some kind of magical mishap. They are an unfortunate random event, although your Spellcaster’s rank and abilities will influence the likelihood of failing a spell or potion. 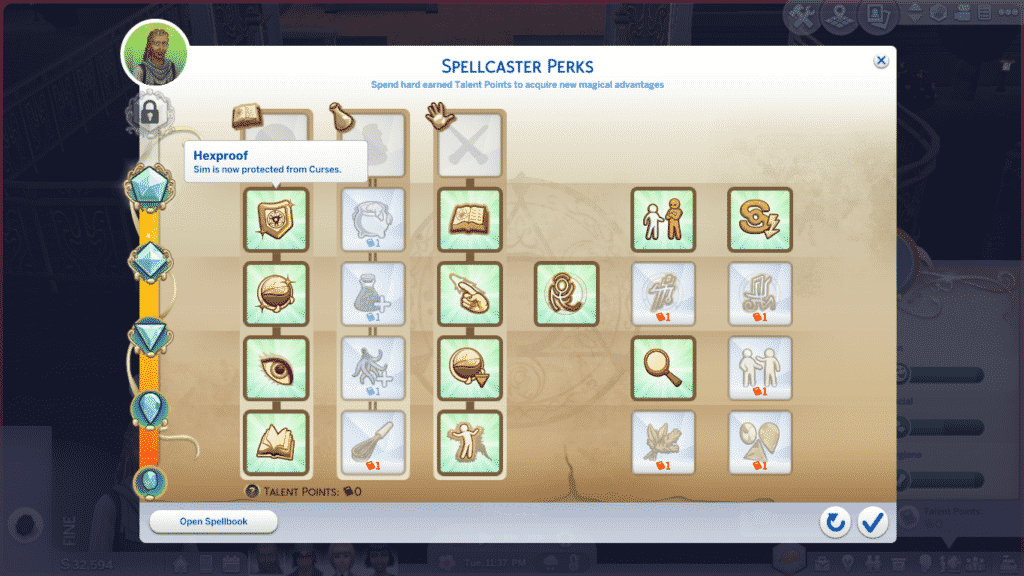 The best offense is a good defense! Avoiding curses in the first place is the best way to ensure your Spellcaster’s journey to greatness doesn’t get slowed down. There are a number of things your Spellcaster can do to reduce the likelihood of being afflicted by a curse. Of course, being a high ranking Spellcaster always helps, but perks and traits can further aid in avoiding curses.

Sometimes, despite our best effort, things blow up in our faces. It may not always be possible to avoid being cursed. Luckily, there are two ways your Spellcaster can remove a pesky curse.

There are a total of ten possible curses your Spellcasters could be slammed with if they fail to cast a spell or brew a potion.