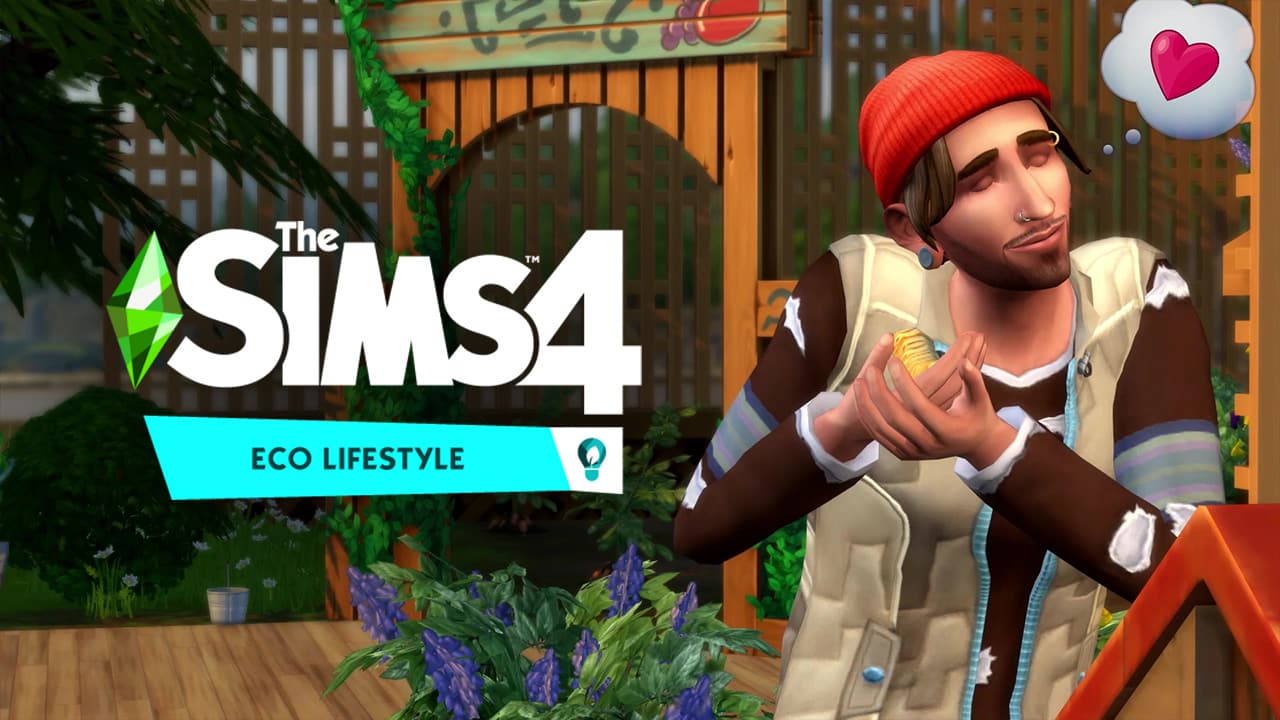 Any and all features discussed in this article should be considered speculation until we receive confirmation about said feature from The Sims Team. We’ll keep you up-to-date on all the latest news, so keep checking back with us as more info about Eco Lifestyle comes to light!

The Sims Team has just announced the newest expansion pack coming to The Sims 4; Eco Lifestyle! This pack is themed around working together with other Sims to revitalize a polluted city. Similar conservationist concepts were touched upon in packs like Island Living and Tiny Living, but Eco Lifestyle looks like it’s taking the eco-friendly game to a whole new level.

We noticed a few things both obvious and not-so-obvious from the trailer that we’re definitely curious to see more about in the coming weeks! 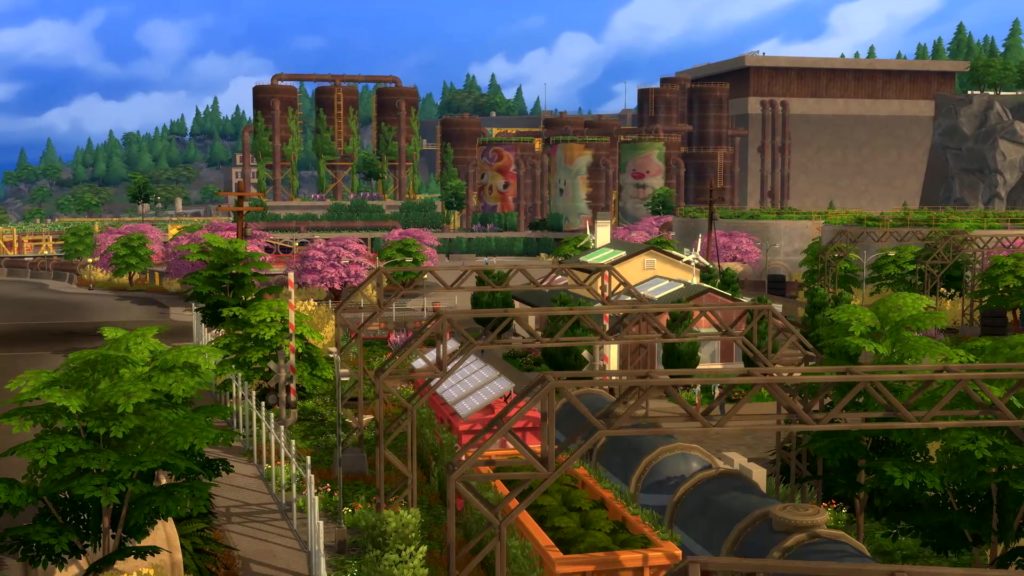 A brand new world called Evergreen Harbor is featured in the trailer. At the beginning of the trailer, the world looks like an apocalyptic nightmare, rampant with trash, pollution, and a thick brown smog blocking the sky. Through the efforts of Sims working to make a difference, the landscape becomes a greener, brighter, more inviting place for Sims to live. 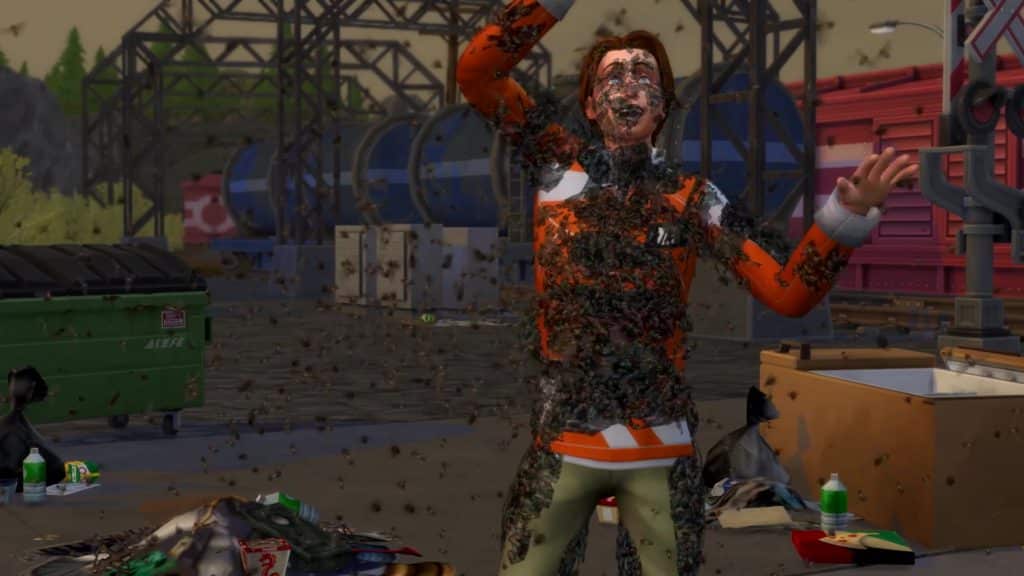 No new death types have been confirmed for Eco Lifestyle just yet, but we couldn’t help but notice this image of a Sim covered in flies near the beginning of the trailer. Long-time Simmers will remember that flies were a death type in The Sims 2 and death by flies looked eerily similar to this shot. Hmmm. 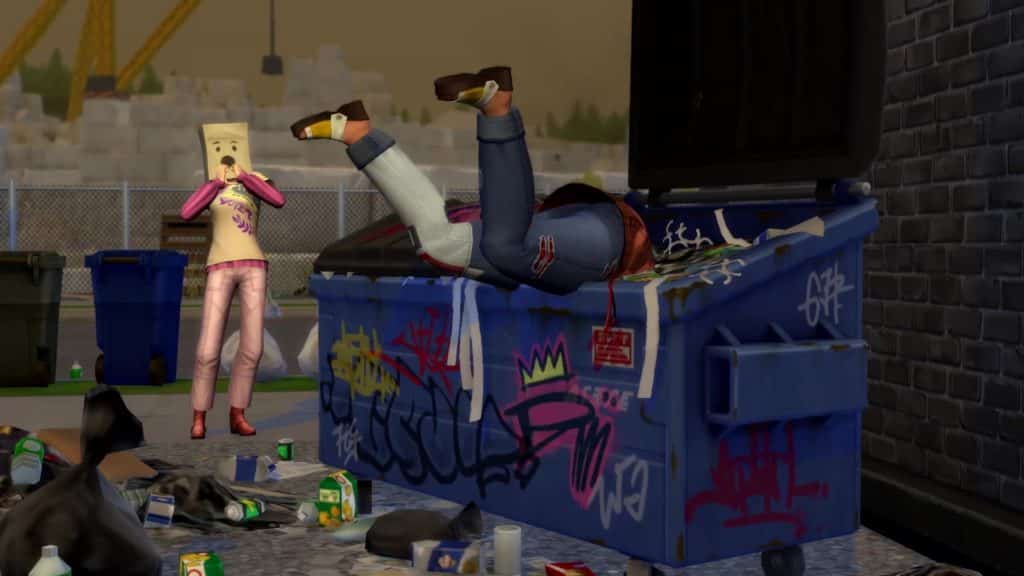 Another possible throwback to The Sims 2 is the paper bag head. Back in ye olden days of Sims, this was a sign your Sim’s wants weren’t being fulfilled, causing them to have a breakdown. The Sims 4 doesn’t have the same wants and fears system, so we’re pretty sure the paper bag head won’t return in the exact same fashion, but perhaps it ties into gameplay somehow. If not, it’s still a pretty funny fashion accessory. 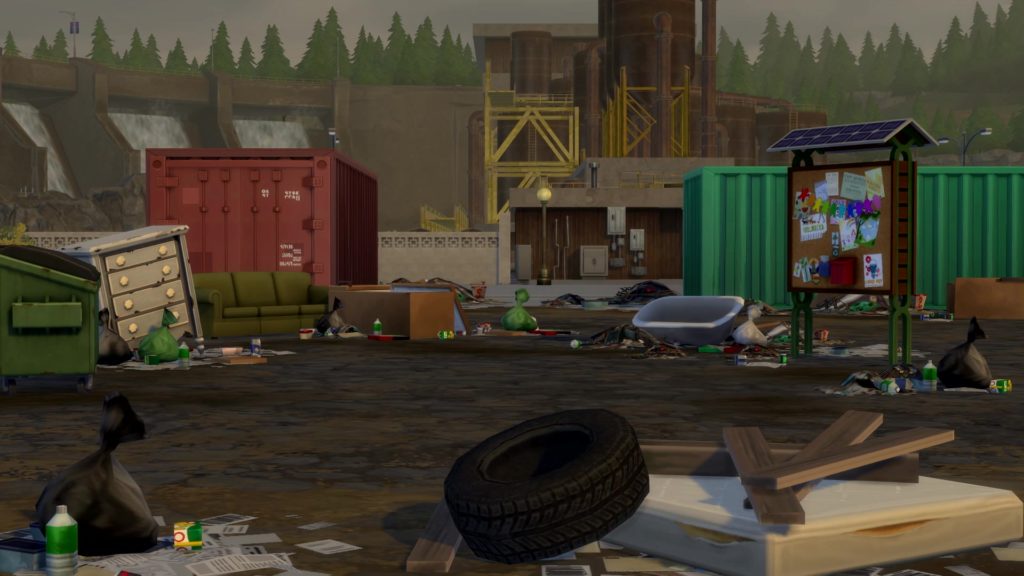 An area that looks like a dump full of worn down furnishings was spotted in the trailer. Many of these broken and dirty furnishings are from the base game. Perhaps this means our Sims will be able to throw away or replace existing furnishings as they succumb to wear and tear over time? Only time will tell. 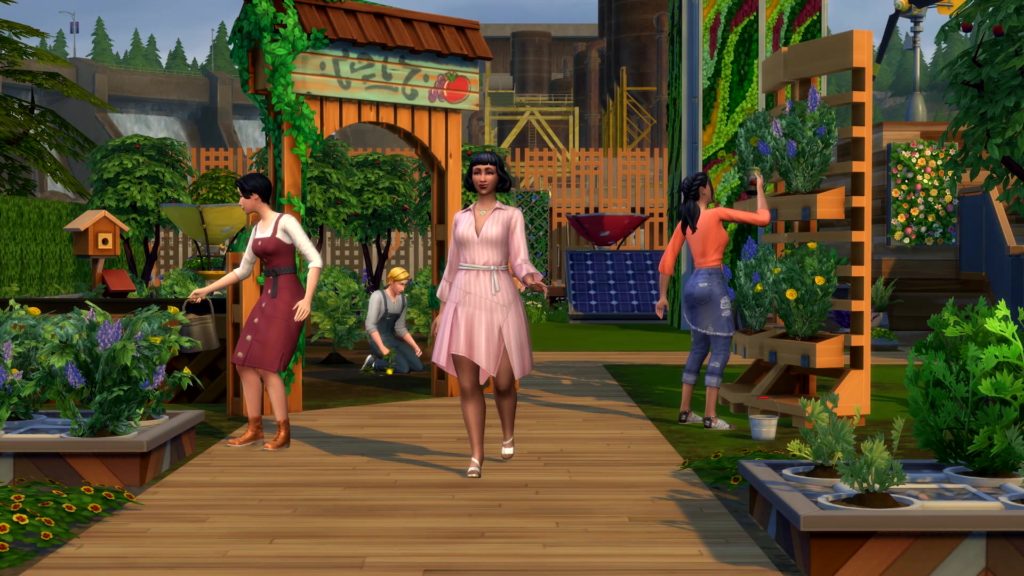 A new vertical garden can be seen being tended to in the trailer, as well as new planter boxes that seem to be supporting plants in more sustainable ways. In a pack focused on the environment, it’s great to see that even the way our Sims garden can be more environmentally friendly and sustainable. 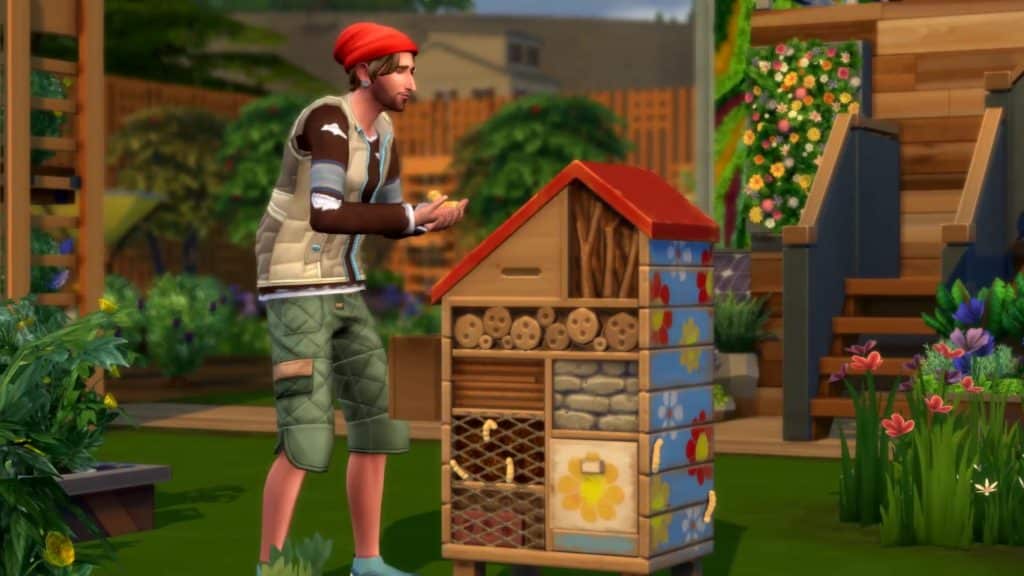 There’s some debate in the community about the type of animal seen in the trailer being cuddled by a Sim. Some people suggest they are silkworms. Worms can definitely be seen crawling in and out of the bottom compartment of the box. Others have said butterflies; however, the sounds and appearance of the animal the Sim is cuddling looks more like a baby chick. I know I wouldn’t want to cuddle with a worm, anyway. Since the box has multiple compartments that look like they could accommodate different species, perhaps this box can house multiple types of creatures. We’ll definitely be on the lookout for more info about this feature. 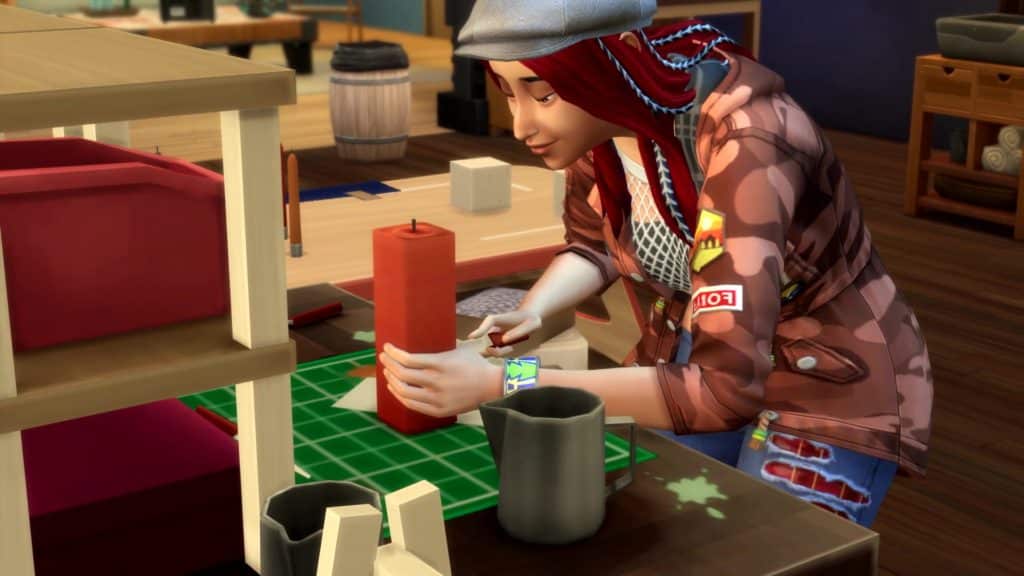 Candle making was featured prominently in the trailer and many different types of candles can be seen in this scene. It looks like they even burn down to the wick over time! We don’t know much more about candle making right now, but this author hopes they can be scented and tied to emotions. It would also be neat if the wax from burned candles could be reused to make new candles. 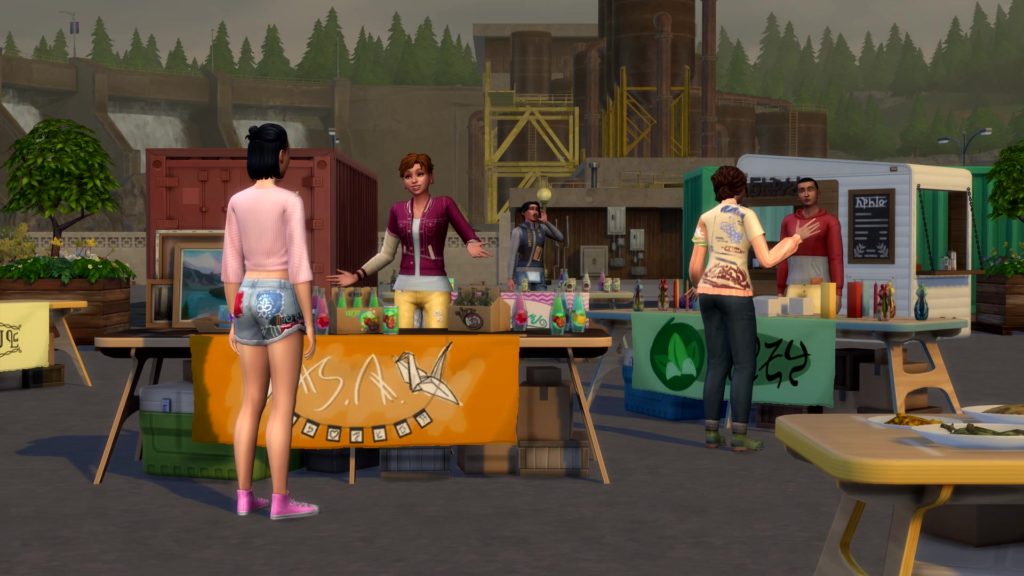 Market tables were featured in both City Living and Jungle Adventure, but the ones seen in the Eco Lifestyle trailer look like they have more of a focus on fundraising. Sims buying all the homemade goods from the tables are dropping money into a box attached to a large board that looks like it’s outlining planned projects for the area. We’re also interested to see what kinds of things our Sims will be able to craft and sell at these tables. 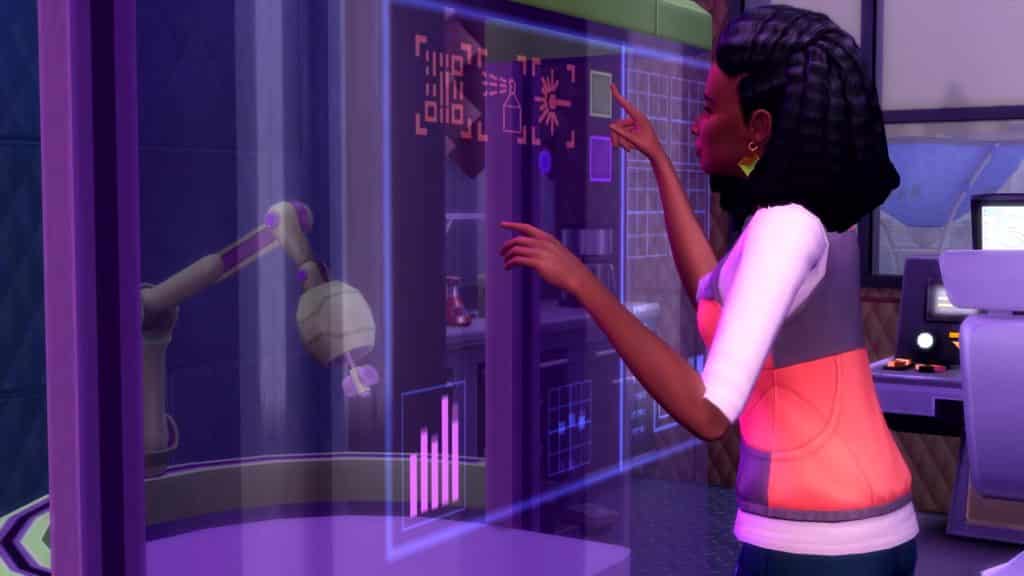 Tech-savvy environmentalists rejoice! It looks like our Sims have some new high tech ways to save the environment! In the trailer, a Sim was seen designing what looks like some kind of trash vacuum on a tablet and then bringing that creation to life at an invention work station. While it does look suspiciously similar to the invention station from the scientist career in Get To Work, the inventions seen in the trailer are definitely brand new. 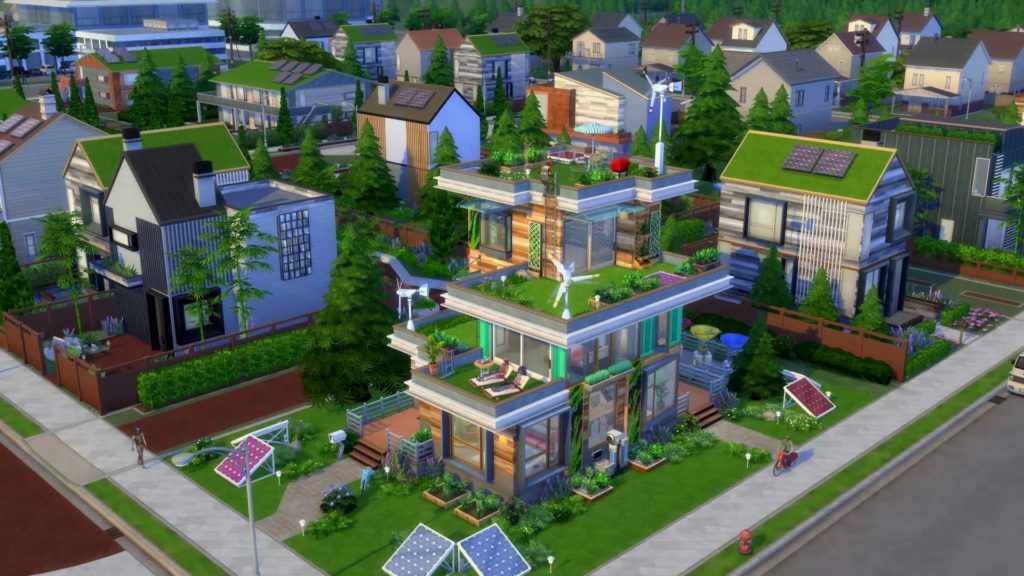 Many players were disappointed about the exclusion of solar panels and windmills in packs like Laundry Day, Island Living, and Tiny Living, but it looks like Eco Lifestyle is finally going to deliver these long awaited items to players! We wouldn’t be surprised if this has an impact on your Sim’s bills, too. Perhaps our Sims can even live bill-free! 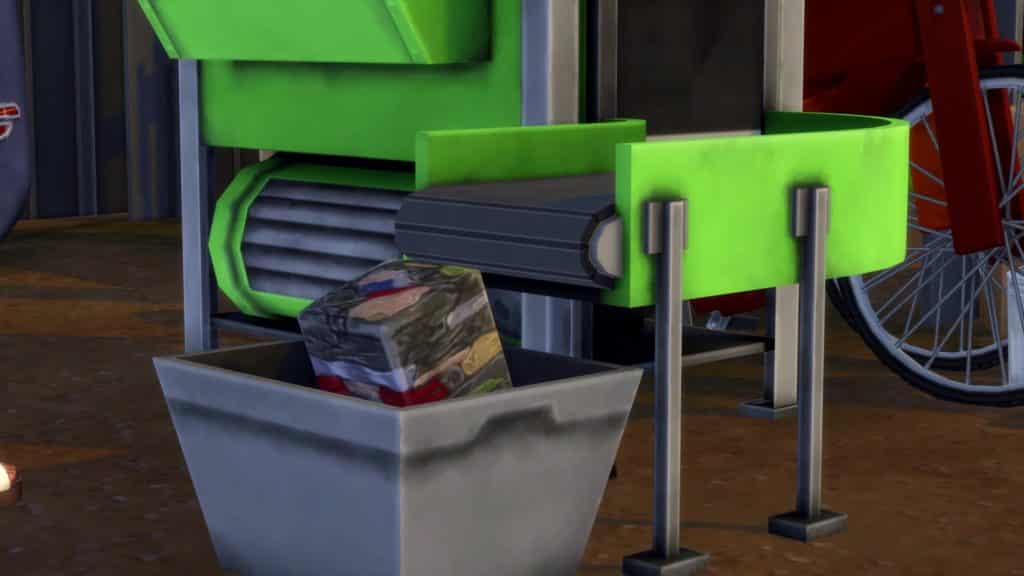 A Sim in the trailer was seen compacting trash into cubes, although we’re still not sure how this will incorporate into gameplay. We’re interested to see what can be done with this repurposed trash! 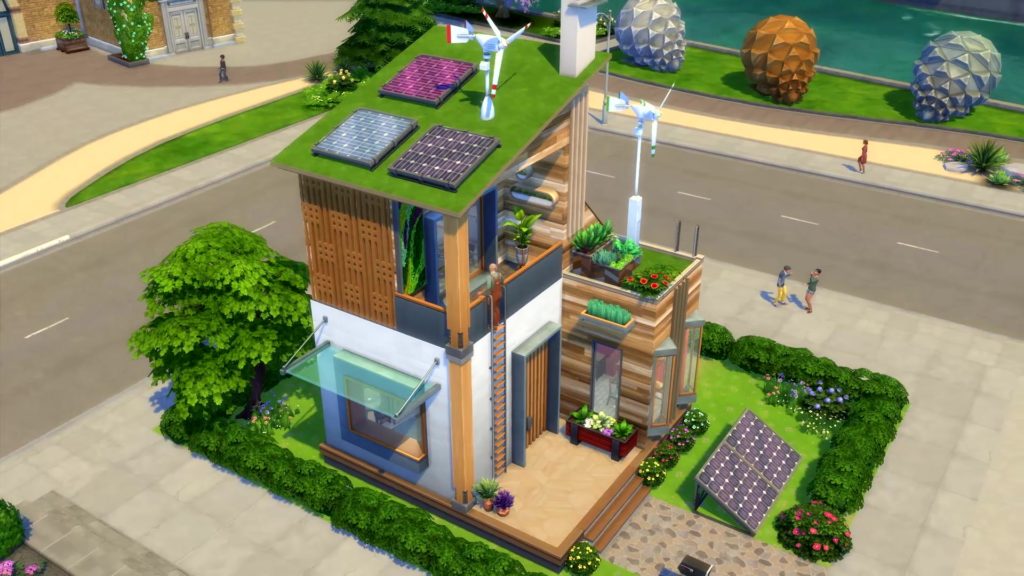 Another long-awaited item was seen in the trailer; functional ladders! Now our Sims can finally build the eco-friendly loft of their dreams! The best part? SimGuruGeorge just confirmed on Twitter that ladders will be coming in a free base game update prior to the launch of Eco Lifestyle!

Ladders will be a base game update coming at launch. Eco Lifestyle will come with an additional variant. 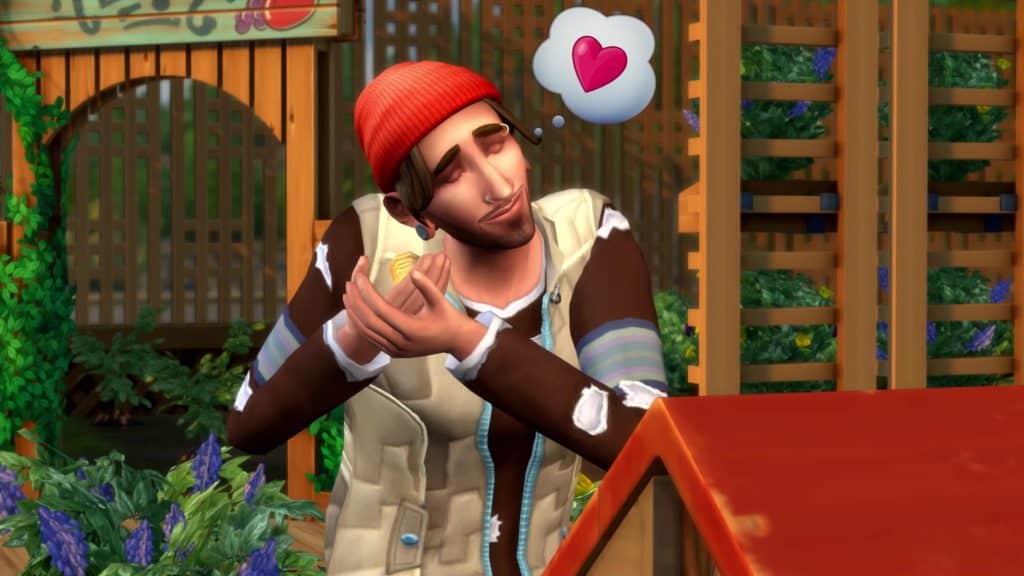 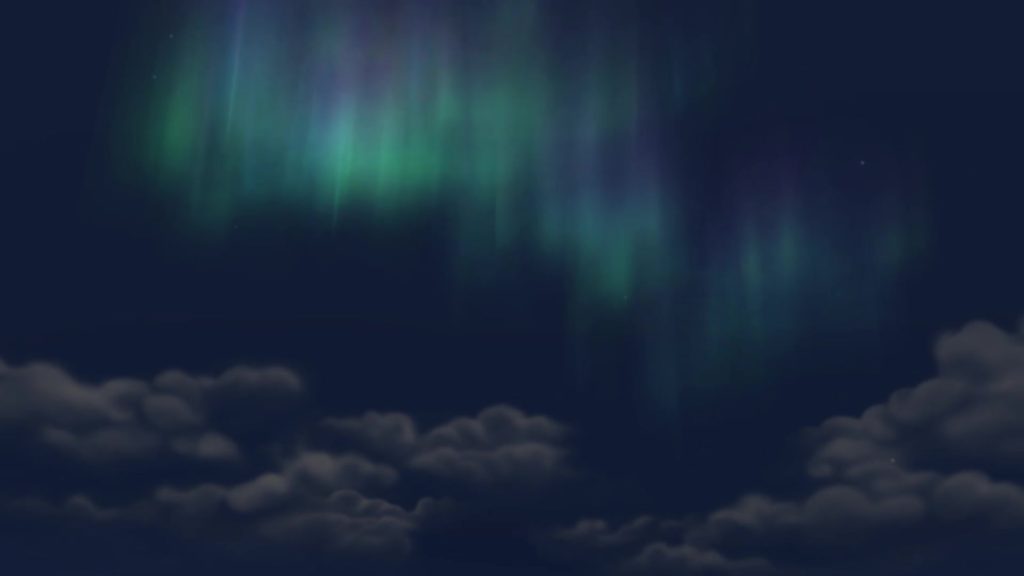 The trailer ends with  shot of a beautiful aurora painted across the night sky, taking us back to the world of Aurora Skies from The Sims 3. With all the smog seen polluting the air at the beginning of the trailer, our Sims may need to do some work cleaning up the town before they can admire this breathtaking view of the night sky.

What was your favourite part of the trailer? Let us know in the comments or come chat with us on social media!