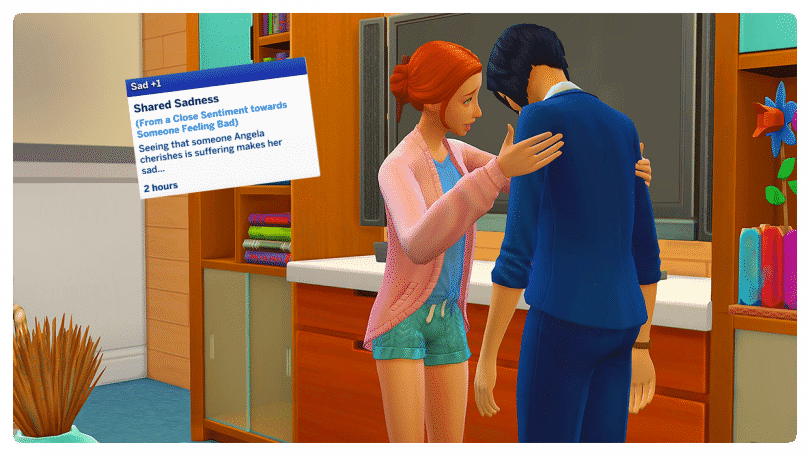 Sentiments aren’t just shiny new badges that Sims in The Sims 4 earn after positive or negative results of certain interactions. They determine the way Sims behave in front of each other and how their autonomous behavior will be after getting a certain Sentiment.

We’ve listed all 53 Sentiments in The Sims 4 that you can get in the Base Game (and Snowy Escape too!). Now, check out how Sentiments affect the autonomous behavior of your Sims!

To best illustrate and describe which stories you can tell with Sentiments we’ve asked the amazing @AnotherPlumbob to write about his experiences in The Sims 4 and how Sentiments controlled their Sims’ autonomy. Check it out!

Mary Sue and Daniel don’t have the best marriage. 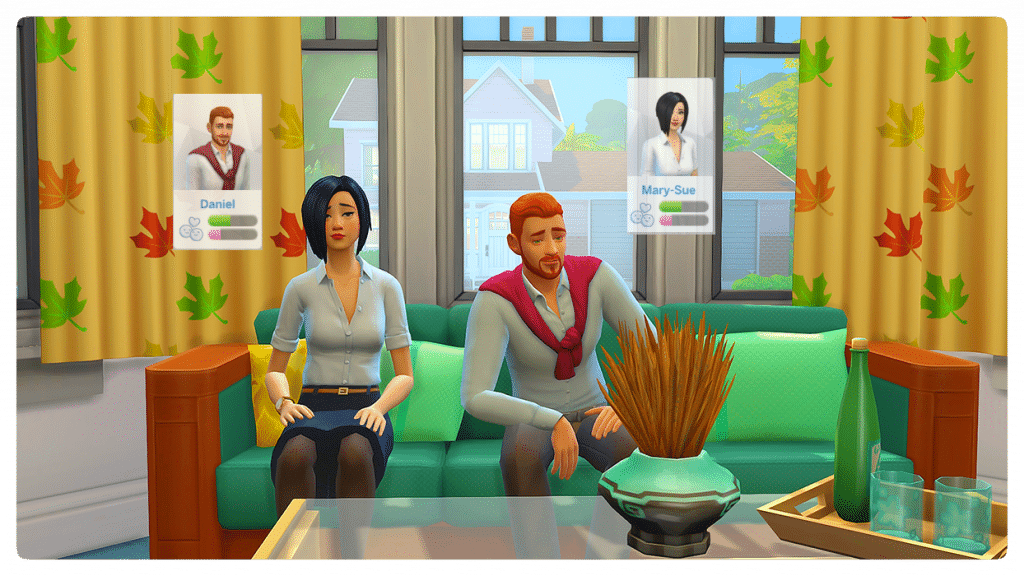 It may have something to do with the fact that Daniel is having an affair with the maid: Kaylynn. He has a close sentiment and a powerful bond with her, so he usually gets positive (playful or happy) moodlets around her. 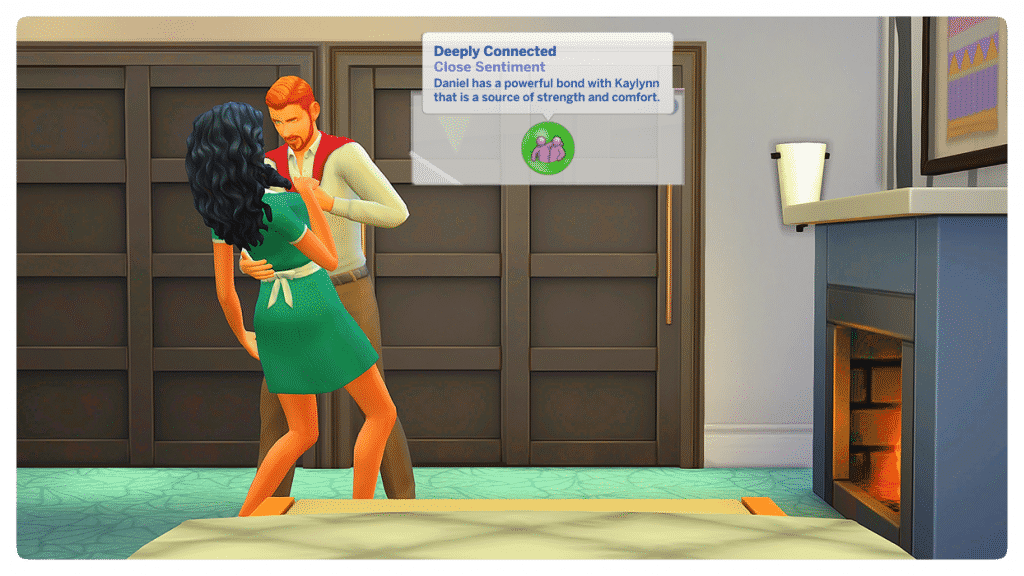 Today Mary Sue was demoted in her job and came back home early…so she found a quite unpleasant scene: Kaylynn and Daniel making out in HER bedroom! 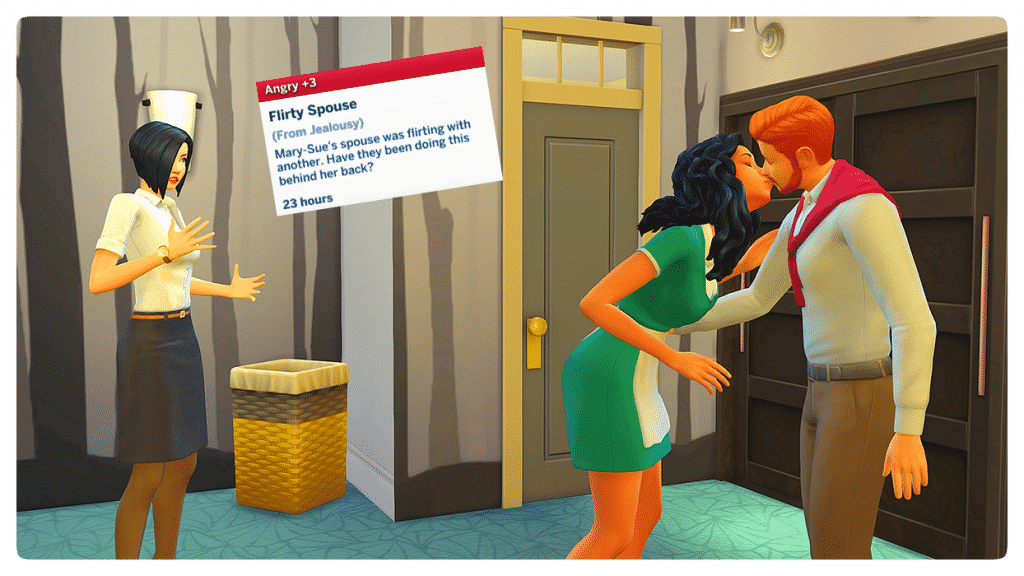 Mary Sue was not only angry (she autonomously slapped Daniel) but she also developed a FURIOUS sentiment against Daniel (in a previous playthrough this sentiment was “BITTERNESS” – I still don’t know why she got furious this time around). 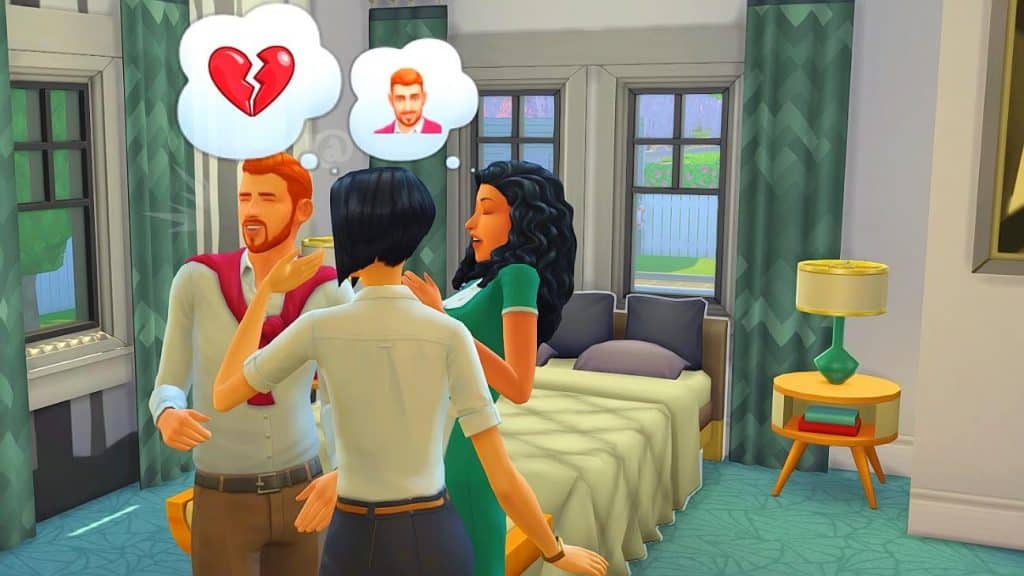 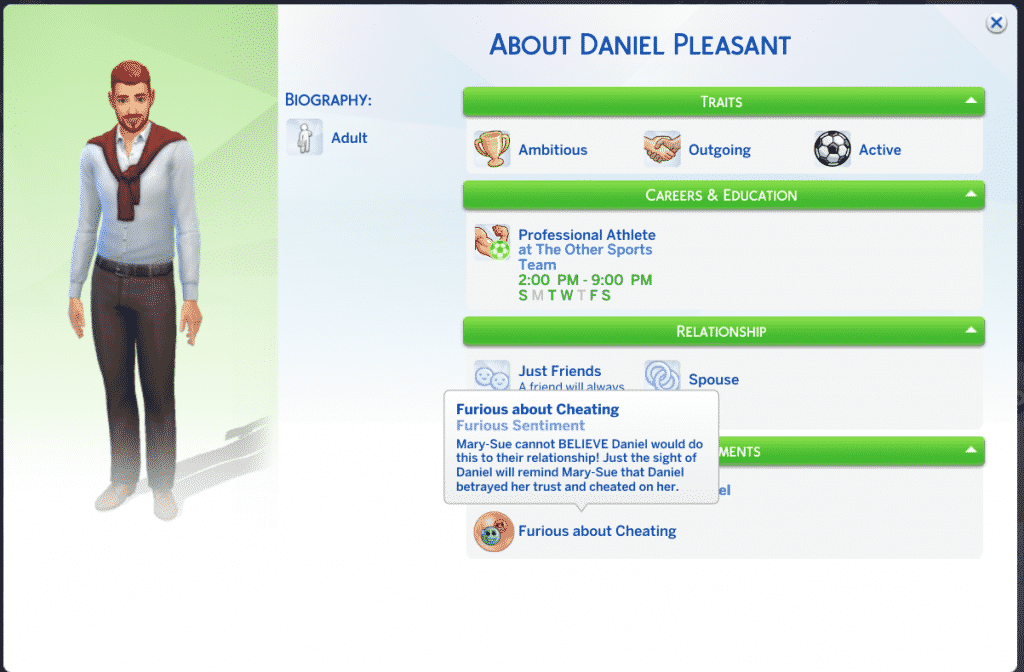 What does this mean? Mary Sue is now more prone to have negative interactions with Daniel. Over the next few hours, Mary Sue autonomously performed mean interactions on her husband and most of their conversations started off as either “unpleasant” or “awkward” encounters. Needless to say, Daniel’s attempts to flirt (autonomous too) failed. 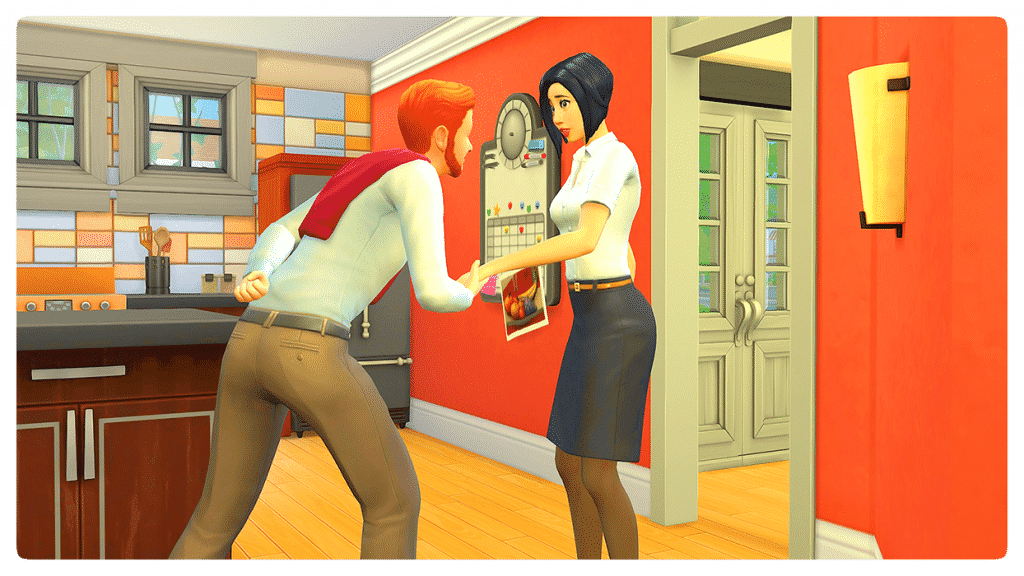 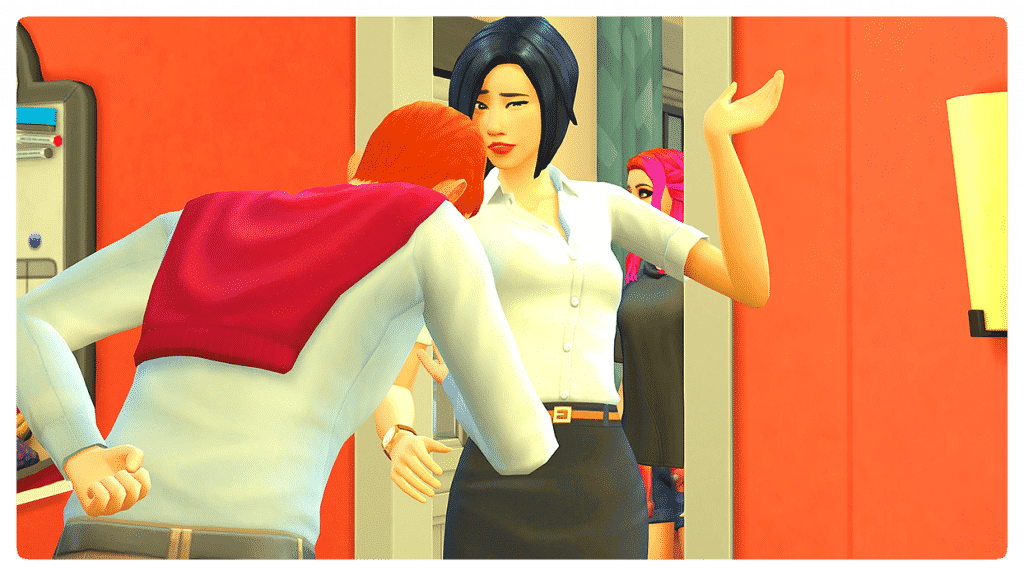 Not only that…when Mary Sue is around Daniel, she gets moodlets that are fuelled by her fury: most likely angry moodlets. 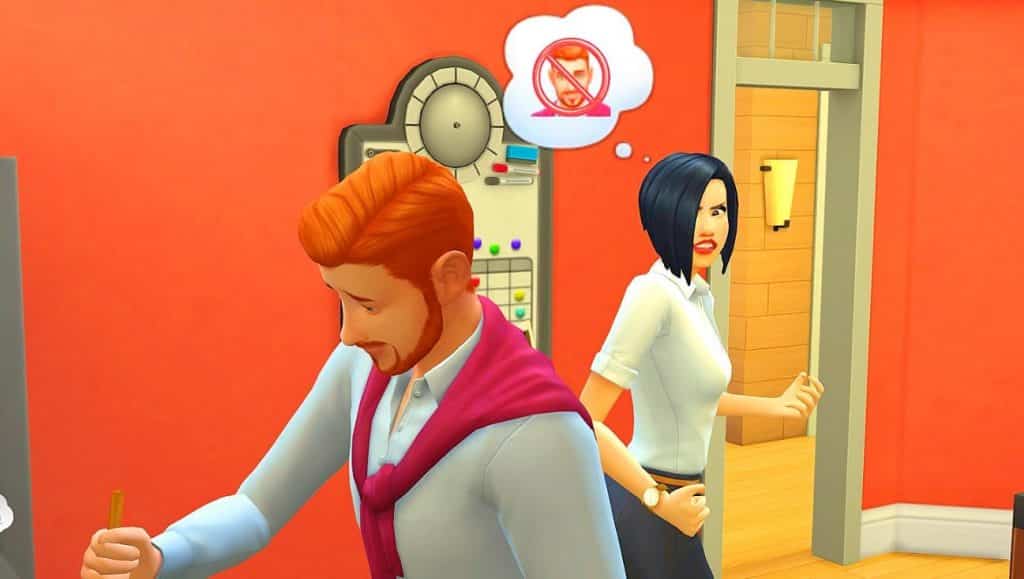 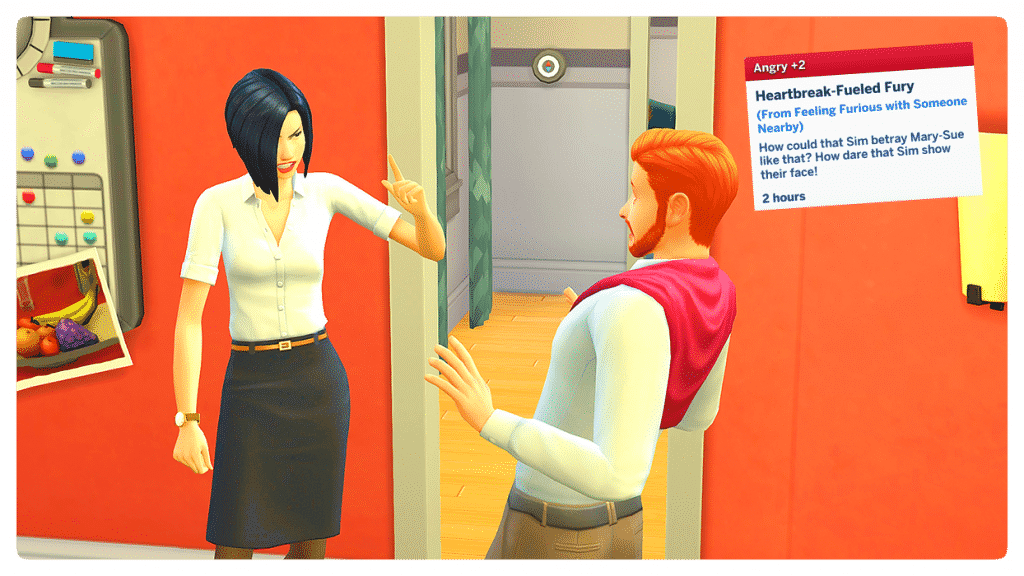 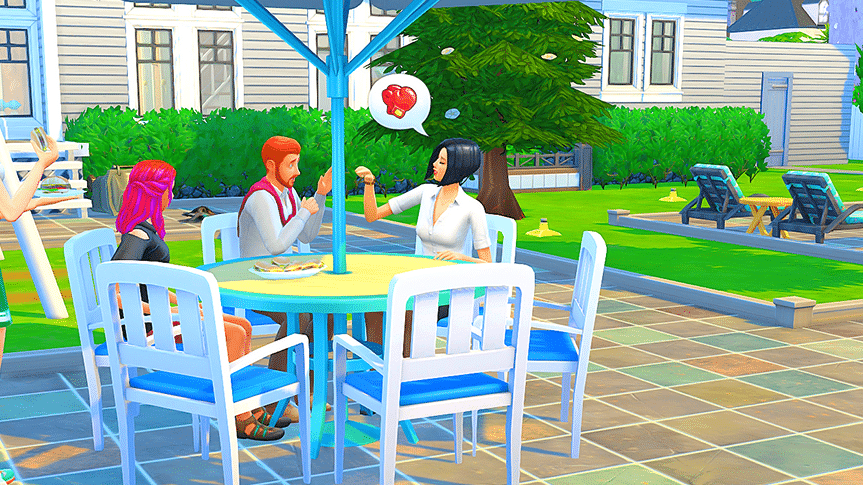 At some point, Mary Sue must have crossed a line, because Daniel got hurt with Mary Sue too. This means he got sad or angry around her because of the things she said. 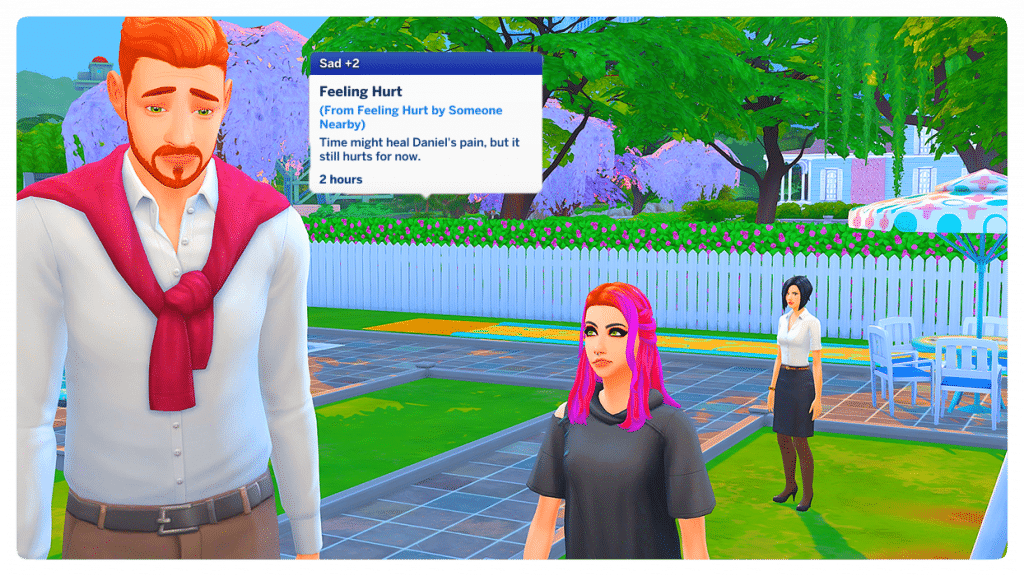 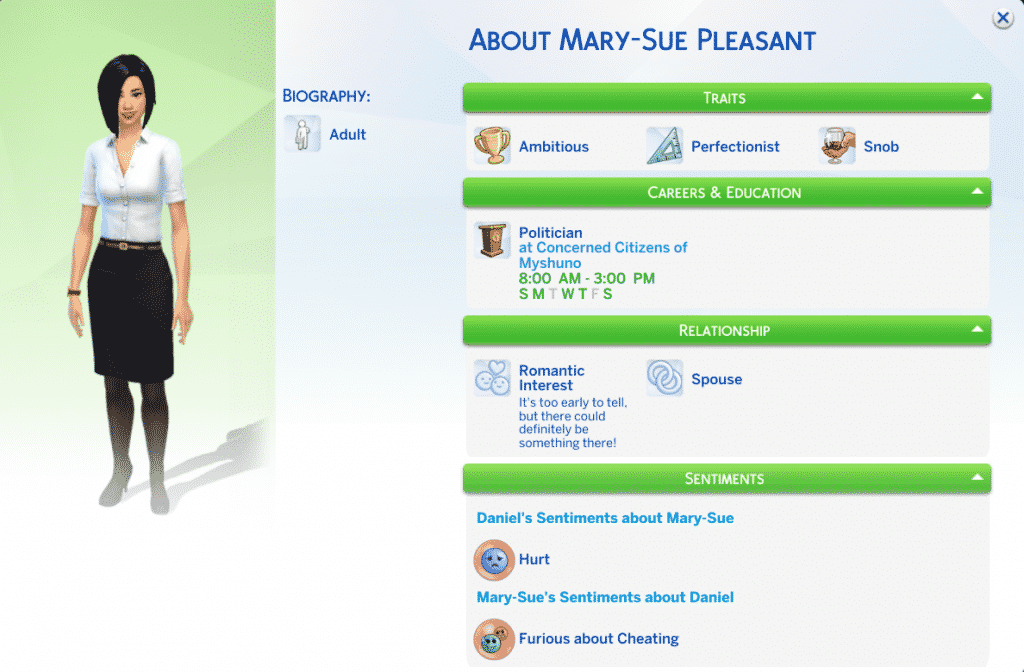 The next morning, Mary Sue’s angry moodlet about the affair had gone away (it only lasts 24 hours). But she was still furious at Daniel. Daniel’s hurt sentiments had turned to anger. But time time around Mary Sue’s fury turned into a confident moodlet: she realised it was all Daniel’s fault (duh). 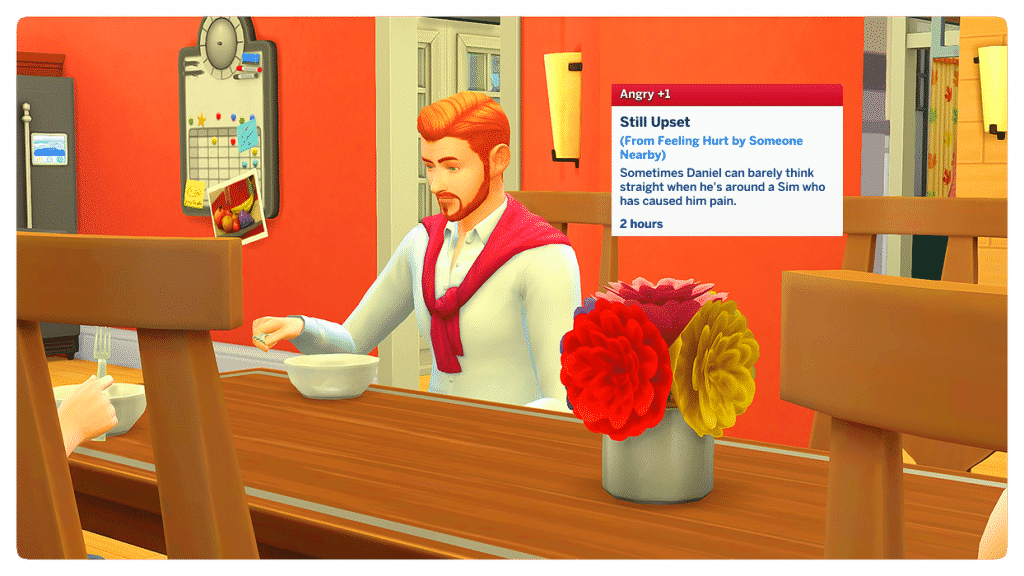 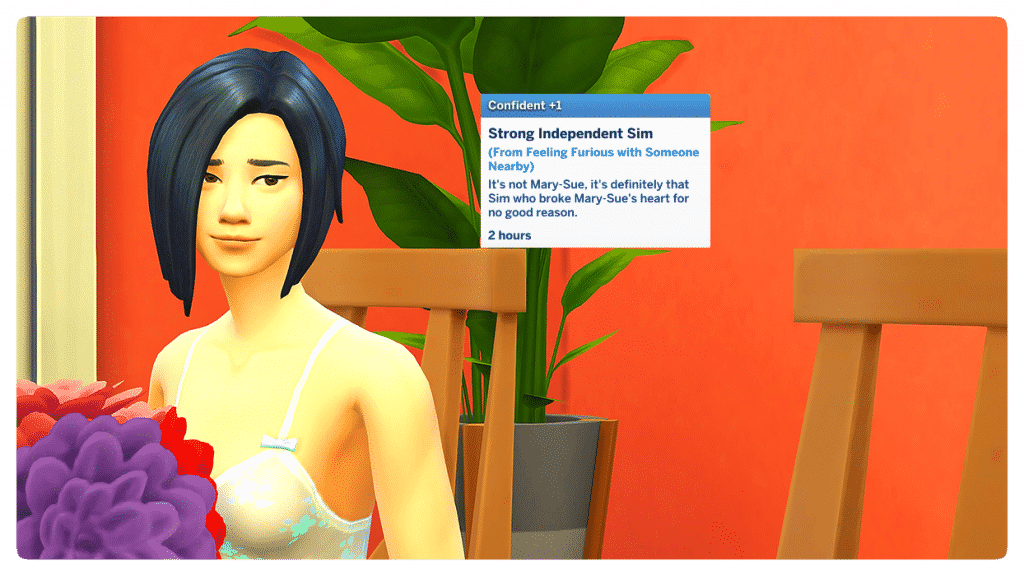 So I decided to do what had to be done: Mary Sue divorced Daniel. 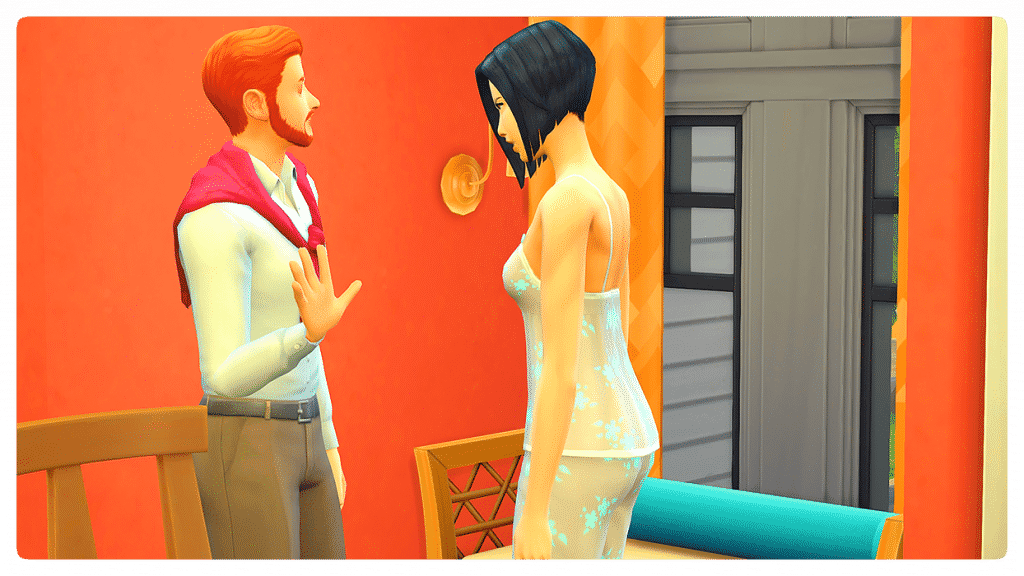 In a previous play through of this scenario, when Mary Sue was bitter and not furious, she got a further sentiment after the divorce: resentful. However, this time around she didn’t get any further sentiments. 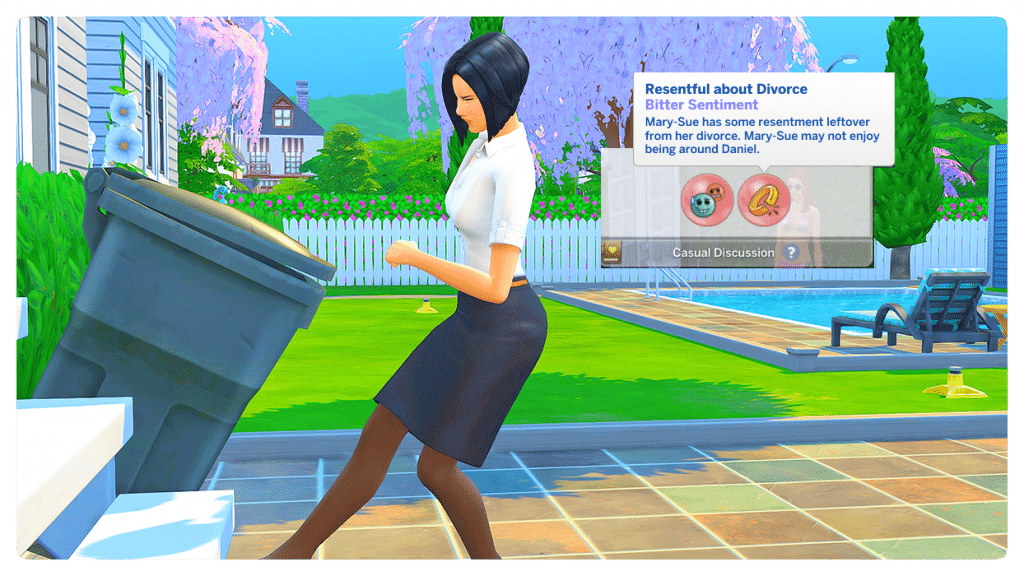 Now, Daniel was feeling pretty miserable after the divorce. Since his relationship with his daughter Lilith is not the best (they had an on-going grudge), Lilith is gloating at his father’s unhappiness. She gets a happy moodlet every time she sees him cry. 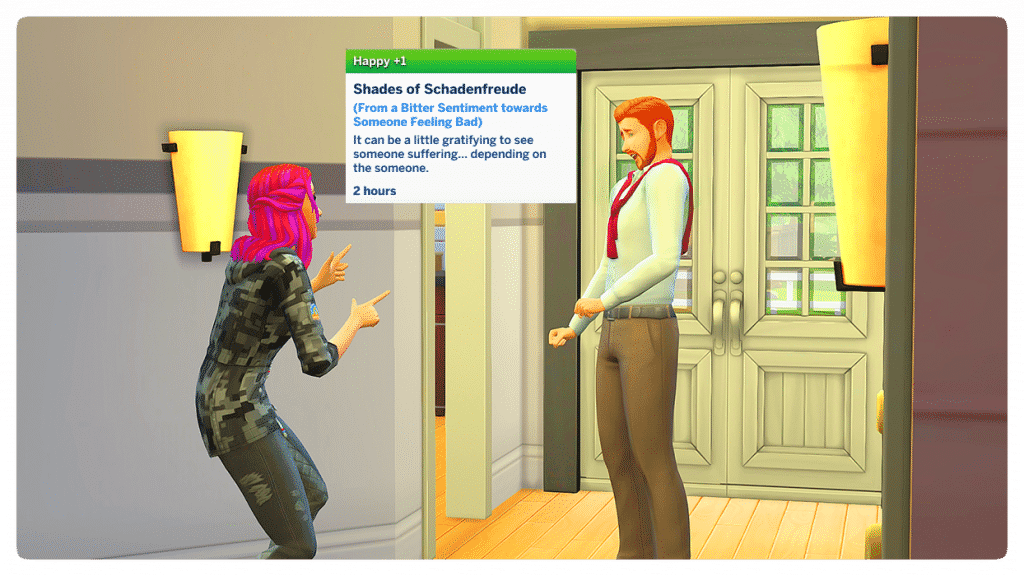 On the other hand, Angela has a deep connection with her mom, so seeing her sad makes her sad too. 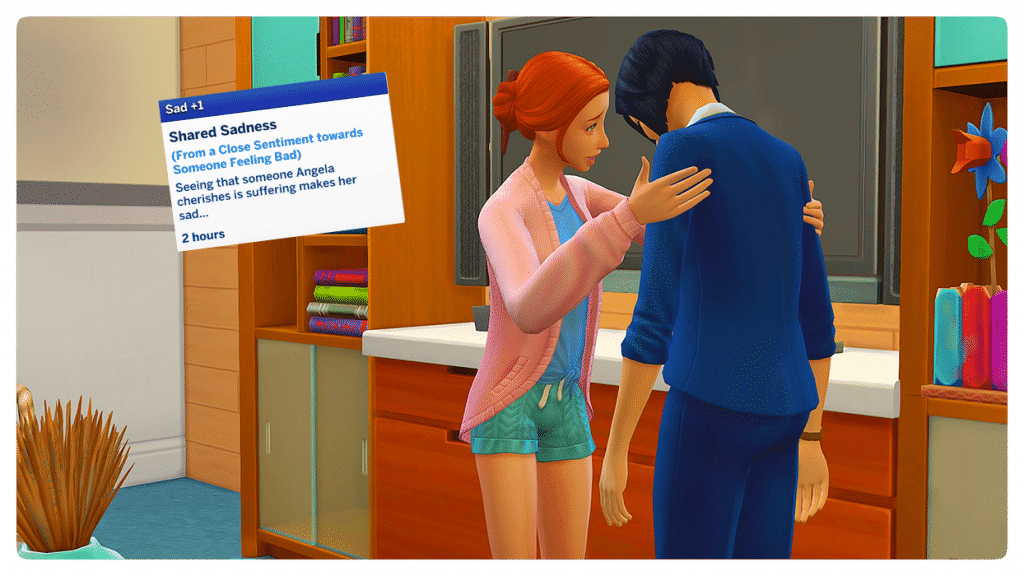 With all the drama going on at home, Angela decides to go on a date with her boyfriend Dustin. She has an enamored sentiment with him (smitten) and feels a deep connection, so she is usually happy and/or flirty around him. 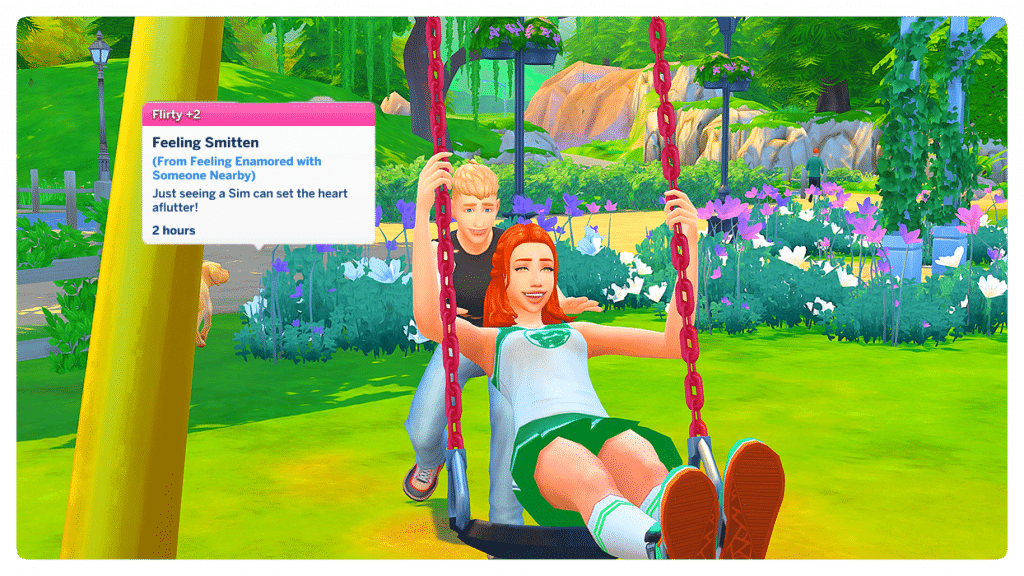 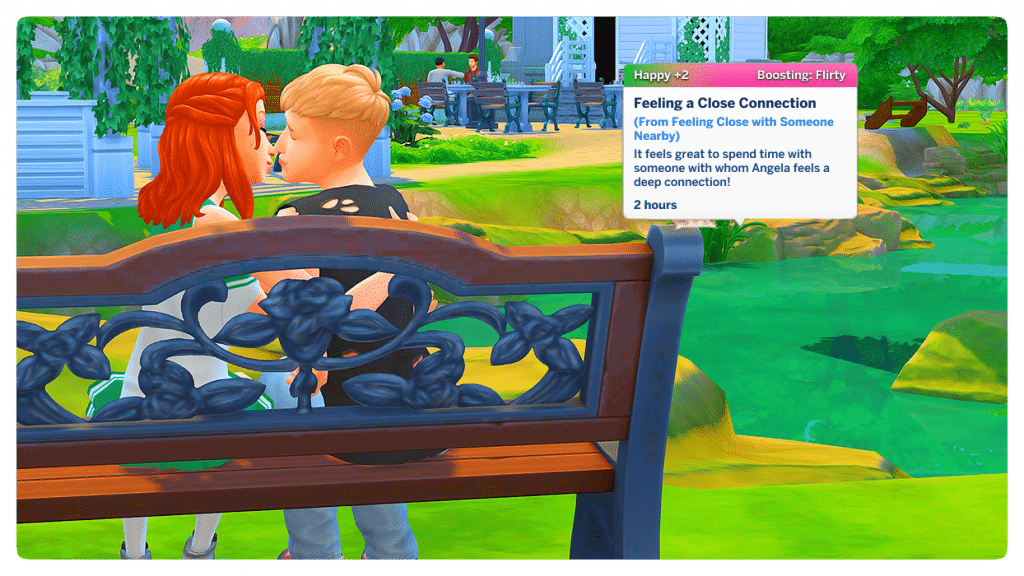 After their date, Dustin thanks her for an amazing time (he was tense at the beginning of the date, but got in a better mood after it) and he gained a “close sentiment” with Angela: closer from happy memories. 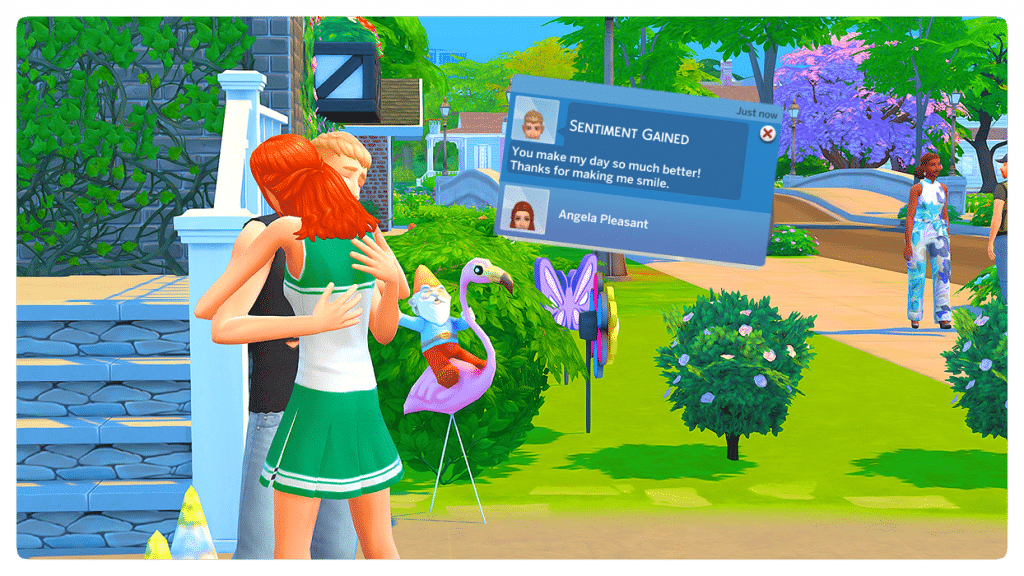 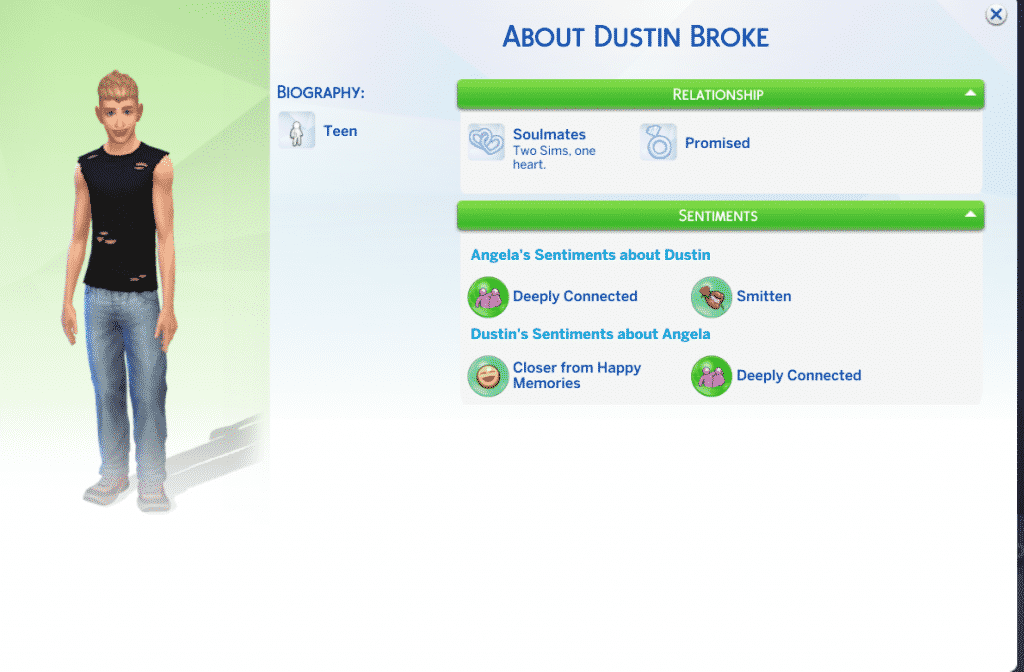