It’s time for another Day in the Life segment, featuring a family I’ve been playing since Cottage Living dropped; the Bell family!

Let’s take a look into the lives of this young couple sowing the seeds of both crops and family in Henford-on-Bagley! 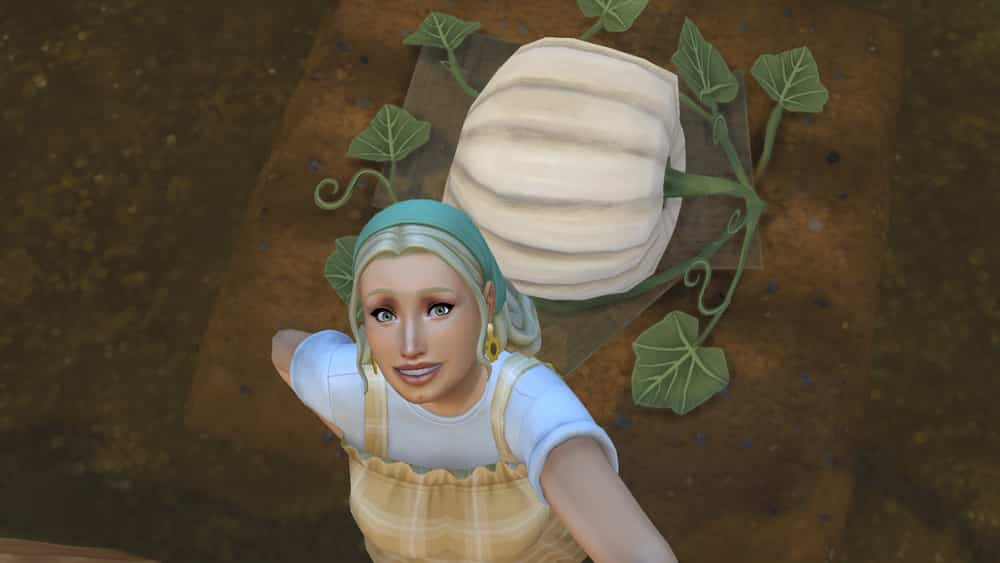 Kimberly Swanson inherited her grandmother’s Bramblewood cottage when she retired to greener pastures. Growing up in San Myshuno never suited her kindly and simple nature so she packed up and made the permanent switch to her old summer getaway at Grandma Nellie’s home in Henford-on-Bagley. She achieved a lot during her twenties; she established a tiny little farm, won some Finchwick Fair ribbons, made friends with animals and townsfolk alike and even found a husband in Michael Bell, the elusive Creature Keeper. 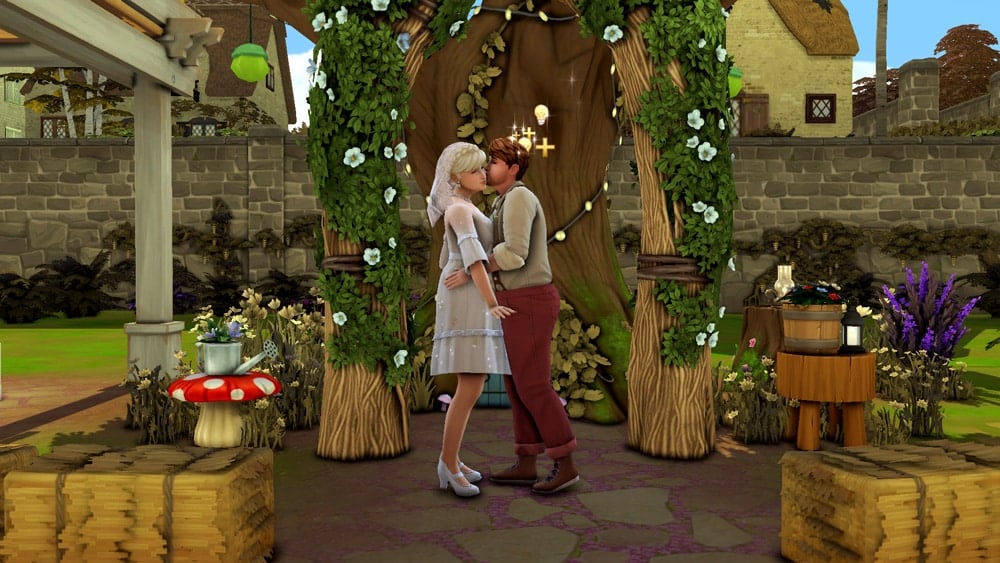 When Kim and Michael got married, they decided to expand and purchased an affordable little farm in Old New Henford to grow their livestock and their family. In usual small town fashion, it wasn’t long before Kimberly and Michael were expecting a baby. Kim and Michael share a mutual passion for hard work and living off the land but Kim’s pregnancy changed their daily routine a bit.

Bright and early at 6am, Michael got up to look after the chickens. He scattered feed, cleaned the coop, collected eggs, and spent a few minutes giving each chicken some personal attention. Then he returned to the house to help his wife prepare breakfast for them both, cooked with fresh ingredients from their farm. After breakfast, it was time for Michael to go back outside and handle the rest of the farm chores. 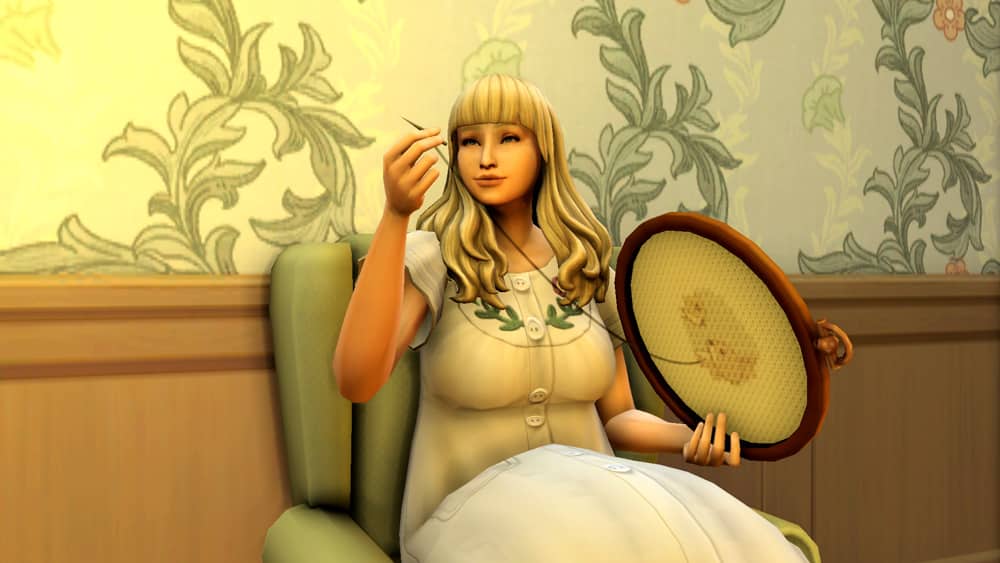 Normally, Kimberly would be outside tending to the farm with her husband but she’s taking it easy for the baby. She decides to use some of that free time to learn to cross-stitch! Cross-stitch patterns will make delightful nursery decorations and there are so many different patterns to learn. She also takes some time to knit some cozy clothes for all their animal friends to keep them nice and warm through the colder seasons ahead. She’s hoping she can learn to knit some baby onesies in time for the new arrival as well. 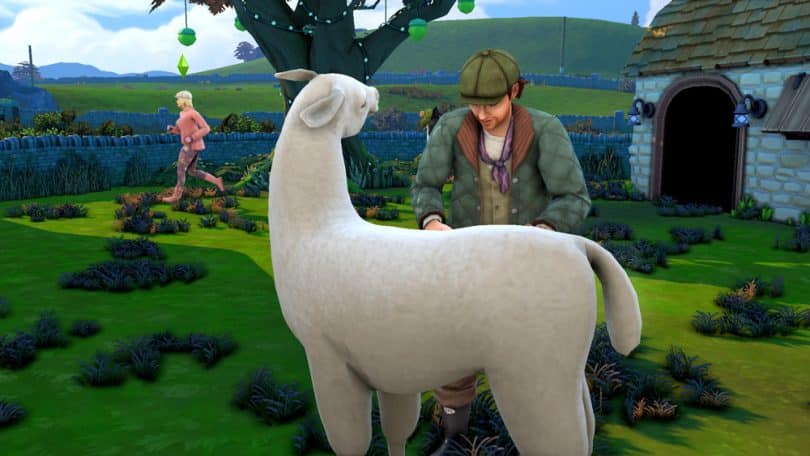 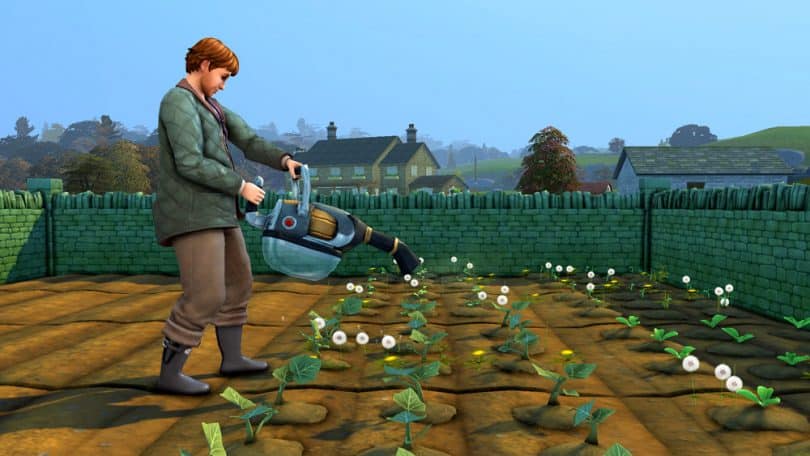 Outside, Michael has his work cut out for him without Kim’s help but he doesn’t mind. Animals are his favourite people to hang out with. He heads out to the paddock to clean the sheds, refill the feed, and tend to their cow, Butters, and their llama, Kuzco. Butters was with Kim long before Michael came into the picture and is still a bit standoffish with him but Kuzco is a new addition to the farm and took to Michael like a bee to honey. He makes sure to collect some milk and wool to stock the fridge and keep Kim’s knitting bag full. Then it’s time to tackle the crops, but luckily with the help of the wild birds and bunnies in the area, Michael doesn’t have much to do except keep the plants watered and pluck a few weeds here and there.

There’s only so much free time a farm girl can handle and Kim’s going stir-crazy cooped up in the house so she heads out to get some fresh air and bond with the animals. While she’s spending some time with Kuzco, Kim Goldbloom, the local grocer who just so happens to share Kim’s name coincidentally, shows up to offer Kim a Finchwick Favour as a congratulatory gift for the baby on the way! Kim is so grateful for the delicious meat pie that she invites Kim to stay for supper so they can all enjoy the pie together. 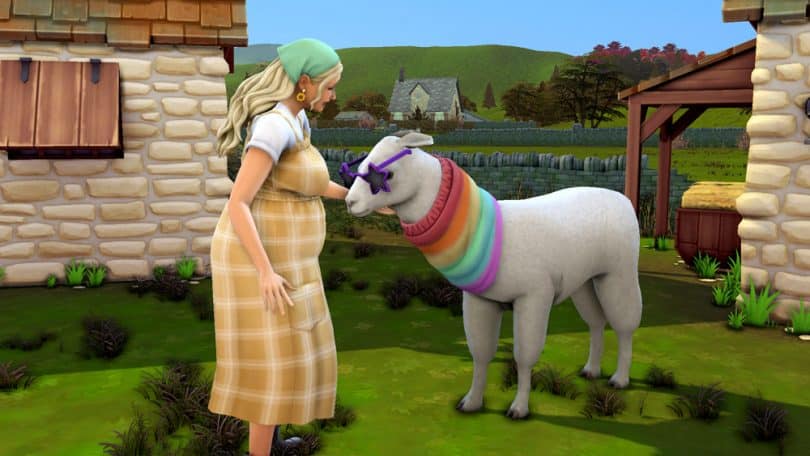 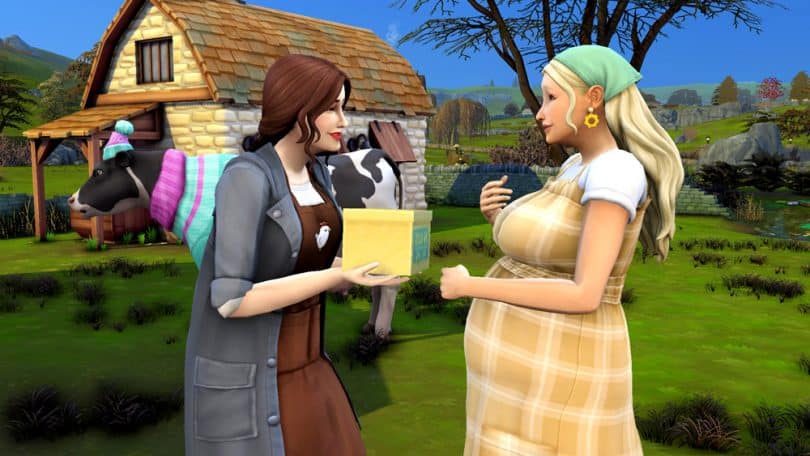 Over the years, Kim’s heard through the grapevine that Kim Goldbloom harboured some strong romantic feelings towards Michael but that Michael never reciprocated those feelings. While they talk over the dinner table, it seems like Kim Goldbloom has left those feelings in the past and just wanted to offer her congratulations to the expecting couple. What a good neighbour! People in Henford-on-Bagley are so friendly! 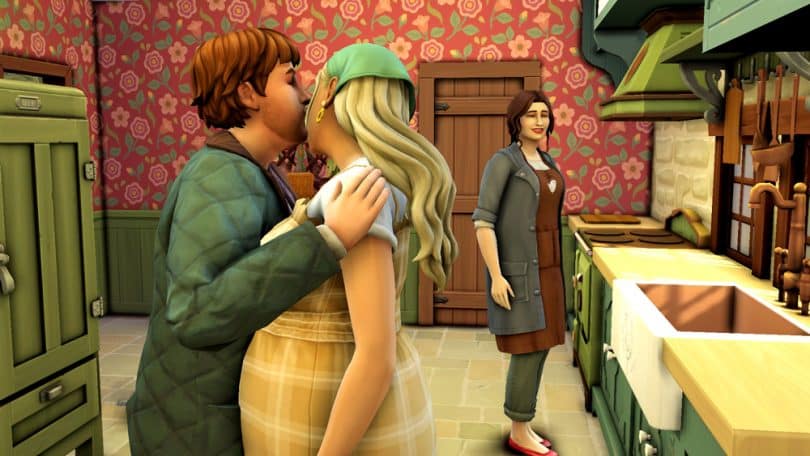 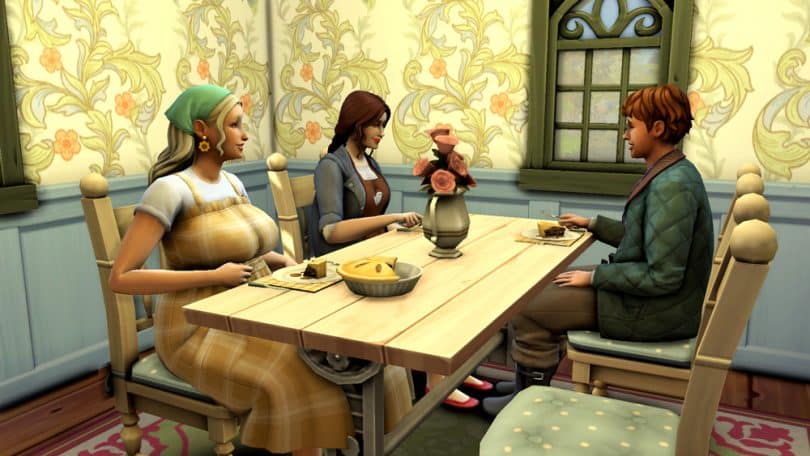 After supper, Michael goes out to check on all the animals one last time before herding everyone into their sheds and coops for the night. Being farmers, they usually turn in early but tomorrow is the Finchwick Fair. The Fair is always a big day for the Bells so it’s especially important to get a good night’s rest. As much as Kim wants to attend and see her beloved Butters take home a ribbon, she could go into labour at any moment so Michael will be taking Butters to the Fair in her place. 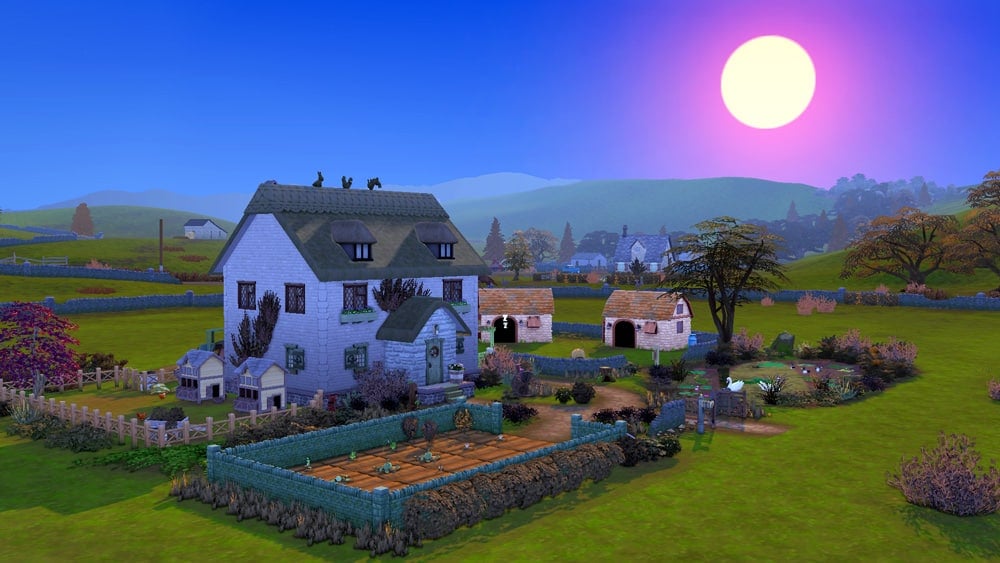 The next morning, Michael makes sure to finish all the farm chores extra early so he can prepare Butters for the Fair. He kisses his wife goodbye and he and Butters show up just as the Fair is starting. Lots of people are impressed with Butters, especially her adorable knitted outfit handmade by Kim. Michael really plays up the cute factor to tug at heartstrings and shows off just how sweet and cuddly Butters is. Meanwhile, Mayor Lavina Chopra studies the bottle of milk Michael entered with a discerning eye. 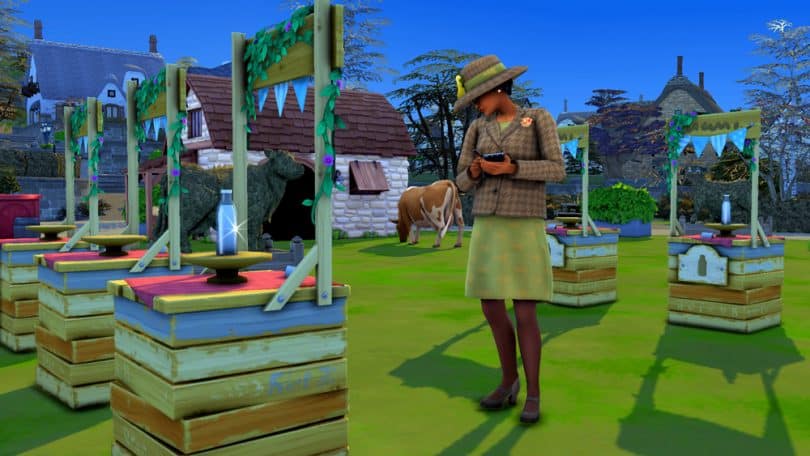 At the end of the Fair, the results are in! Butters won third place and her delicious bottle of milk won first prize! Happy with his winnings and eager to show off those ribbons to his wife, Michael and Butters head back home. It turned out that having Kim stay behind was a good idea because after getting Butters settled into her stall, Michael entered the house to find his wife in labour! 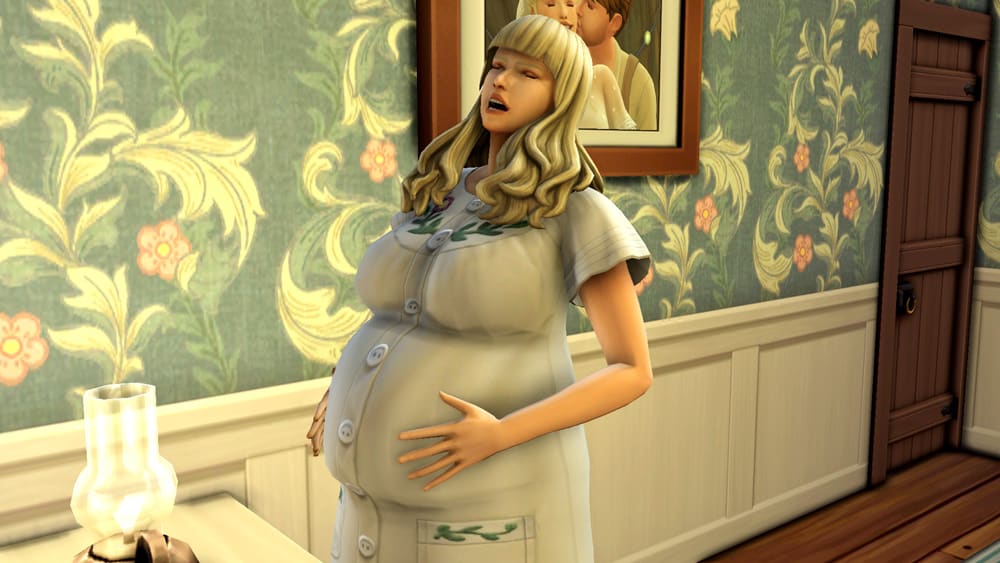 After a rather panicked trip to the hospital, Kimberly and Michael return home with a healthy baby boy named Ivan Bell. Their son is only the first of many children Kim and Michael hope to raise here on their farm. After all, it takes a lot of pairs of hands to keep a big farm like this running! 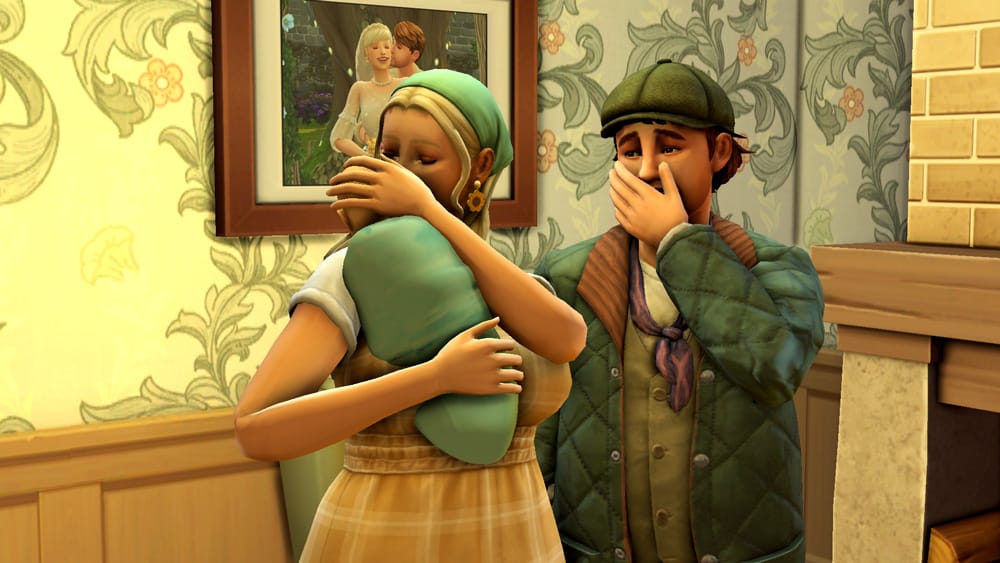 For now, they’re content with getting to know baby Ivan.