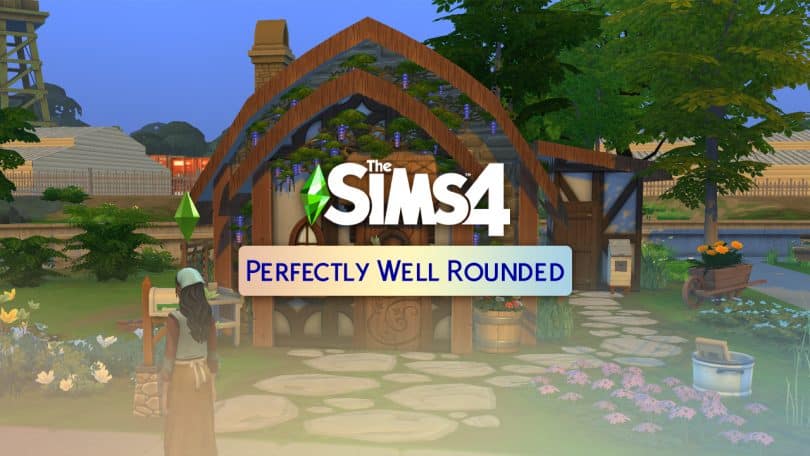 Today we said goodbye to the timed Too Many Toddler scenario and said hello to a brand new limited-time scenario called Perfectly Well Rounded! The aim of this scenario is to create a well-rounded Sim who is successful in aspirations, skills, and their social life. It’s a bit like a SuperSim Challenge for newbies. The scenario will be available to play until December 1st, 2021, so that gives you exactly 2 weeks to start this scenario if you don’t want to miss out on it.

Since I’m well-acquainted with the much longer and harder SuperSim Challenge, I thought taking this scenario on would be a breeze. Was I right? Well, here’s how I did in this scenario! 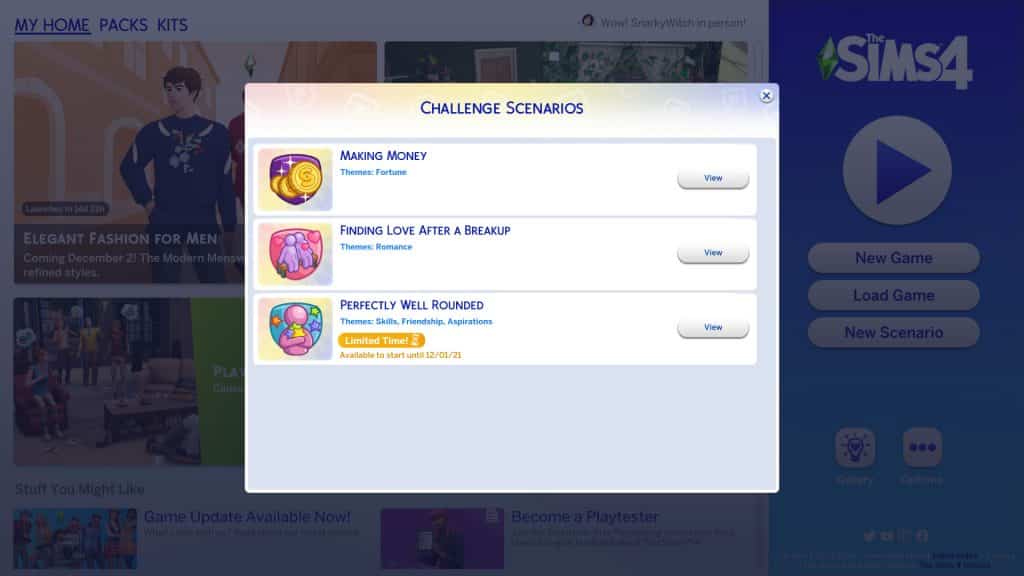 Us scenario lovers know the drill by now. To start a scenario, we click the scenario button on the Main Menu screen and select the scenario we want. There’s a new Perfectly Well-Rounded scenario available to start. It informs us that this is a limited-time scenario that will only be available until December. When we click it, we get a rundown of the scenario requirements, outcomes, and a description of the scenario. This scenario requires 1 Young Adult or older Sim and there is only 1 outcome; to have this Sim have five friends, complete an aspiration, and master 3 different major skills. 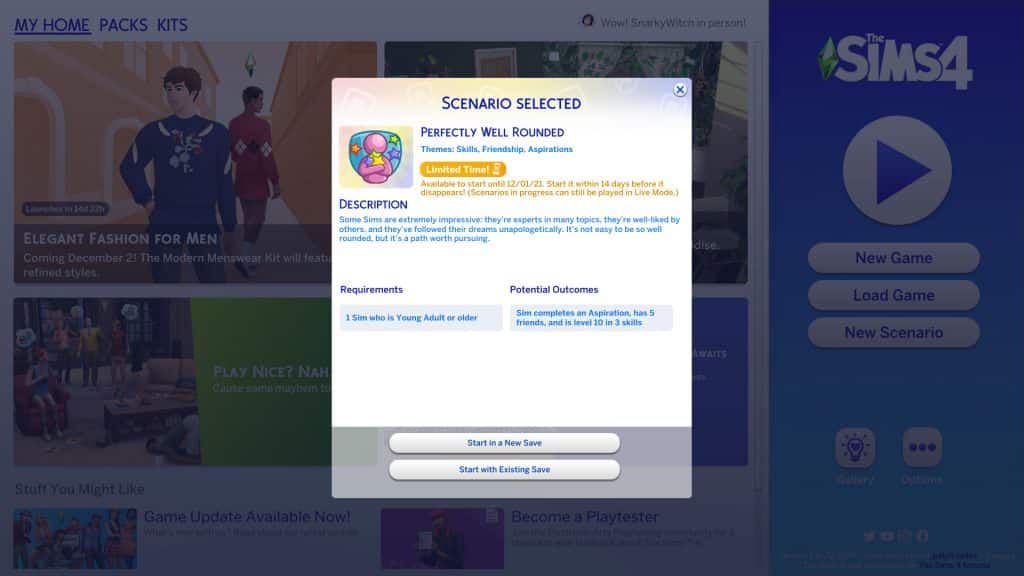 I just so happened to build a medieval microhome last night which I knew would help immensely with a scenario like this so I made my scenario Sim medieval as well. This is mostly just for fun and flavour; as you’ll see throughout the scenario, our Sim will be using a lot of distinctly not-medieval gadgets to complete this scenario. She has the Genius, Maker, and Outgoing traits and the Master Maker aspiration. You can pick whatever traits and aspiration you want for this scenario, however. 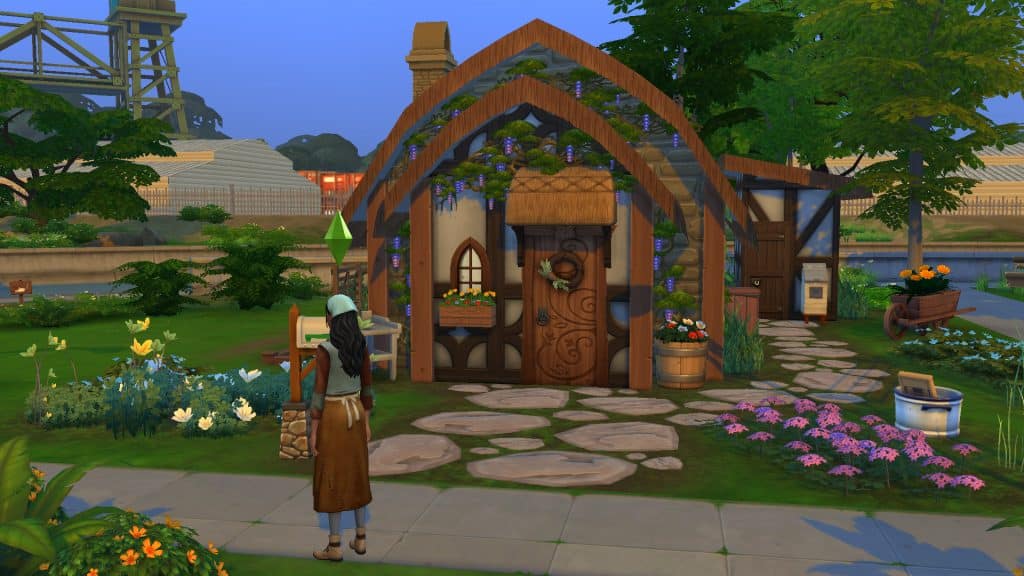 After moving her in, I plopped down a recycler, a candle-making station, and purchased some chickens and bugs for some extra cash and recycling materials. I also planted a small garden for the same reasons. I started by gathering collectibles and harvesting plants in the area to recycle and get some bits and pieces to make my candles but the Welcome Wagon interrupted me. For once, I wasn’t annoyed by this! We need five friends so the Welcome Wagon is a good thing! She invited everyone inside and wow, I forgot how powerful microhomes are. She was friends with everyone after 3 or 4 positive interactions. By the time the Welcome Wagon left, she already had five friends. Goal one complete just a couple hours into our first day! Nice! 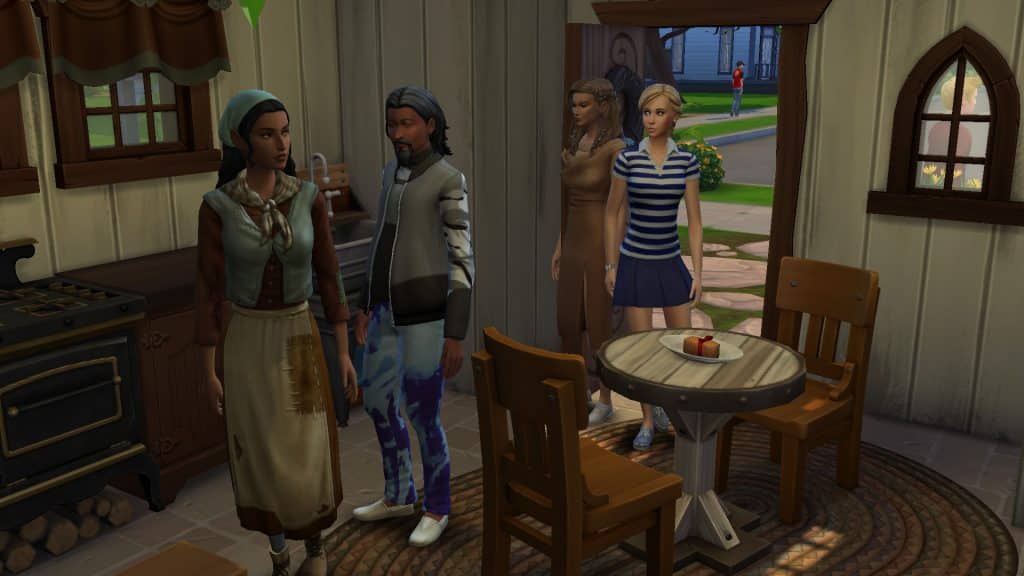 Next on the list was her Master Maker aspiration. Aspirations take the longest, especially since we get big skill boosts in microhomes. The skills will be the easiest part. I wanted to get the hard stuff out of the way so she started making candles and listing them on Plopsy. I’ve done this aspiration before with my SuperSim and it was a breeze! She started and finished the aspiration in just a couple days. However, I forgot that my SuperSim had every reward trait so her motives didn’t decay and she got additional skill boosts on top of her microhome skill boosts. This aspiration took a lot longer than I anticipated this time around without all those extra perks.

It didn’t help matters that the entire season was rife with thunderstorms. When my scenario Sim wasn’t terrified and trying to run indoors, she was getting struck by lightning. That, combined with the chickens, bees, grubs, and garden she was maintaining made things move very slowly. In hindsight, perhaps taking on so many other responsibilities was not a good idea. Or maybe it was just because it made this scenario more interesting!

The grubs, at least, paid off. She needed to harvest from them three times for her aspiration. She also needed to use the big fancy fabricator which I had no space for and just dumped on her front walkway. Just walk around it, guys. No big deal. After juggling candle making, grub care, and fabricating for a while, she eventually made it to the final tier of this aspiration. She had to master the Fabrication skill, complete five gigs as a freelance crafter, and make 20 candles. It wasn’t so much challenging as it was tedious but I’ve always liked the freelance careers so I found it to be both lucrative and fun. 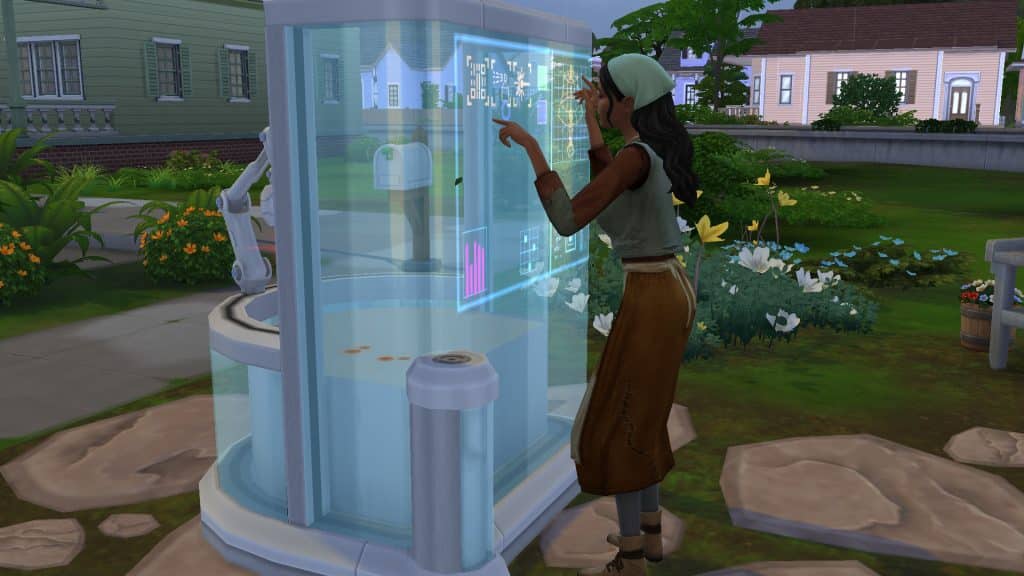 I only selected candle-related gigs for her so by the time she had completed her five gigs, she had also made 20 candles. All the candle making maxed out the Fabrication skill for her as well so that’s that aspiration out of the way. Finally! It took quite a while thanks to the bad weather and demanding critters eating up half her days.

But we were in the home stretch now! This was the easiest part. All we had to do was master two more skills to complete this scenario. I purchased an easel and smartly put it indoors so more bad weather wouldn’t dampen her progress. Painting is a very straight-forward, easy skill to master. It’s also very lucrative and it’s easy to stay inspired. Still, I took the easier route and just kept purchasing potions to replenish her needs and put her into the right emotional state. I had enough points from completing the aspiration. I might as well spend them. 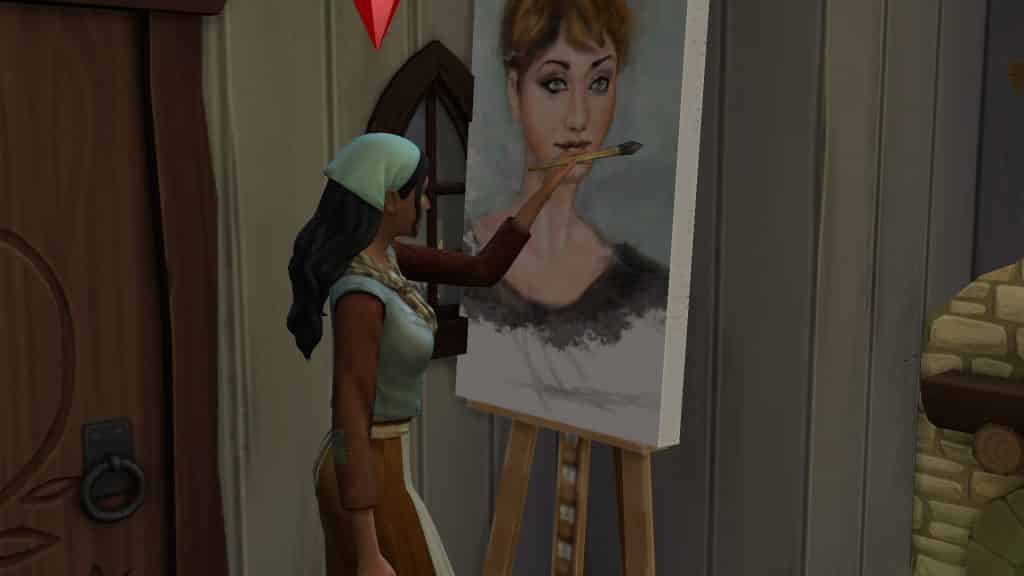 She mastered painting in a couple days, no problem. The microhome skill boost combined with being Inspired made the skill fly by easily. She made a lot of money selling her paintings on Plopsy, too. We just had one more skill left to master. Since she’s a Genius and naturally Focused a lot of the time, I decided to focus on Logic and swapped out the easel for a chess table. Once again, it flew by with hardly any effort on my part. All she had to do was play chess for hours on end. She only left the chess board to tend to the critters and her motives. I didn’t even need to use Focused potions which was good because I was low on points. She could become Focused by Pondering Moves at the chess board, plus her Genius trait made her Focused often, too. 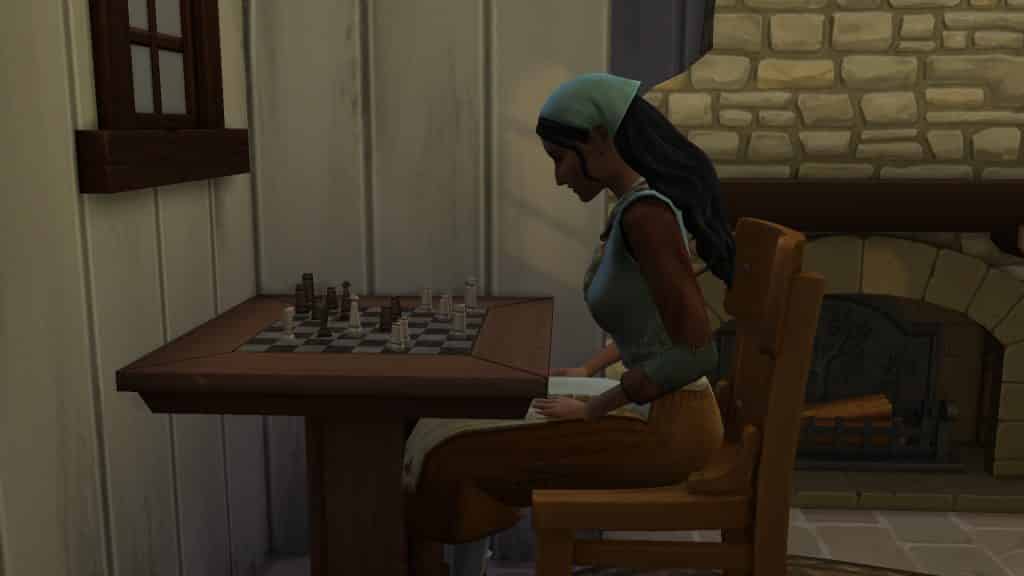 Another couple days and the Logic skill was mastered. That made five friends, a completed aspiration, and three completed major skills! I’d completed the scenario! It took me 16 days to finish this one which is longer than I expected. If I were to speed run this again, I think I’d focus more on buying traits that decrease motive decay and I wouldn’t have so many extra responsibilities. Chickens, bees, grubs, and a garden was a bit much, even if I did manage to juggle it all. 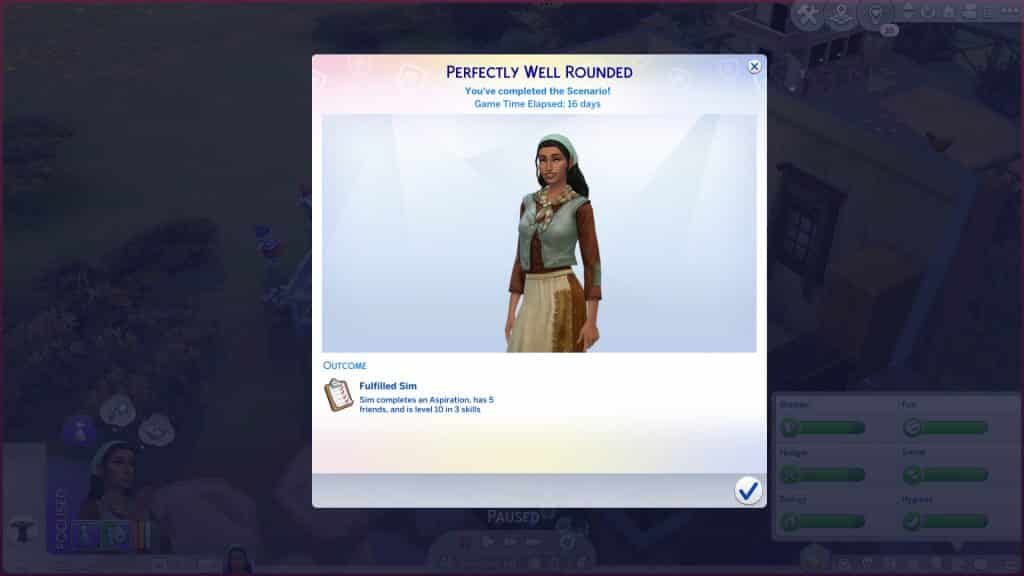 So what are our final thoughts on the Perfectly Well-Rounded Scenario? It’s a thumbs up from us! Unlike the boringly linear Too Many Toddlers scenario, there’s a lot of freedom to play this scenario almost countless different ways. You get to pick which aspiration you want to finish, who to befriend, and what skills to master. There’s also a lot of strategy involved in selecting your Sim’s traits and preferences in CAS. You could give yourself a real challenge by having a Lazy Sim who hates Fitness master the Bodybuilder aspiration. Or you could set yourself up for success by combining complimentary traits with an easy aspiration. This scenario is a grind like the Too Many Toddlers scenario but the grind was a lot more fun and had more ways to make it your own. I definitely recommend checking this one out before it ends on December 1st.

How did you complete this scenario? Did you manage to finish it faster than we did? Let us know in the comments or come chat with us on social media!