Today, I thought I’d share my playthrough of the Villainous Valentine aspiration with you. My SuperSim, Elodie Goth, was the perfect candidate for this playthrough. Not only is she a SuperSim who needs to complete every aspiration in the game, but she has a mountain of perks and reward traits from being a SuperSim and she’s currently married. Let the drama commence!

When I first selected the aspiration for her from the Deviance category, one of the goals was already complete. She had previously done the Serial Romantic aspiration back in her wild college days so she had a long list of ex-lovers. This satisfied that goal. I had two more goals to complete with her; get caught cheating and break up 10 couples. I decided to start with having her get caught cheating on her husband. 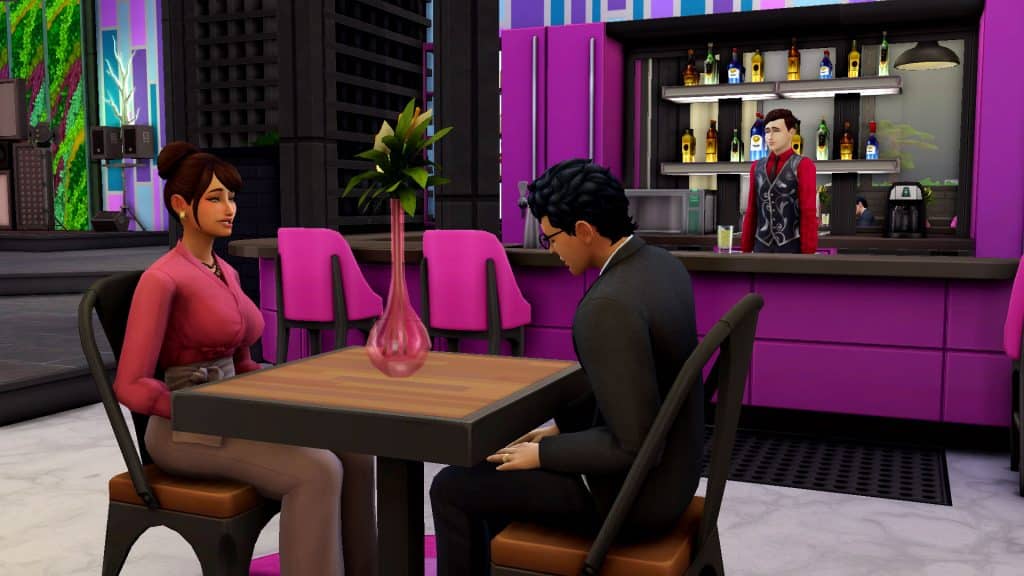 Of course, I’m quite attached to this Sim and her husband so I’m not SO mean as to break them up over this. I won’t bore you with the irrelevant details but long story short, this is all one elaborate PR stunt for her career that both her husband and her ex are in on. Elodie still happens to be good friends with one of her exes, Caleb Vatore. This ex is also her husband’s best friend and Elodie is a Global Superstar, so the three of them hatched an elaborate plan to stage a tabloid scandal for the exposure and money. 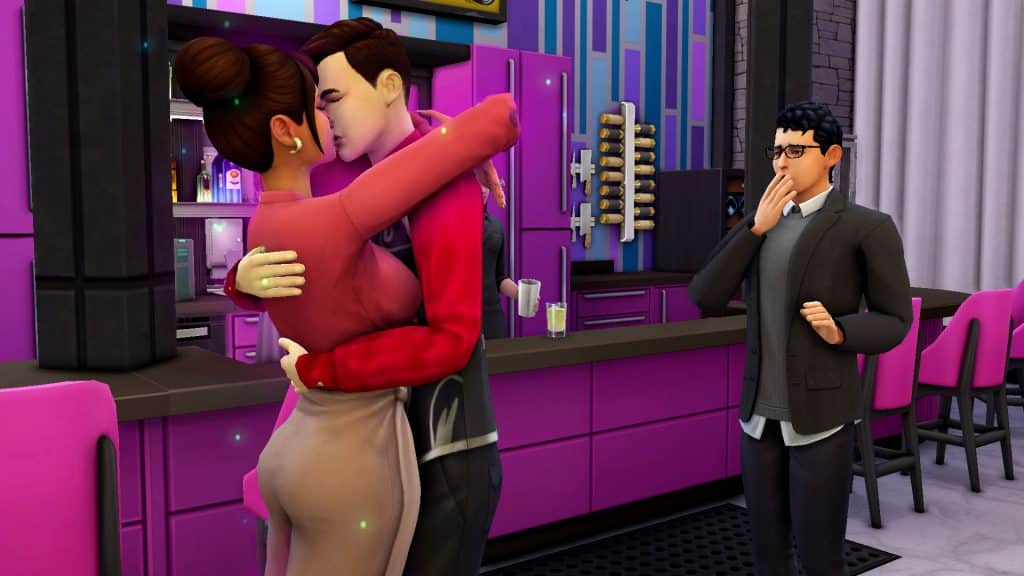 So the three of them head out to a very public place in the city and when Elodie’s husband pretend to get up to go to the bathroom, Caleb saunters over and starts flirting with Elodie, who then wraps her arms around him and plants a big kiss on his lips in front of paparazzi with cameras. Conveniently, at that exact moment, Elodie’s husband comes back and sees his wife and best friend locking lips and pretends to be shocked and horrified by the staged betrayal. The camera clicking intensifies, people start whispering, Elodie is on the front page of the news the next day and everybody has their money. No harm done. 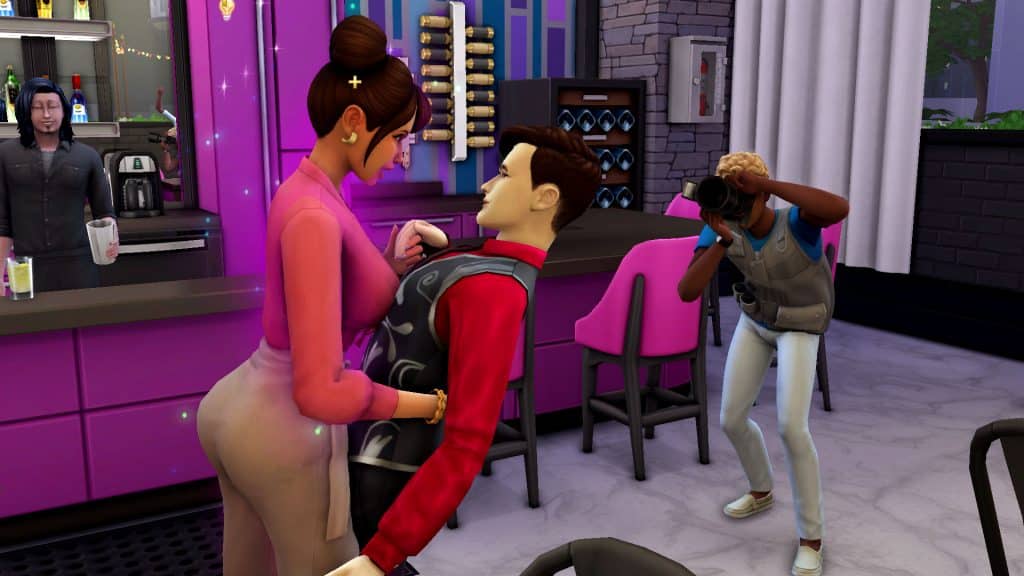 Except there was one problem. I mentioned previously that Elodie completed the Serial Romantic aspiration. This gave her the Player trait, which eliminates jealousy. Her husband didn’t mind at all that his wife was kissing another man right in front of him and had no negative reaction to the scene. While this worked perfectly for the story I’d concocted in my head, it definitely did not work to satisfy the goal for this aspiration. Not even temporarily removing her Player trait solved the issue. She appeared to still have the effects of the trait active anyway. In the end, I had to cheat this goal completed. I don’t necessarily think this is a glitch; the Player trait did work as intended but it’s definitely an oversight that might need tweaking in a future game patch. Normally, I feel guilty about cheating and avoid doing it at all costs, but in this case, it was justified. I did do the task required to complete the goal.

Anyway, with the exes and the cheating out of the way, all there was left to do was break up 10 couples. Luckily, I had a lot of unhappily married couples in this save that I was dying to break up so Elodie got to work. All of her perks and reward traits came in handy for this goal. She’s immediately good friends with every Sim she meets with a Polite Introduction, making it easy for her to influence whoever she wants. When I did the Neighbourhood Confidante aspiration with Elodie, Sims weren’t always receptive to the idea of a career change. I expected something as serious as divorcing a spouse to be even harder but strangely, it was much easier to convince Sims to end a marriage than it was to convince them to switch career paths. Every single Sim Elodie talked to was all too happy to break up with their spouse at her request. One Sim even divorced her spouse on the spot right in front of Elodie!

I ended up completing this aspiration in one Sim night with my SuperSim. She got the Twisted Heart reward trait which gives her increased Social from Mean and Mischievous interactions and helps her shrug off bad moods faster. Again, not a huge perk because her other 160+ traits combined basically do the same thing but a SuperSim still needs to collect all the traits and aspirations. Even though I did have to cheat the one goal because of a trait conflict, it was still much easier than the Neighbourhood Confidante aspiration, which took several in-game days of grinding to complete. I found that funny because Elodie only had one goal to complete for that aspiration while she had two goals to complete for this one.

Did you complete the Villainous Valentine aspiration? How did it go for you? Let us know in the comments or come chat with us on social media!