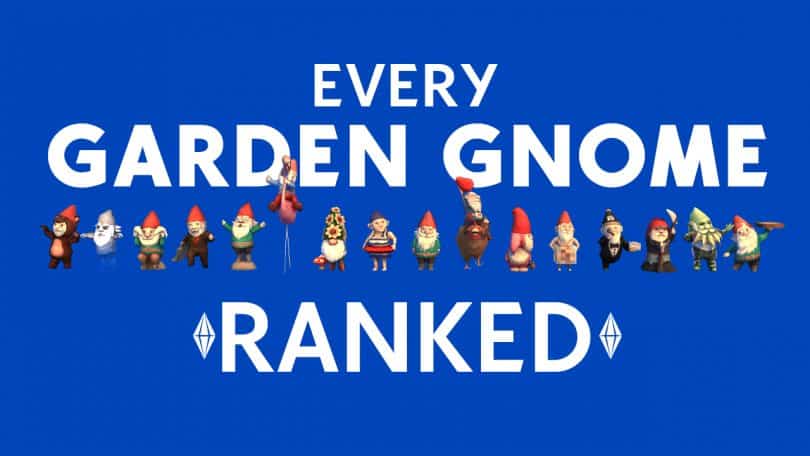 Wow, the Sims 4 Gnomes! This may be the most important article I’ve ever written for Sims Community. I am fully aware that my choices today may change the course of the universe as we know it forever. I am honoured to carry such a heavy burden for the betterment of this community. This is not a duty I take lightly; these were some long and difficult decisions I had to make but they were decisions that had to be made. Anyway, let’s rank some garden gnomes.

Coming in dead last at #16, we have the No Place Like Gnome variety of the Sims 4 gnomes. There’s not much to say about him. He’s a gnome. He hangs out in a garden. That’s about it. There’s nothing particularly interesting or exciting about him. If he was a shade of paint, he would be beige. Just look at that resigned expression on his face. He knows he’s the guy at the party no one remembers was there.

This Sims 4 Gnomes rating is slightly higher than his vanilla pal. Happy Gnome Garden Pal at least has some personality going for him. He’s in a playful sitting pose, fluffing up his luxurious beard  with a little twinkle in his eye and an “Oh, I know I’m fine,” expression. Unfortunately, he may have a little too much confidence considering he still looks exactly like his nondescript buddy, No Place Like Gnome.

We have to give this guy credit. After all, he has a very lively posture with those little arms stretched out wide for a hug. There’s no denying he has a big personality but he also kind of gives me “that weird uncle at Thanksgiving who’s always trying to get you to pull his finger” vibes. Seriously, Uncle Joe. I’m in college now and that gag stopped being funny when I was five. Maybe it’s the eyes. Those eyes… They can see into my soul and I don’t like it.

This cheery little fellow might look as nondescript as the previous Sims 4 gnomes buddies but he’s got one thing going for him that the others don’t; he’s helpful! The Upside Down Gnome dutifully holds up a wooden tray that can hold a variety of small items. Like cookies. Who doesn’t want a gnome serving them delicious cookies? It’s like having a miniature butler you don’t have to pay because he’s… a chunk of ceramic. Also, look at those adorable big blue eyes! They are much more pleasant to look at than the soulless abyss of Creepy Uncle Gnome.

Coming in at #12, Business Gnome rates higher on the list for the simple fact that he has an original outfit. We can respect a gnome in a hurry to make those simoleons even if his suit does look like it came straight out of the 80s. Maybe he’s running to the nearest Men’s Wearhouse to spend all those simoleons in that briefcase on a better suit. Make that money. Buy that suit. Live your dreams, Business Gnome.

I mean what can we say? Out of all the Sims 4 gnomes, this one is in a bear suit! How is that not awesome? And he looks like he’s doing the Thriller dance, too. Everything about the Bearly Gnome is a vibe. I too, wish I could throw away the trappings of modern life to do the Thriller dance in a bear suit somewhere deep in the woods. Looking at this gnome reminds me that I think about weird things.

Just barely making the top ten list of the Sims 4 gnomes is The Ghastly Ghostly Gnome! His eyes are just as terrifying as Creepy Uncle Gnome but at least it’s working for his vibe as a disembodied spirit. I’m getting a very strong “If it wasn’t for those darn kids” Scooby Doo energy here and I can respect that. Plus, it’s really cool that he’s semi-transparent. Is he made of glass? A hologram? The tormented soul of an actual garden gnome? The mystery is all part of the excitement!

Unlike Bland Bob at #16, this is the dude you want at your next party. Just look at him. Look at his dapper suit and bowtie. Look at his festive party hat. Look at that upbeat energy he’s serving with that obnoxious little party noise maker. And he brought cake! This positive-vibes-only gnome is more than welcome at my next big bash… in The Sims because I don’t talk to people in the real world, ew.

I gotta be real with this one. I was stumped on where to rank him. On the one hand, I’m not a Marvel fan and if I had to rank the Marvel movies, Guardians of the Galaxy would rate pretty low on an already underwhelming list. His name is also a really lame pun. On the other hand, he’s a pretty cool looking gnome! I decided to put my personal bias aside in this incredibly important, life or death mission and put him at #8. His outfit is unique, his beard is unique, he’s got a funky green skin tone and a cone shaped head instead of a traditional gnome hat, he’s expressive, and his pose looks like the cover of a cool sci-fi movie poster. He really deserves to be on the list for Sims 4 gnomes!

We stan a body positive queen and just look at this adorably chunky pool gnome! Not only is she an example of self-love and confidence in her cute little swimsuit and pool floatie but she’s also the only female gnome out of all the Sims 4 gnomes! May we humbly ask The Sims Team… why???? Just look how cute she is! That smile oozing of quiet confidence, those sweet pigtail braids and that teeny tiny adorable curl at her temple. I am LIVING. More adorable girl gnomes, please!

You know Herb. We all know Herb. Herb was that guy in the back of homeroom with the shaggy shoulder-length hair who dressed like a 70’s rock star. Herb didn’t talk much but he liked to play Wonderwall on his acoustic guitar at the picnic tables during lunch hour. Herb always had the best mushroom mash. If ya know what I mean. Yeah. That Herb. What a totally chill dude. Just like Herb the Posey Protector. Rock on, Herb.

What do you get when Merlin has a mid-century crisis and decides to take a year off to work as an Easter Bunny for kids’ parties? This guy! He makes it into the top 5 Sims 4 gnomes just for being cute in the derpiest way possible, honestly. The way he looks slightly off to the side with those innocent beady little eyes swinging his basket of eggs around just makes me feel some type of way, okay? Have I mentioned how cute those downturned ears are squished beneath his gnome hat?

You can bet your last simoleon that a garden gnome riding a lawn flamingo like its a bucking bronco is going to rank high on this Sims 4 gnomes list. I mean do I really have to explain it? It’s a GNOME! On a FLAMINGO! I rest my case, Your Honour!

Just when I thought nothing could be better than a gnome riding a flamingo, we transcend into a higher state of being with a gnome riding a chicken. This baby is also limited edition; it was an early purchase bonus for the Cottage Living expansion pack so if you have this guy, you’re one of the lucky ones! What a time to be alive!

Mr. Reaper was SO close to snagging that coveted #1 spot on this Sims 4 gnomes list. Grimmie is a Sims icon. He’s got a super cool scythe, spoopy robes, his little red gnome cap is pulled forward like a hood and did I mention his eyes glow in the dark? Well, they do. Indeed, it seemed as if no one could beat such a legend. That would be like some other townie beating Bella Goth! And yet…

Our #1 pick goes to this downright indecent Bare Essentials Gnome! Definitely the strongest out of all the Sims 4 gnomes. First of all, that’s the best pun out of every single gnome. I couldn’t even pronounce Don’t Fear The Reagnowerdcvcfrcbbfcf-huh??? Secondly, nothing, and I mean NOTHING, is more iconic to The Sims series than that block of pixelated squares protecting our Sims’ modesty every time they shower or use the bathroom. It’s been a staple of the series in every single Sims game, spinoffs included. This gnome is classic but naughty and I can’t get enough of his cheeky little wink. My only question is this: If Sims can’t see the censor blur… are they really looking at a naked gnome?

As much as my Unravel-loving heart would have loved to crown Yarny at the top of this ranking, it wouldn’t have been fair. Since he’s you know… not actually a gnome. But Yarny still deserves an honourable mention because he functions like a gnome! Yes, Yarny will make it a habit of disappearing and reappearing in random spots around your home. He’s an adventurous little yarn creature. So while he might not be a gnome in appearance, he’s a gnome in spirit.

Insulted by my rankings? Drag me in the comments and let me know what your top pick would have been in this super important, life-changing rankings list!