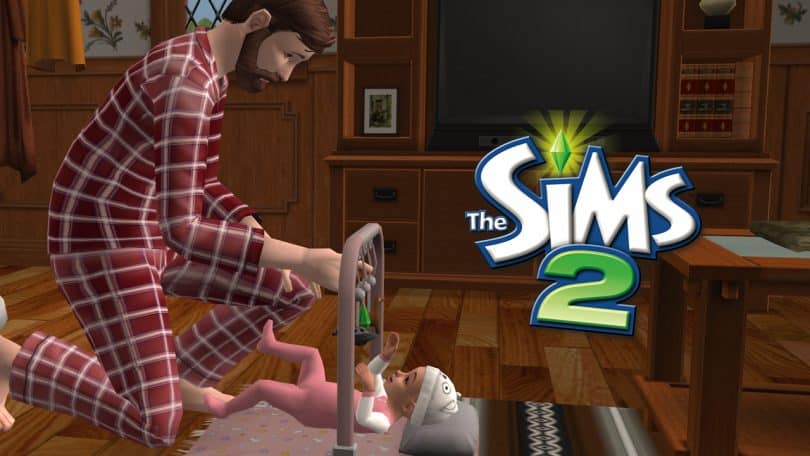 Even though my first love is The Sims 4, I sometimes find myself wanting to revisit a simpler time in The Sims’ history. Maybe it’s the nostalgia of remembering what life was like back in 2004. Maybe it’s because The Sims 2 is still a solid game that holds up remarkably well even nearly two decades later. In reality, it’s probably both those factors combined.

I decided to put away The Sims 4 for a little bit and start a legacy in The Sims 2. I’ve been having a blast playing The Sims 2 again and wanted to share all my favourite parts of it with you guys. However, The Sims 2 is also… well, a product of its time. There are a multitude of little annoyances that drive me so far up the wall, I went on a mod hunt to fix them. I’ll be sharing some of those with you as well to hopefully help other lovers of The Sims 2 improve their experience. 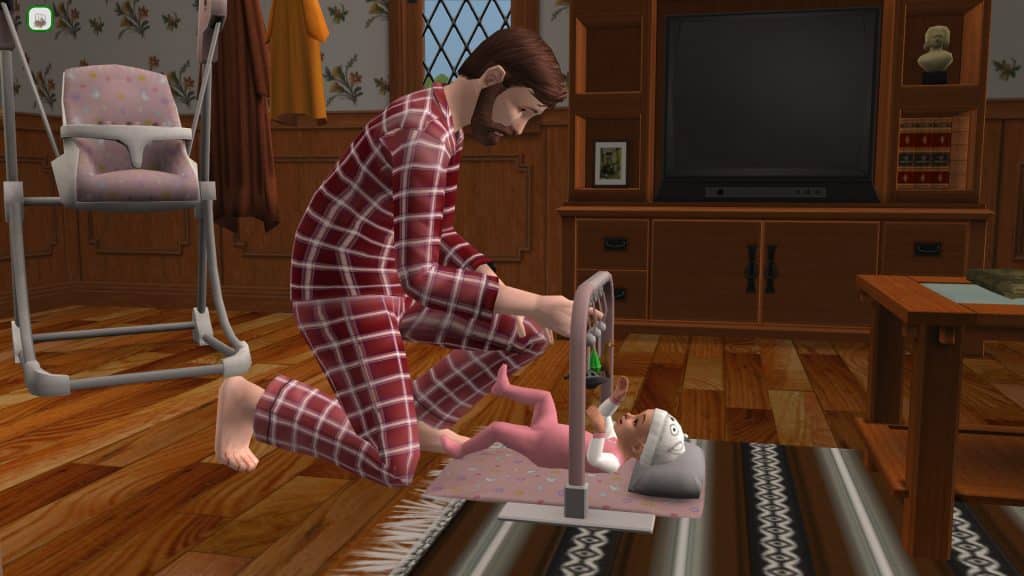 It seems downright ridiculous that I would be praising an 18-year-old life simulation game for having real babies in it while the newest installment of the series relegates babies to being objects, but here we are. Yes, babies in The Sims 2 are easily the best in the series. They have limbs, they can be carried around, be bathed in the kitchen sink, and they have plenty of objects to make this life stage fun. The Sims 2 Store had a baby bouncy swing and a baby play mat that can now be downloaded as free CC since the Store is no longer running. Adults can play with the dangly toys with the baby on the play mat, too. Babies and toddlers both also have real, proper cribs and changing tables! Whoah, so revolutionary! (cc link) 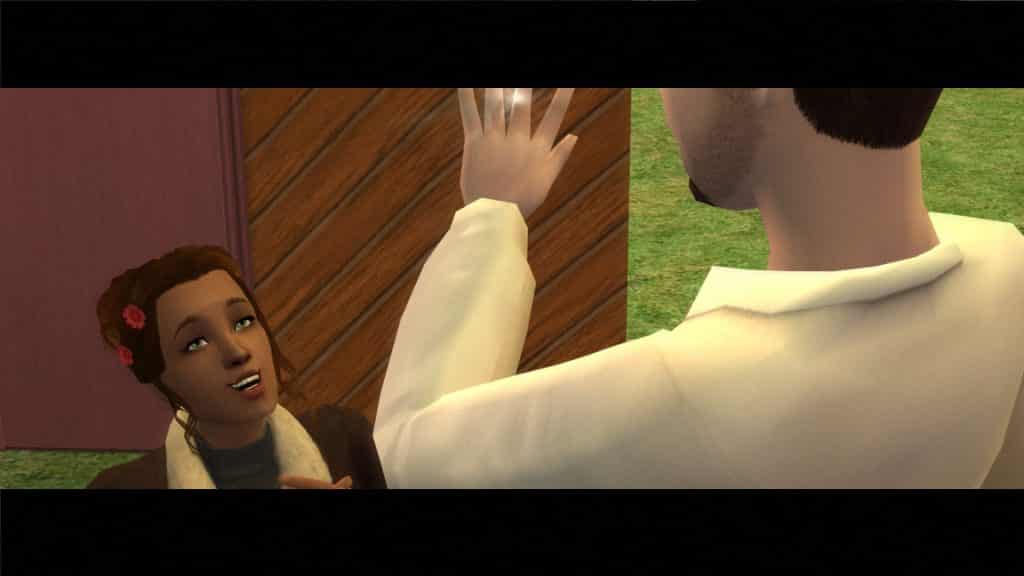 To be honest, I both love and hate this feature but the only reason I hate it is because I’m a storyteller and the events camera renders me unable to take nice shots of important moments in my Sims’ lives. However, from a general gameplay perspective, the events camera is fantastic. Whenever an important moment happens in your Sim’s life, like a first kiss, first woohoo, proposal, wedding, or the birth of a child, a cinematic cutscene plays. This makes all those important milestones feel that much more special. 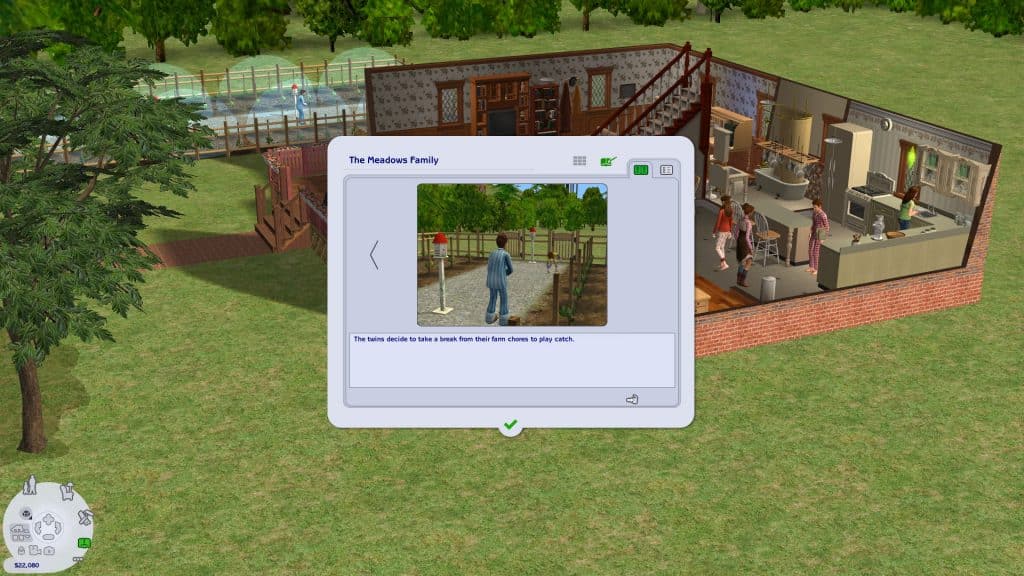 This is a feature that my little storyteller heart loves! Every household in your neighbourhood has their own family album. Take a picture with the C key and then go to the family album to organize and sort through your photos. Add pictures to the album with captions. This lets you document your Sims’ entire lives directly in the game! I am obsessed with this feature. I only wish we could write longer captions to really let my imagination run wild with storytelling. While The Sims 4 attempted to reintroduce this with the Screenshot Manager, it’s really just a shallow copy of The Sims 2’s album system and doesn’t have the same kind of functionality. 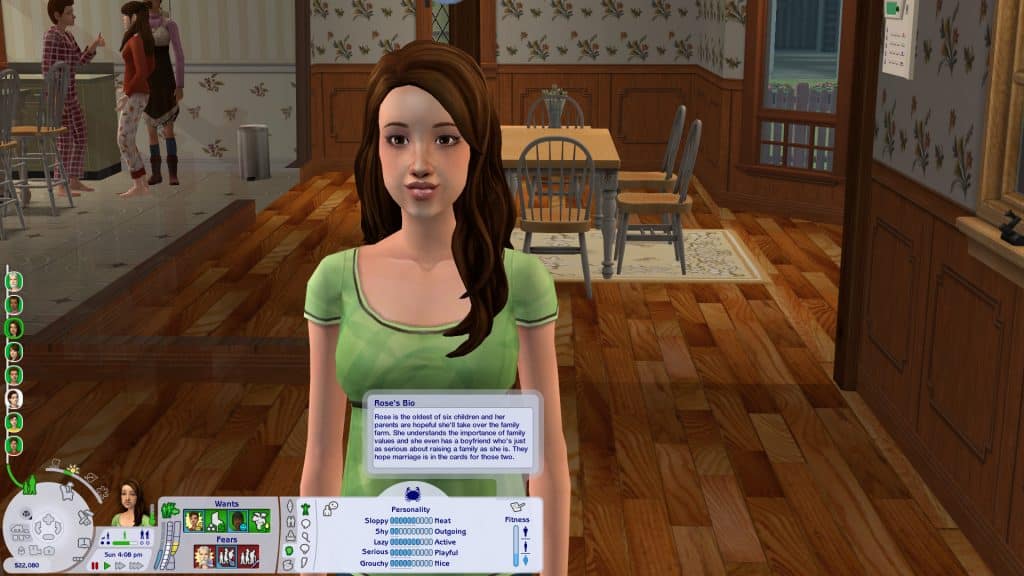 The Sims 1, 2, 3, and 4 all have family bios you can write in the household descriptions which is great, but The Sims 4 seems to have forgotten about individual bios. This was something I really enjoyed in previous games, including The Sims 2 so I felt its absence strongly in The Sims 4. Having the ability to write both a household description and a Sim description allows players to write more nuanced stories for their Sims. Instead of having to lump each household member together in a vague family bio, you can summarize everything in the family bio and then go into more detail with each individual Sim. 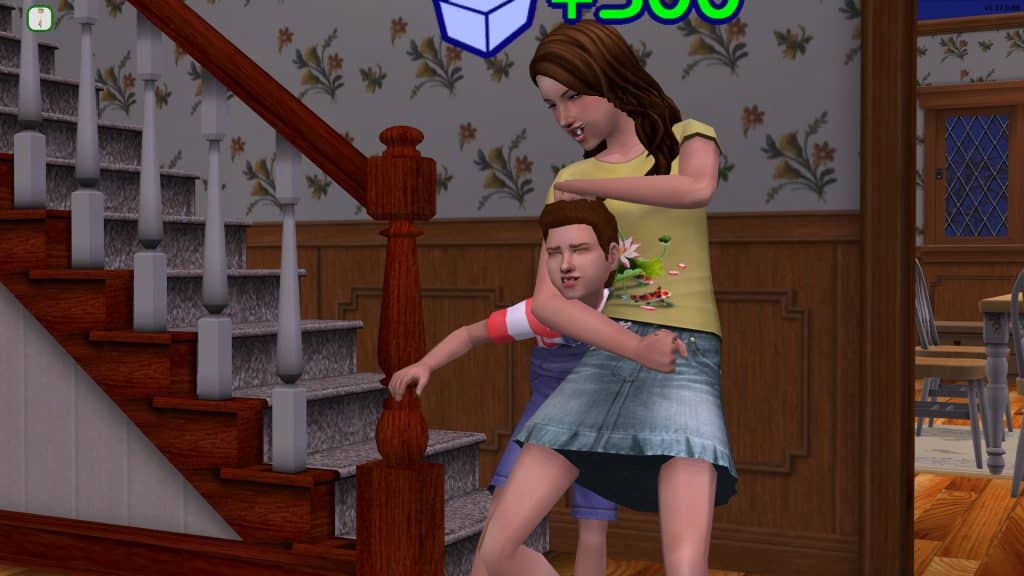 When I went back to The Sims 2 from The Sims 4, I felt like there wasn’t as much gameplay in terms of number of things to do but I did notice that there was a lot more detail in what was there. That kind of detail counts for a lot because in spite of not having as many things to do, I was still completely enchanted with this game and drawn into their world. Kids jumping on the bed, sliding down banisters, playing make-believe in the bathtub, teens giving their younger siblings noogies, I could go on and on. All of these little things that the Sims do plays a large part in the emotional connection you make with them. That’s something that I think later Sims games have really lost sight of. 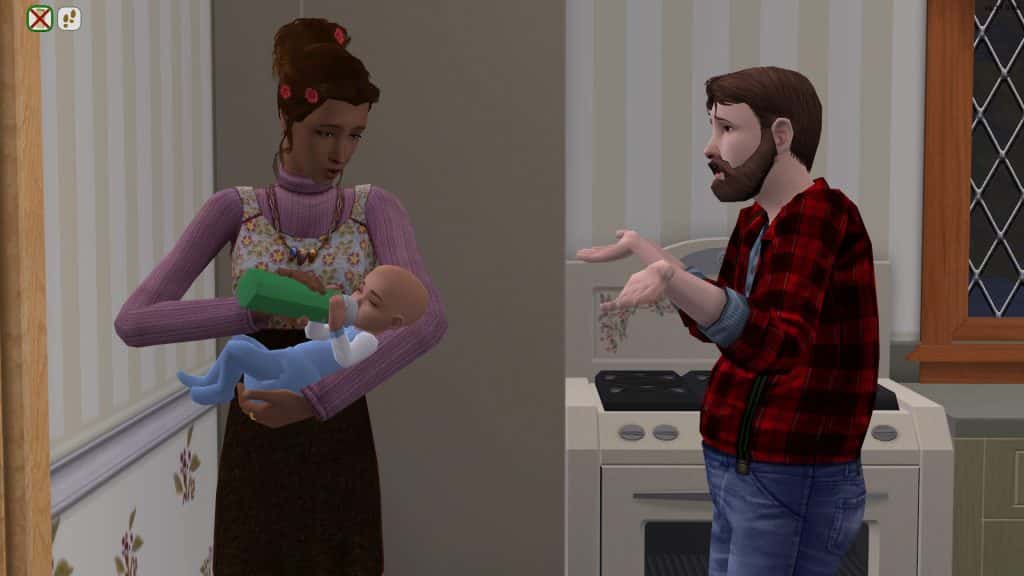 I downloaded a mod to stop this nonsense SO fast. What sane human being proceeds to chuck an empty baby bottle on the floor after feeding their infant? I’m a family player, too, so my Sims’ houses would just be littered with these smelly baby bottles all over the floor. It may be a small thing to nitpick at, but if you’ve experienced this yourself, you’ll know what a massive annoyance it can be. I have a mod that causes the bottles to self-destruct after a few moments of being on the floor. (mod link)

Route Failures on the Stairs 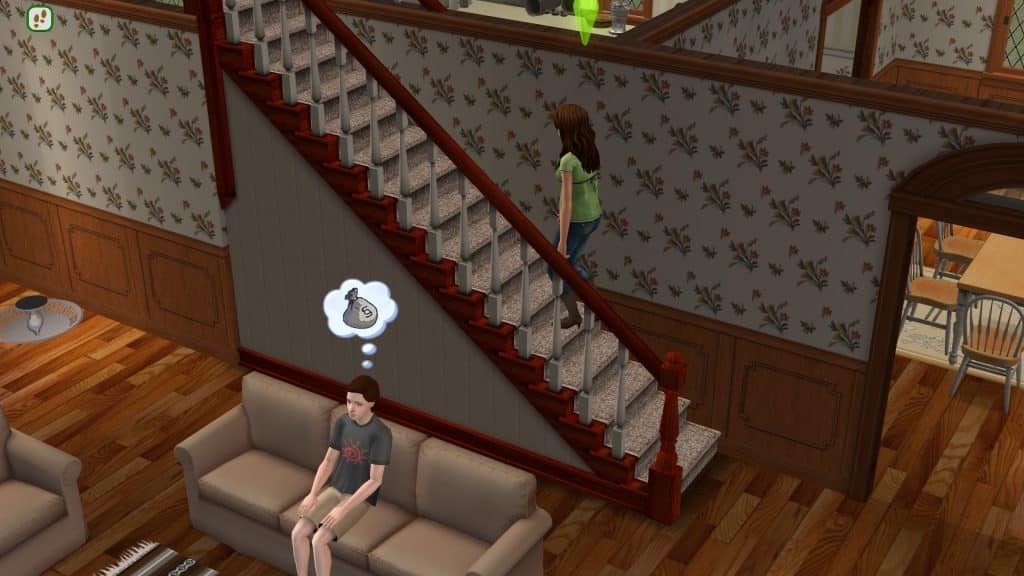 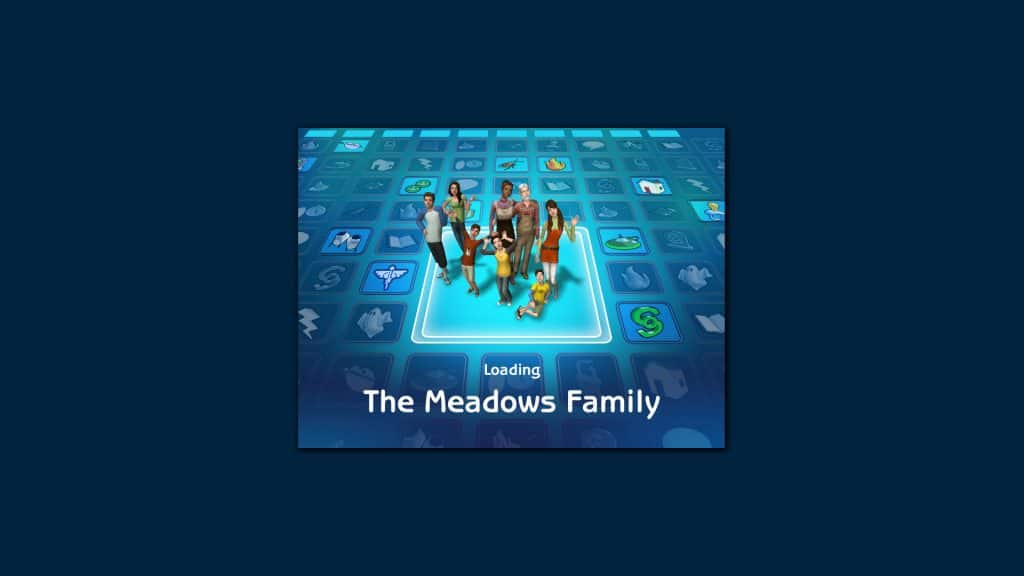 Some people might disagree with me on this one and I get it; it comes down to realism versus convenience. In The Sims 2, you can’t just travel to anyone’s house that you want. In fact, you can’t go to anyone’s house at all as a visitor. If there’s another Sim in town you want your Sims to meet, you have to hope they live close enough to you to show up during the welcome wagon or be lucky enough to run into them at random somewhere on a community lot. I’ll admit this is a more realistic way of meeting new people; you wouldn’t be likely to just knock on the door of a random house and be like “Hi stranger! Wanna be friends?” You’re far more likely to meet a new neighbour when you first move in or run into someone while out somewhere. Still, I kind of prefer the convenience of just being able to do what I want when it comes to this. 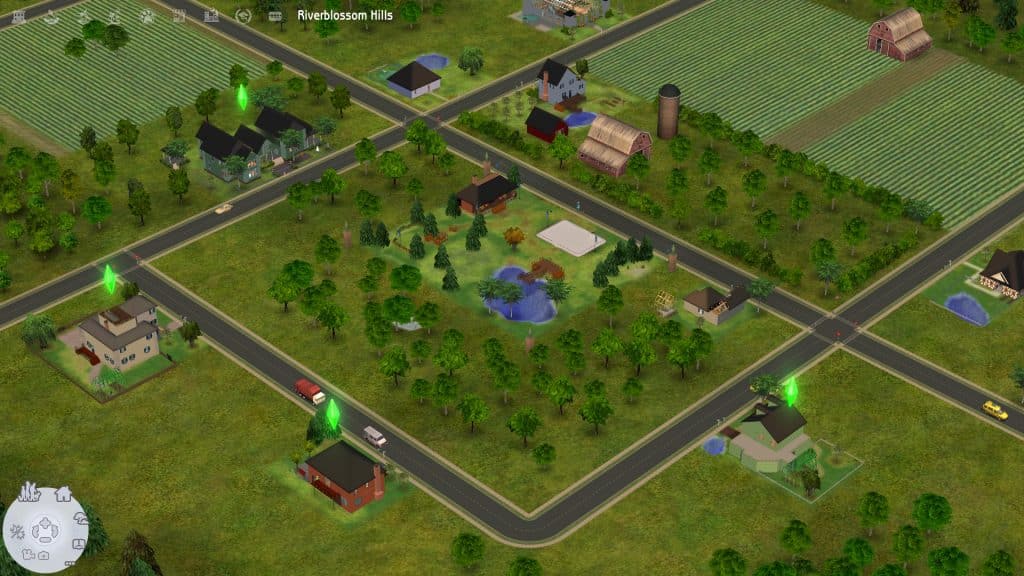 The Sims 2 and The Sims 4 both have loading screens in between lots but what really sets these games apart in this area is The Sims 4 also has neighbourhood space around the lot that loads. The Sims 2 does not. My Sims in The Sims 4 can take a jog around the neighbourhood, fish in the pond behind their house, or enjoy an afternoon playing at the nearby playground, all from their home lot. This makes the lots feel more open and I find myself forgetting that it’s a closed world since there is ample space to explore around every lot. In The Sims 2, the only thing you can access apart from the confines of your home lot is the sidewalk and the road directly in front of the lot. This creates a very confined, closed-in feeling and I’m constantly reminded that I’m trapped on this square of land unless I want to go through another load screen. 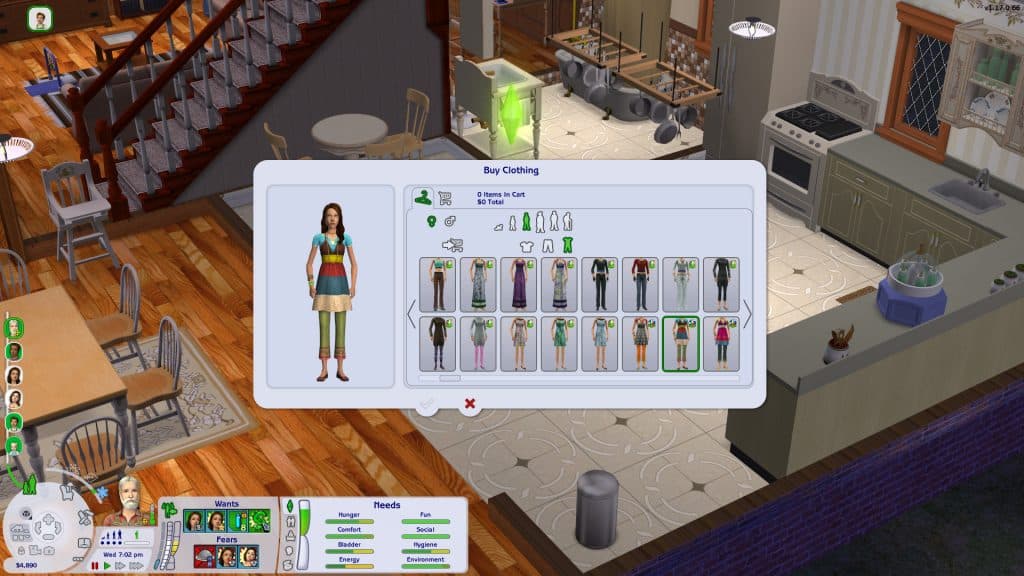 This may be another instance of realism versus convenience and I guess I prefer convenience. I hated having to go to the store to buy new clothes for my Sims so much that I downloaded a modded coat rack that lets me “purchase” the entire clothing catalogue for free. I’m very big on customizing my Sims exactly to my liking and The Sims 2 makes it very difficult to do that. Without mods, I can’t dress my Sim how I want if they aren’t wealthy enough to afford the clothes. I can’t easily pop into CAS whenever I want to make all of my changes at once; I have to awkwardly queue up Plan Outfit interactions for every clothing category. Then I have to go to the mirror to edit their hair and makeup separately. It’s a whole ordeal I would just rather not deal with. I also can’t edit NPCs until they’ve moved into my house which means my Sims are stuck dating some ridiculous-looking townies. I’ve been spoiled with the convenience of having all of this stuff at my fingertips in The Sims 4. (mod link)

So what’s the final takeaway here? Do I love The Sims 2 or hate it? Well, in spite of its somewhat awkward and clunky mechanics and lack of things to do in comparison with later titles, The Sims 2’s charm and attention to detail really keep this game relevant almost 20 years later and that’s a difficult feat for a video game to accomplish. I’m nearing my 2nd generation in my current playthrough and I don’t intend to stop playing anytime soon. I say there isn’t as much gameplay as there is in later titles but that doesn’t mean there isn’t enough to still be fun and enjoyable. I still have plenty I want to do in the game. And truth be told, The Sims 2’s greatest strength is its ability to make you fall in love with your Sims without even trying. Those small everyday moments between Sims that happen spontaneously without you having to dictate every single interaction are what make The Sims 2 the most authentic life simulation experience even to this day.

The Sims 4 might be my #1 game now but I always have and always will love The Sims 2 with all my heart. It’s just… special.