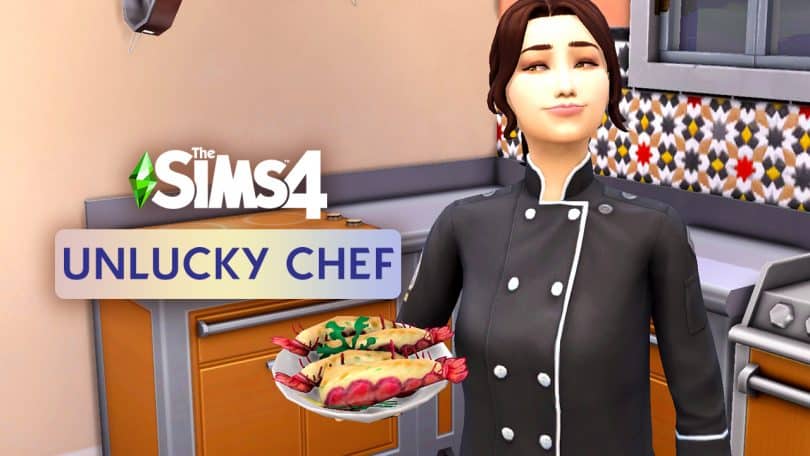 We became a Celebrity Chef by pretending to know how to cook. No, really.

We’re back with another scenario playthrough! This time, we’ll be diving into the Unlucky Chef scenario where our aspiring chef was certainly unlucky in every way… except in cooking thanks to her impressive ability to avoid stoves and ovens throughout her entire career. 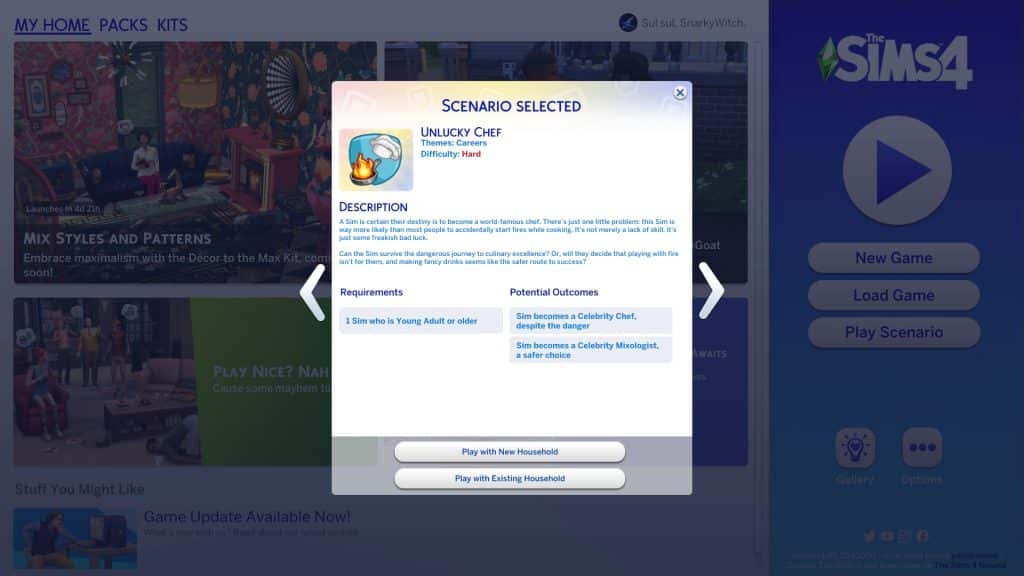 You’ll notice the scenarios have gotten a bit of a revamp. Along with lots more new scenarios, there are now difficulty ratings on each scenario to give you an idea of the time and effort it will take players to complete them. The Unlucky Chef scenario is listed as a Hard scenario but we’re veteran Simmers, we ain’t scared of no scenarios!

The scenario description states that your Sim aspires to be a world-famous chef but their unlucky talent for starting fires might get in the way of their dream. You need a household with one Young Adult or older Sim and there are two ways to complete the scenario. Your Sim can either reach the top of the chef branch of the Culinary career despite the danger or reach the top of the Mixology branch, instead, as a safer option.

We spent minimal time in CAS customising our Sim and moved her into a starter home in Tartosa. After all, a setting based on Italy is perfect for a budding chef. Italy is known for its rich cuisine.

Starting from the Bottom 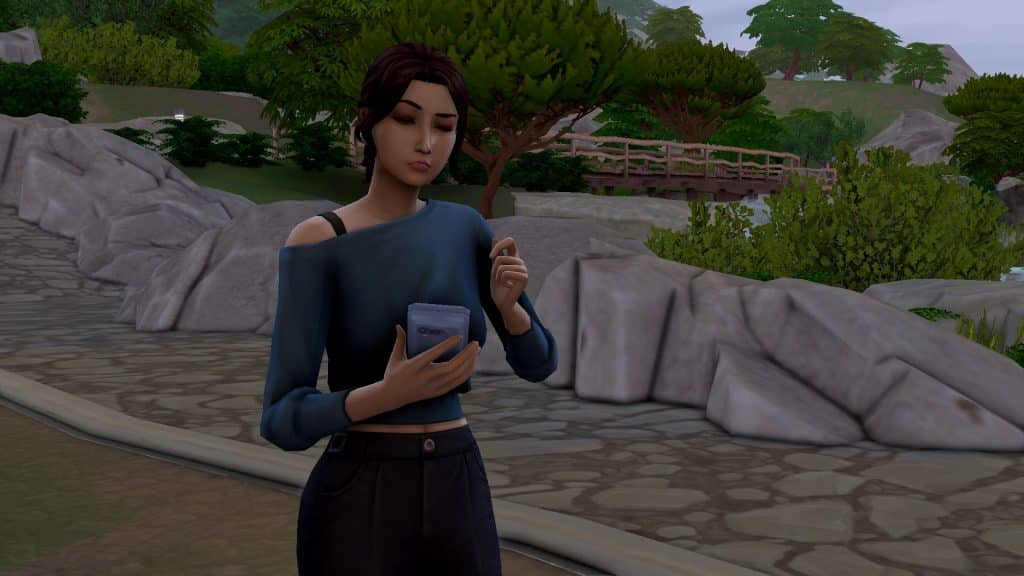 Your Sim will be starting out unemployed with no skills so they’ll have to get to the top of the Culinary career starting from the very bottom. This was going to take some time but we were up for the challenge. We quickly got our Sim, Claire, a job in the Culinary career and got to work making some dishes. The dishes in question? Garden salads. We wanted to see just how far our Sim could make it in the Culinary career without actually using a stove or oven, given her habit of starting fires. Yes, our plan was to fake it ’till we make it.

Things went without a hitch at first. She got a few promotions, she completed the first milestone of the Master Chef aspiration, and she was building both Cooking and Gourmet Cooking skills impressively fast despite the fact that she only ever made garden salad, caprese salad, onigiri, and fruit and yogurt parfaits. 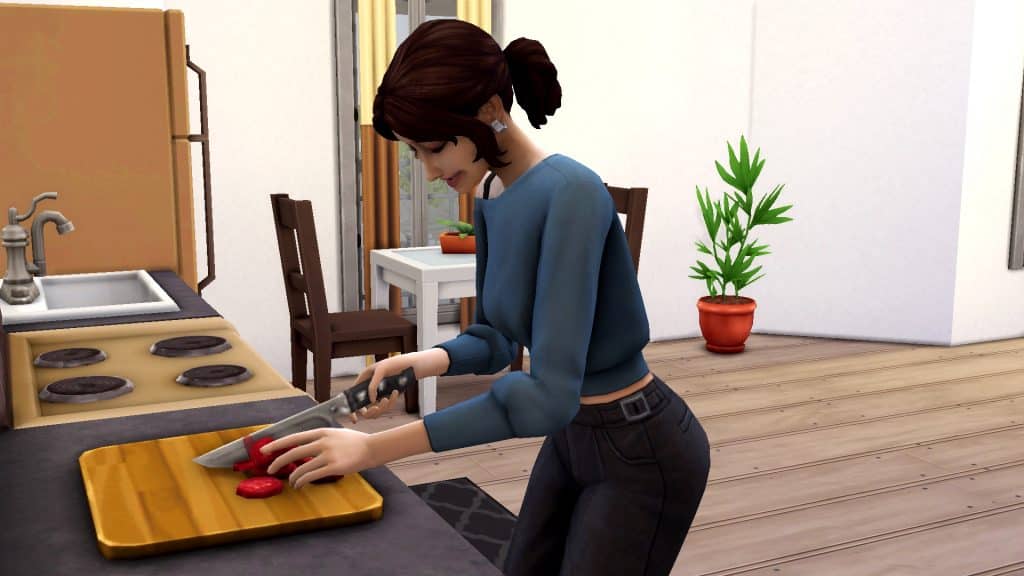 Then came the inheritance phone call. This seems to happen to us in every scenario playthrough, doesn’t it? Well, we could have asked Under What Conditions to get a smaller payout immediately but where’s the fun in that? Of course we chose MONEY MONEY MONEY and ended up having to find a spouse in 7 days. We want the big payout! The trouble was, the only people she knew in town were her new friends, the Markovics, who were engaged to each other. Time to be a homewrecker, we guess. 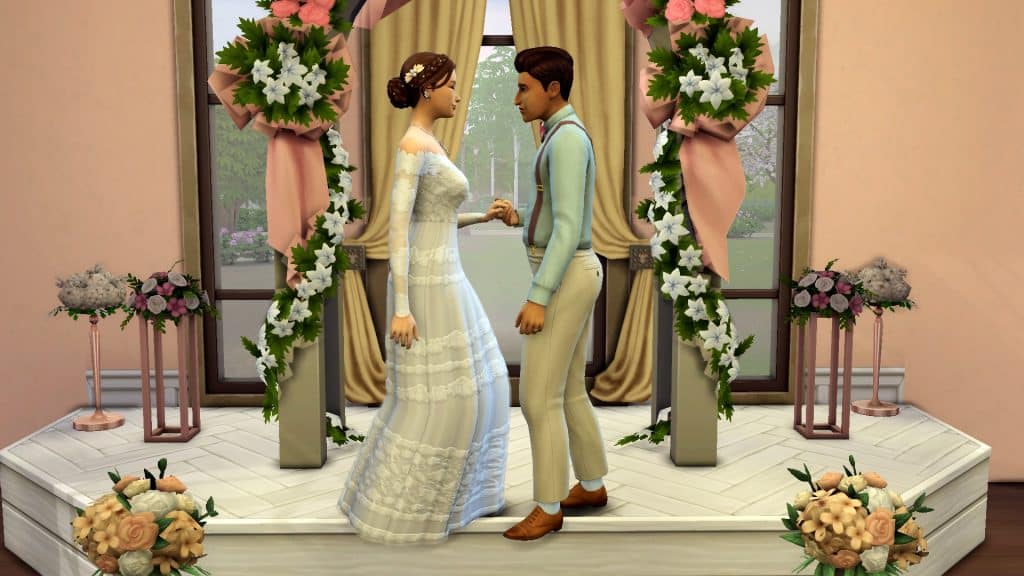 Long story short, Claire seduced Lucia’s fiancé, Mateo, convinced him to break up with Lucia and then quickly married him. And yes, My Wedding Stories is still broken so we didn’t actually throw a wedding. We just got them dressed up and sent them to the wedding venue to marry under the arch without any events attached. Claire was rewarded with over $15,000 for her efforts. Not bad! Oh and there’s also the fact that Mateo took every last simoleon from his ex-fiancée when he left. That helped, too. 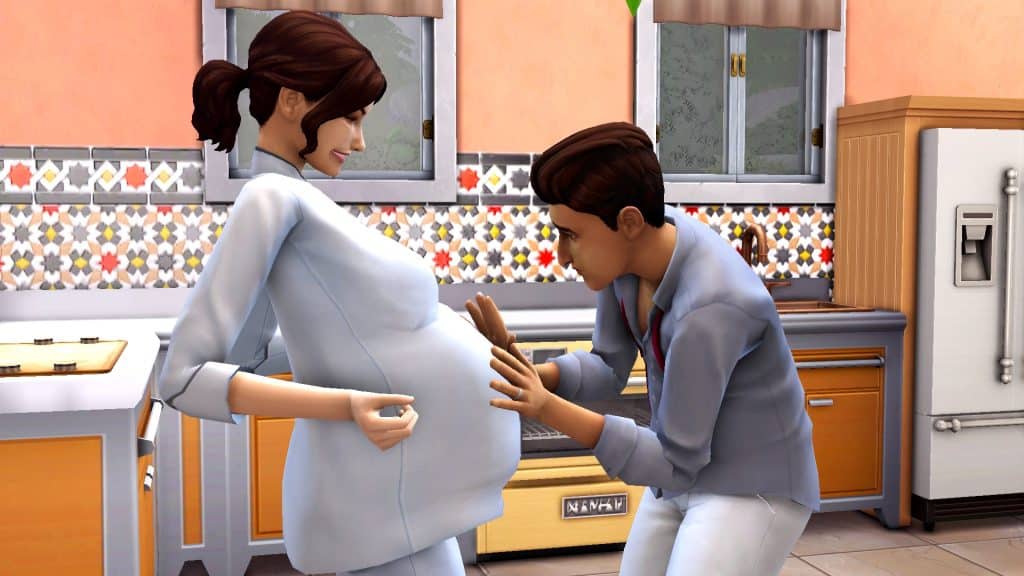 Her new life as a wife and mom meant her career progress slowed down a bit but Claire kept chugging along, anyway, and was still gaining promotions, just a little slower than before. When their son, Camden Markovic, was born, it seemed this family had found its happily-ever-after. But Claire’s marriage was short-lived. 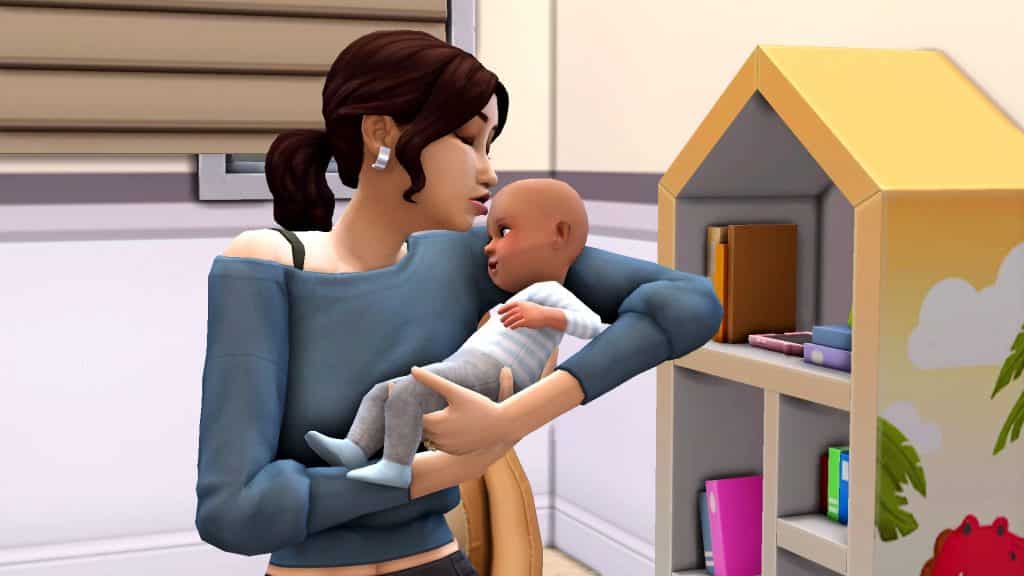 Right after Camden was born, Claire threw herself back into her career and aspiration, which meant dinner parties. Dinner parties where all that was on the menu was salad and yogurt, of course. But there was a problem. Lucia, Mateo’s ex-fiancée. She just couldn’t let go of Mateo and hung around outside the house day and night like a creep. Nothing they did deterred Lucia for long. She was always there. And she was outside the house during Claire’s dinner party.

While Claire was distracted with her guests inside, Mateo disappeared outside. We wanted to know what he was up to when we were shocked to see him offering a rose to Lucia! He snuck out of the house while his wife was busy to go flirt with his ex-fiancée! Claire was understandably furious and let him have it right there in the yard before kicking him out of the house in a messy divorce. Mateo ended up going right back to Lucia and Claire was left a single mother to their son. She kept all his money and stuff, though, which was a small consolation.

Fake It ‘Till You Make It 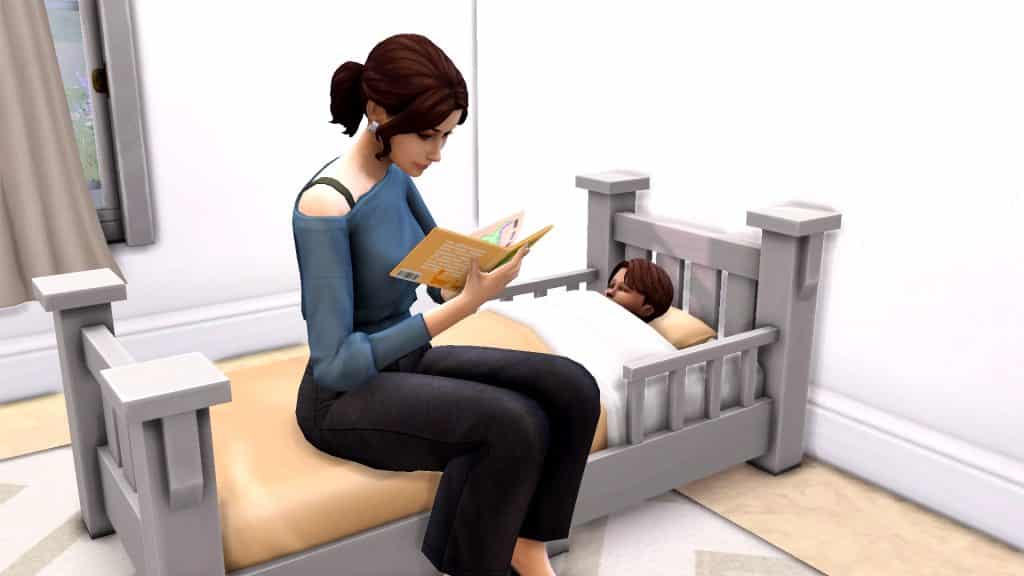 That messy but short detour once again threw a wrench in Claire’s culinary aspirations but she was determined. She went right back to work and hired a nanny to care for her son while she was out of the house. Soon, she hit her stride and found a good balance between work and caring for Camden and the promotions started rolling in quickly again. Somehow, she still managed to make steady progress in her career as her son grew from a baby, to a toddler, to the worst behaved child we’ve ever had the misfortune of raising in The Sims 4. Camden spent the majority of his childhood grounded from everything.

At long last, Claire made it to level 8 of the Culinary career, specialising in the Chef branch just like she always wanted. She still hadn’t started a single fire thanks to her salad-making skills. She was so close to the top but she did complete the Master Chef aspiration, allowing her to purchase reward traits to help her with her career even more. She moved on to the Super Parent aspiration and thanks to her son’s talent for getting into trouble, she progressed through that aspiration quickly, too.

Ironically, despite living off of salad, Claire had put on some weight over the years so she took up jogging and plumboomba dance routines in her spare time to get back to her pre-mom bod. Oh, and she got another one of those inheritance calls but Claire’s wiser this time and was smart enough to ask about the conditions. She’ll take the money without the unfaithful husband, thanks.

At this point, Claire had mastered both Cooking and Gourmet Cooking without ever actually cooking anything. We found it hysterically funny that she had made it so far while bluffing so hard. Claire must be Sim-living proof that you can, in fact, fake it until you make it because she did become a Celebrity Chef, which completed the scenario in a whopping 30 days. 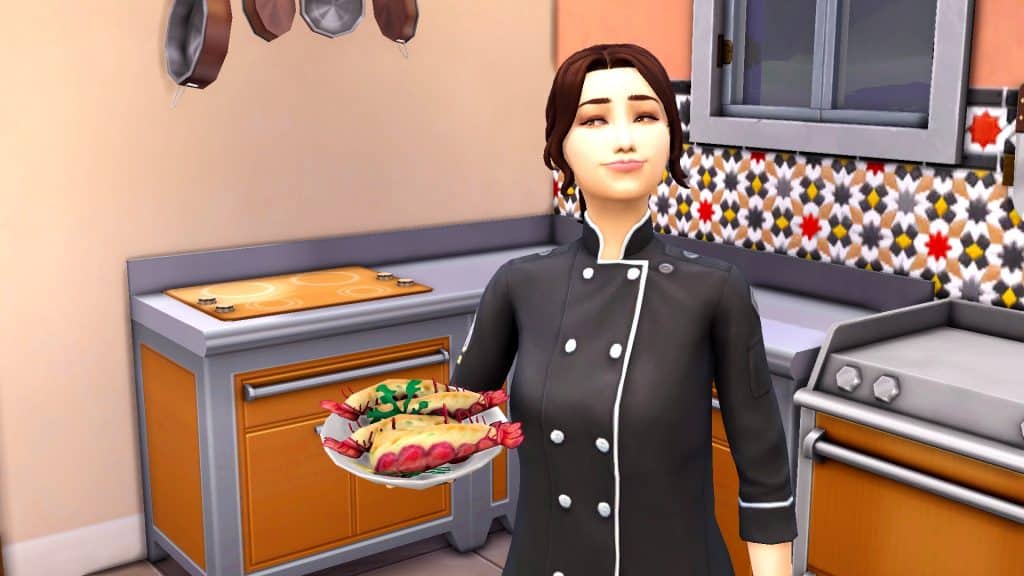 But of course, we had to play it risky just one time before we said goodbye to Claire. Yes. It was finally time to use the stove and oven. Holding our breath, we instructed Claire to make one of the most complex dishes you can make in The Sims; the iconic lobster thermidor. And… she made it perfectly without starting a fire! This was simultaneously anti-climactic and hilarious. Well played, Claire. 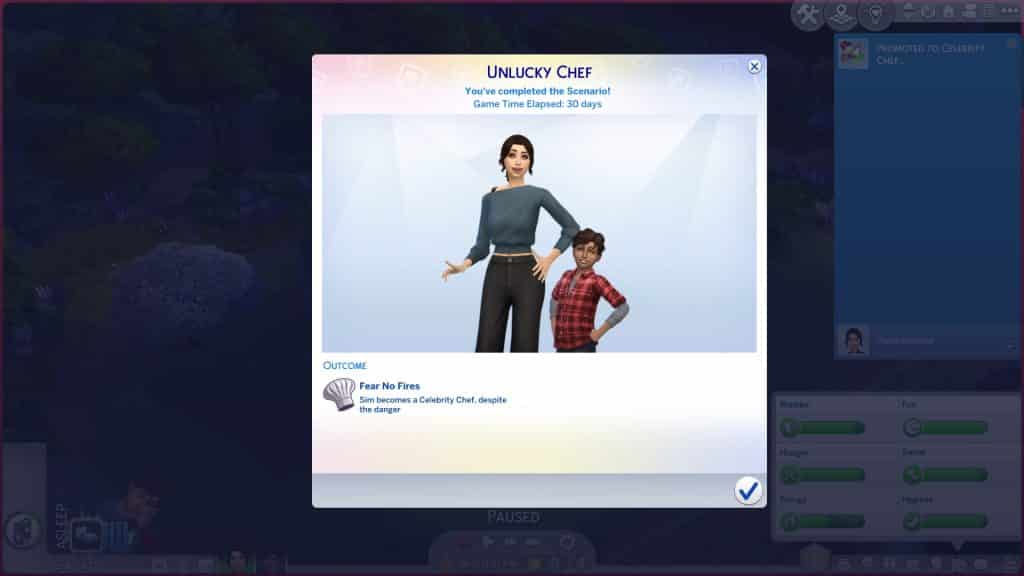 This scenario was challenging, engaging, funny, and full of unexpected drama that we didn’t plan. We ran into no glitches regarding the scenario, it worked the way it was supposed to and traveling to different lots didn’t auto-complete it. We were also able to add and remove household members without breaking the scenario, although we had to do this through the Manage Households menu. We got a popup warning us we would end the scenario if we did this in-game.

We highly recommend this scenario to experienced Simmers who want a good challenge and a decently long scenario playthrough. We did this scenario with no cheats so our time is similar to what you can expect in your own game. Can you beat our time? Let us know in the comments!