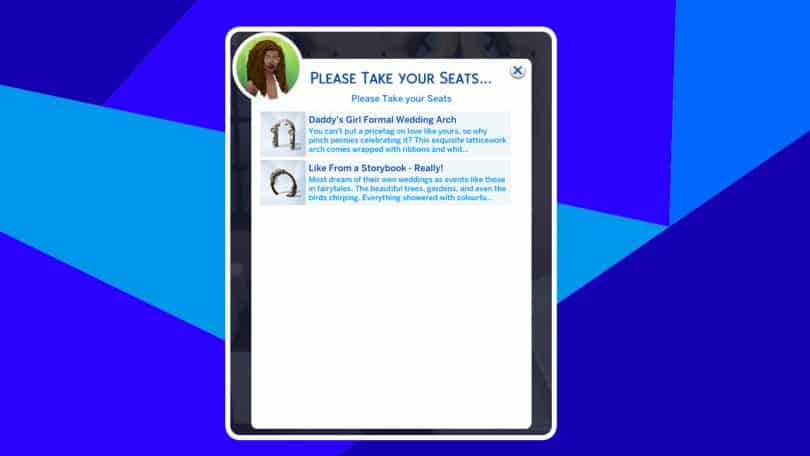 My Wedding Stories got updated with a small, yet useful feature.

By now, it’s no secret that My Wedding Stories is… broken. Although The Sims Team has promised that big fixes will be coming, the pack is still broken for the time being. However, it does seem like My Wedding Stories received some small tweaks in the March 15th patch because players have noticed a new detail that doesn’t seem to have previously been there.

kaiwryplays on Twitter noticed that she was able to choose which wedding arch she wanted her wedding guests to sit near. The wedding venue in the new world of Tartosa has two wedding arches; one outside and one inside so your special day will be able to go ahead rain or shine. The only problem is that your Sims would have no idea which arch to sit in front of when you told them to take their seats.

This seems to be new with the update. If ur wedding venue has two arches you can choose where ur guests sit at. #MyWeddingStories #TheSims4 pic.twitter.com/GD3hIm9xCj

When we played with the early access of My Wedding Stories, this feature was not in the pack. We would click one arch and select Please Take Your Seats with no popup appearing like Kaiwry shows us here. The result? Sims would wander about and sit in whatever random seat they found, whether it was the reception tables out in the courtyard or the other arch way on the other side of the lot. Our wedding guests ended up scattered throughout the entire venue and once they were seated, it was impossible to make them get up to sit somewhere else.

After the patch on release day that was “supposed” to have fixed the pack but didn’t, we still didn’t have this feature when we tried to throw wedding ceremonies. So it does appear that this is a new feature that was sneakily added in the most recent game patch. We’re not sure why this important detail was left out of the patch notes but we appreciate having this option in the game. Hopefully our Sims will be smarter about where they choose to sit at wedding ceremonies now.

A big thank you to Kaiwry for being the first to spot this and let the Simming community know about it!

The Sims 4 My Wedding Stories will get an important Patch later this month addressing the main broken features and bugs in the game. Check out the Laundry List!