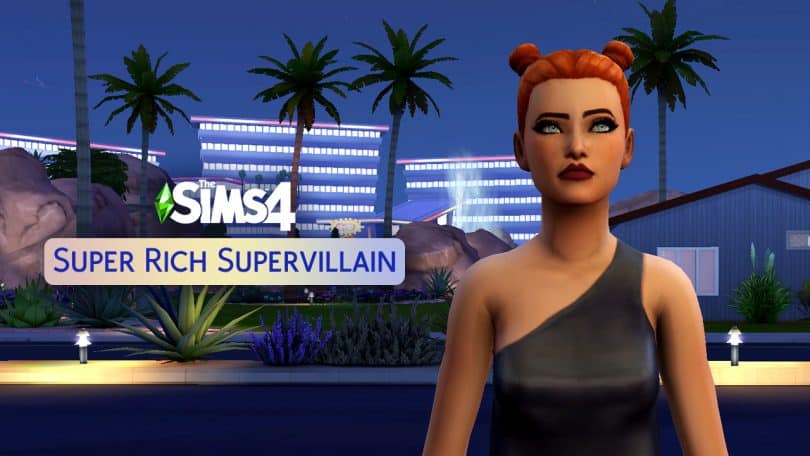 The Sims 4 has added so many new scenarios to the game recently that we’re still working our way through them all! The scenario we played through this time, Super Rich Supervillain, is a permanent scenario that’s here to stay for good, so start it anytime you like! 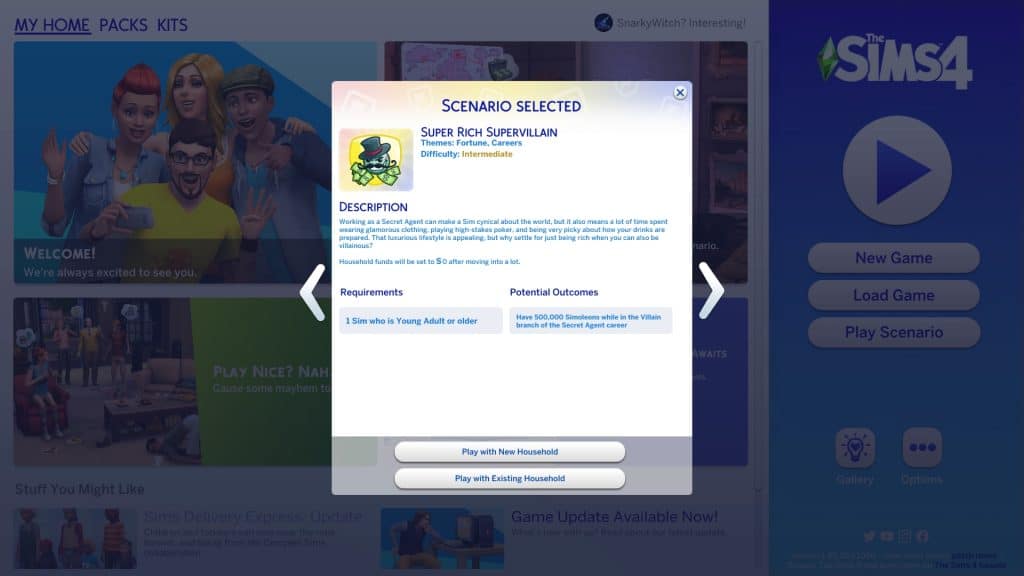 You’ll notice the scenarios have gotten a bit of a revamp. Along with lots more new scenarios, there are now difficulty ratings on each scenario to give you an idea of the time and effort it will take players to complete them. The Super Rich Supervillain scenario is listed as an Intermediate scenario.

This is a permanent scenario so there’s no need to rush to start it before a certain date. It will be available in the game forever so start it whenever you like! 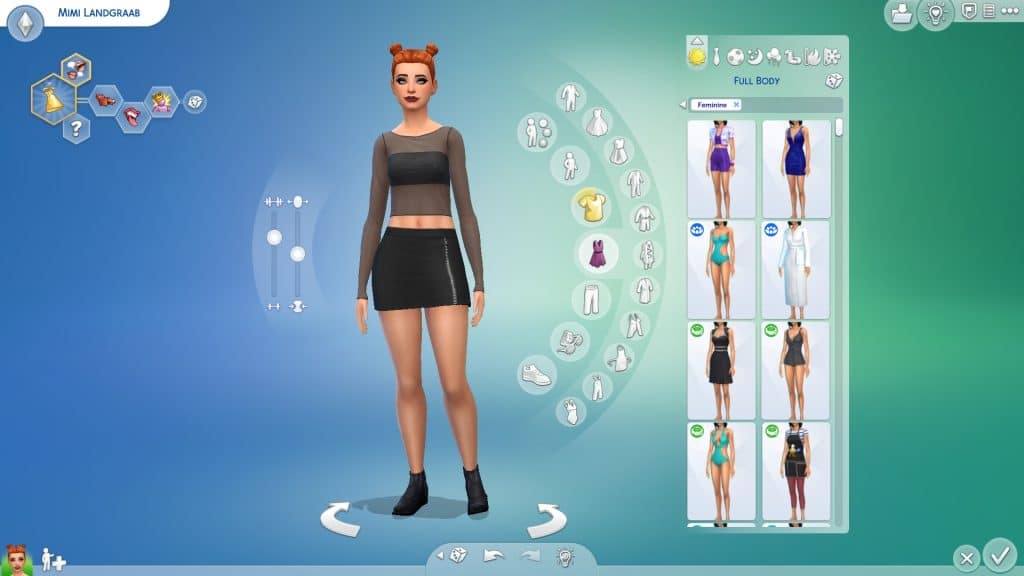 We felt like having a bit of fun with this scenario so we brought in none other than Mimi Landgraab! You can find Mimi in Maxis’ catalogue on the Gallery.

On the Road to Fortune and Infamy

We got Mimi set up in the middle class neighbourhood of Oasis Springs in a trendy but tiny starter home. We had a plan going into this scenario; earning $500,000 from her career was going to take forever so Mimi would be supplementing her income with money trees. Lots of money trees. The only snag with that is a money tree seed costs 5,000 satisfaction points. Mimi would need to complete an aspiration to earn her first money tree. 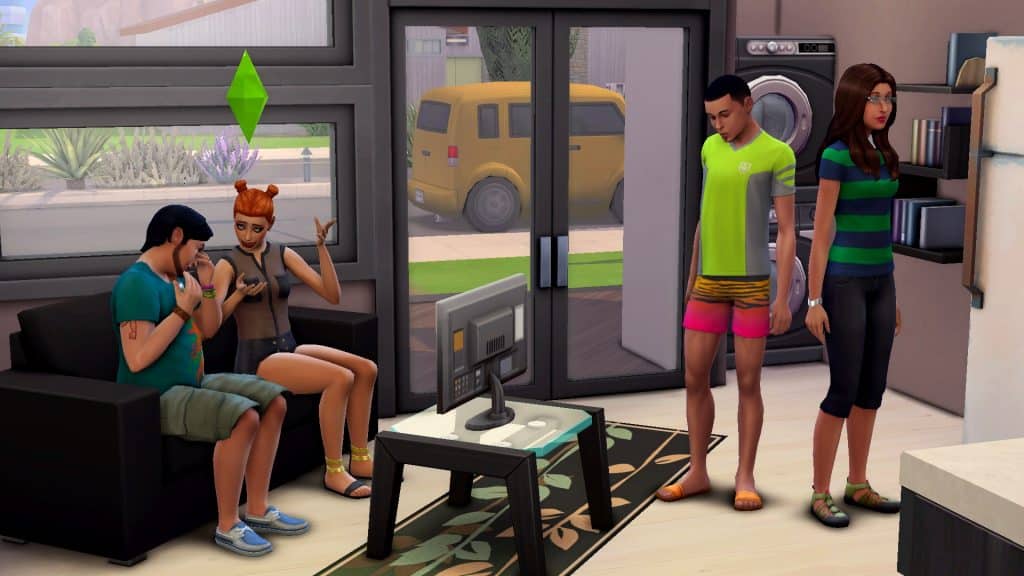 She came with the Party Animal aspiration which is luckily one of the easiest aspirations to complete fairly quickly, so we stuck with that. We used the tried-and-true photography hack to immediately become good friends with the entire Roomies household when they came over for the Welcome Wagon. They didn’t seem very enthused with Mimi’s weird desire to take photos of them but it did the trick. Zoe, Gavin, Mitchell, and J were all friends with Mimi by the time the welcome wagon ended, which completed one goal of her aspiration. She also did a lap around the neighbourhood introducing herself to 6 more Sims to finish the first milestone.

We couldn’t totally ignore her career, though. She started at level 6 of the Secret Agent career with all the necessary skills for that level but that meant we still needed two more promotions to pick a branch and go down the Villain path. When Mimi wasn’t chilling with her newfound friends, she was browsing Intelligence on her laptop and struggling to understand the rules of chess. 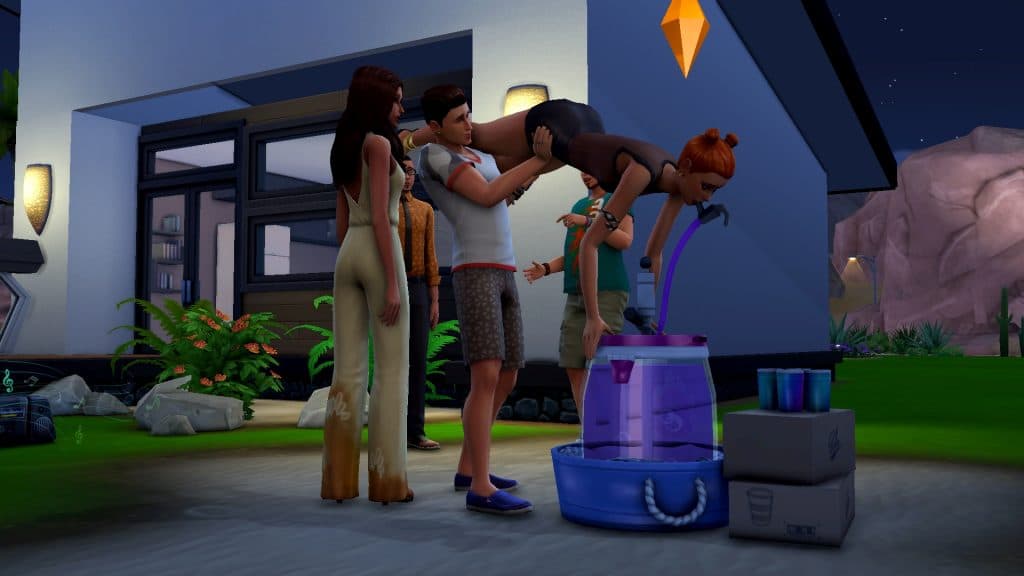 It’s not easy to juggle a hopping social life and a demanding government job. Mimi spends her nights getting hammered with her neighbours at keg parties in her front yard and ends up dragging herself to work exhausted and smelly, making her career progress slow. We know, we know, you might think why waste time doing this aspiration at all? It’s not part of the scenario but trust us. The detour will be worth it when she has those money trees. 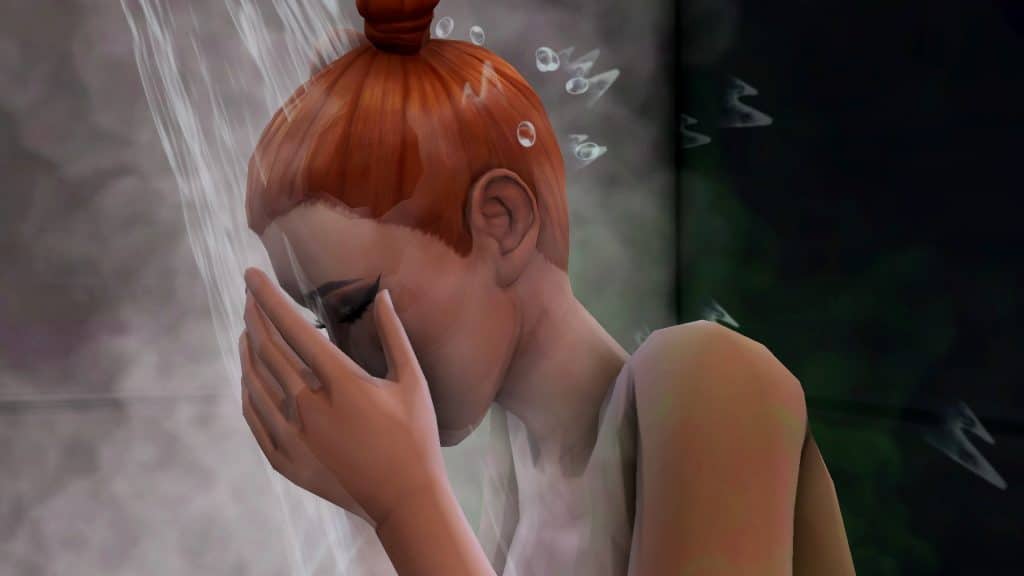 But little did we know the game was about to hit Mimi hard… and then mock her. Thanks to the new Neighbourhood Stories, poor Mimi got a call in the middle of the night informing her that her friend Gavin had tragically died from laughter! Losing a good friend so suddenly and unexpectedly set Mimi back even further. She was so sad, she couldn’t focus on anything and she would cry in the shower all the time. So when the Lottery came around, we thought “Why not?” It’s not that much money to buy a ticket and if we win, not only would it cheer Mimi up but it would save us the trouble of having to party our way to a money tree! 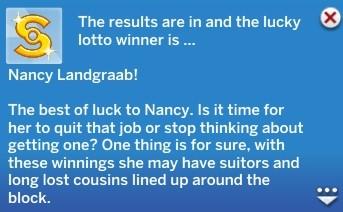 … GRANDMA?!?!?!?! Oh come on! You’re already rich, why do you even need to play the lottery, Gran?! This is just adding insult to injury… 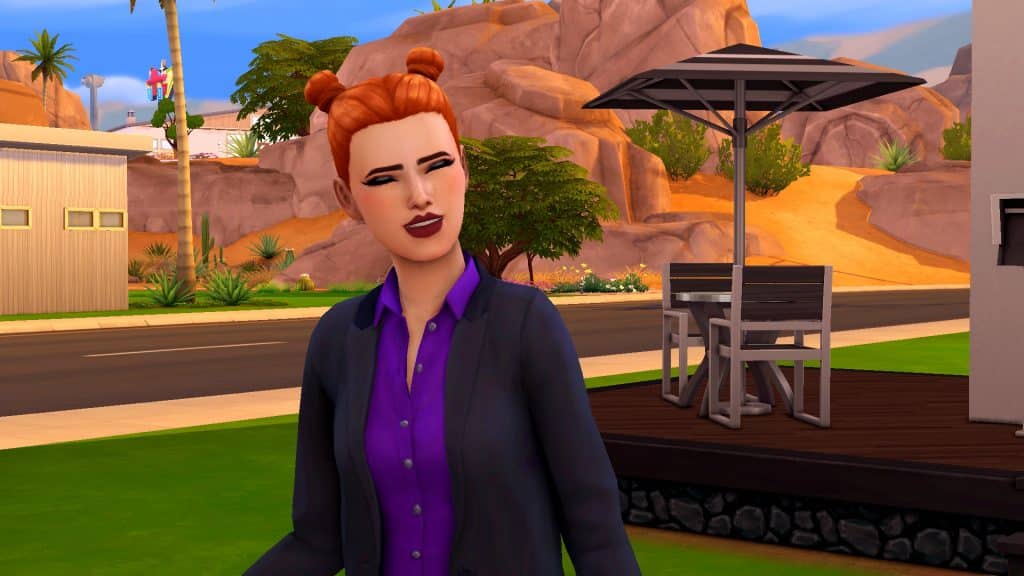 Well, Mimi couldn’t sit around moping forever. The best way to get over the tragic death of a friend and being humiliated by your own grandmother? Throw a party, obviously! It was time to gather what was left of her friend circle and live it up! Mimi partied at her friends’ house, she partied at the park, at the museum, at the chalet, just about anywhere she could throw a party to satisfy her next aspiration goal. 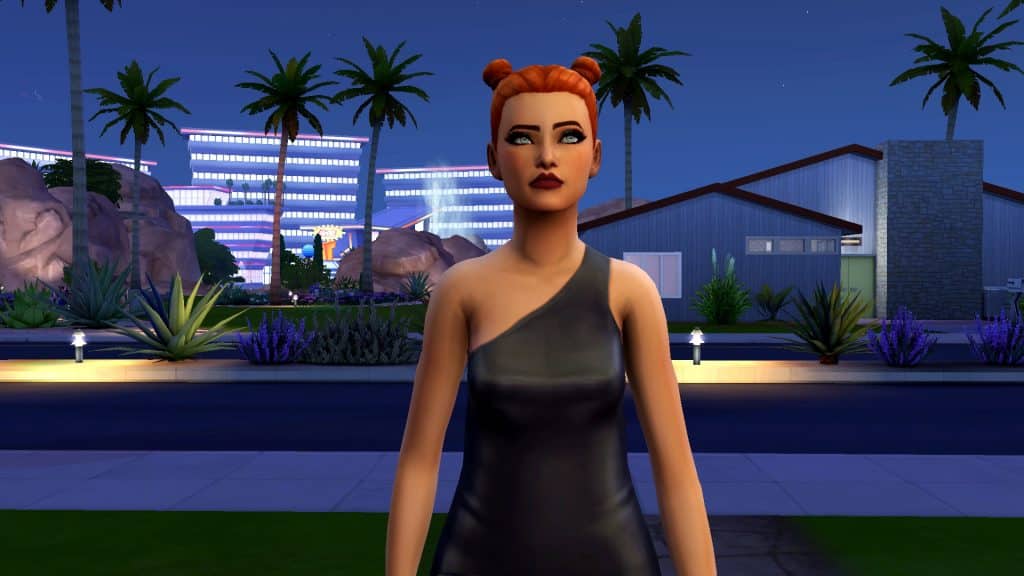 Shortly after getting her first money tree, Mimi also got promoted to the Villain branch of the Secret Agent career! That was one goal down and the other one almost finished; she just needed more money trees to mature. Since Mimi had finished her career goal, we went ahead and bought her the Professional Slacker reward trait so we wouldn’t have to focus on her career anymore; she would never be demoted or fired no matter what she did. We wanted to focus all our efforts on caring for Mimi’s money trees. 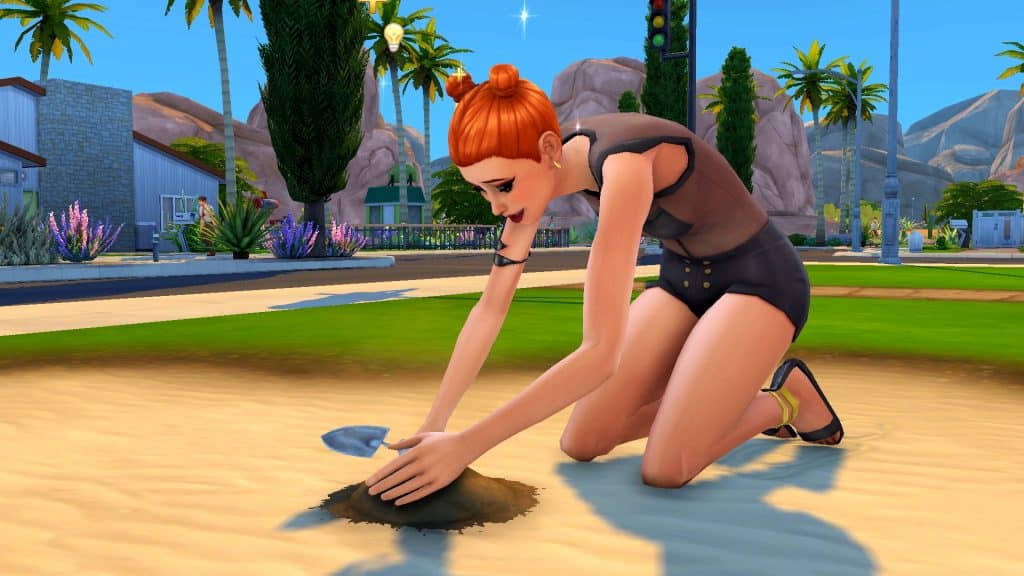 When her first money tree matured, we didn’t harvest from it. Instead, we put it in the household inventory which spawned 5 more money tree seeds. We then put the tree back and planted the other five seeds. We did this again the next day to give us a total of 12 money tree seeds growing in Mimi’s front yard. A Normal quality money tree produces $8,000 a day in all seasons. It will produce much more at higher qualities but with 12 Normal money trees, Mimi would still make $96,000 from them every day. She’d be extremely wealthy in no time! 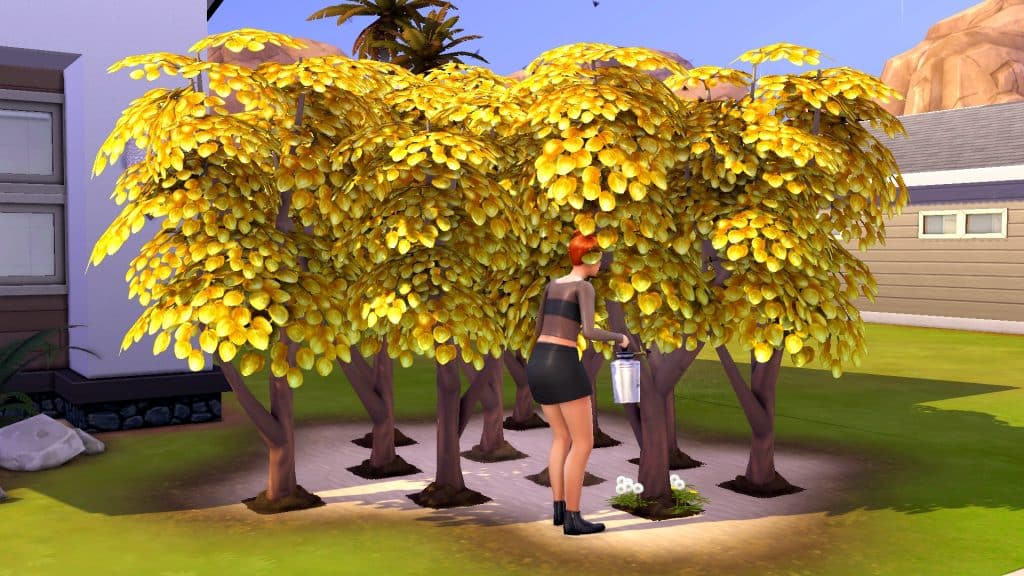 Once all the other money trees matured and started producing simoleons, it only took Mimi a few days to make $500,000 and complete the scenario. In total, it took us 25 days to complete this scenario. We’re glad we took the extra time to focus on aspirations at the beginning; otherwise, it would have taken us much longer to get that kind of money from her career alone. 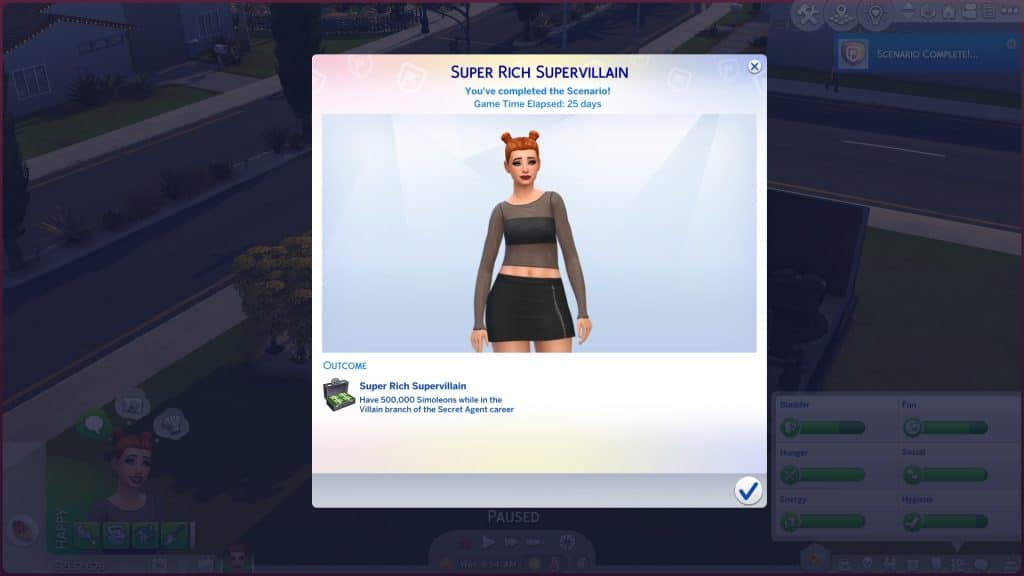 See Grandma? We didn’t need you and your lottery winnings after all! So HA!

We liked this scenario a lot! It’s a challenging one that takes some time and effort but there are so many ways to make money in The Sims 4 apart from careers that there’s a lot of room to play this one your own way and put your own twist on it. We had fun helping Mimi become a Super Rich Supervillain. The curveballs the game threw at us, both sad and hilarious, kept us on our toes and forced us to adjust our strategy a bit throughout the scenario.

If you enjoy a decent challenge and think the Secret Agent career sounds interesting to play, we definitely recommend this one!