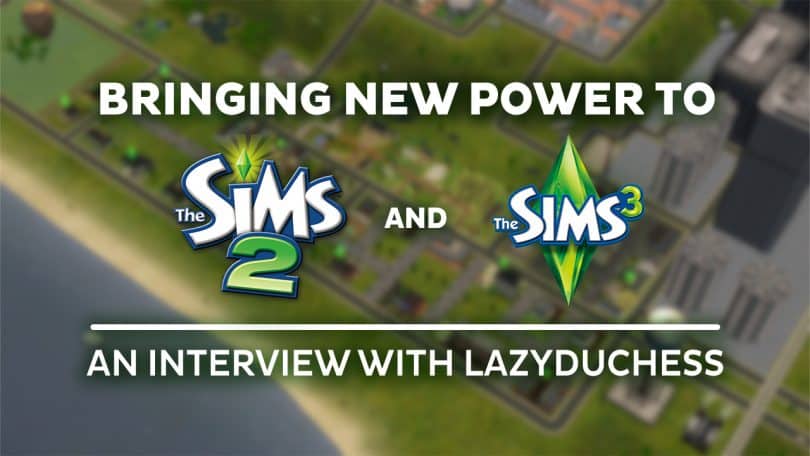 While so many creators and Simmers have moved on to focus on The Sims 4 exclusively, one modder stayed behind to continue pouring all their love and devotion into previous Sims titles. The result? Some of the most amazing mods for The Sims 2 and 3 that previously were thought to be impossible, all still being updated and supported by their creator.

That creator is LazyDuchess. Many Simmers who still enjoy The Sims 2 and The Sims 3 will probably know about LazyDuchess. They are the modder behind some ground-breaking mods like story progression for The Sims 2. We wanted to shine a spotlight on this talented creator who continues to show love to some of The Sims franchise’s earlier titles but we wanted to go deeper than just the mods. Who is LazyDuchess? What is their creative process? What motivates them as a creator?

We had the great privilege to sit down with LazyDuchess and conduct an interview. We wanted to know not just about their work on The Sims 2 and 3 but also about what got them interested in modding games in the first place. We wanted to go way back and get a glimpse into LazyDuchess’ creative journey and process. LazyDuchess was a wonderful interviewee and gave us very insightful answers!

Stay tuned until the end of the interview where we’ll be showcasing some of LazyDuchess’ favourite mods they’ve worked on!

How long have you been modding video games?

I’ve been modding games for a loong time, I started with Counter-Strike 1.6 way back in I believe 2009 or 2010. It was mostly player or weapon reskins of the quality you would expect from a 9 year old, and I used to show them to all of my friends and they went crazy over it. This motivated me to eventually move on to games like GTA, as these two games were basically all I played with my friends back then

What initially motivated you to start modding The Sims?

I simply just love the game, so wanting to improve it even further was a no brainer for me as someone who is super into game development, coding and modding. It was the perfect outlet for me to put my skills to use, and the games had a lot of issues deemed unfixable by the community like the Firstborn Syndrome that I really wanted to tackle to really challenge my knowledge and improve my favorite game all at the same time. Getting the Sims 2 UC back when it was given out for free by EA was also a huge factor, it felt like rediscovering why I love games so much, it’s definitely a timeless classic.

A lot of modders have since moved on to The Sims 4 but you continue to focus on creating new content for The Sims 2 and 3. What draws you back to these timeless classics?

I had actually started modding The Sims with TS4, way back in 2015 or 2016, although I didn’t really publish anything. I gave it a fair chance, but it wasn’t good or complete enough to me, coming from TS3 and TS2, so I just went back to what was comfortable to me and kept me consistently engaged and haven’t really looked back since. TS2 has excellent family and generational play, there is a ton of love put into each interaction and I think has the most complex and real feeling Sims, and that’s exactly what I want from a Sims game. TS3 has way too many issues – trying to fix them is a fun challenge on its own – but it’s also so ambitious and to me offers a pretty fresh take on the series with the more RPG-like elements, opportunities and the open world. To me they’re both great games as they do their own thing pretty well.

Where do you look to for inspiration when brainstorming new mods?

Most of what I do usually comes naturally, like I’ll be playing TS2 and come across something I think could be improved like nannies being awful at their jobs, personality points being tied to signs, lack of Story Progression. My friends also give me good ideas and I’m also always looking to try things people have deemed impossible in the past.

What has been your most challenging but rewarding project to date?

My height mod for TS2, for sure. It’s something I wouldn’t even have considered possible not that long ago, but with all the disassembly and reverse engineering I’ve been doing on TS2 it finally became achievable. It’s a culmination of everything I’ve been doing up until that point.

Other than testing your mods, do you still play The Sims in your free time? What’s your favourite way to play The Sims?

I do! (Not very much the past few weeks though, admittedly). I love making a couple families of unique Sims I can come up with and playing rotationally, checking up on them regularly with SP enabled. I have a very laidback playstyle but I tend to restart like 2 generations in.

What are some of your favourite mods for The Sims 2 or 3?

It’s hard to pick a few. For The Sims 2, Nopke has a ton of great mods like SkyFix and more sliders that are absolutely essential, there’s TwoJeff’s ACR to spice up the gameplay and have autonomous romance which I always play with. BartekStu has also been making amazing mods, like the Food Overhaul that makes food work with ingredients in a similar way to TS3. TS3 obviously everything NRaas is a must have, Story Progression especially IMO. Simler is also constantly updating his GameplaySystems core mod which fixes a TON of EA mistakes and makes for overall a way better gameplay experience that’s still Maxis like.

How did you come to choose the name LazyDuchess as your online handle? Is there a story behind it?

My name comes from LGR, formerly known as Lazy Game Reviews! He’s my fave Youtuber, Duke Nukem is a staple of his channel so I combined those and ended up with Lazy Duke -> Lazy Duchess. Not very original at all I’m aware :p

Is there anyone you’d like to collab with in the future?

I’d love to collab with LittleDica – he’s a good friend and so amazingly talented.

What advice would you give to any aspiring modders for The Sims series who are just starting out?

The best advice I can give is to learn to code a little beforehand, in a more relaxed language like Javascript or even Python. Script modding for both TS3 and TS2 is pretty hard and different compared to TS4 and kind of its own challenge, but wrapping your head around Object Oriented design and how programming works in general can help immensely.

If you were stranded on a deserted island (that conveniently had electricity for some unknown reason) and could only have one expansion pack each from The Sims 2 and 3 with you, which ones would you choose?

I can barely remember what it’s like to play TS2 without all EPs. I think I’d pick Nightlife, as it added so much I can’t imagine playing without nowadays, and TS3 definitely without a doubt Seasons.

LazyDuchess pointed us to some of their mods that they’re most proud of and we’re excited to showcase them!

Height Mod for The Sims 2 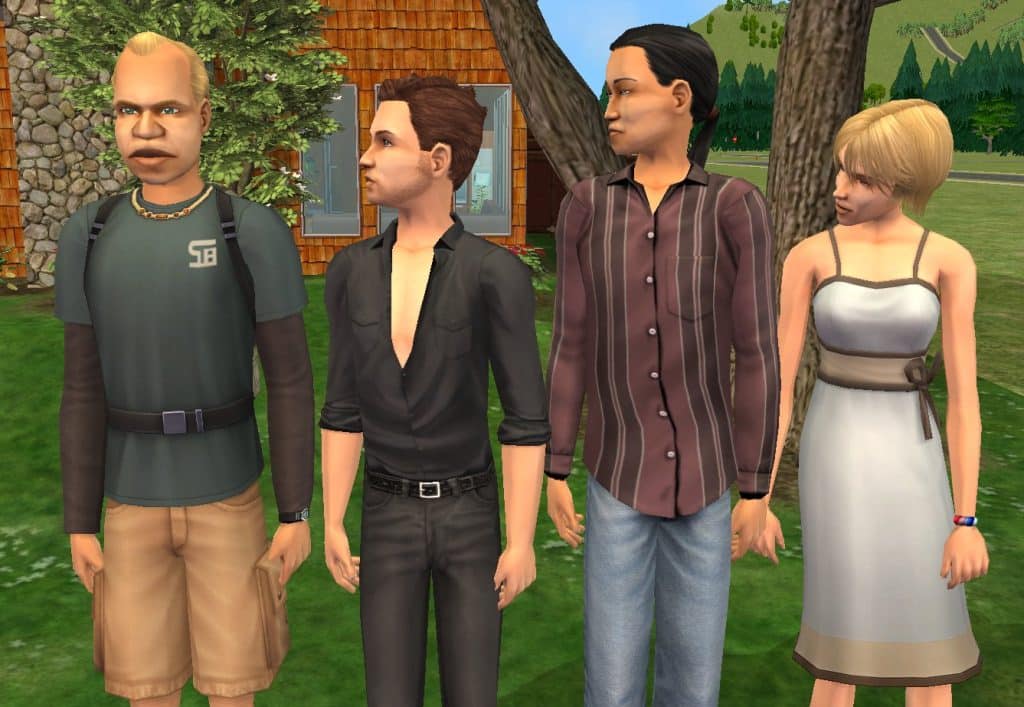 Although LazyDuchess considers this an experimental mod, we are still incredibly impressed with it nonetheless. Height differences in The Sims 2 is something that was previously thought to be impossible until LazyDuchess decided to redefine what’s possible. It just goes to show that impossible is just a limitation we place on ourselves. We’re excited to see how this mod develops further in the future.

RPC Launcher for The Sims 2 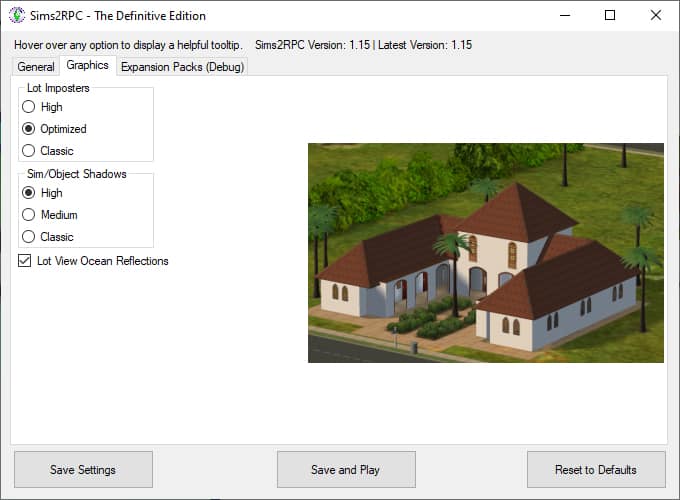 This mod is truly a marvel in modding. It’s a modded launcher that allows you to customize so many different things about your playing experience. You can generate high quality lot “imposters” (basically the lots you see around your active lot in Live Mode), fix the dreaded firstborn syndrome where all firstborn children will have the same genetics on every playthrough, choose which expansions you do or don’t want to play with, and even allow the game to use up to 4GB of RAM instead of 2GB.

Shadow Extender for The Sims 3

The shadow extender mod for The Sims 3 will really help make your Sims 3 worlds come alive. This mod fixes the fuzzy, faded shadows that get cast from world objects and makes them appear nice and crisp with no strange-looking fade effect. You can see the before and after in the screenshots above. This fix really makes the whole world feel more crisp and realistic.

We had such a great time chatting with LazyDuchess and we look forward to seeing all their future projects!

You can find LazyDuchess and their work on the following platforms:

Now please excuse us while we run to play The Sims 2 nonstop for the next several weeks.