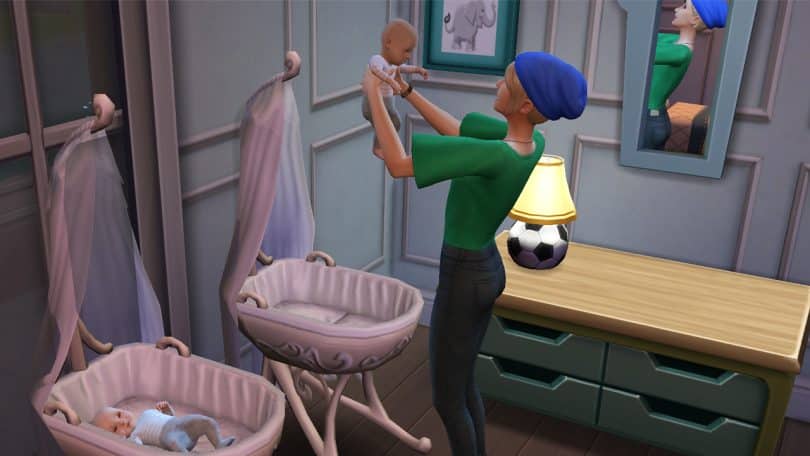 The Dos (and Don’ts) of having twins and triplets in The Sims 4!

Players who like playing with big families may find themselves wanting to speed the process along by having their Sims give birth to twins or triplets. The trouble is, twins and triplets are almost as rare in The Sims as they are in real life. Your chances of conceiving multiples naturally are rather low.

The good news is that there are a few different ways you can greatly increase the chances of having twins or triplets and they don’t involve cheats or mods. We’re going to break them down for you today. We’re also going to bust a bunch of myths about how to conceive multiples. There are several rumours floating around that are completely false so we’ll save you the effort of bothering with methods that don’t work.

The Fertile reward trait is available in the base game so players don’t need any packs to use it. Any young adult or older Sim can purchase this trait from the rewards store for a hefty 3,000 satisfaction points. Sims with this trait have higher conception odds when Trying for a Baby and a higher chance of conceiving multiples. If both parents have this trait, those odds are further increased; the effect stacks.

We’ll warn you that while the Fertile trait does increase the odds of multiples, the difference is not massive. It’s only a slight increase in odds at best which is rather disappointing considering how much it costs. If you only own the base game, it’s your best bet but if you have other packs with ways to increase fertility, then the Fertile trait isn’t really worth the points you’d spend on it.

But beware! Using the On a Dark Ley Line lot trait has a high chance of resulting in the babies being born vampires even if both parents are human.

To ensure a neutral outcome, make sure you’re making a wish on a brand new wishing well when the face above it has a neutral expression. Do not give an offering to the well, as that will change its expression (and potential outcomes). You should get the fertility moodlet.

Like the fertility massage, the odds of multiples are only moderately increased so don’t expect to be guaranteed twins or triplets.

We’ve shown you how to increase the odds of having twins or triplets. Now it’s time to debunk some of the myths out there. We personally tested all of these methods extensively dozens upon dozens of times with the exact same result every time so we can bust these with 100% confidence.

This myth probably arose due to The Sims 3, in which listening to kids music or watching kids TV would greatly increase your chances of having twins or triplets. Not so in The Sims 4. You can do nothing but listen to Kids Radio and watch the Kids Network (even at the same time) 24/7 throughout your entire pregnancy and it will not change the number of babies your Sim will have.

If you tried this and your Sim happened to have twins or triplets… it was definitely a lucky coincidence.

Listening to Kids Radio While Reading

This is a weird one and we’re really not sure where it came from but this doesn’t work, either. For good measure, we read a children’s book while listening to Kids Radio nonstop for 24 in-game hours straight while pregnant. Single baby every single time.

We can see where people might have gotten this idea. Strawberries and carrots do play a role in determining your baby’s gender in The Sims 4… but not the number of babies your Sim will have.

For those interested, eating strawberries during pregnancy increases the chances of having a girl. Eating carrots increases the odds of having a boy. If you want your baby to be born a specific gender, this is an excellent way to influence that.

But as for encouraging twins and triplets? No effect whatsoever.