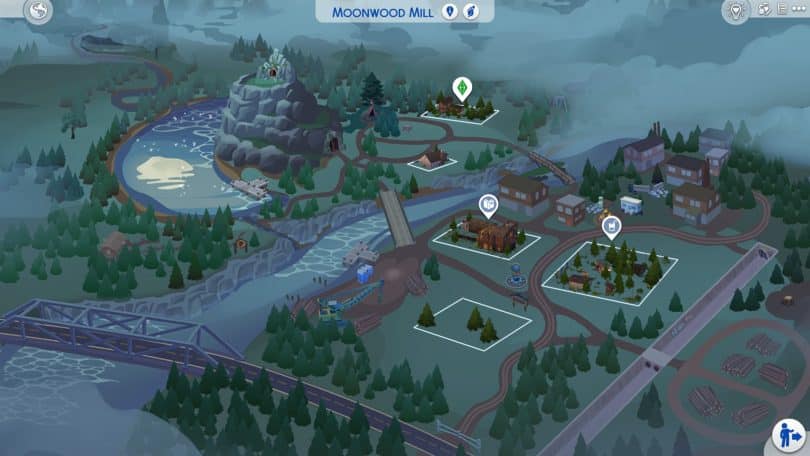 Take a tour of this foggy abandoned logging town! What secrets will you discover?

The Sims 4 Werewolves comes with a new world called Moonwood Mill. The world is inspired by the natural landscapes of Northern Canada. It’s an old logging town that has since been abandoned except for a few… interesting residents who have made the old ghost town their home.

Moonwood Mill has one neighbourhood with 5 lots but there is a lot to explore outside of the lots. Despite it’s small number of lots, the world feels very open and interactive due to the number of places to fish, scavenge, garden, and explore in the large common spaces. Exploring everything the town has to offer will reveal detailed lore about the town’s history.

Even though there is only one neighbourhood, the world is unofficially divided into a north and south section by a river that runs through the middle of the town. The two areas are inhabited by the two werewolf packs in Moonwood Mill, with the Moonwood Collective in the north section closer to the lake and the Wildfangs in the south section in the middle of town. We’ll be dividing this guide between Moonwood Collective and Wildfangs territory to give you a better perspective of where everything is located.

Once upon a time, Moonwood Mill was filled with the bustle and sound of the nearby lumber mill. Today, the town is transformed. The rusted shells of its former industry provide cover for a handful of mysterious denizens who’ve sought out this wilderness-shrouded community, basking in its remote and anonymous nature. It’s a place with a hidden history, and those who live here know that if you dig deep enough, you’re bound to discover some fascinating secrets.

Prowler’s Patch is an empty lot in the south section of town. While it doesn’t have a great view with graffitied porta-potties on one side and dilapidated factories in front, it is in a convenient location in the centre of town with the Wildfangs’ hangout close by. This would be a great location for a Sim looking to join the Wildfangs and if they have the right werewolf abilities, they won’t even need to build on the lot. They can live completely wild in the great outdoors.

Moonwood Mill’s bar is the place to be if you want to let your wild side out with friends. The bar serves plenty of meat-based dishes for its canine patrons and there’s a bonfire, jukebox, guitar, and microphone for some live entertainment. Beneath the bar, there’s a large underground bunker that’s open to the public; however, you might want to steer clear if you’re not into the werewolf scene. Local werewolves have been known to crash and party here.

If you’ve been afflicted with Werebies and sweating it out isn’t doing you any good, you can talk to the bartender here to get your hands on an antidote that will cure you before you fully transform into a werewolf.

The library is inside an abandoned factory that has extensive exterior damage but is full of werewolf knowledge just waiting to be discovered. New werewolves who want to unlock the Lunar Epiphany dormant ability should spend some time browsing through the werewolf books here. Anyone wanting to get over their fear of werewolves might want to pick up a copy of Beyond Big & Bad: Dispelling Harmful Werewolf Stereotypes.

The library also has computers, an observatory, and a small telescope so you can do your Internet browsing and moongazing all in one place.

This tiny starter home is a cozy little place to put down roots in Moonwood Mill. It’s close to the Moonwood Collective hangout so anyone looking to join their pack will benefit from its convenient location. It also has a lovely view of Lunvik Lake and is surrounded by picturesque forests. Two bedrooms make this an ideal place to raise a little werewolf family… or a human family who doesn’t mind their neighbours’ wolfy antics.

The house has two floors with three bedrooms on the second floor. A fourth bedroom is inside the garden shed where Lily resides. The lot has a spacious garden with lots of planters. If you decide to evict the Volkovs and move in yourself or join the Volkov family, this is a great location for avid gardeners and outdoor enthusiasts.

Apart from the five lots in Moonwood Mill, there are plenty of off-lot locations to explore in Moonwood Mill. Since the town only has one large, expansive neighbourhood, you can freely roam around the entire world discovering new locations and items no matter what lot you’re on.

There is an underground network of tunnels in Moonwood Mill that can be accessed from several locations; the portal-potties next to the river on the south side of town, the sewer grate on the far south end of town, and the old bunker in the north end of town to the right of the Volkov residence. There is also a tunnel entrance object in Build/Buy that can be placed on any lot to connect you to the tunnel system more easily.

These tunnels can serve as a method of quick travel around the world once you’ve discovered a new route but they are also full of relics and other treasures. Having the Nightvision ability as a werewolf will allow you to see these treasures more easily and help you find new tunnel routes faster. Humans can enter the tunnels, too, but beware! You might get attacked and leave with a bad case of the Werebies…

The Moonwood Collective hangout is located at the far north of town to the left of the Volkov residence. It’s a tall evergreen tree with a hole in the trunk and is usually decorated with stars and moons hanging from the branches. You’ll see members of the Moonwood Collective pack hanging out here during the daytime hours. If you’re an ally or a member of the pack, you’ll have various interactions available to you on the hangout.

The Moonwood Collective hangout is located in the south end of town near the dilapidated library. It’s a small trailer with a bonfire and weights set outside and is usually decorated in graffiti. You’ll see members of the Wildfangs pack hanging out here during the nighttime hours but they can occasionally be spotted during the day, too. If you’re an ally or a member of the pack, you’ll have various interactions available to you on the hangout.

Greg’s trailer is located in the tall grass directly west of Lunvik Lake. The trailer itself is not clickable and Greg does not show up unless you examine the warning signs in front of his trailer. When he does appear, he’s in wolf form and has max Fury so he’s very volatile and dangerous. Players can try to communicate with him, distract him, or provoke him into attacking them. Greg hates other werewolves but a human might be able to befriend him more easily.

Lunvik Lake lies at the base of the big cliff in Moonwood Mill and is a great location for both swimming and fishing. During the full moon, the mist over the lake glows a very pretty blue and a rare fish can be caught here during this time. Humans born with the Dormant Wolf trait should swim in Lake Lunvik under a full moon once they become teens to awaken the sleeping beast within them…

Moonwood Cliff is in the north end of town and impossible to miss. It’s huge and towers over the whole town. The cliff can be accessed through an opening at the base and rampaging werewolves will often go to the top of the cliff to howl at the moon here, sometimes with their pack mates. The rare moonpetal flower also grows at the top of this cliff but it only blooms during a full moon.