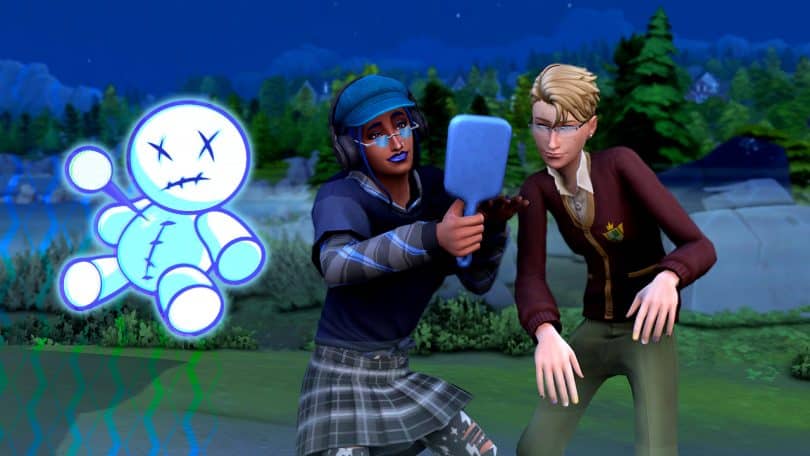 All About Death by Stink Capsule and Urban Myth in The Sims 4 High School Years!

The Sims 4 High School Years comes with two new death types; Death by Stink Capsule and Death by Urban Myth. If you’re trying to complete the Live Fast teen aspiration, be prepared for potentially fatal results; you’ll have to pull off a stink prank and summon an urban myth to complete it.

Sims with level 8 Mischief skill can summon an urban myth. The urban myth death is based on the real-world legend of Bloody Mary; say Bloody Mary in front of a mirror three times and she’ll appear and kill you.

At level 8 Mischief skill, click on a Sim and select Mischief > Summon Urban Myth. They’ll pull out a hand mirror and attempt to scare the other Sim by summoning the urban myth. The first time, you’ll successfully scare the other Sim. The second time, you’ll end up scaring yourself. If you attempt a third time while your Sim is still scared, the third attempt will scare your Sim to death.

To pull off a stink capsule prank, your Sim must be at level 3 of the Mischief skill. With Mischief level 3, click on a locker and select Plant Stink Capsule. When you prank a locker, there’s a chance it may backfire and stink your Sim, instead. They’ll get an Uncomfortable moodlet from being “self-stinked.”

If you attempt to prank another locker while your Sim still has that moodlet, the prank will backfire again but this time, your Sim will choke on the noxious fumes and die.

And there you have it! Two new ways to kill your Sims in the High School Years expansion!