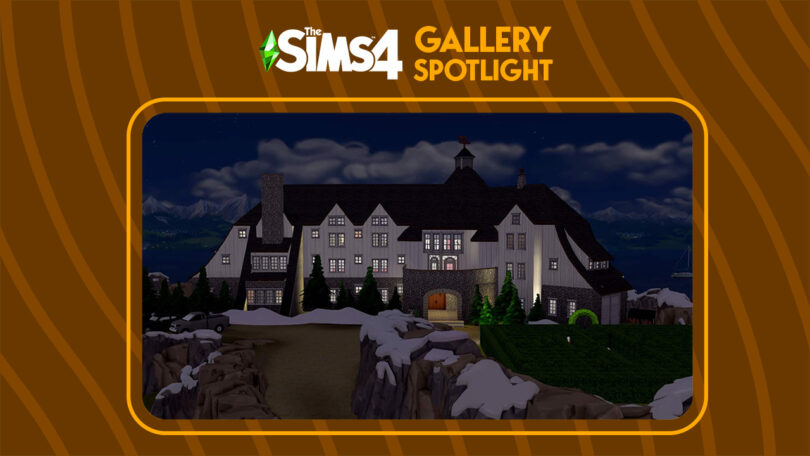 Spooky season is upon us and if you aren’t in the spooky spirit of the season yet, allow us to help you get the pumpkin spice and Halloween movie marathons rolling! Today, we have five spine-tingling, creepy crawly builds inspired by some of your favourite scary (and not-so-scary) films. From true horror like The Shining to morbid humour like The Addams Family, there’s something for everyone to enjoy!

Are you ready to see your favourite Halloween films come to life in The Sims 4? It’s sure to be a hair-raising experience!

This simmer has recreated the iconic home from the film, Beetlejuice! It looks exactly like the house seen in the movie and we are super impressed with the traditional Victorian architecture, here. The orange pickup truck parked along the winding driveway up the hill adds a realistic touch to the whole thing. And, if you’re interested in seeing the home after the Deetz’s renovation, simprincesstay also has that version available in her catalogue! Amazing!

We could not be more impressed with this Simmer’s recreation of the Overlook Hotel from Stephen King’s horror novel-turned-film, The Shining! There is so much detail! From the sloping roofs that touch the ground in many spots to the instantly recognizable maze that poor Wendy was chased through by her deranged husband, Jack, in the film. The snowy cliffs hugging the perimeter of the property is just the icing on the cake. Truly an authentic representation of the film.

This delightfully spooky build was modeled after Jack Skellington’s home from the classic 1993 film, The Nightmare Before Christmas, directed by Henry Selick. We can definitely recognize this as the Pumpkin King’s home from the crooked tower sticking out of the roof. The pumpkin lanterns framing the entrance to the home give the build the best spooky vibes. Halloween Town’s favourite entertainer and his faithful ghost pup, Zero, would feel right at home here.

Sistas! It is time! This amazing recreation of the Sanderson Sisters’ cottage from the classic family Halloween film, Hocus Pocus, has definitely put a spell on us! There’s no mistaking this iconic home, complete with a waterwheel enclosed by a stone wall. The interior layout is also very close to the film in stylistic accuracy. And yes, of course it includes Winifred’s sentient book and the black flame candle. *sniff sniff* Do we smell children?

They’re creepy and they’re kooky, mysterious and spooky! They’re all together ookie, The Addams Family! This incredible build inspired by The Addams Family home is packed with so much detail everywhere you look! There isn’t a single tiny spot of this lot that isn’t decorated in delightfully spooky fashion. It must have taken days to build but the effort was definitely worth it because we are in awe! The Addams Family would no doubt be proud to call this place their home! We’ll snap our fingers to that! *snap snap*