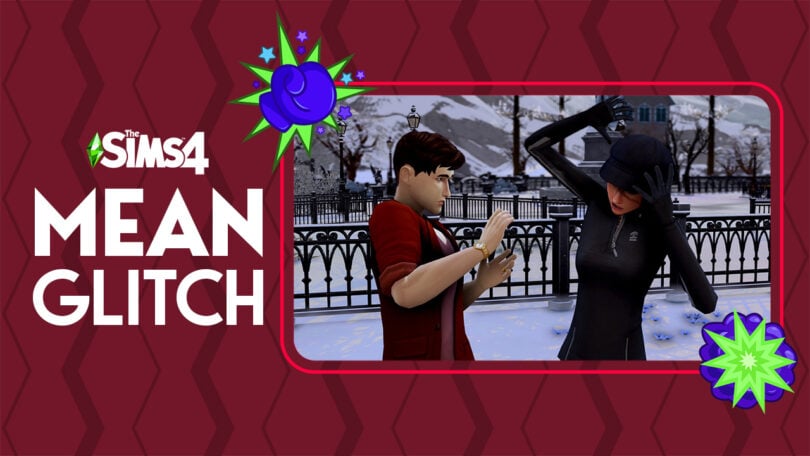 A new Sims 4 glitch is turning Sims into horrible people! Learn about this Sims 4 bug and how to stop autonomous mean interactions!

If you’ve noticed your Sims being meaner as of late, you aren’t alone! Since the last content update, thousands of players have been reporting that their Sims have suddenly turned into horrible people. They pick fights with their spouses, children, friends, and basically everyone around them. Of course, Sims are supposed to be mean to each other, sometimes. Some Sims have traits that make them act meaner than other Sims and all Sims can be provoked into being mean under the right conditions. But players insist the excessive meanness is a Sims 4 glitch. Autonomous mean interactions in The Sims 4 are a bug that’s gotten out of control.

So what exactly is the problem? According to players, Sims autonomously choose to do mean interactions with everyone around them for no reason whatsoever. Sims who have no traits that would encourage them to act mean will start fights with their closest friends and relatives even when they are not angry. There is no reason for the sudden rude outbursts and they happen so frequently that marriages are being destroyed and happy families are crumbling to ruin! A very troublesome Sims 4 glitch!

Currently, the bug has over 1,000 “Me Too” reactions on EA Answers and over 75 pages of players describing the exact same glitch in The Sims 4. Here are some direct quotes from the official Sims 4 bug thread:

I started having this too after the recent update (4/11). This happens in every household. When I let my sims have a conversation by themselves, they start yelling and insulting each other. Happens with teens, adults and elders. Haven’t tried with children yet.

i don’t have mods or cc, I just have city living, cats and dogs and cottage living.

I second all of this. The issue was NOT present before the patch downloaded today. I am on PS4 with Seasons, Cats and Dogs, and Desert Luxe.

This is also happening to me right after the update.  I even created a new game with a brand new sim, with good cheerful and neat traits, he will automatically do mean social actions during the welcome wagon event, for absolutely no reason. Also tested this with a brand new day one married couple with these traits, had them start a conversation and poof they both start arguing. This started after the update.  I have no mods or CC.  I have pretty much every expansion.

I’ve been playing The Sims 4 for 8 years now. This bug breaks all relationships regardless of the characters’ personalities and for no reason. Sims have become abusive.

As one player pointed out, this Sims 4 glitch is not only annoying but extremely concerning, especially for players who have experienced domestic abuse in their lives. Many people play The Sims to escape the realities of violence they may have experienced in the real world. A Sims 4 bug like this can be triggering and damaging to the mental health of some players.

With this autonomous mean interactions Sims 4 glitch affecting so many players and no fix in sight from EA, players have taken it upon themselves to find solutions to the problem. None of them are ideal, but here are some options to resolve the problem.

Want to stay up-to-date about Sims 4 glitches like these? Follow our news category for all the latest Sims news!